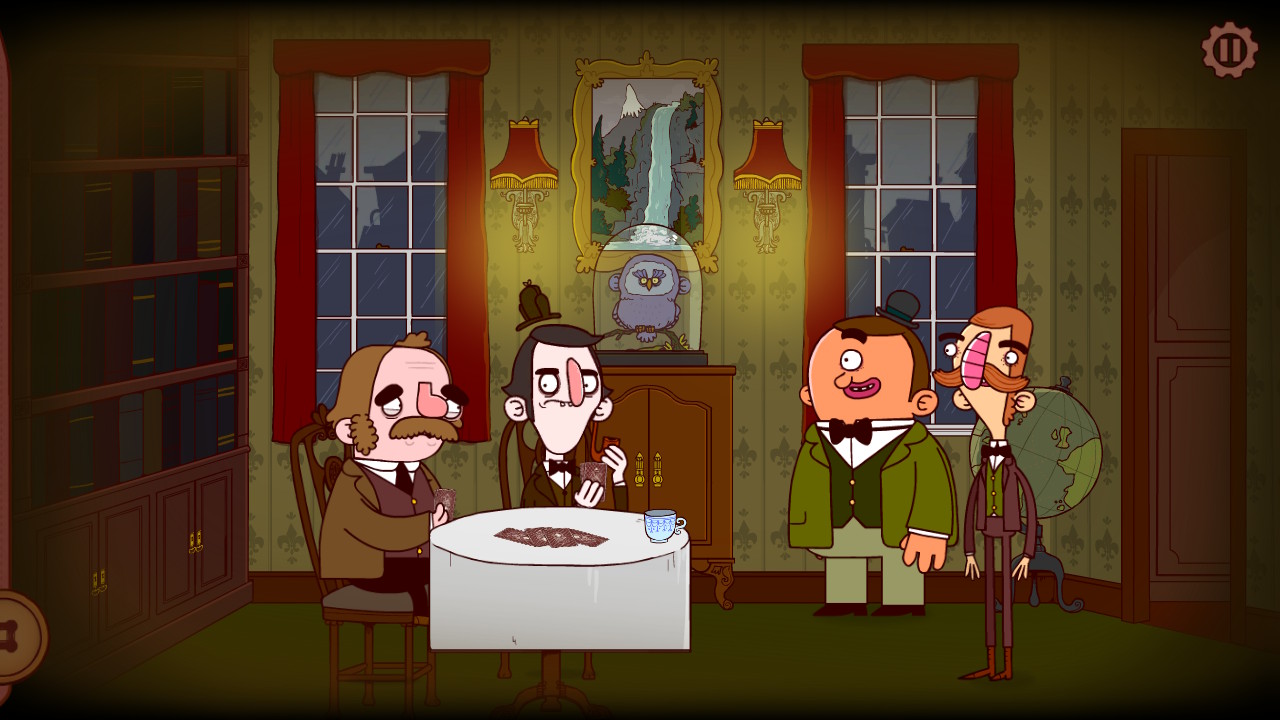 Not a week goes past without me diving into the Nintendo eShop’s lucky dip and pulling out another point and click adventure. The genre does feel at home on the Switch, and I’m pleased to say that Bertram Fiddle: Episode 1: A Dreadly Business is a lot of fun.

You play Bertram of the title; an eccentric what-ho kind of a chap who is an explorer by day and a novice detective at all other times in-between. That is unless his wife finds him a proper job. Employing a vocabulary that wouldn’t feel out of place in a Monty Python sketch, Bertram likes to invent the odd word or two. In one scenario, he introduces himself as a leading Victorian Explorator. But it’s ok as Bertram Fiddle: Episode 1: A Dreadly Business is set in the Victorian era, so using terms like peng would certainly feel out of place.

Our story begins when Bertram wakes up and gives us a quick glimpse of his life as an explorator through paintings, artefacts and anecdotes. Bertram is accompanied by his helpful servant, Gavin, who is introduced once Bertram unlocks Gavin’s bedroom door, hidden under the stairs. Gavin is a cyclops with an unimaginable strength that comes in useful along the way, whenever Bertram commands it. After a few back and forth quips about the shenanigans they’ve been up to in the past, Bertram’s wife tells him to take the dog to the groomers. Shortly after leaving the house, he bumps into a stranger and both parties drop what they are carrying. The stranger carelessly picks up the dog, housed in a carry crate and that’s when it all kicks off.

Bertram is an amateur detective and fumbles about like a gentleman Inspector Gadget. He soon finds himself roped into locating a murderer who bears a resemblance to Saucy Jack a.k.a. Jack the Ripper. Only the murderer has the much more imposing title of Geoff the Murderer, wanted for doing murderings. The theme isn’t for kids, but at the same time, it’s inoffensive, unless you get rocked by sexual innuendos and dad puns. Bertram Fiddle: Episode 1: A Dreadly Business is full of them. 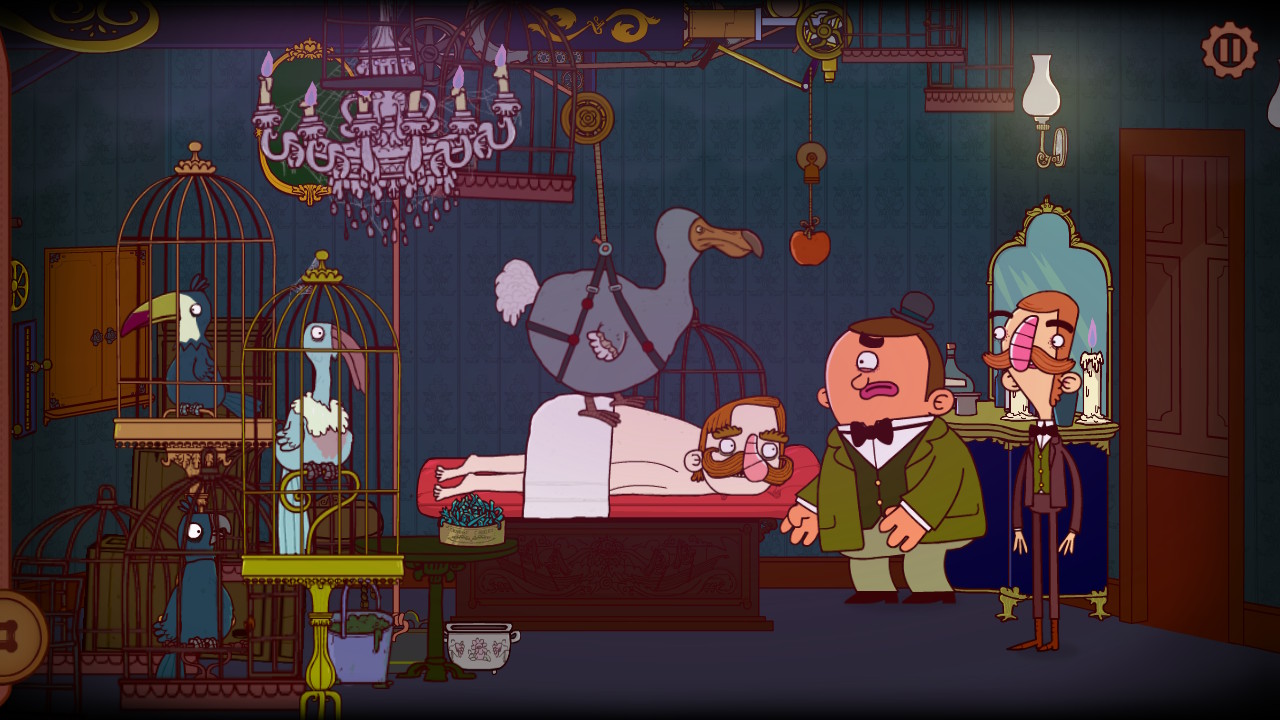 Bertram doesn’t break the fourth wall as such, but like any good adventure game, he’ll share his thoughts aloud and give a little exposition to the kind of person he is. Bertram Fiddle: Episode 1: A Dreadly Business is voice acted in its entirety and pretty good at that. But… I have to say that the voice for Bertram grated on me. He sounds like he’s inhaled helium and doesn’t sound anything like how I imagined. He’d sound better with a voice like Leslie Phillips (you might know him as the Sorting Hat in Harry Potter). I would say it isn’t that important, but as the main character, you don’t have much choice but to listen to him. Maybe you’ll like him more than I did.

The controls as what you would expect on the Switch; move the left joystick to move and select an item/character to interact with, plus an inventory off-screen that you can access at any time. With the amount of point and click adventure games I’ve been playing on the Switch, I’m now expecting these type of games to have a touchscreen option as it really can make the difference, and you need it here. For a while, I was fumbling about with the controls and had no idea what could be interacted with as there aren’t any visual clues. However, after some faffing about, I found that if you hold down the A button, you can see all the areas that can be inspected/actioned.

I can’t continue this review without praising the visuals. When I first saw the screenshots, I thought the illustrations were nice, but they reminded me a little of internet-based Flash enable games from the 00s – something similar to Penny Arcade Adventures (a fun game, but a little dated visually). Well, my opinion soon changed the moment I was playing the game as the illustrations are excellent, as is the animation. I recognised the style before and was trying to remember where I’d seen it. Rumpus Animation makes Bertram Fiddle. When I looked them up, it appears that they have done illustrations for Dorling Kindersley and Usbourne Publishing, hence why they seemed familiar as I had seen them in books before. It’s quite a quirky visual style and makes Bertram Fiddle stand out a little more than some of the alternatives.

I’ve already made my point about the voice for Bertram, but the rest of the voice talent is great too. The delivery of lines isn’t always the best, but as I had the subtitles up, I was reading along, and I have to say that the script is brilliant. It’s another game that is very British in the approach, and while it’s hardly crude, there are some classic innuendo’s throughout that are pretty funny. It’s probably the next step up in maturity from Nelly Cootalot: The Fowl Fleet, but with more adult themes; murder and sexual innuendos. While on the topic of the audio, the soundtrack is brilliant. It reminds me a little of British cinema – namely Ealing Studios and Hammer Film Productions in the 60-70s. How’s that for something modern? There’s no dub-step here. Is that still popular…? 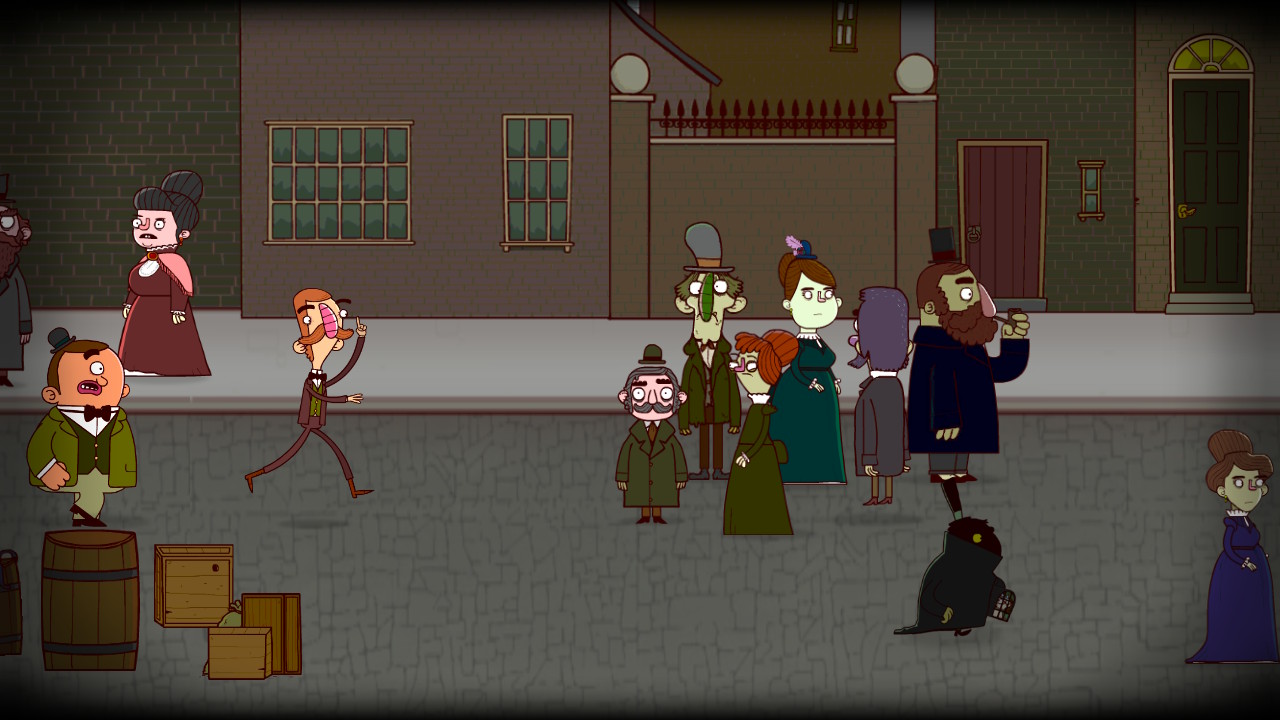 The story and gameplay, while short, are excellent but I have to say that I got a little irritated with the controls at times. I couldn’t quite get Bertram to do what I wanted him to do. Equally, it wasn’t that intuitive to get Gavin to follow suit, and I found myself dragging and dropping on the screen without either character doing what I wanted, i.e. interact with an object. As the game progressed, I became a little more accustomed to it, and it bothered me less. The challenges are varied and are what you can expect from any decent point and click adventure.

Bertram Fiddle: Episode 1: A Dreadly Business isn’t a new game. It was released on mobile devices way back in 2014, but it feels at home on the Switch and can feel that it has earned a place amongst some of the top point and click adventure games, even though the vast majority are ports and nothing bespoke for the Switch. In terms of difficulty, Bertram Fiddle: Episode 1: A Dreadly Business is relatively easy but entertaining. As you can expect to finish this in a few hours, I’d recommend getting Episode 2 ready as this first episode finishes on a bit of a cliffhanger.

The evidence is in the title; Bertram Fiddle is an episodic game. For an older title, you’d hope that there would be a complete package available like the Telltale series and you have access to all episodes in one go. When finishing this episode, it does have you wanting more so I’m pleased to see that the second episode is currently available on the eShop now so I’ll be looking at reviewing that soon. As for the price, it’s so cheap (in the UK it’s currently £2.15) so will be adding this to the list.

Overall, Bertram Fiddle: Episode 1: A Dreadly Business had me wanting more. Not so much of the gameplay as it’s nothing new and not much of a challenge, but the characters and dialogue are worth every moment. With characters such as Lord Arthwipe being introduced early on and puns that only dads can fully appreciate due to their cringe worthiness, I was impressed with the overall experience. I would have liked to have seen both episodes available in one go, but as I mentioned above, the price is peanuts so I’ll be giving that a go and continuing my adventure in this an amusing point and click.

Bertram Fiddle and his companion Gavin turn the Victoria era on its head and make a fun, but short adventure worthwhile in terms of the witty dialogue.

Undoubtedly the humour is the highlight of the game
That said, the visuals are also amazing
Easy puzzles, so no hair pulling

Yes, it’s episodic, but it’s still over far too quick
Not for seasoned adventurers who want a challenge (though the story is worth the playthrough)
I may be the minority, but the voice for Bertram was mildly annoying