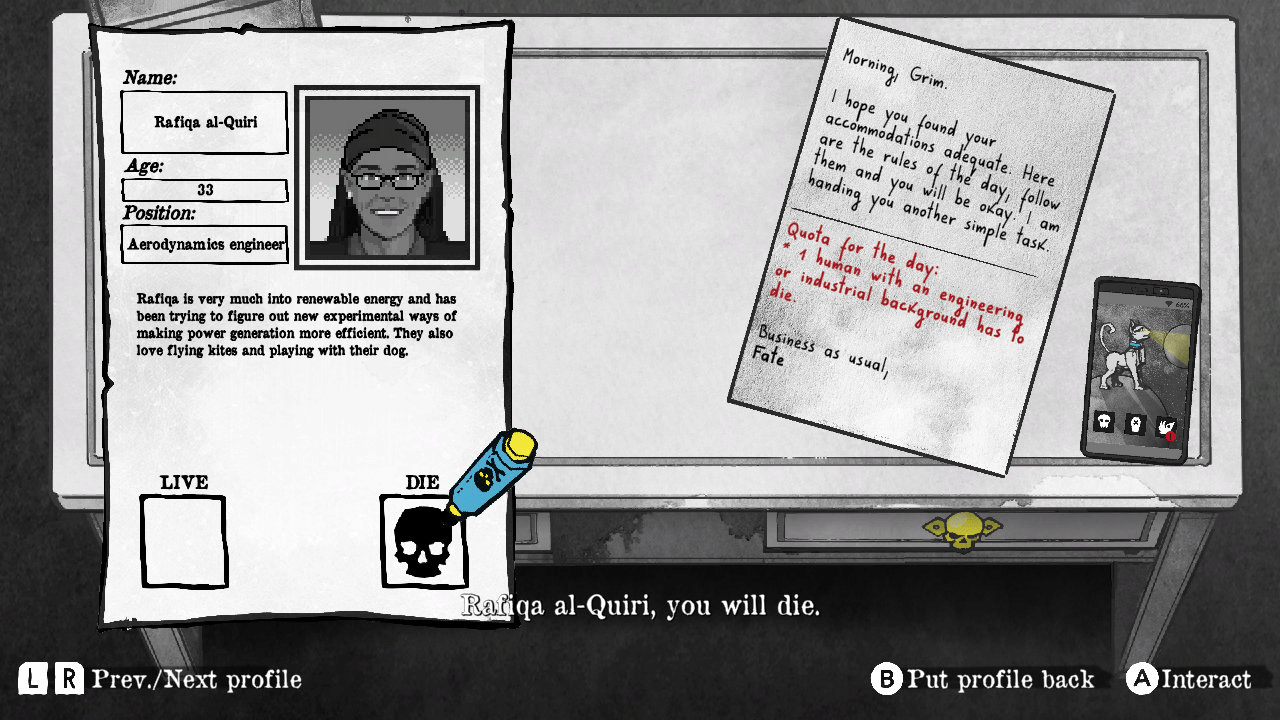 Under a sea of brightly coloured shovelware, the Switch Indie market is hiding some real gaming gems. One of such gems can be found in Death and Taxes, developed by Placeholder Gameworks and published on switch by Pineapple Works. This title relies heavily on narrative, player-choice and elements of the life-simulation genre. If you’re fond of dark humour, even deeper narrative design and all with charming 2D graphics – this bizarre life-sim is the game for you.

Death and Taxes has you surface as a newly created arbiter of death. A custom Grim Reaper who can choose who lives and who dies. Unfortunately for your playable character, this takes the form of an office job. You’re a grunt, a nobody, at the bottom of the death food chain. Your highest hopes, you are told by your stiff and prim creator ‘Fate’, is a place in middle-management. By making dialogue choices and choosing each day who lives and dies, the player can alter the course of the game and access multiple pathways and unlockable endings. Each in-game day sees you examining the potential lives you could end and choosing full-on-rebellion, compliance with the rules or a homebrew amalgamation of your own morality. 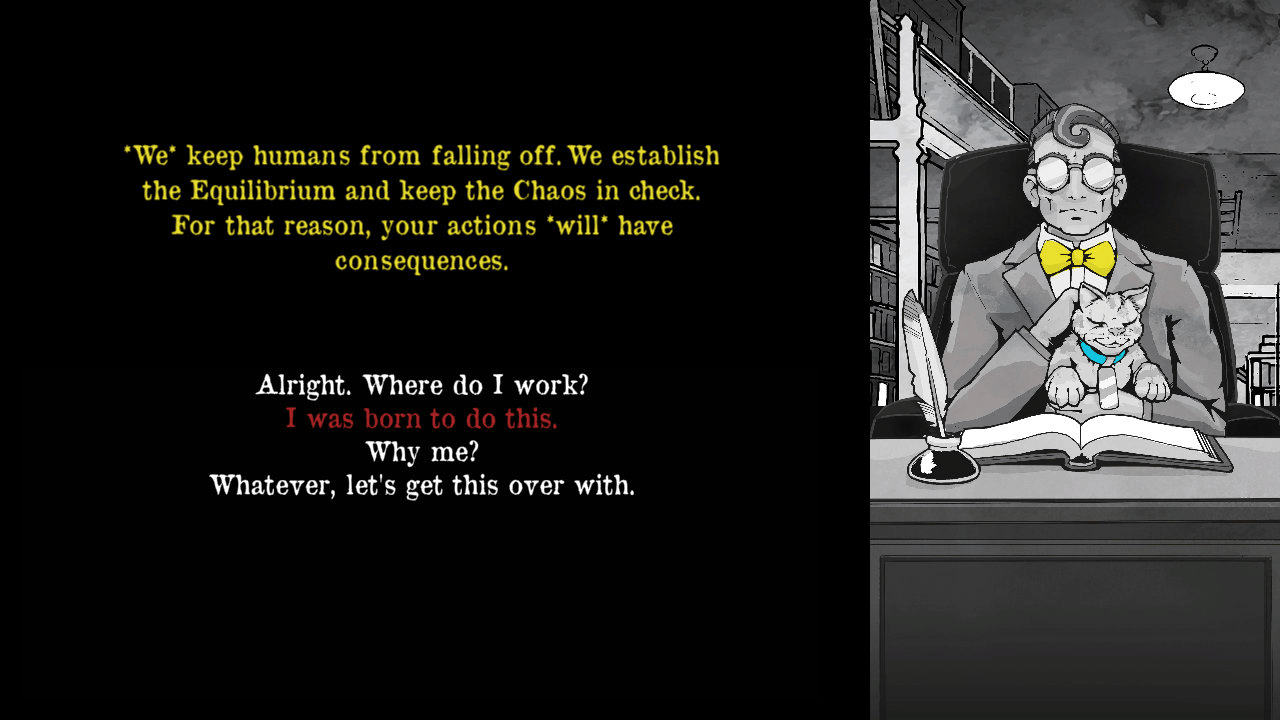 The narrative of Death and Taxes offers significant agency to the player, opening up a world of really interesting gameplay. Being able to weigh up different choices, aided by items you can purchase with in-game currency, you can get a better idea of how your world and the human world you affect coexist. Each choice feels like it matters which really makes this death-sim really immersive. Over multiple playthroughs, attempting to unlock multiple endings, I found early dialogue rather repetitive to go through multiple times. While small changes such as which number ‘death spawn’ you are referred to as made this less jarring, I skipped through this dialogue. The game could really add some extra length with some sort of patch or DLC, even adding some more pathways and endings could provide a wonderful rebate from the grave of a spooky game.

A stand out feature was the voice acting of Death and Taxes. This voice acting (isolated to the English language option only!) added something quite special to the game. It really infused the NPCs with a lot of life (ha!) and really enhanced the quality of this title. Fate, Mortimer and especially Lady Pawdington were developed wonderfully over all the plotlines and the voice acting made them feel like well-rounded characters. I think more indies should take this risk where appropriate. I especially liked Mortimer’s fourth wall breaks between and during playthroughs. He had a Sans from Undertale like quality to him (a high commendation from me!) and his stories felt genuine and a valuable addition. What the developers really seemed to put so much value in with Death and Taxes was the quality of every single part of the game. The characters have so much charm and it is a set of stories that will stay with me for a lifetime. So rarely does a game tackle such a topic and hit the nail on the head with quality every single time. 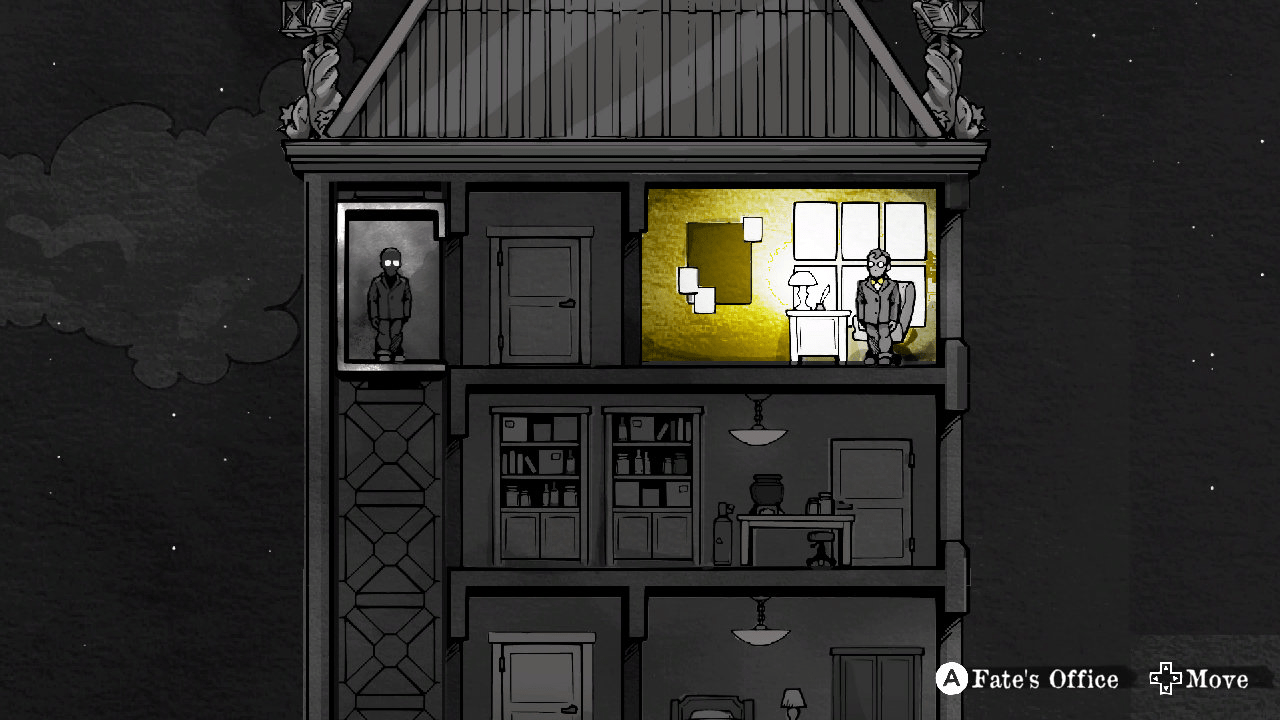 By far my favourite part of Death and Taxes was the 2D artwork. Complimenting the slice-of-life tinged with darkness soundtrack, the minimalistic design of the game really is a strong point. The menu screen is a UX (User Experience) masterpiece, being both original and quirky in its design but simple to use. I love the options for New Game+ and continuing from your in-progress save-file being made so very clear. Further, the ability to view what endings you have unlocked really aids the replay value of the title. I love checking whether I have gotten any closer to a 100% run. My favourite artwork was by far that of the elevator. Being able to see the ‘run of the mill’ office, accompanied by slightly spooky elevator music, was such a thrill. Knowing that you were a force for change (either good or bad) and that you still had elevator music and a nagging boss who is literally stroking a cat in a big office chair -what an aesthetic. With hours of fun packed into this little indie, you can definitely get a lot of charm out of this recent Switch release.

Death and Taxes, with some add-ons/patches or future DLC and some more mainstream attention, has Undertale and The Magic Circle level potential. I hope my review can even do the smallest bit to help it reach such acclaim that is deserves. With well-written characters, a thoughtful story and a challenging yet accessible content, Placeholder Gameworks have really made a game I would play ten times over (and have already!). If you are a fan of metanarrative, quirky gameplay and unique experiences which pop up and disrupt the expected events of a game when you least expect it – give this game a try. For a condensed experience that will have you laughing in the middle of an existential crisis, my only real criticism is that there isn’t more of it! This game refuses to just be a story, or just be a good game – it challenges the player’s own moral code. Do you ‘win’ or do you make a change?

The only thing guaranteed in my life for the next few weeks is certainly Death and Taxes.

Never has an office job been so appealing. Take the place of the grim reaper and decide who lives and who dies in Death and Taxes.