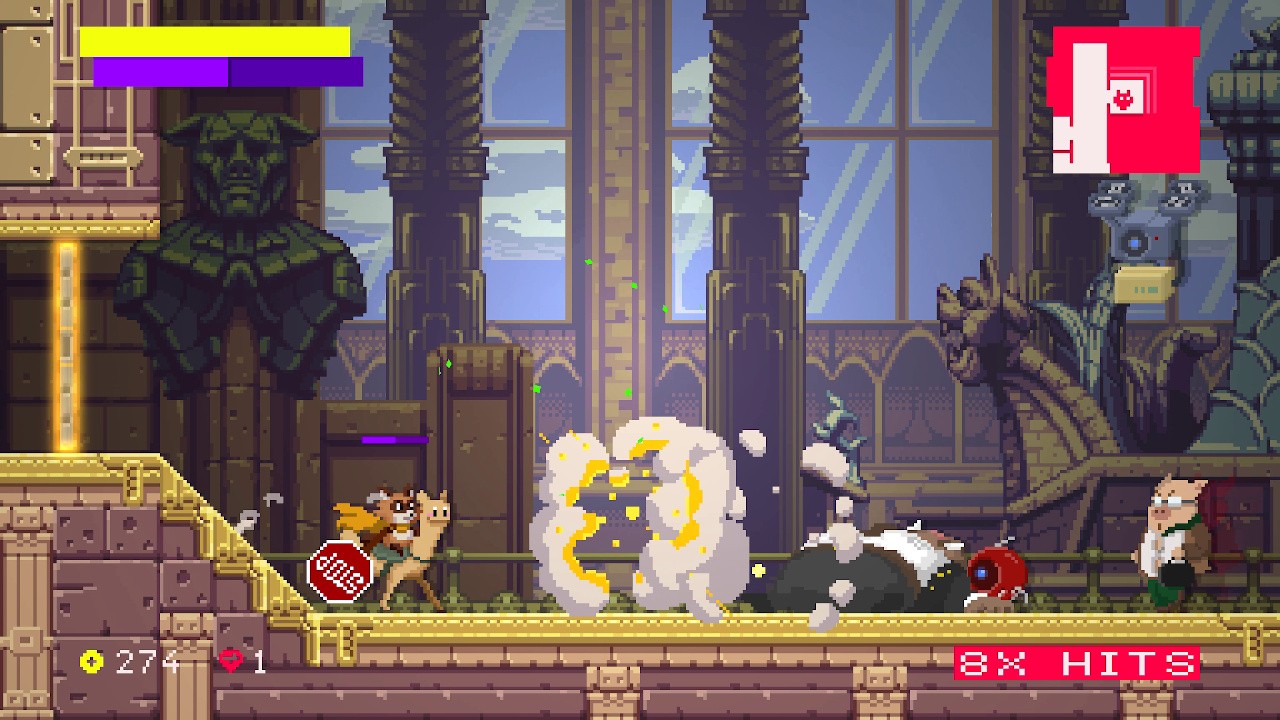 Did you ever hear the tragedy of SuperEpic: the Entertainment War? I thought not. It’s not a story Undercoders would tell you. It’s a Nindie legend. SuperEpic was an indie game that was so on brand, it sought to use careful pixel designs and undertones about the gaming industry to move itself into the top sales slots. It had such a good aesthetic, it could make a llama sidekick seem fresh and not dated. The use of random tropes and 4th wall humor is a pathway to many sales that some consider to be unnatural. It eventually became so meta…the only thing left to do was to imitate itself, which, rather suddenly, it did. It made fun of mobile gaming, and then mobile gaming killed my interest in the game. Ironic. It could see the flaws in the market, but not in itself.

From the drop, SuperEpic feels like it will ride the line of enjoyable or eye-rolling, and, for the most part, it’s able to keep in the respective “enjoyable” lane. In a dystopian future, RegnantCorp is an all powerful company that keeps the populous enslaved through free to play smartphone games. The people don’t even know they’re being kept in this cloud of ignorance because they refuse to put down their phones and see the darkness around them. Thankfully, there is a resistance movement, those who continue to play games offline on televisions, hidden far away from the all-seeing eye and merrily enjoying “real” gaming. One day, our hero, TanTan the Racoon, is playing some old school games with his faithful llama, Ola, when they get a message from some pirate broadcast. It’s time to finally take down RegnantCorp and free both the people and the games as we know them! Riding on the back of Ola and wielding literally any weapon that can be found, TanTan is ready to strike back and make this world gaming friendly again! A hero is you! 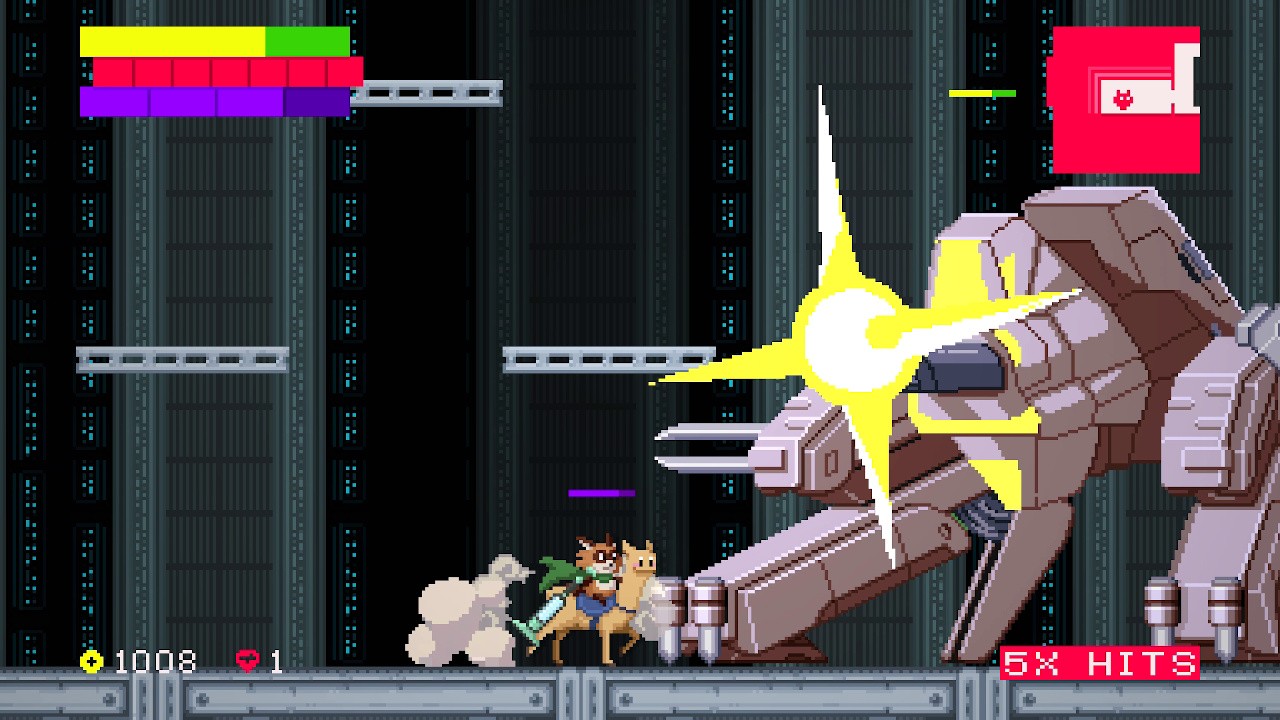 As a metrovania styled game, SuperEpic: The Entertainment War moves forward in the ways you might expect. You need to hunt through the offices and halls of RegnantCorp to find keys for unlocking doors, additional resistance fighters to aid you with supplies and powerups, and new abilities that let you go boldly where you hadn’t been able to get before. There’s an elevator system that is unlocked later on that allows you to fast travel to old areas and find things that were previously inaccessible. There’s dash, double jump and other dope skills that are gradually impressed upon you and makes for a stronger and better racoon/llama pairing that all the corporate animals should fear and run from. Bosses help to separate the areas, with most (if not all) of them being easily tasked as long as you’ve been following along with the core mechanics of the game, which is to kill everything on the screen over and over, get a ton of cash, and max yourself out before moving on.

With SuperEpic, you’ve got three weapons, and each is interchangeable (both for looks and for stronger abilities as you move on), and each has its own sort of special spot. One is a straight on attack that can be chained quickly to do fast damage, the other is a light “launcher” attack that sets up some great juggling, and the last is a “strong” down attack that takes a moment but lands like an anvil. Personally, I never bothered with this last attack, as jumping over enemies, launching them, and then beating the hell out of them worked for roughly 85% of the common mobs. Instead of EXP, all of the monsters (which have a long, delightful collection) drop cash that you automatically collect, and this money is then given to the resistance members who are peppered throughout the map for upgrades. You can improve your weapon to make it stronger, occasionally buy brand new weapons, or even buy improvements to your core bars, like the health and stamina bars. The game is fairly generous about dropping health items every so often, and your stamina improves quickly enough, so you don’t need to max out your stats as fast as possible, but it certainly never hurts.

Once you get into the game, it’s hard to dislike SuperEpic. The writing is sometimes a little too on the nose in terms of “real games good, fake games bad,” sort of mentality, but it’s not overwhelming and they keep everything fictitious, making sure not to name names. While some of the needlessly “on the nose” exposition from TanTan can be a tad grating, nothing directly affects the real quality of this game. The levels are built in such a way that you can really explore and easily miss some rooms or items that you won’t have a chance to get till later. The controls are incredibly tight, and I had zero problem with navigation. I liked the use of toilets as the save points for the game, because it made sense and didn’t seem like needless juvenile humor. Additionally, with the mobile sleep mode of the Switch, it was very easy to jump in and out of the game without really worrying about saves. In fact, save for the one, big, GLARING issue that I have with SuperEpic, this could have been in my top ten of the year for indies. 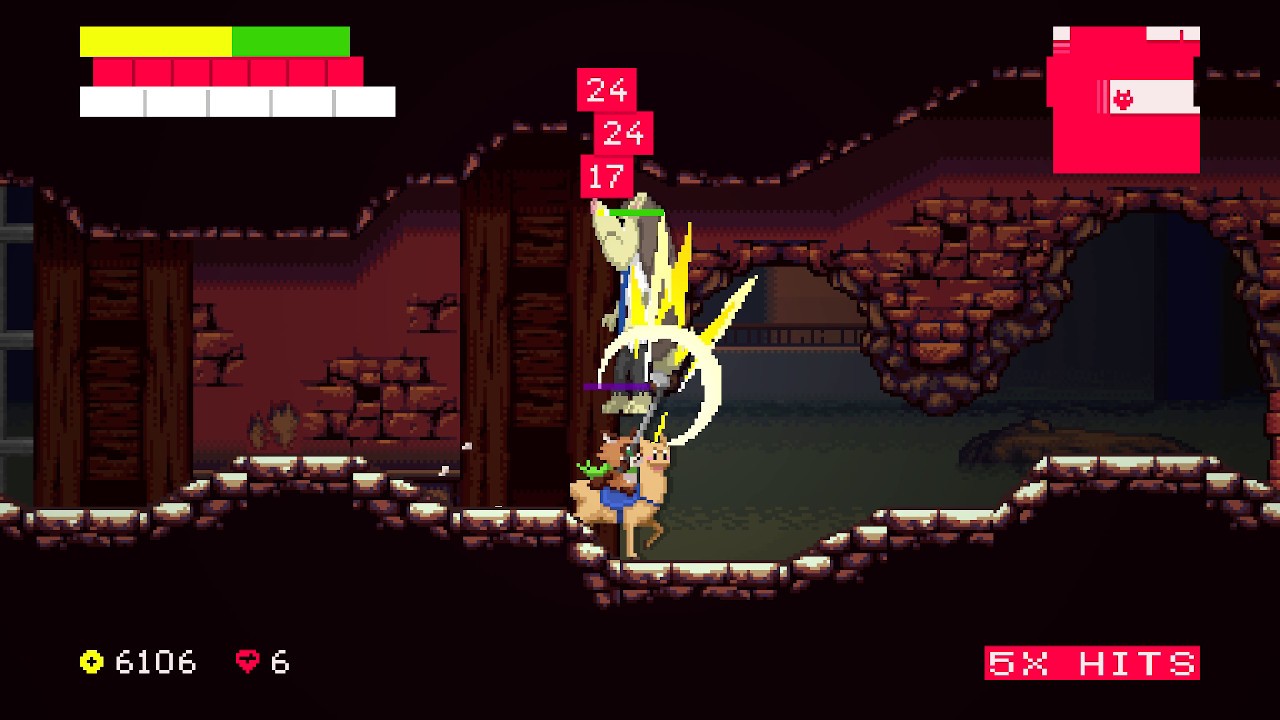 Numskull Games decide to take things a bit further with the meta of the game and have several rooms that are locked up with numeric keycodes. There isn’t a way to find the password anywhere within the realm of SuperEpic, at least not in the traditional way. An NPC isn’t going to tell you the numbers, or you find them on a piece of paper, that’s not happening. Instead, you’ll notice that a painting of a QR code hangs in the room with the combination lock. You need to scan that QR code with your phone. The code reveals a URL, and you need to go to a fake website that’s been set up to imitate RegnantCorp’s own work website, and then you need to beat a mobile game in order to get the code. More specifically, you get the score, then hackers break into the game, and you get the code. This is something that’s pretty meta in and of itself, and would have been perfectly fine in a single dose: clever, referential, but not too repetitive. Instead, though, this gimmick happens again and again. You keep finding rooms with treasure chests and the only way through is to beat a Flappy Bird clone. Then you find other rooms and you scan a QR code to make some kind of fake crypto-mining account, and you can get cash this way, but what the everloving hell? The point of this game, the actual statement, is how you need to unplug from your smartphones and get back to “real” gaming, and then, at least once a level, I need to bust out my phone to play into the fake atmosphere of the game? Even if the items aren’t mandatory for moving the story along, it’s so blatant in trying to be clever it doesn’t realize how stupid it’s being.

SuperEpic has some truly great moments of functionality and fluidity that makes the actual game fun, and I can’t dispute that. There’s good controller movement, there’s a lot of upgrade options, the action is solid, the boss fights are fun and the whole thing doesn’t take a massive toll on your time in order to get the full experience. The QR codes thing, though, just rankles me to no end, and it’s a petty push to add another layer that totally detracts from the game. The music…it’s just odd. Like, royalty free or not, hearing the Book Off theme play as soon as you walk into the elevator really took me out of the whole experience. If you wanna play it because it’s a cool game, play it, go right ahead. But I’m seriously not a fan, and I don’t think the approach makes it clever or witty when you get right down to it. If I’m holding my smartphone while playing a video game, that’s the opposite of what I want to do to enjoy myself.

There’s nothing sadder than a game that gets positively shot in the foot by something that didn’t even have to be in the game in the first place.