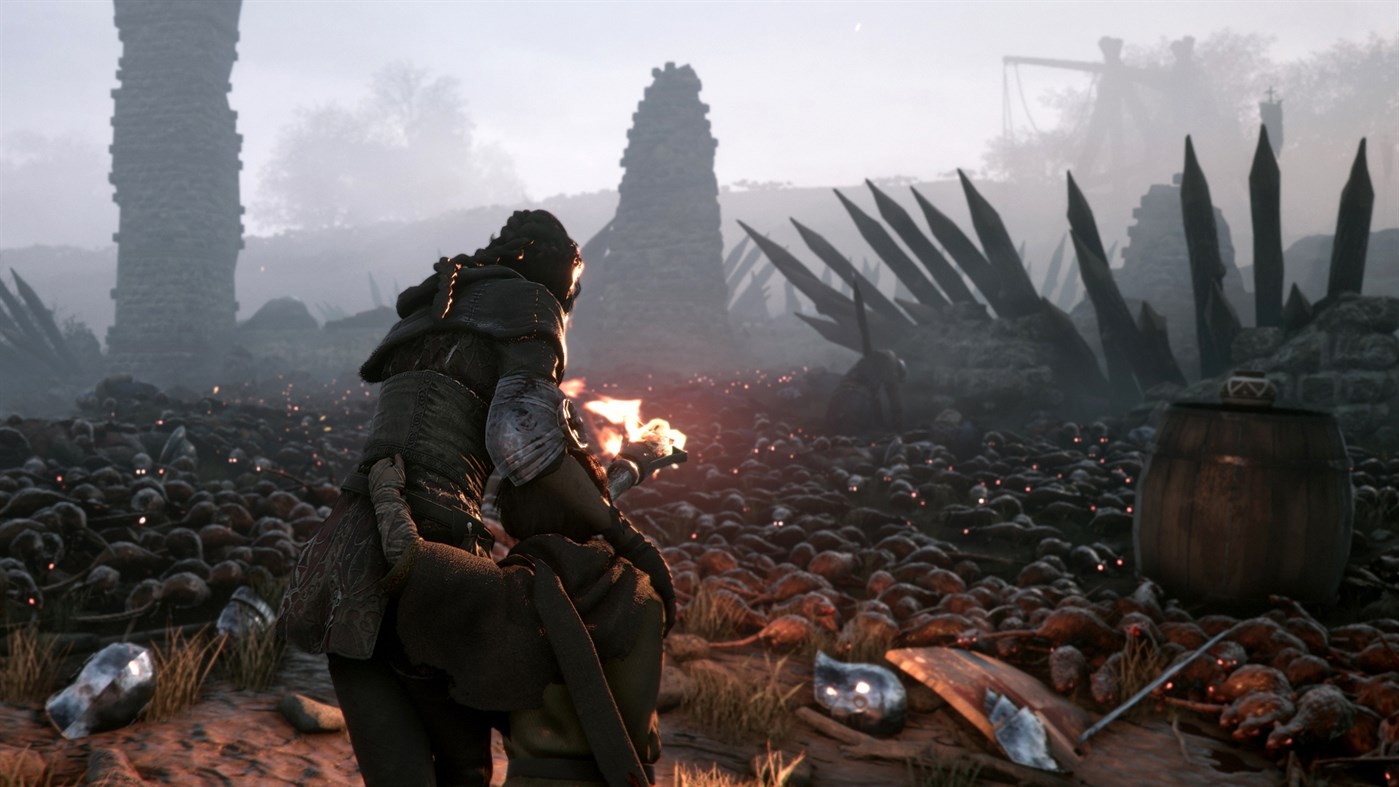 Set in 14th century France, A Plague Tale: Innocence takes place in unusual territory. The setting is one of the most interesting aspects of the game — the backdrop is well-built and fascinating, but sometimes to the detriment of the linear structure of the game. This is another companion game similar to that of The Last of Us, and more recently 2018s God of War. As with the two aforementioned games, its main strength is demonstrated in watching two characters grow and build a relationship with one another. In this case, those two characters are the De Rune Siblings, Amicia and Hugo. However, in comparing A Plague Tale: Innocence to the great companion games of the past, it’s noticeable that the gameplay is far less interesting or creative, relying on stale stealth mechanics, giving the player little freedom.

A Plague Tale begins with Amicia De Rune, a french noble, out walking her dog, Lion, with her father, Robert De Rune. (It’s worth noting that you can pet Lion the dog, which is an ever-growing demand in modern gaming.) It’s the classic ‘too good to be true’ kind of situation, which unsurprisingly doesn’t last all that long before things begin to take a turn for the worst. It’ll come as no surprise that Lion is, sadly, the first victim of the plague. Once Amicia and her father arrive back at their estate after witnessing the loss of their pup, things really begins to kick off. The Inquisition invade, forcing Amicia to run with Hugo, her sickly younger brother. It quickly becomes clear while escaping the estate that Amicia and Hugo don’t really have much of a relationship. Hugo had been kept away by himself, only really ever seeing their mother, which has also caused Amicia to feel jealous of her younger brother. Watching the two orphans grow closer is the best part of the journey. In the beginning, Hugo is very indifferent towards Amicia, just wanting their mother, all the while Amicia is trying her best to deal with their loss, protecting Hugo, the brother she barely knows who suffers with a unique medical condition. 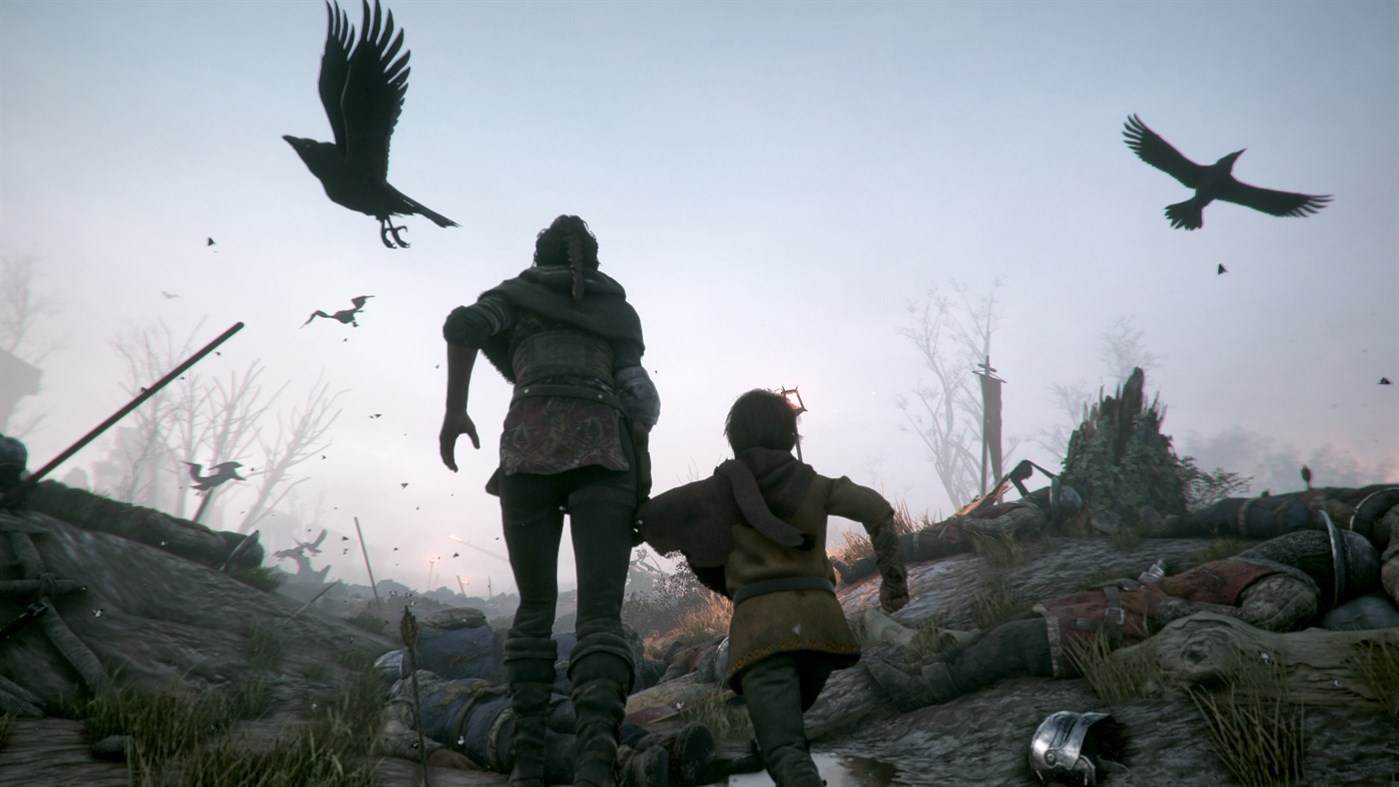 The earlier sections of the game are when the gameplay feels most lacking in originality. At the beginning of their journey, it’s a lot of sneaking past guards when they are looking the other way, or throwing objects to misdirect and distract them. A fifth of the way into the game are when things begin to ramp up, when the plague is introduced. In a Plague Tale: Innocence, the plague comes in the form of rats (unsurprisingly), but not just a few rats knocking about from time to time — hundreds of them! Often they burst out of the ground like a rat-fueled geyser, with your only ally against them being light. These moments when they burst out of the ground can be truly terrifying, especially when you aren’t close to a lamp or flame, forcing you to run with Hugo in hand to the closest possible safe location.

The reason why the addition of the rats makes the game more interesting is because very little can stop them. The rats will chew through anything, including armored inquisition guards. Your biggest tool in the game is often the biggest threat — the rats themselves. All too often they are the answer to getting past certain guards, whether it be by extinguishing a light nearby them or luring them to a useful spot, eliminating both the threat the guard poses and the threat of the rats, as when the rats are feasting on the flesh of some poor soul, they are not a threat to you. This tactic can cause some horrifying moments, none more poignant than when you have to lure a pig to its unfortunate demise, all the while Hugo is cheering the event as he thinks you’re feeding the pig his supper, as opposed to what is actually happening. Nearly everything you do is witnessed through the eyes of a five-year-old. It adds a charm and innocence, but seeing it through the eyes of a child adds a level of doubt and conscience to your actions. Nothing displays Hugo’s innocence more than his love of flowers. A unique flower is found in each chapter, and each time Hugo takes the flower and puts it into Amicia’s hair, in what is one of the nicest touches I’ve seen in a game, showcasing the love the two characters share for one another.

Across the seventeen chapters of the game, you primarily play as Amicia, whose only tool is her trusty sling. At the beginning, all Amicia can fire out of it are rocks until you meet more people in the story who teach you different concoctions to make with alchemy. As you get the new abilities, whether it be something to extinguish flames with or a lure for the rats, they are never more relevant to an area than the one you’re in. You can still use them at other times, but the game pushes you in a certain direction, adding very little freedom to how you approach situations. When making projectiles, you use up materials found throughout the game but there is no real demand to conserve your resources or approach situations tactically. If you need a certain material, the game will present it to you when you need it. There definitely is good potential for a harder setting with more limited resources, adding more of a survival aspect to the game which would be a perfect fit. The sling and your other equipment can be upgraded but once again, it’s really not very deep. If you upgrade nothing you can still get through the game with relative ease. 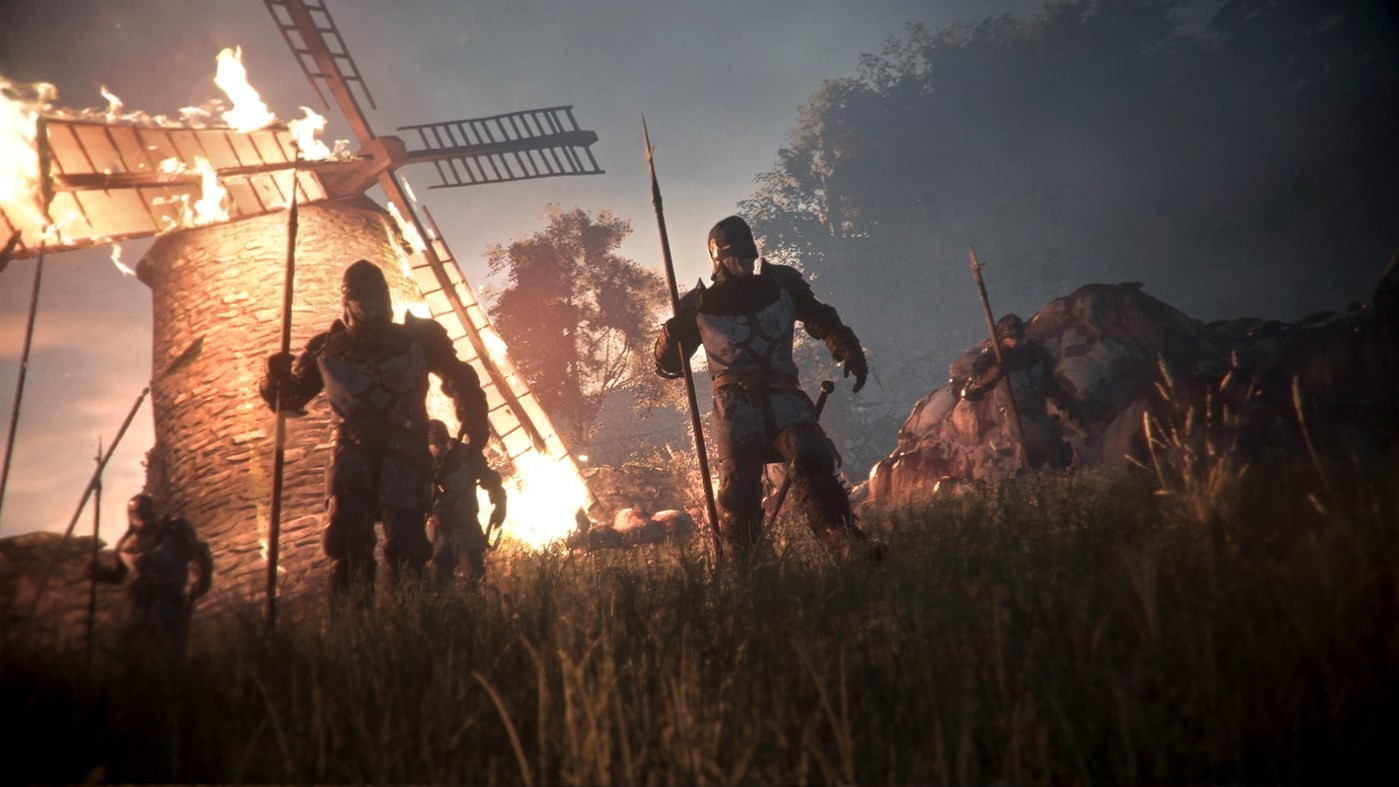 Throughout A Plague Tale: Innocence, Amicia and Hugo meet a variety of allies, ranging from a pair of thieves to a blacksmith’s son. During certain chapters they will aid you, adding different abilities to your arsenal depending on who you’re joined by. All of the characters have their own reasons for disliking the Inquisition, hence why they’re willing to help Amicia and Hugo as they’re being tracked down. One of the strongest parts of the game is how well-performed the dialogue is, especially Amicia’s and Hugo’s. The voice acting is well-delivered and believable. What also deserves praise is how the whole game is performed in French, German and English. (I would recommend the French version with subtitles as it feels more appropriate and natural, and at times the English version sounds a bit like ‘Allo ‘Allo!.

There are four main pillars to the plot of A Plague Tale: the relationship between the two siblings; why the inquisition are hunting you; the plague of rats; and the health issues Hugo faces, the curing of which is the main driving force for Amicia. These story beats are all connected, causing for a lot of intrigue on the journey. The story combined with its performances is what truly makes A Plague Tale: Innocence memorable once the credits roll. Its world is stunning, even if the rats look a bit mad when there’s a lot of them on screen at once.

A Plague Tale: Innocence proves itself a compelling journey despite sections of the game relying on monotonous stealth.

Little freedom on how to approach different chapters