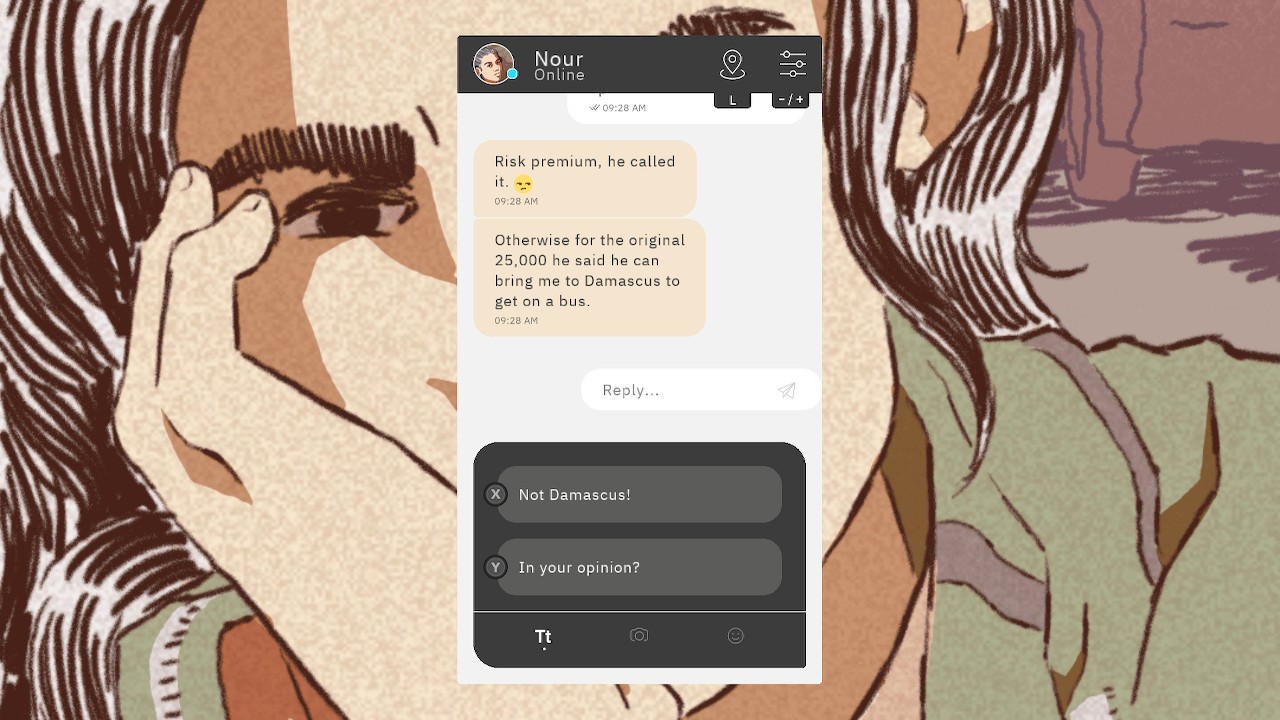 Once again, we face the terrible and perilous divide between games as entertainment and games as art. As we move further and further into the 21st century, it becomes important that we treat the medium with the same gravity that we give to the others. That is to say, those who are deeply moved by Wings of Desire will not necessarily find joy in City of Angels, but you can respect that the two fans are separate yet valid in their interests. So when a visual novel sort of game makes a splash into the eShop world, but clearly is leveraging tones of human interest and contemporary events, you need to analyze it from all directions. What is the story being told? Does it properly convey the message it wants to deliver? Is there enough mystique to outweigh the very real and very missing gaming component? It’s a tenuous line, and very difficult to walk overall.

Bury Me, My Love, which comes to us from The Pixel Hunt via Plug In Digital (and some very helpful additional work by ARTE France and FIGS), is a very ambitious title that attempts to capture a story of romance, struggle, terror and a bit of the neverending strife that is affecting Syria. It’s a tale about Nour, who is making her way across Europe to try and find a safe place to live, while her husband, Majd, remains behind in Syria, sending advice and suggestions along the way. Naturally, there isn’t going to be a good way to video chat these suggestions, so the entirety of the game takes place through the display of a text messaging interface, and you, for better or worse, can only do pre-written, this-or-that responses. These responses will help guide Nour in her choices (though she will generate plenty of ideas of her own), and, ultimately, will lead to one of several endings for this star-crossed couple. Spoiler warning: it’s the tale of a refugee woman trying to cross Europe on her own without proper paperwork or any connections. There will be bad endings, and some will be worse than others. 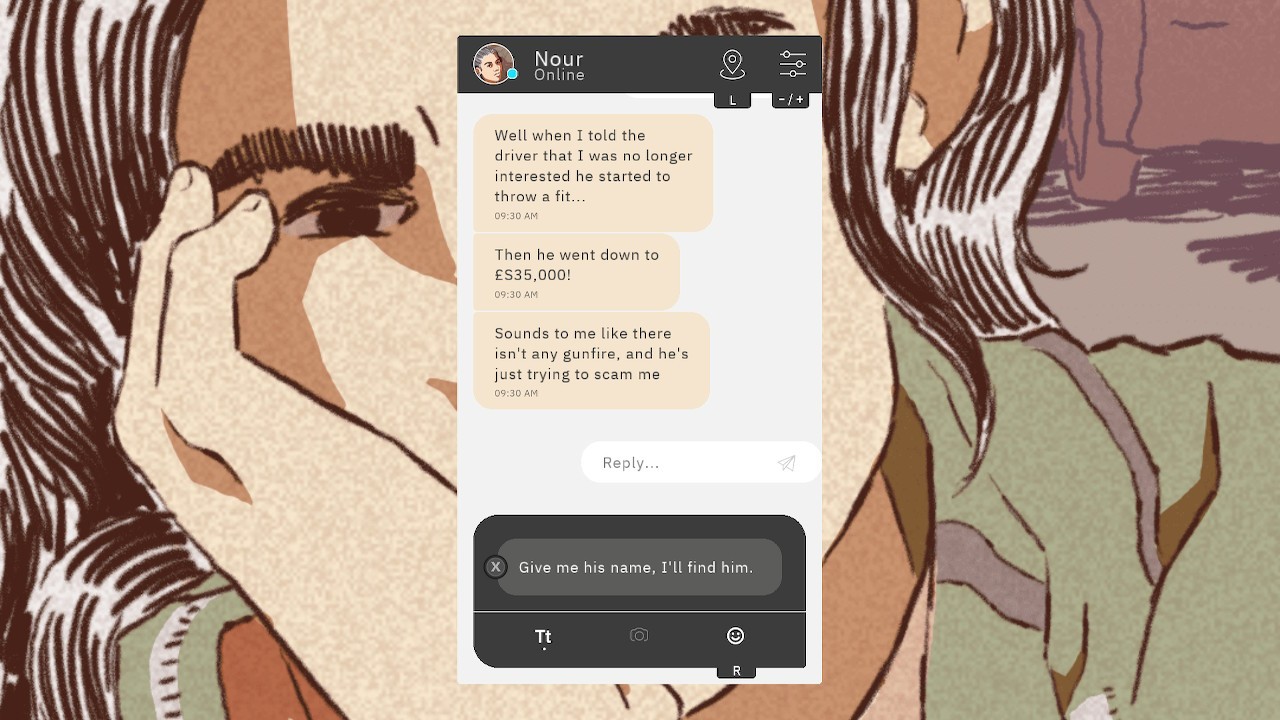 The approach and display of the game is ultra minimalistic, focusing on the smartphone display and the occasional photo that Nour sends to you from the road. In this sense, Bury Me, My Love manages to do a good job of capturing the proper mindset of the game and it’s attempted storytelling. You really are helpless to do anything outside of read and send messages, so, when things are going badly or it seems like there should be another choice, Majd has no choice but to read and hope for the best. Clearly, this game strikes the same chord (in presentation) as that of the iOS title Lifeline, where you were at the mercy of waiting to see what happens rather than really mastering control of things. To their credit, Nour and Majd tend to write back and forth much faster, but there’s still plenty of times where you’re forced to wait on tenterhooks for what Nour will say next. Also, due to the stylistic choice, you’ll sometimes get one word at a time, which irked me if only because that’s not how I send texts.

What’s crazy is that Bury Me, My Love swings wildly with tonality, at least from my perception. There’s this attempt to normalize the situation between the two lovers through banter that never deviates too far from the serious plotline, but still feels like attempts at brevity in order to make life seem a bit better than it is. Don’t get me wrong, the connection that Majd and Nour have for each other is very real, but why are there constant emojis? Is this my “old man yells at cloud” moment where I finally feel totally disconnected from a certain generation? When someone tells me “I just stole a passport and a bunch of cash from someone trying to help me,” my reaction would be a bit stronger than a horrified facial expression. When things are good, they’re great, and you can appreciate the lightness of their chatter, but, when things go bad, it gets crazy bad. With one terrible ending, Nour is clearly running from something that does not wish her well (I don’t want to spoil it too much) and Majd is sending her messages every four seconds to try and get her to respond. When I’m being chased by anything, the last thing I want is my phone blowing up and either buzzing like crazy or, worse, playing a bunch of notification chimes to make me easier to track and find. Then, when you get an ending, you aren’t delivered the news via text: Nour leaves you one last voice message that often conveys a whole bevy of sadness, fear, anxiety, maybe hope, and that’s the end of the game. Where was this tonality for the entire game? I think that hearing the characters gave a better connection than previously had. 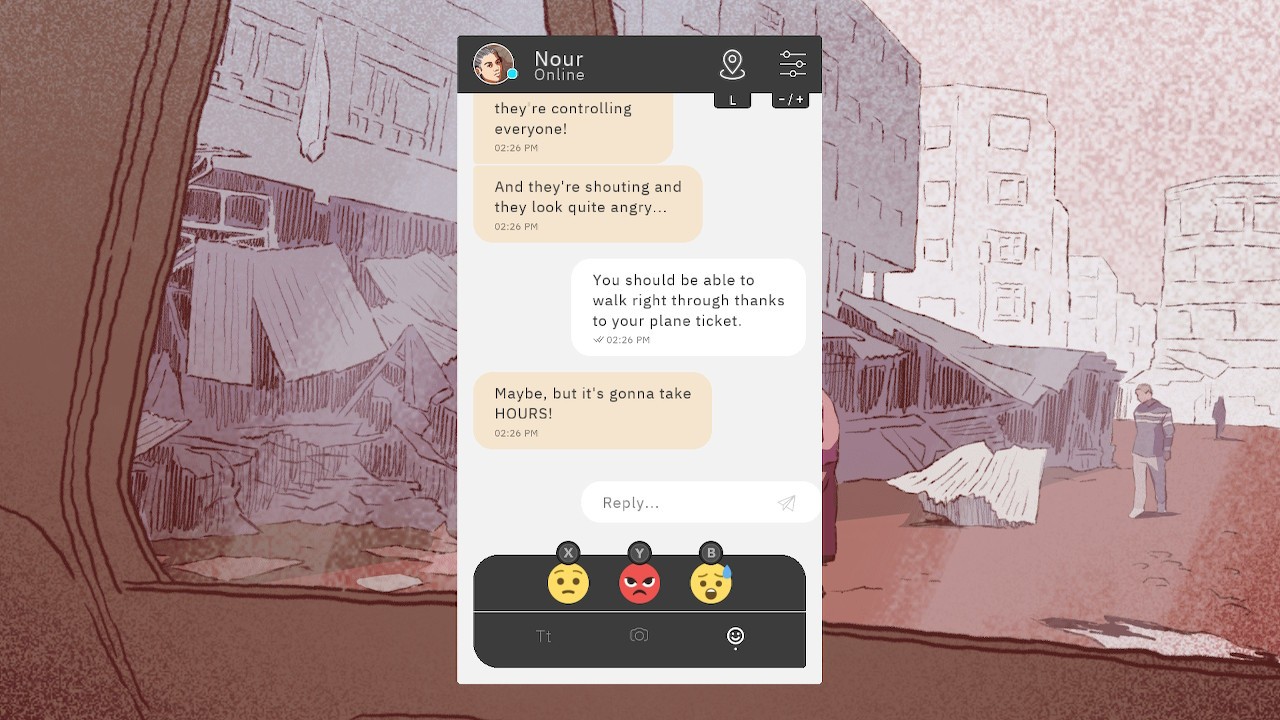 It’s an interesting experience, and Bury me, My Love does a great job of allowing you to drop in and out of the game with very little preamble. There’s autosaving that constantly makes sure you can pick up on the journey after closing and reopening, which gives a bit of immersive element to the game. If things go south and you “lose,” you can always restart the journey and try again. The number of choices that you make throughout is plentiful, though it can make going back to try and find more results a bit difficult as a result. Also, due to the nature of the game and the subject matter, going back to try and get additional endings is a daunting task. Honestly, if you’re lucky enough to get a good ending off the bat, I say just let it lie. For some reason, letting people try again after getting murdered by ghosts or falling in love with the wrong time traveller is much easier to stomach than, say, definitely becoming a part of human trafficking. In focusing on some subject matter that’s a little too real in today’s news, it might cast a light upon the Syrian situation, but it makes it borderline masochistic to try and get replay out of this title.

I am not aware, to the full extent, of the war in Syria and the repercussions it has had on the people living there and the surrounding nations. Some people are very complimentary of Bury Me, My Love and the story it tells, while others are condemning and angry that it isn’t more serious and more visceral to better highlight the horrors happening. All I know is, at the core, this game delivers an interesting and engaging storyline with two characters that are likeable and believable. There’s a bit of replay value, and there’s something to be learned after all is said and done. I wasn’t a huge fan of the style of storytelling (again, emoji), but it was believable, and is the only way a story could be done. For a few bucks and potentially some tissues, Bury me, My Love is an interesting, if sad, portrayal of two people, and however true it might be, it certainly tugged on the heartstrings.

Bury me, my Love Review

In a digital age, the only connection we might be able to forge with a loved one could be rather cold, but essential, to our mutual survival.