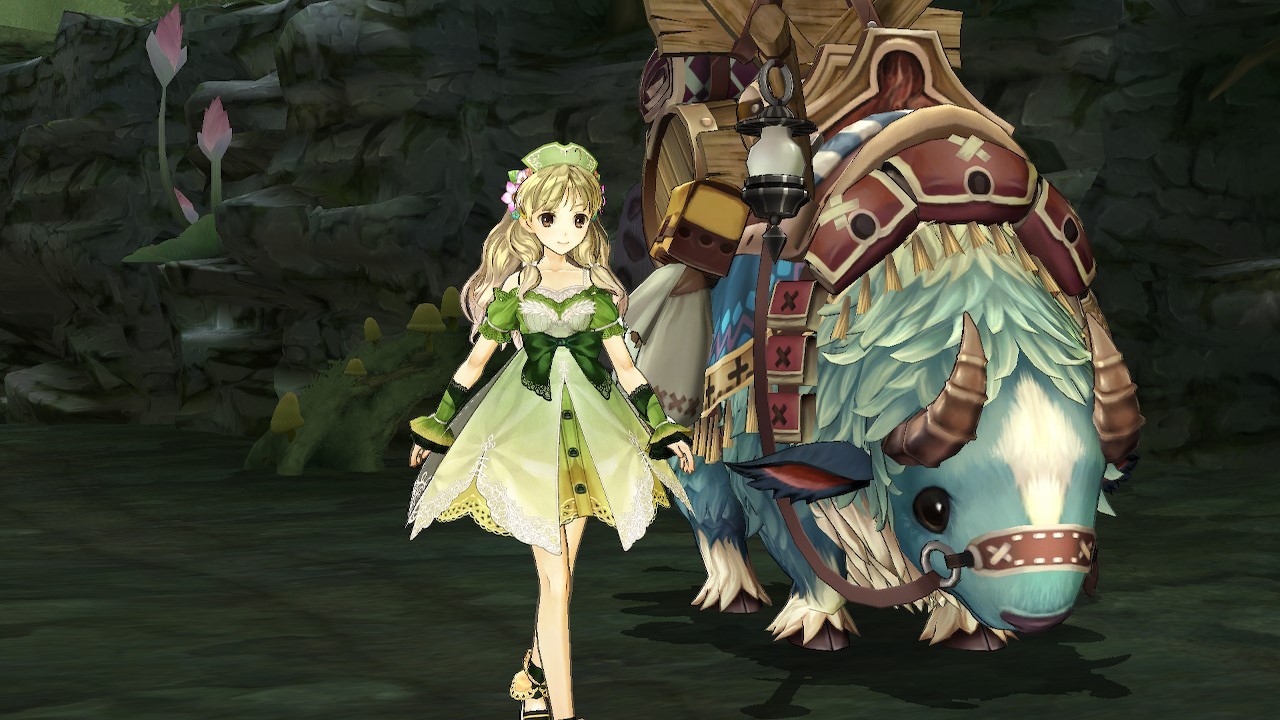 What does it mean to feel loss? For everyone in this whole world – this terrible, beautiful world – we will be united by the idea of losing something. From family to friends, opportunities to wealth, time to food, humanity must suffer at the hands of the universal constant: things are lost. If you are truly lucky, you may go decades before losing something forever, something significant, but does that make the loss easier or more difficult? The Atelier series has been one that’s explored many facets of responsibility, of unity and solidarity, of choices and consequences, but the tone, regardless, has seemed upbeat. Even with Atelier Totori, the search for a potentially dead and gone mother was still tinged with a strong vibe of positivity and hope. For the first time in my experience, Koei Tecmo and GUST decide to really paint a world with a dark brush, and the effect is beautiful. This is Atelier Ayesha: The Alchemist of Dusk.

Like other games, Ayesha does not begin the game as an alchemist. Rather, she is an admitted apothecary, who makes medicines to sell to the nearby villages and used to work with her sister, Nio, in their remote lab/home. Unfortunately, Nio has been, for lack of a better term, spirited away, and has been missing for some time. Ayesha manages to soldier on, putting on a brave face and continuing her daily life, but the missing component of her sister does make for a difficult life. One day, while visiting the spot where Nio disappeared, Ayesha is visited by two strange events. First, an apparition that looks and even sounds like her sister, but is insubstantial and vanishes quickly. The second is an older man by the name of Keithgriff, who is an alchemist from a far off land, and sees the magical potential in Ayesha. He promises that, should she put in the work and try her best, she may yet see her sister again and learn some valuable new talents along the way. However, she’ll have to act quickly: the time window where Nio can still be recovered closes every day, and failure to improve her skills in time could mean Nio is lost forever.

From the beginning, Atelier Ayesha: The Alchemist of Dusk (and the DX version therein) is not a great game for those who first want to start the series. Besides the heaviness of the plot and atmosphere (which we’ll look at in a moment), it’s a game that focuses a lot on the core elements of the series without necessarily bringing a ton of innovations to the table. There’s the common idea of crafting potions, poultices and other goods through the magical cauldron, gathering a bunch of ingredients out on the field, having turn based combat with enemies along the way and fighting against the clock in order to make it to the perceived best ending. Granted, the time restraints are nowhere near as narrow or stressful as Atelier Rorona once imposed, but the tonal shift also makes it feel much more important. “Prove you’re a good alchemist” versus “save your sister from the abyss” are two very different targets. Additionally, the game is in a weird spot in terms of porting. While it’s still a step up in terms of graphics compared to the Arland series, it still is inexplicably choppy and jumpy in draw distance spawns and just moving on the map when there are multiple NPCs or monsters ahead. With Atelier Ryza being available right now, it’s hard to justify the trip into Dusk to be the first for would-be ateliers. 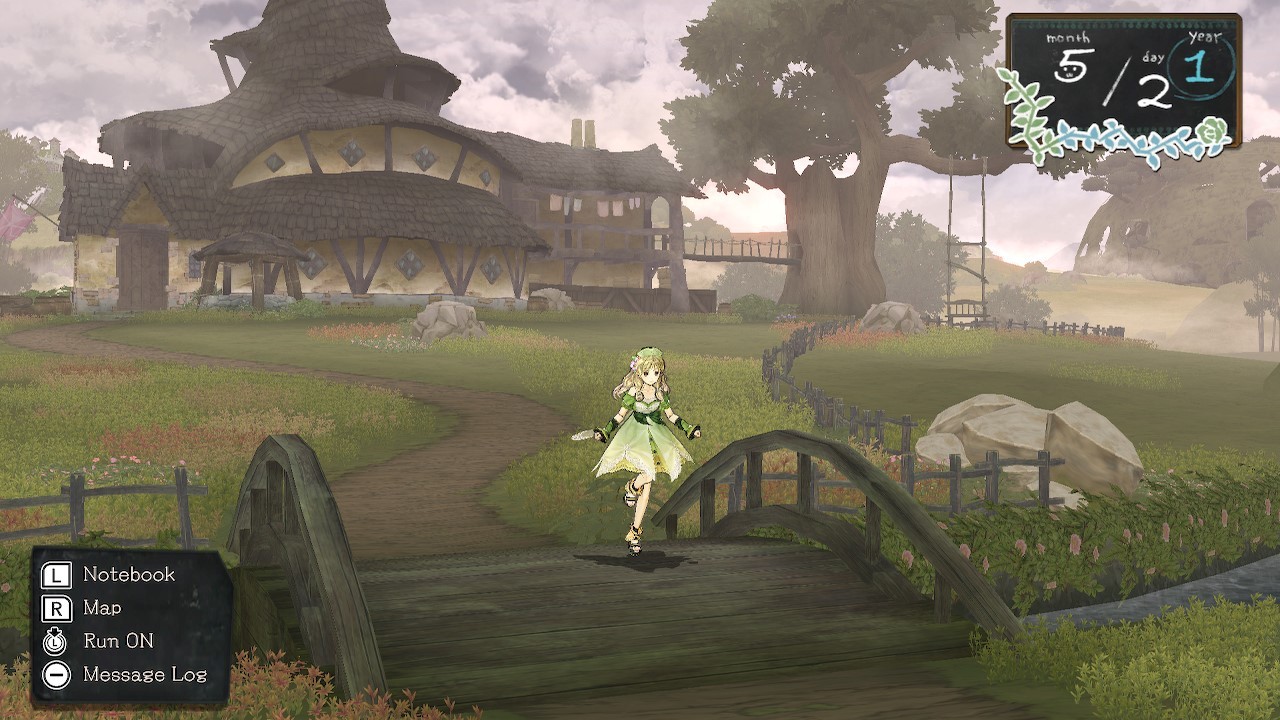 Having said that, there’s so much about Atelier Ayesha that long time players are going to love, and, frankly, plenty that offbeat RPG enthusiasts will attach to immediately. Firstly, the character base. Ayesha is one of my favorite of the Ateliers because she is doing what so many others try to do in this world: put on a brave face and smile in spite of inner pain and doubt. She’s very identifiable, and plays a convincing heroine in spite of having quite a few predecessors to compare against. Combined with the support structures of Regina (a friend who is loyal in spite of anything in her own world), Wilbell (trying desperately to live up to the family name), Odelia (can an automaton learn humanity?) and more, this might be one of the most robust and roundly made casts of the series. I was compelled by their side stories and the way they influence the life of Ayesha directly, which is impressive for my own perspective: I often start to drift after a period of time and just go into alchemical autopilot to make it to the end of the game. That never occurs here: without the need to specifically focus on one quest target then another, I could get wrapped up in the plot in a much stronger way and align better with our characters.

Moreover, the game itself does an amazing job of painting an atmosphere that properly fits the tone set forth by the characters and the plotline. Coming from Arland and the surrounding isles, I’ve been indoctrinated into landscapes of lush and vibrant life, complete with colorful, cute monsters and towns peppering the map. Atelier Ayesha has a world that feels borderline post post apocalyptic: the disaster has long since passed, and we are now in a level of rebuilding that still has echoes of what once was. When you explore ruins that are overrun with dry grass, or tarry across plains that just seem to stretch on forever, there’s a distinct feeling that is the positive version of loneliness. Even when you’re travelling with your companions (which you have the CHOICE to bring or not), you still have a sense of isolation: there was a world here, once, and we are in the aftermath. This is only further accentuated by the positively superb soundtrack, which explores everything from darker piano and string composition to some chanting that sends chills along your spine as you venture forward. I’ve never taken umbrage with the music chosen for the Atelier games, but this is one of the first soundtracks that I made a point to hunt down upon completion. 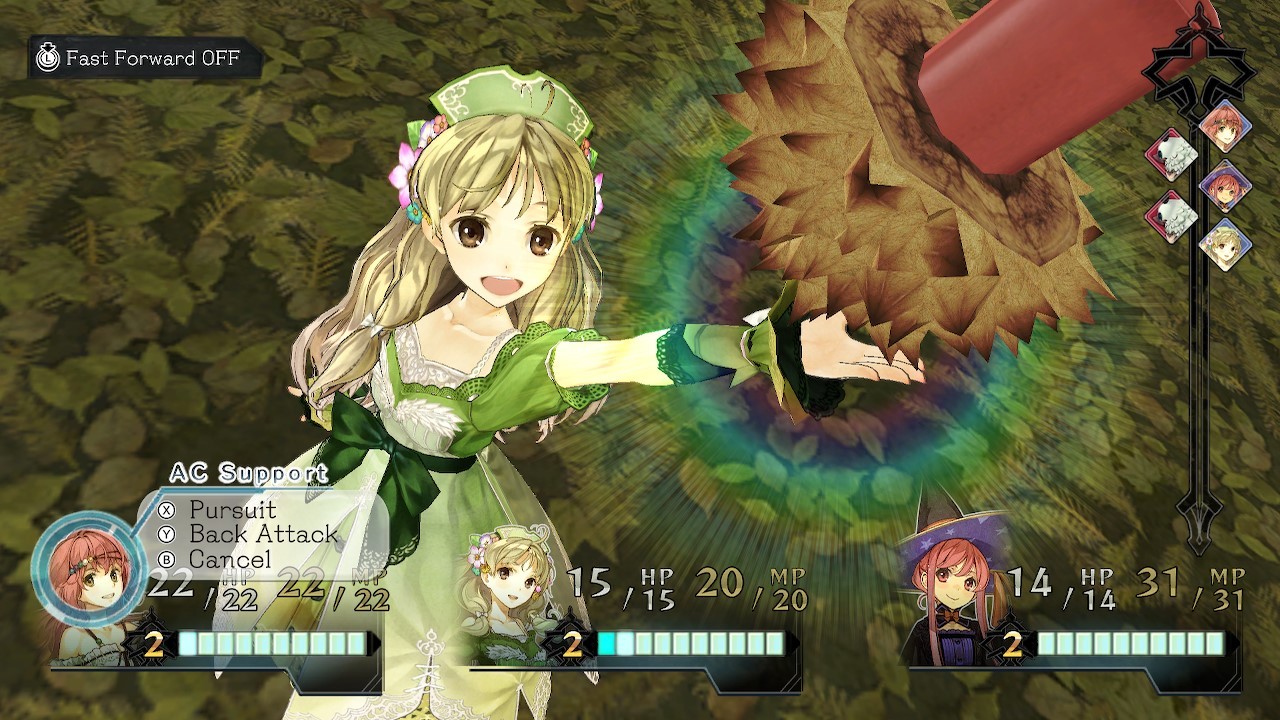 Additionally, the little things make Atelier Ayesha one of the more enjoyable experiences I’ve had in a while. As much as I loved Ryza for the pomp and circumstance, it was cool to have an Atelier game that was a bit more open world and aimless in the more minute sense of things. You just went out and explored, and the game seemed to shape the pathway as you decide where to go next. While there isn’t a true sense of “freedom” within the game (there are still plenty of places you can’t walk, areas you can’t explore), the way it presents was more natural. After all, my real world is “open world,” but I can’t just decide to walk into my neighbor’s house unannounced: this is Atelier, not Grand Theft Auto. Plus, as we explored more, I loved that everything was tied to this idea of memory points and experience as a literal, quantitative measurement. Ayesha would write things down in her diary, recounting what she had learned and what this could mean, and that was a choice you made, independent from saving your game in a different journal. You made the choice to chronicle events in the way you saw fit. Also, can I just say that I love the names in this game? Usually the Atelier series is filled with insane combinations of anglicized and Japanese names smashing into each other at breakneck speed (Rorolina Frixell?). Here, while not everything is commonplace, having people named Regina, Harry, Marion and, yes, even Ayesha, was so pleasant and enjoyable. Okay, Wilbell Voll-Ersleid is still a bit off kilter, but that’s the exception, not the rule.

The tonality and the almost melancholy feel of Atelier Ayesha: The Alchemist of Dusk can be easily offset if you’re not into the darker tones, and that’s where the DX version comes into play. Again, the choice to swap out party members at the drop of the hat is incredibly helpful to later gameplay combat, but the DX goes above and beyond with fan service in the use of (drumroll, please) costumes! Yes, besides the DLC content of additional monsters and a higher difficulty setting, you can be sure to totally throw off all shackles of a more brooding world with constant swaps into Alice in Wonderland inspired dresses and swimsuits, because that totally doesn’t undermind Linca’s development from former criminal to bodyguard. Seriously, Japan’s obsession with re-skinning their characters into totally implausible outfits is ridiculous, but this is a game that originally sold on the Vita: this was the only way to keep a game alive after launch, and the number of costumes available is, well, staggering. If you’re already neck deep in Atelier worldbuilding, you might as well see what it’s like to slap cat ears and sunglasses on your crew.

This is a brilliant arc of games (I’ll be covering all three in the Dusk trilogy), and it all starts here, with Atelier Ayesha and her entry into a world that is, seriously, one of my favorite so far. There are plenty of questions that remain unanswered at the end of this game, but we can still succinctly wrap up Ayesha and Nio’s story (provided you put some pepper in your tank). Though the port could be a bit smoother, the core gameplay is phenomenal, the combat is decent, the crafting is…where it always is, and the characters are exactly what I want in a game that asks me to care about the story. And the soundtrack, frankly, is one of the best I’ve heard in the longest time. Don’t miss this one, and get ready: there are more surprises to come in the Dusk world.

A love that is lost is one of the most powerful reasons to go somewhere unknown, and love and loss are the twin tones that make up Ayesha’s tale.