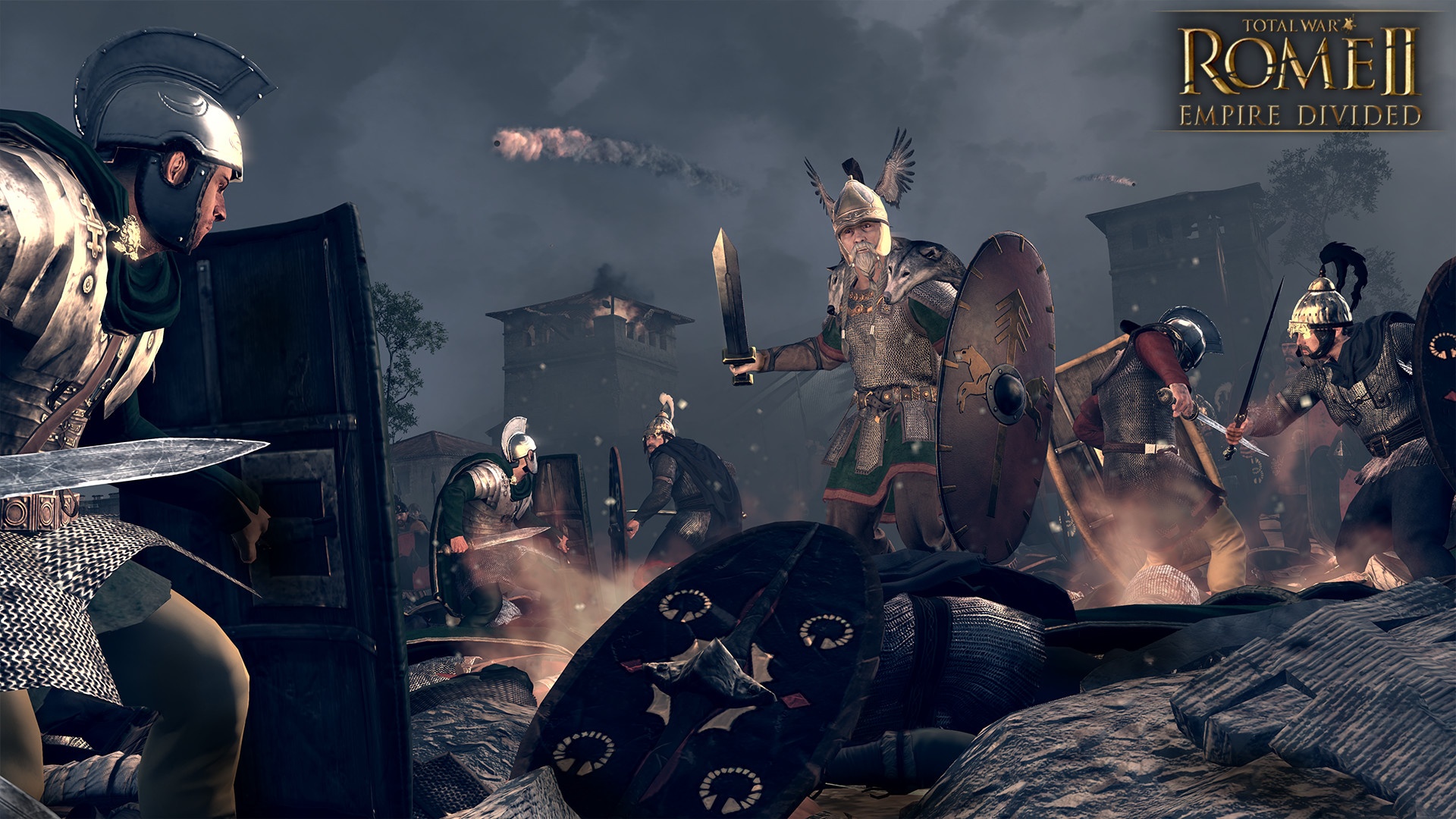 I am a lifelong fan of the Total War series. I’ve watched it mature and be refined over almost twenty years of iterative releases, each of which has addressed an interesting place or time in the history of the world. More recently, of course, Total War has spread its reach into the fantasy realms of Warhammer, which has resulted in a lack of proper, historical campaigning since Total War: Attila was released a few years ago now.

Now, interestingly, although I consider Attila to be probably the best of the historical Total War games because of its faction variety, relative graphical strength and the interesting mechanics like hordes and proper burning of cities etc, when it was released, I felt like it was a mere iteration of Total War: Rome II. Somewhere between a large expansion and a full game. Rome II has, in fact, had several small updates over the years since it launched, but none is more surprising than the one I’ve been playing solidly for the past five days: Empire Divided.

Set in the twilight years of The Roman Empire at the dawn of a period often referred to as The Dark Ages, Empire Divided offers a campaign scenario that delivers precisely what the name suggests. Following the death of Emperor Severus Alexander at the hands of his own soldiers in 235 AD, Rome was plunged into a series of civil wars that left it severely compromised and often, incapable of defending itself from increasing external pressures posed by various barbarian confederations and the resurgence of an eastern empire under the rule Queen Zenobia of Palmyra. 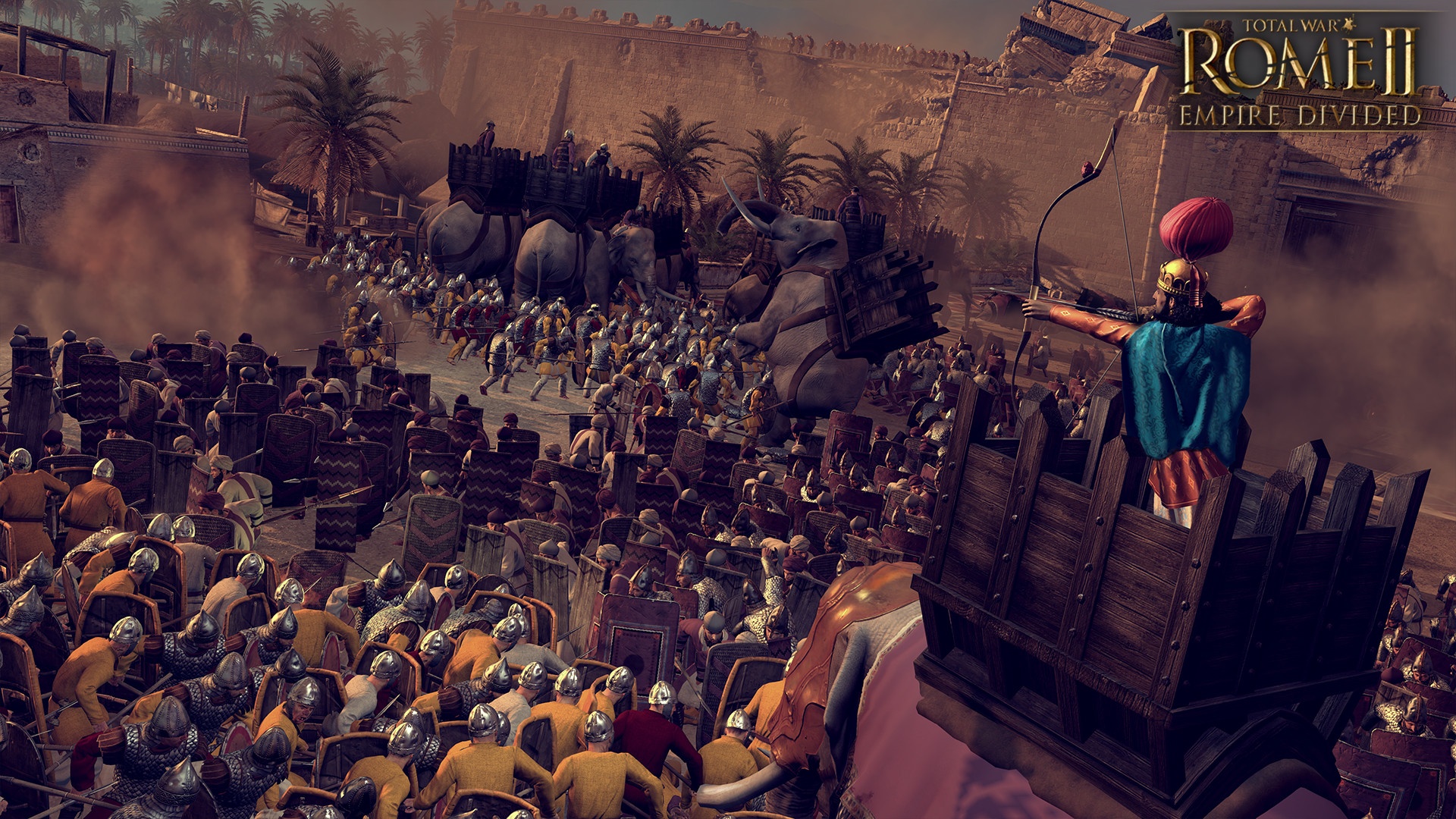 Ultimately, whilst the Roman Empire did survive this period, it was forever changed. The Empire Divided DLC offers players the opportunity to play as various factions during this tumultuous period, including the three spokes of the Roman Empire and a wide range of barbarian tribes from Briton, Germany and further East, as well as the Palmyran and Sassanian Empires. Whilst each faction has subtly different objectives (in particular the five Heroic Factions that I’ll describe later) this is Total War, so as you already know, domination of the known world is what you’ll be setting out to achieve.

Unfortunately, I really don’t know why Empire Divided has been released for Rome II, rather than Attila. The setting of the grand campaign is great, but the mechanics of Rome feel massively outdated after Attila and the two Warhammer iterations of Total War. Despite the reality of the fact that during this period, entire provinces were left burnt and barren, city razing is reverted back to a statistical exercise in eradicating the populace and all key buildings, rather than actually removing a settlement from the map as it should. Barbarian tribes, for example, cannot therefore blow through the empire looting and pillaging as they can in Attila. Politics and faction management is unchanged, so again you’ll feel like you’ve stepped back in time a bit if you’ve played later versions of Total War.

I should say though that this is true of everything about Empire Divided, which isn’t really the fault of the expansion pack specifically. It’s cool, in some ways, that Creative Assembly are still supporting a game that has been out this long, although at the same time the Steam Workshop is filled with free modifications that achieve the same or similar levels of new content at no cost to players who, for whatever reason, decided to stop upgrading the version of the game that they play. 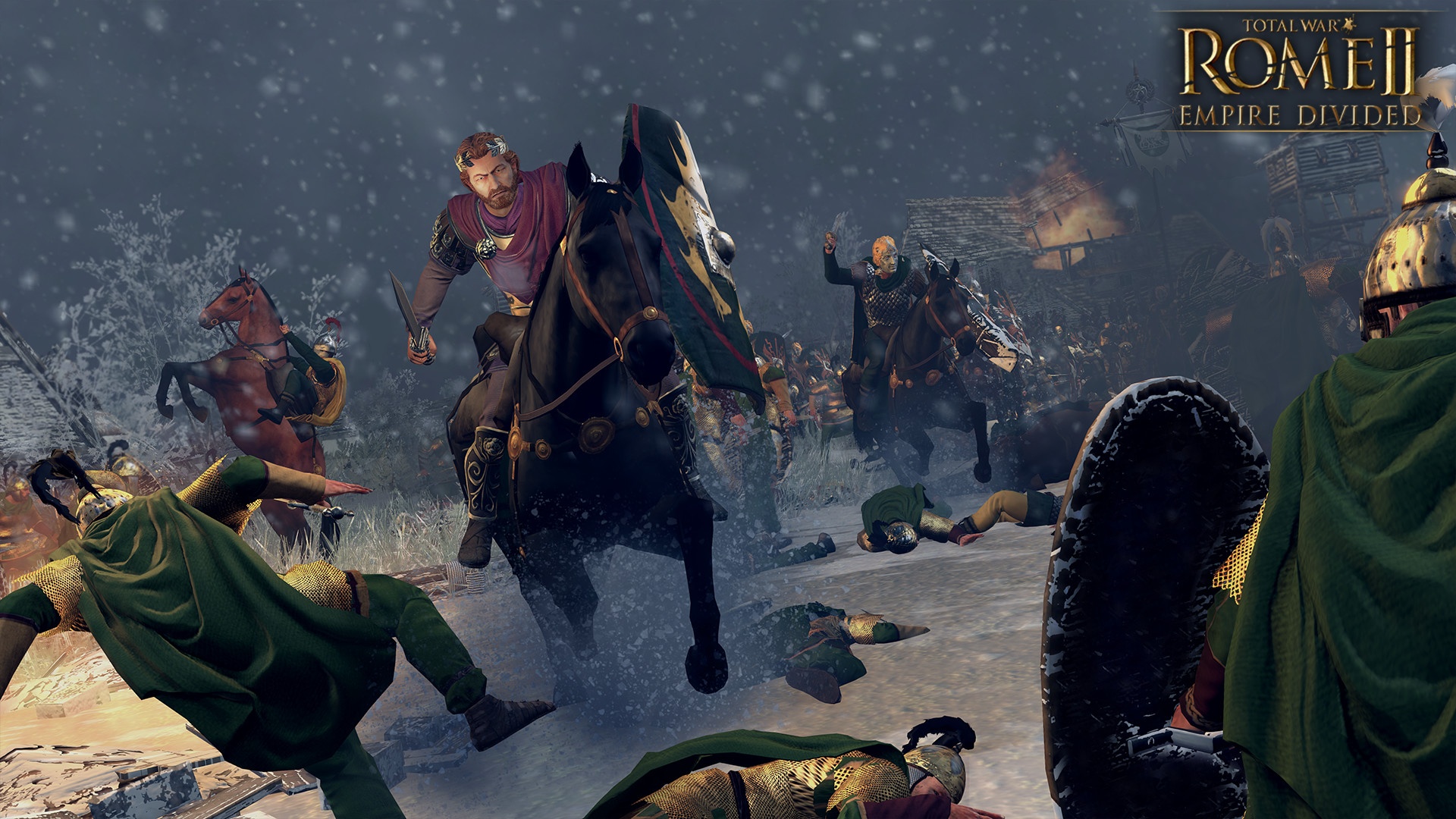 The five heroic factions (Rome, Gallic Rome, Palmyra, the Gothi and the Sassanid Empire) in the game offer new story arcs which are linked to thematic technologies and advancements that actually do a decent job of portraying each factions historic struggles, but the expansion fails to make each faction feel different in other ways. All factions can effectively be split into three models – Roman, barbarian, or Eastern Empire. Even then, due to Rome’s prior dominion over all these people, the way the troops fight is common among all of them to the extent that there is little or no strategic difference whichever you might be controlling in battle.

This lack of variety also manifests during in game events. Plague, banditry and a handful of new event types can now occur, but you’ll have seen them all within a few in game years and none of them really change the game except at a province administration level. On that note, there are a small handful of new buildings too, mostly related to religious cults that differ from the religious structures already in the game, but fail to create any real drama or tension. Instead, they resolve normal issues that you might have encountered anyway like public order, sanitation or (most commonly in my case) lack of food.

In summary, whilst I still consider Empire Divided to be successful at what it sets out to do – demonstrating an interesting period in Roman history – it does not inspire me to play Rome II beyond the forty or so hours I spent preparing this review. The content is spartan but acceptable, but the base engine used in Rome II just doesn’t live up to the same standards as its sequels – and why would it? Players desperate for more Rome II content should simply buy Attila instead, or perhaps visit the Steam Workshop to see what’s there. With great pain in doing so, I have to award Empire Divided: