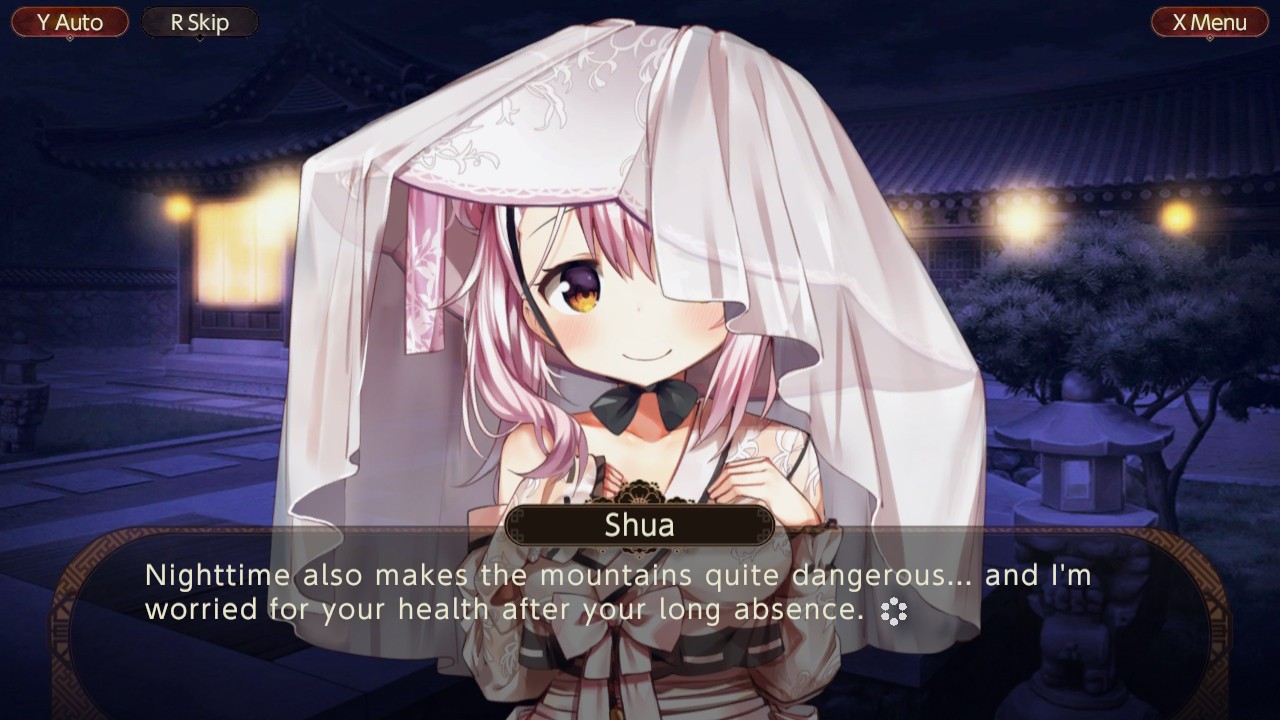 I’m gradually learning more and more about what makes visual novels successful and pop. I used to think it was only about the story, but that’s what makes for a great book. I then thought it was about great voicework, but that just creates good audio for different scenes and aspects. After having played so many visual novels last year (and more coming up this year!), I think I’m hitting the formula on the head through recognition. It’s a marrying of different elements to meet your audience’s expectations and exceeding them. For example, CLANNAD was about drawing out an exceptionally long narrative that crossed into multiple genres and ideas, urging players to try and grasp the full weight of loss and love while also mixing in enough fantasy to keep players intrigued beyond romance. YU-NO had fantastic science-fiction factors that also were countered by some solid female characters, a bit of an ecchi vibe and some unforgiving choices that you only get one chance to make. For #tales, the Korean developers who created The Fox Awaits Me, it was learning from their last project (My Girlfriend is a Mermaid), building, and trying to keep true to their own vision as well as their fans’ interests. The result? A better product, a better direction, and a better overall experience in spite of a very, very rocky start.

Let’s break it down. The Fox Awaits Me is a fantasy mystery game that carries the twin swords of Suspense and Perversion at its sides. Kaito, our main character, awakens in a bamboo forest with no knowledge of anything, particularly how he got there or who he is. He shortly runs into Shua, a foxgirl who seems to know Kaito, potentially intimately, and brings him “home.” It doesn’t take long for several bizarre incidents and moments to occur to let Kaito know that things aren’t exactly how they seem, and that there’s a bit going on around him in the mystical realm. Like the mountain deity who appears to have an interest in him. Or the Grim Reaper in training who is stalking outside of the house where he resides. Or, most interesting of all, the fact that the modern world appears to exist, possibly just outside of this forest, and Kaito has fleeting memories or ideas that indicate as such. What is the real mystery of Shua, Kaito, and the world where they reside? And will he ever get answers that are satisfactory? 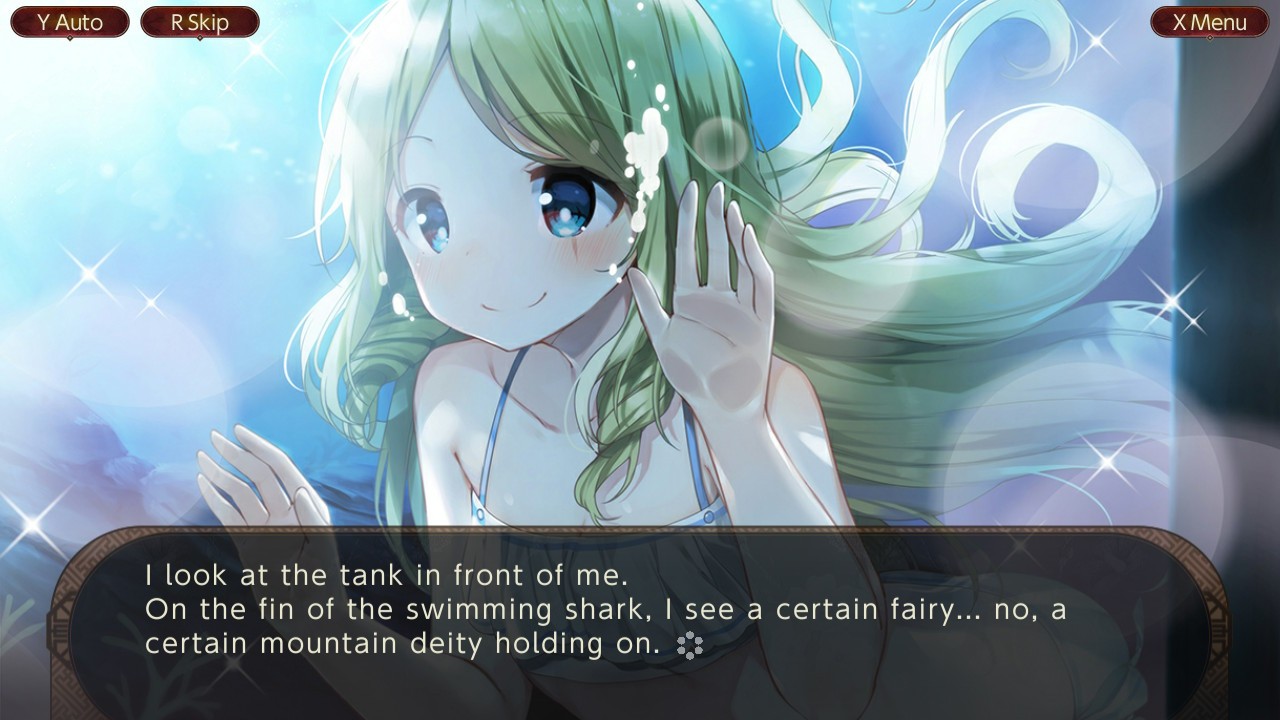 As a visual novel, you already anticipate several ideas about The Fox Awaits Me from the get go, and they’re mostly on point, especially if you can see the artwork in the screenshots peppered throughout this review. You do a whole lot of reading, make several choices throughout each act (some inconsequential, some incredibly important), and try to make it all the way to one of many endings that await you. The endings are tied, in one form or another, to the different female characters that you meet, all of whom seem to take an unhealthy interest in Kaito, though in dramatically different scopes. Shua, for example, is tied to the biggest and wildest of the endings (as you can tell from the title of the game), but there’s something to be said for the other characters as well. Given the mythical setting of The Fox Awaits Me, you should be aware that there are a couple of endings that could, potentially, be seen as disturbing, so be cautious if you’re easily upset by elements of death, the afterlife, or emotionally psychotic episodes.

Now, if you played My Girlfriend is a Mermaid, you should also know that this game has many drastic improvements, not the least of which is Kaito himself. Whereas Hiroto was a long winded, whiny and perverted protagonist, Kaito is helpfully stricken with amnesia and needs to figure out life one panel at a time, which prevents him from immediately becoming a sleazeball. Additionally, he seems to understand that Shua is playing an odd game of hot and cold, coaxing him into making comments or movements that could come across in a certain way and then reacting in a shocked or admonishing temperature. This doesn’t mean there aren’t moments of blue throughout: keeping true to their fanbase, #tales made sure to have plenty of shots of the different potential interests in poses, outfits and strange positions that raise eyebrows. There’s one situation where you end up going with Shua into a memory and end up at a movie theater, and quickly realize that there’s the option to watch a “mature” film. It’s a lot of anime tropes that bubble up to the surface, but Kaito handles them as well as can be expected.

Shua, who you spend a huge amount of the game with, makes herself hard to like initially, and that’s one of the issues with The Fox Awaits Me. Instead of overwhelming players with walls of text and a lot of description, the dialogue and moments go the opposite way, devolving into single snippet lines that are sometimes two words or less. Shua will often talk in circles and play games with Kaito, appearing and disappearing and repeating herself in order to have fun in her own way. Now, this actually lines up well with the mythology of the kitsune in Asian lore, but that doesn’t mean that it isn’t grating, particularly when you have to force yourself to pay attention so you don’t miss something. You get to used to seeing lines of empty periods or just repeat laughter that you might start mashing the button (or screen, touchscreen control is available) to move things along faster, and then you magically miss the one important line of dialogue that finally gets espoused. If I had to boil down percentages, I would say that Karin (the Grim Reaper) has a 58% relevancy rating, Mimiru is 50%, and Shua is a shocking 33%, with only one out of every three lines for the whole game actually meaning anything. You need to get all the way to Act 5 before things start to really pick up in the clarity department, and everything prior to that is about an hour per Act with five minutes of important ideas. 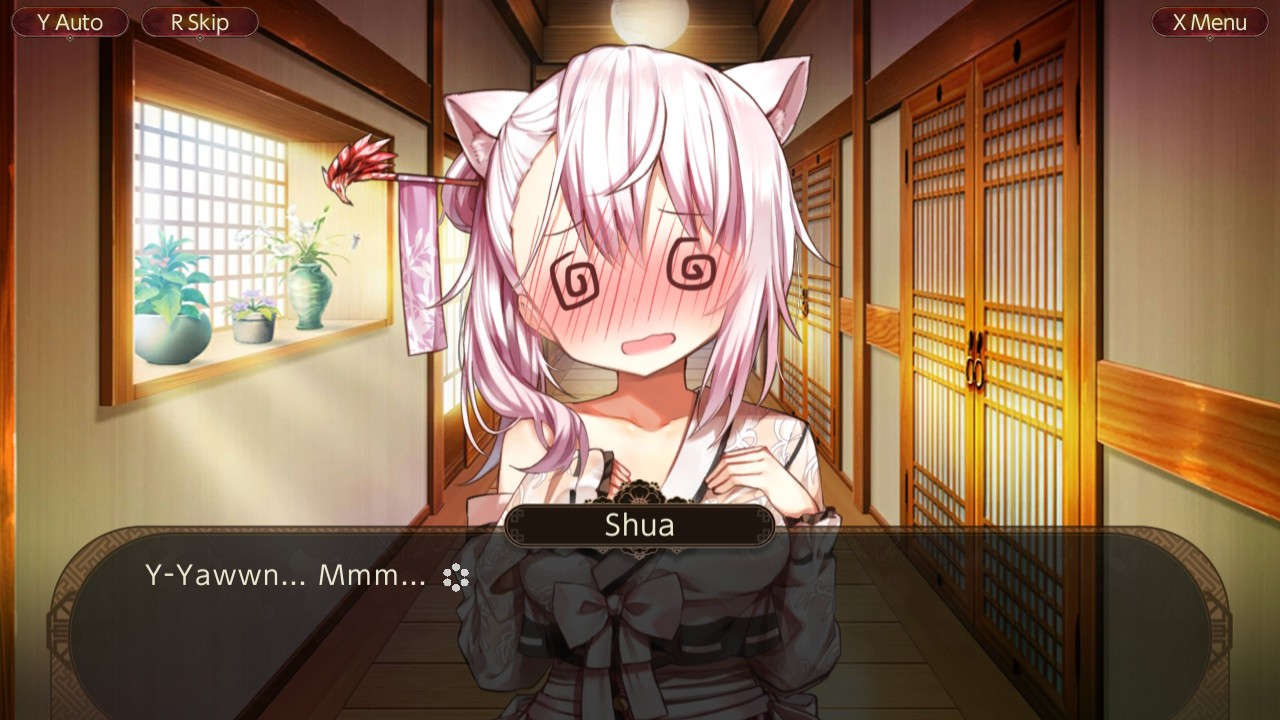 Still, the way that The Fox Awaits Me takes this pacing does make for a more enjoyable ride overall. Early episodes are very aloof and borderline silly with cold shots of foreboding or mystery running through. You gradually begin to piece things together, and then it starts to come at you fast and furious. I liked the characters, truly I did, though it sometimes required taking a moment and scrolling back through the logs to see what I missed due to button mashing, and this story was just infinitely more intriguing than My Girlfriend is a Mermaid.  The soundtrack, though a bit sparse, did wonders to help underline important moments of gameplay and choice. The voice actors were spot on, and I seriously appreciated the hard work put in by the Japanese actresses. Artistically, The Fox Awaits Me is a huge step forward: the backdrops are cleaner, more detailed, while still maintaining proper ethereal components so I stayed focused on the main characters. The different girls were given better ranges of movement and facial expressions throughout the journey, though not as wide of a range as I’d like (there’s a moment where Shua is supposed to be quite menacing but just looks goofy). The CGs (which are all viewable in the gallery once unlocked) did a grand job of showcasing certain encounters and events in a more detailed way, but I didn’t think any of them (with one exception) were there for ogling or fan service: they helped to accentuate certain moments and are nice reference points to come back to later.

The Fox Awaits Me is a grand step forward for #tales and Cosen in terms of bringing better quality visual novels out of Korea and to the wider audience. It’s engaging, the story is really exciting and convoluted without being too confusing, and I feel like the slice-of-life anime trope moments are well balanced by the otherworldly elements of mysticism and existential quandaries. The branches aren’t initially clear, but the achievement list is helpful in giving you some direction, and the long downtime pauses between conversations disappear when you fast forward through previously viewed footage. A lot of love went into this terrific and tragic tale, and it touches upon some real moments of psychology that caught me off-guard in a good way. Perhaps, when we all reach that moment of the end, we should look for the fox to be there, guiding us in one way or another. If anything, I can say that this adventure has left me far more satisfied and content than my last outing with #tales, and that’s enough for me to recommend it to the visual novel community as a whole.

The Fox Awaits Me Review

A open hand, a soft touch, a gentle voice: these small gestures lift you out of your amnesiac stupor and into a long, strange journey with plenty of surprises.