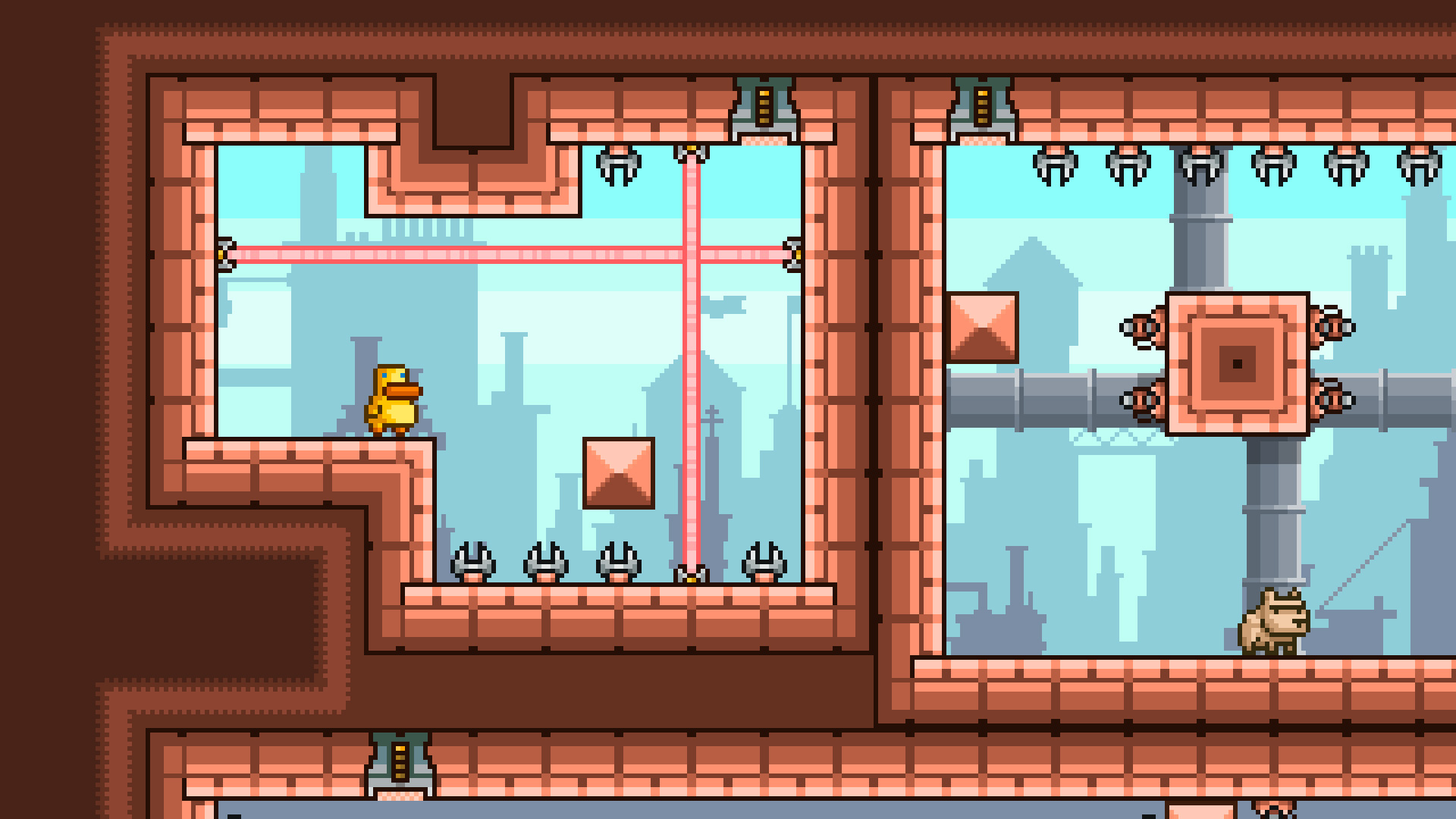 Ratalaika Games are having a busy summer as they publish another title, this time it’s Gravity Duck. It’s another 2D platformer in the same vein as Hoggy2, which was another Ratalaika Games title released recently. Actually Gravity Duck and Hoggy2 have a lot in common in both their looks and game mechanics.

Gravity Duck starts off with a duck being promised riches beyond their dreams, as long as the duck can collect 140 or so golden eggs across 140 or so levels. The main ability of your character is that they can control gravity, sort of. When you jump you do not come back down, you end up at the top of the screen, you can move left or right but you won’t fall. If you jump again you’ll end up on the ground again. Hoggy2 had the exact same mechanic, so if you managed to play that then you’ll take to Gravity Duck like a duck to ………. water. Just like Hoggy2 there are various obstacles in your way that will make it hard for you to reach the golden egg required to complete the level. 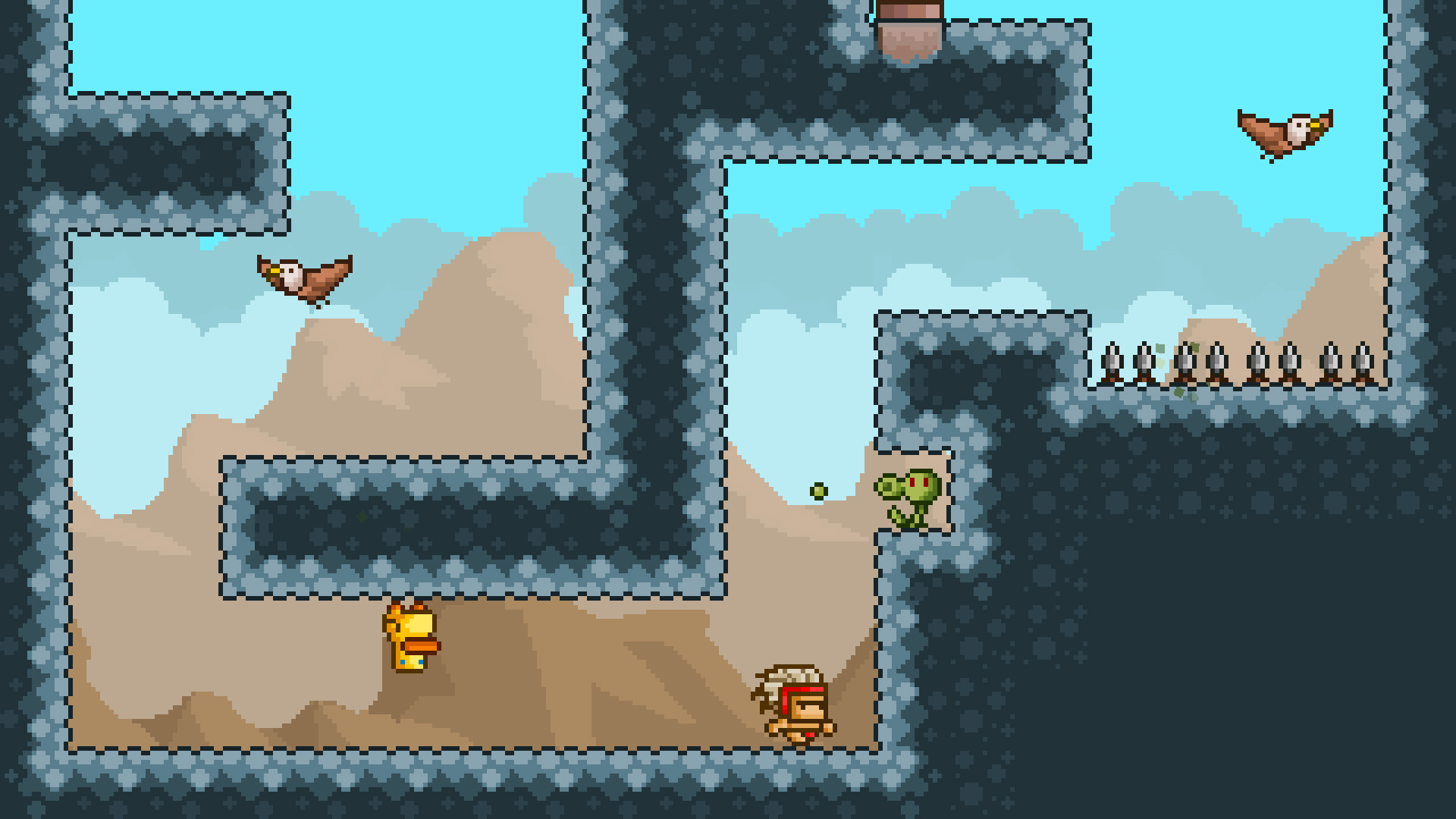 The levels at the beginning are very easy, the first basically has you run in a straight line to collect the egg. The second, you have to jump to reach the egg. Bear in mind you need to be on the same surface as the egg to collect it. Later on in Gravity Duck you will come across spinning yellow swirls that will change your direction by 90 degrees, very useful for running up walls, but you can’t jump into a horizontal placed egg from a vertical position. There are four different worlds to travel through, nothing out of the ordinary, the usual forest, cave, mountains and city scenario you would have played with many times in many games. The obstacles in Gravity Duck are your standard fare consisting of lasers, spikes and various enemies. There are slow moving caterpillars, fast moving zombies, butterflies who have a great shot on them, flowers that just shoot in straight lines, bats that chase you etc, there’s a decent amount of enemies to contend with and get round.

The most difficult bit of Gravity Duck is planning the route as many levels can be completed in seconds if the correct preparation has been applied and also your ability to navigate yourself midair. There are less abilities in Gravity Duck than Hoggy2, in Hoggy2 you could make yourself super strong or set yourself on fire, Gravity Duck doesn’t have that. Just like Hoggy2 if you get hit, then that’s game over for you. 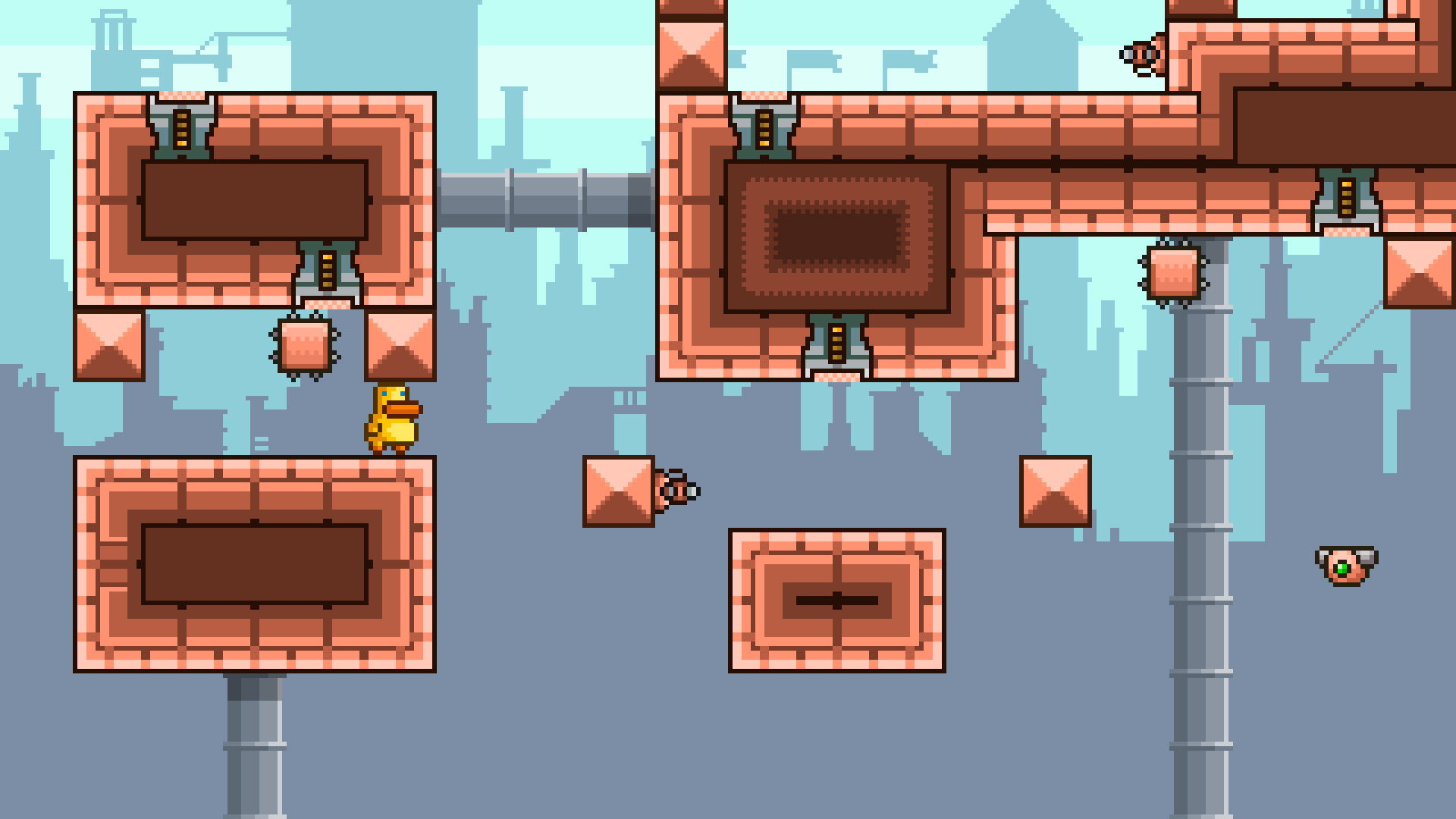 Graphically Gravity Duck flies with a cute design, not as cute as Hoggy2 but still cute nonetheless. Musically Gravity Duck has a very catchy tune, unfortunately it appears to be the only tune that is played. The initial reasoning behind you finding eggs isn’t really expanded upon, which is a shame. Hoggy2 had cuter protagonists, more of a coherent story and more elements in its gameplay when compared to Gravity Duck, Hoggy2 is simply a better and more entertaining game than Gravity Duck but that doesn’t mean Gravity Duck isn’t fun to play, it just becomes more repetitive as you make your way through. Hoggy2 had a level editor, Gravity Duck does not.

Gravity Duck is a short lived, but fun twenty minute title. If you enjoyed Hoggy2 then you’ll get a similar but significantly lighter amount of joy out of Gravity Duck. Just like most Ratalaika Games titles, Gravity Duck has a very easy to get platinum trophy, so is probably already on your list to complete. Due to its simplicity Gravity Duck is an addictive game to play but Hoggy2 just does it better.

You’ve been asked to collect all the golden eggs, but you’re a duck. Come fly with Gravity Duck.