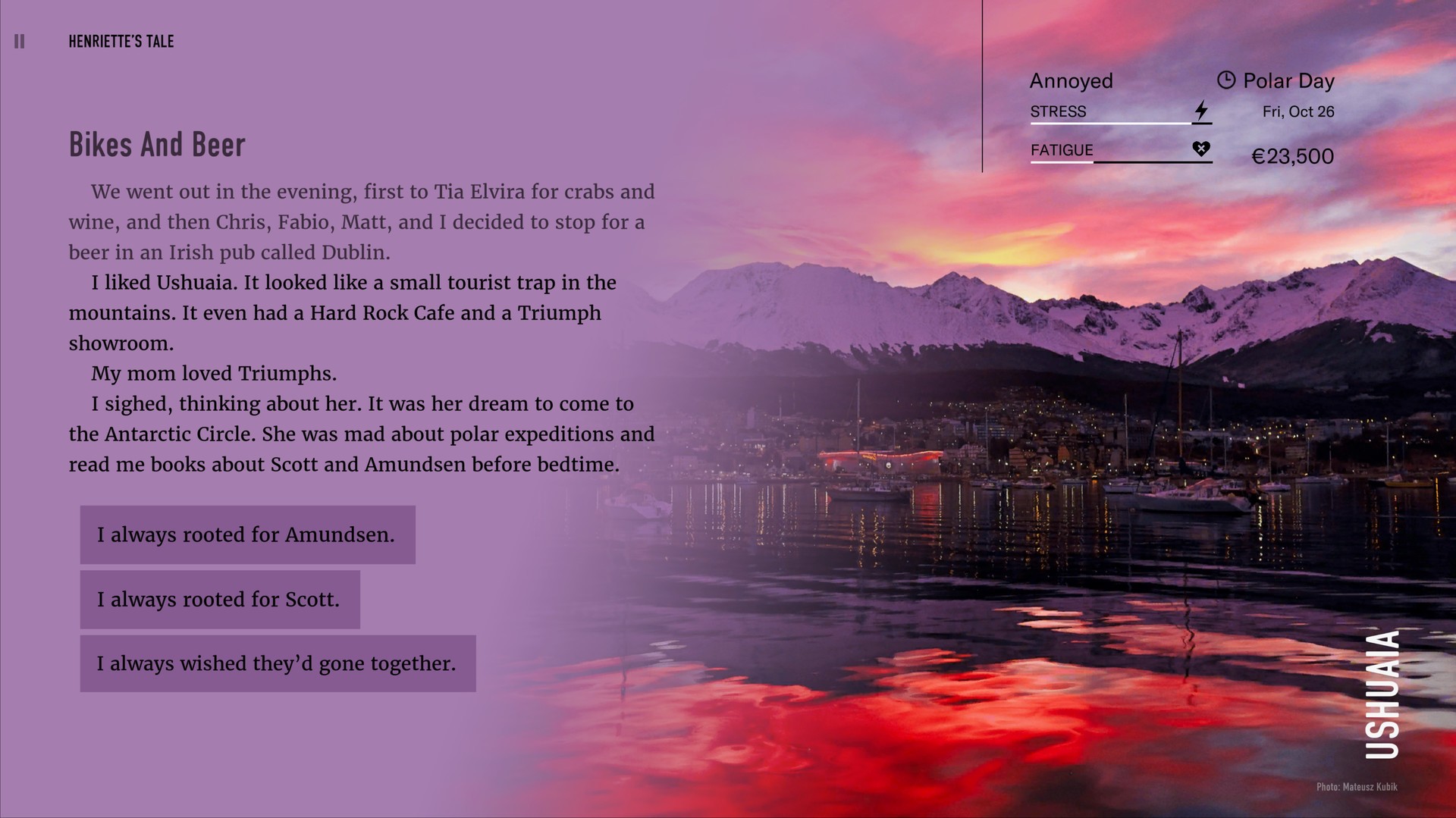 What made the Nintendo DS one of the best selling systems of all time is the fact that it was versatile to the extent of being a non-gaming device. In an age before smartphones were ubiquitous, the DS allowed people to not only play Mario games, but also to study languages and subjects, to understand more about skill sets, to read, to color; to do a whole lot of different things. So when I see something coming to the Switch that feels more in the realm of the DS sort of catalog, it makes me happy. Sure, I prefer to game with my consoles and leave the work and study to my phone, but options are nice, especially when well executed. With Wanderlust: Travel Stories, it’s clear that there was a different sort of vibe that Different Tales was going for. With Forever Entertainment at the publishing helm, this non-VN visual novel is certainly different, if not exactly my preferred cup of tea.

Wanderlust: Travel Stories is an unusual bird. It presents in a manner that might feel off-putting to some. Basically, it’s an anthology of sorts that comes wrapped in a visual novel veil, but it never, even once, gets to a point where it becomes like any of the visual novels that I’ve played on the Switch so far. You’re in the omniscient boots of a fellow traveller, who begins on Easter Island and runs into a group of other travellers who’ve ended up on this small island at the far end of the Earth. Everyone has a tale to tell and throughout the course of a few days, everyone takes a turn telling about explorations, personal anecdotes and even romantic encounters across the globe. Your job, your only job, is to follow along with the story and make a few small choices, ones that feel more atmospheric and aesthetically based than anything else. When a story wraps up, you return to Easter Island and get ready to hear the next story. That’s seriously it. This is, quite literally, the least “visual” visual novel that you could encounter. 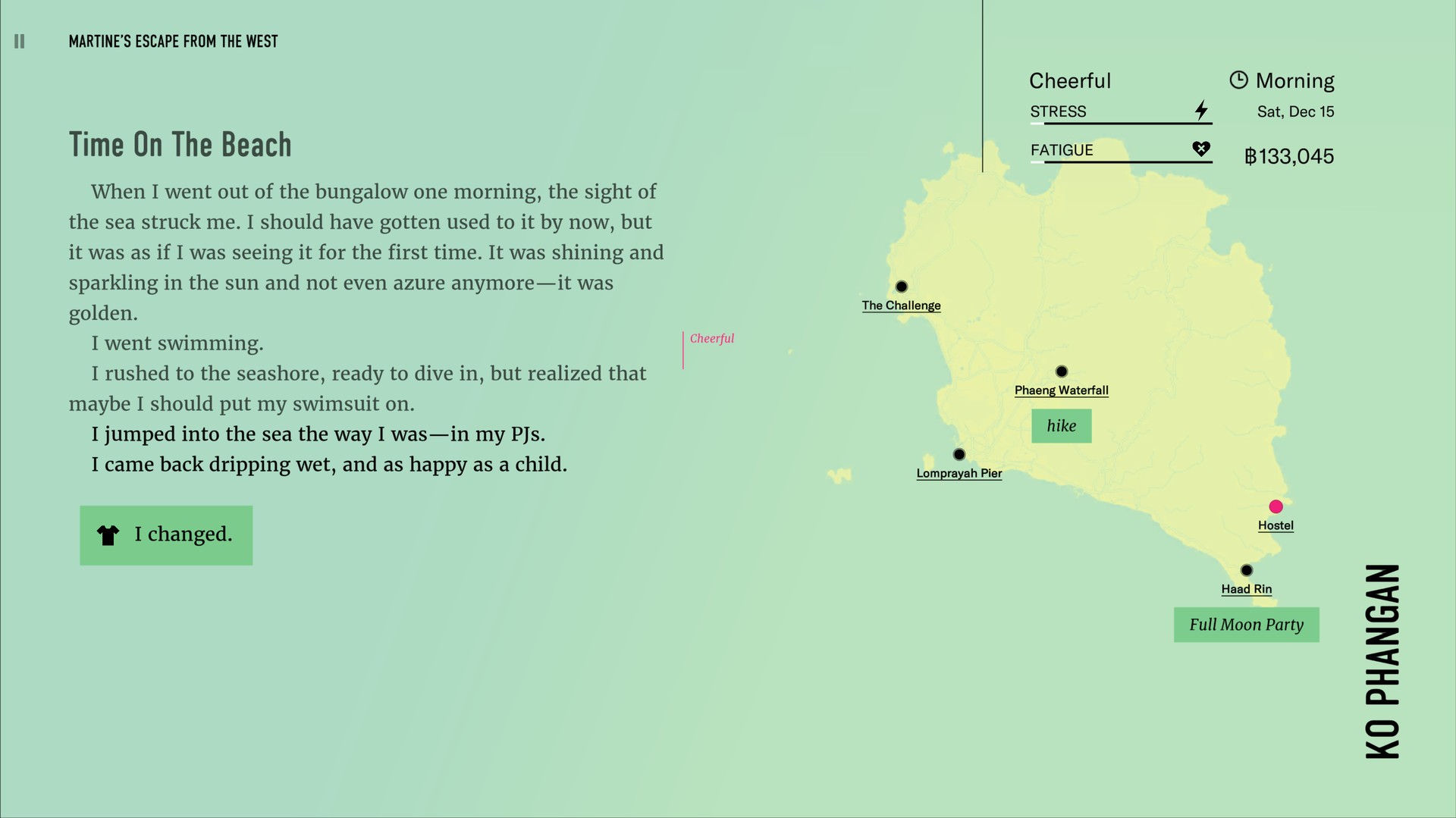 Now, to its credit, Wanderlust does a lot of things right. Firstly, the game does a fantastic job of trying to transport you into the world of the story without leaning too heavily into distracting from the text. As you move about from Barcelona to Thailand, Antarctica to Africa, the backdrop changes in some large yet subtle ways. The ambient music will shift to more sounds and tunes that suit the mood: from the distant call of jungle animals to the murmur of a crowded European street, the light touches of atmosphere help to put you in a mindset that matches the faceless but recognizable wallpaper of the story. Rather than engage in full motion avatars, cutscene cinematics or even a voice cast, Wanderlust chooses to stand on just the literary vantage, letting readers adjust the speed and amount of text they see but little else. The book is a book, and you need to be able to read that.

If you’re prepared for something that’s both very relaxing and non-invasive, Wanderlust has you covered. The game itself is a result of several writers coming together to collaborate, either through fiction or personal experience, the idea of going to these different spots in the world and trying to describe them to someone while adding a touch of realism. As you move through the streets of Bangkok and your view shifts from an alleyway to the famous Midnight Market, maybe you decide that the fried crickets will be the perfect snack as you continue to explore the city. Maybe you will use your own personal standpoint and opt not to munch on the insects. By adding the gamification of the storytelling, the player is able to hear but also control someone’s tale of going to a foreign country, creating an interesting semi-narrative that makes for an interesting effect. Your decisions are usually “this or that,” but you can always be curious about what the other path may have brought, similar to going on a trip yourself. In that sense, Wanderlust delivers exactly to the audience that they’re targeting. 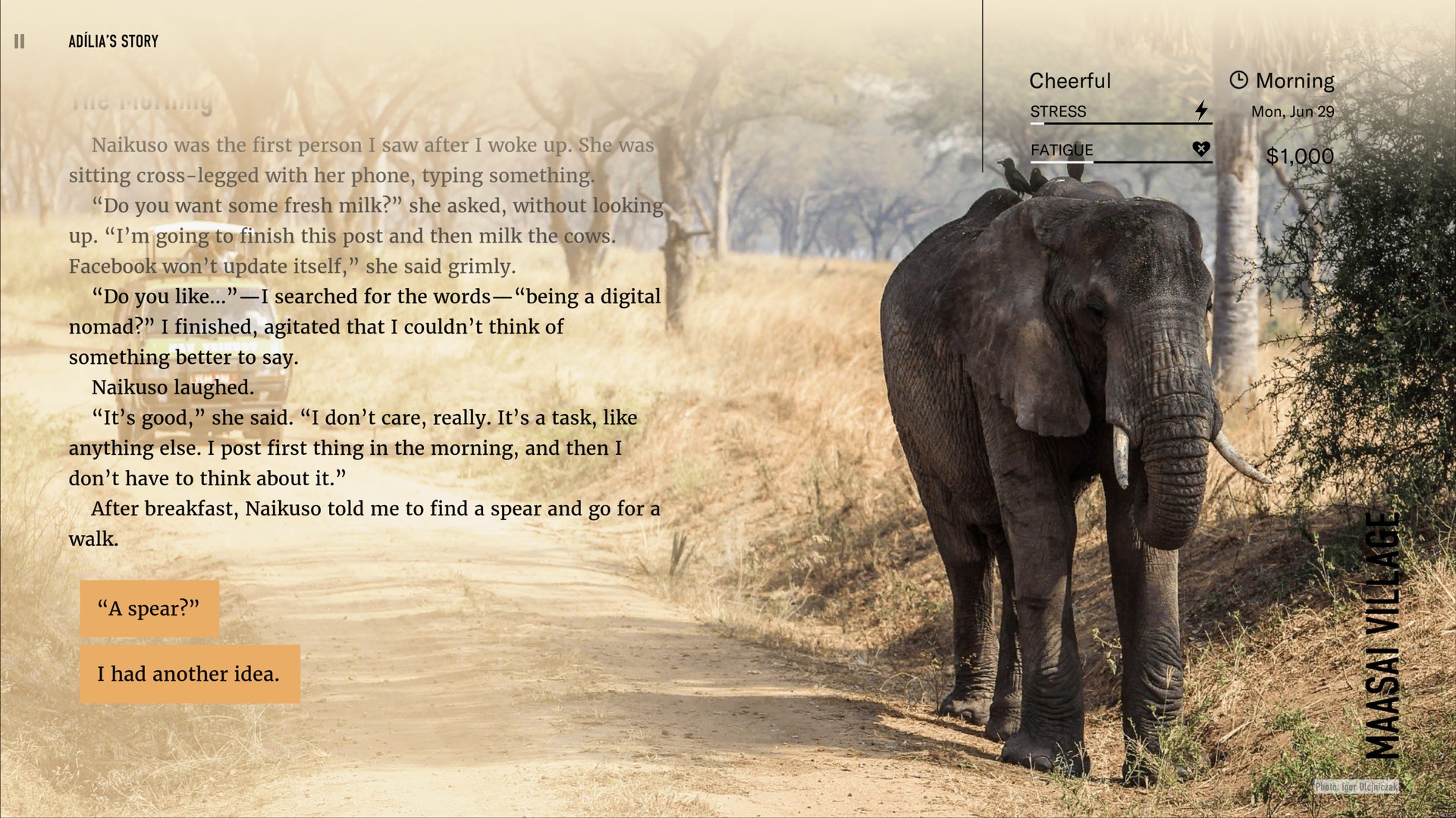 Then again, on the other side of the coin, the more relaxed take on the game can make Wanderlust a bit of an anticlimactic jaunt for others. This isn’t some kind of secret horror tale that we see in other visual novels, where the peace and serenity of vacation is suddenly disrupted in a Hostel manner or whatever. It’s seriously the wistful remembrances of people on vacation, maybe a few days ago or years gone by, and they’re here today to share them with fellow globetrotters. There aren’t any negative consequences for choosing one thing or another, and you aren’t going to end up with a “Bad End.” Instead, the story just moves forward. Flirt voraciously with the woman at the cafe or don’t flirt at all, you end up finishing your trip all the same and still land in Easter Island some time later. The lack of tension made the game feel a bit boring after a while. Sure, I love penguins and the trip to the Arctic was interesting for whale watching and hearing from other passengers on the boat, but it was all so passive. I wasn’t even crafting my own story. I was reliving another person’s life, and part of that was listening to yet another person’s life. A picture of a drawing of a photograph, as Calvin once said.

For me, personally, I like being the master of the ship. When I play any sort of game, be it action or strategy, I enjoy commanding and deciding what will happen next, at least as far as I can. With Wanderlust, you’re just sort of strapped in for the ride with very limited, small choices that may or may not matter in the grander scope of things. The developers have compared it to Choose Your Own Adventure books, but those even have consequences that can lead to a bad ending or a short, sudden death. This is a gentle coast of an adventure book that leads right back to where you started, with a little more understanding and maybe appreciation for somewhere that you, theoretically, haven’t visited yet. Maybe this is a great modern companion to those travel books that spurred our parents out of the house and off to the corners of the world when they were young. Maybe this game is even for them now, who want to have a minor thrill of seeing a bit more of a humanistic view of another world without needing to fire up YouTube or strap on VR goggles or, worse, actually travel. Wanderlust is for someone, and it’s well done and well written. Just, sadly, it isn’t for me.

A well written travel novel disguised as a game, Wanderlust is a relaxing read but hardly exciting enough to garner the attention of many seeking gameplay.