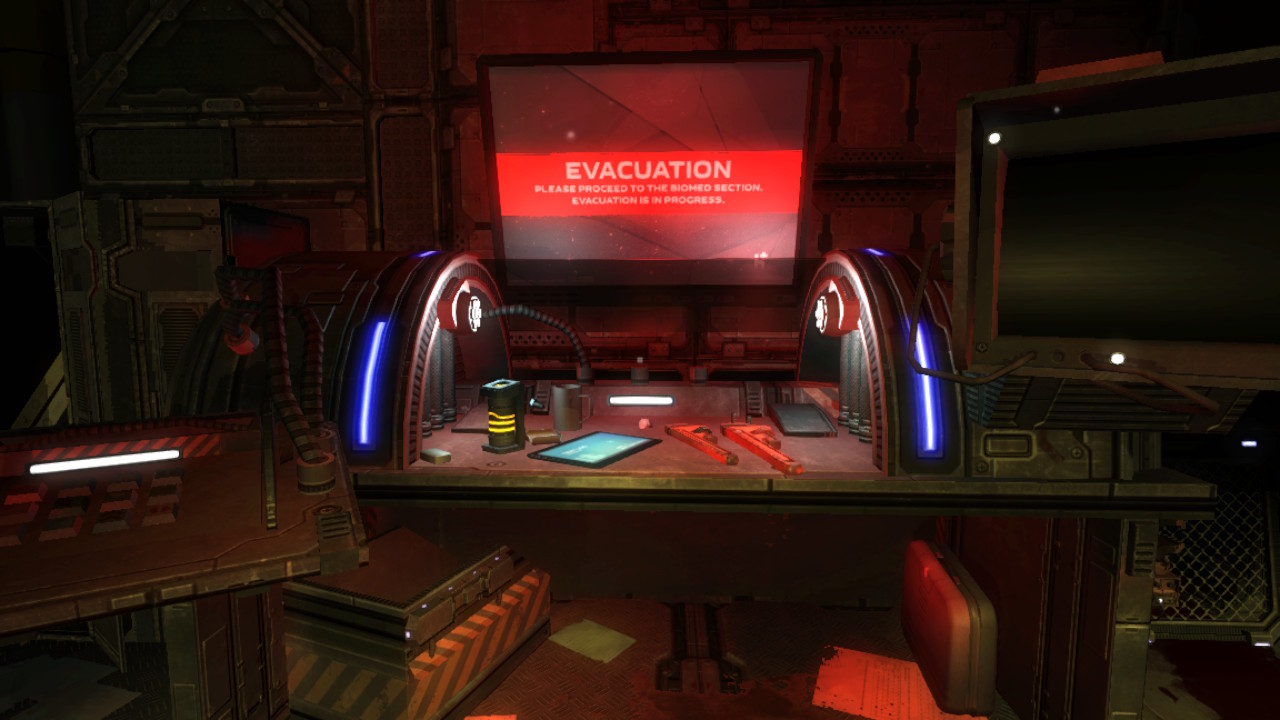 Since the release of Outlast in 2013, the majority of survival horror games that have been released since then seem to model themselves on the same mechanic as employed within Red Barrels’ adventure. Titles such as Don’t Knock Twice or Here They Lie now rely on ambience and hiding, rather than the original template of fighting for survival that the Resident Evil series did so well. In terms of atmosphere, these style of games do present a very eerie setting, but ultimately, the majority of them just end up falling a bit flat with the predictable scares and generally, linearity of what to expect. So, how does the latest of such titles within this genre, Phantaruk, scare us as it screams a release onto the Nintendo Switch.

Developed by Polyslash, with publishing through Forever Entertainment, this game sets you within the confines of an abandoned spacecraft as you awaken from a stasis capsule. Not too clichéd then. The rooms and corridors of research vessel Purity-02, your ship, are dimly lit and foreboding, as you explore your surroundings to piece together the story that tells of what has happened here. You soon learn that your craft is a laboratory of sorts; the home to all sorts of questionable experimentation in an effort to create the perfect post-humanoid. However, despite being seemingly deserted, you are not alone aboard this vessel, as within the shadows lie the failed experiments who hunger for your blood.

The game plays in the same style of other survival horrors before it. Part walking simulator, part hide-and-seek. There is a need to explore every region within the spacecraft, picking up notes and listening to voice recordings that reveal the back-story that has led to your current plight. Exploration becomes a vital element to the gameplay, as you soon learn of the need to acquire syringes too; each one containing a temporary relief to a form of poisoning that has infected your own body. The longer you go without an antedote, the higher the level of infection within your body, eventually leading to your untimely demise. 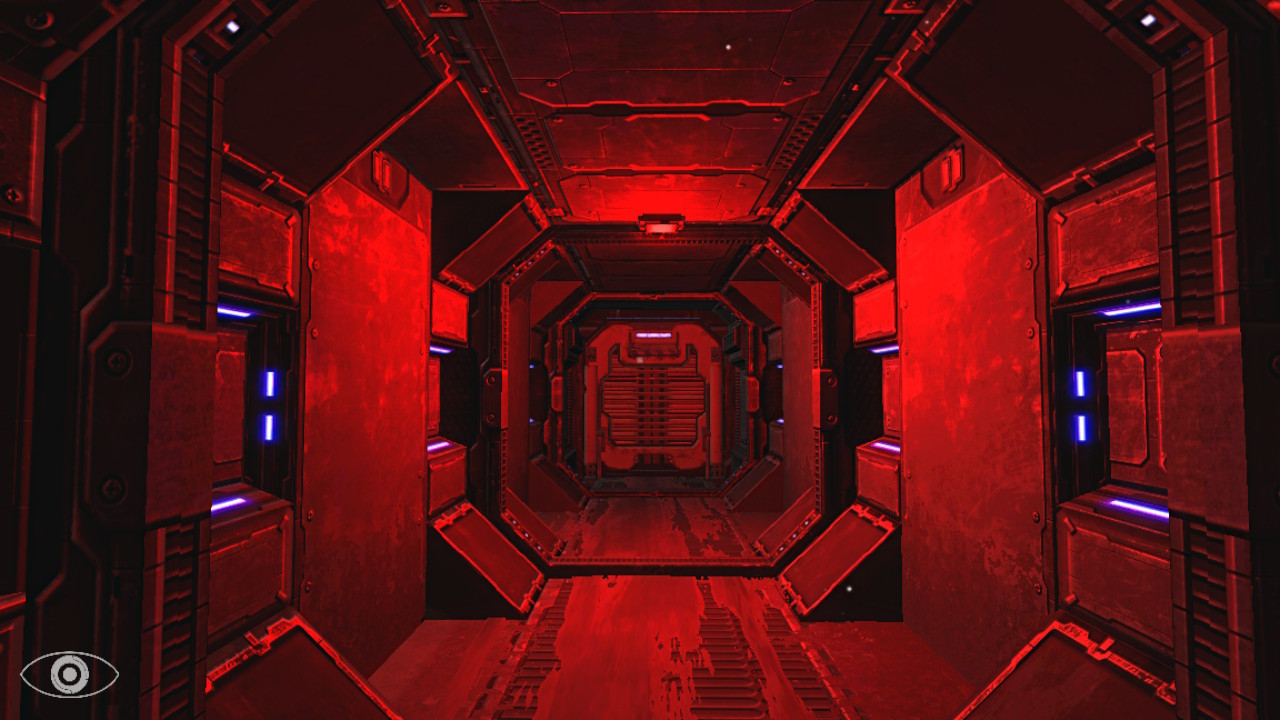 However, the mutated souls of previous experiment lie in wait within the shadows of the environment. These zombified forms are slow and cumbersome at the best of times; although they do have a tendency to jump out on you when you least expect it with the randomisation of their encounters, quickly disposing of you within a couple of strikes if you don’t have your wits about you. The game also contains a number of objectives that need to fulfilled in order to progress through the game. These come in the form of a find-and-fetch mechanic, such as searching for a pass-code that allows you to key its input into a closed-door. This element of the gameplay also creates a need to backtrack often, as certain criteria forces to revisit previous locations or retrieve missed items and clues.

Viewed from a first-person perspective, the atmospherics of this game provide a suitably scary setting; one that feels very reminiscent of similar environments and gameplay styles from franchises such as Event Horizon and Alien: Isolation. This is largely due to some rather exquisite visuals and audio qualities. The interior of the spacecraft is very dark and atmospheric with flickering screens and lights and hissing pipes and creaking hulls. It creates a very immersive and tense setting for the game and is one that forces you to be on your toes as look within every nook and cranny of its design; especially the ultra-effective shuffling of unseen mutants as they shuffle through the corridors or the within the same room as you.

There’s no combat within this game though. This is very much a stealth and hide style of play; forcing you to run from any unsavoury encounters and look around the environment for any suitable places in which to stay out of sight. These can range from ducking within the shadows under a series of pipes or climbing within the confines of ventilation shaft. It can create a lot of tension as your foe tries to seek you out; an element of the gameplay that is further bolstered by the use of a wrist-band that tracks your vital statistics; measuring your heart-rate and levels of infection within your body. This creates a style of play which forces you to move cautiously, which isn’t a bad thing as throughout the majority of the game, the ability to run is largely defunct. 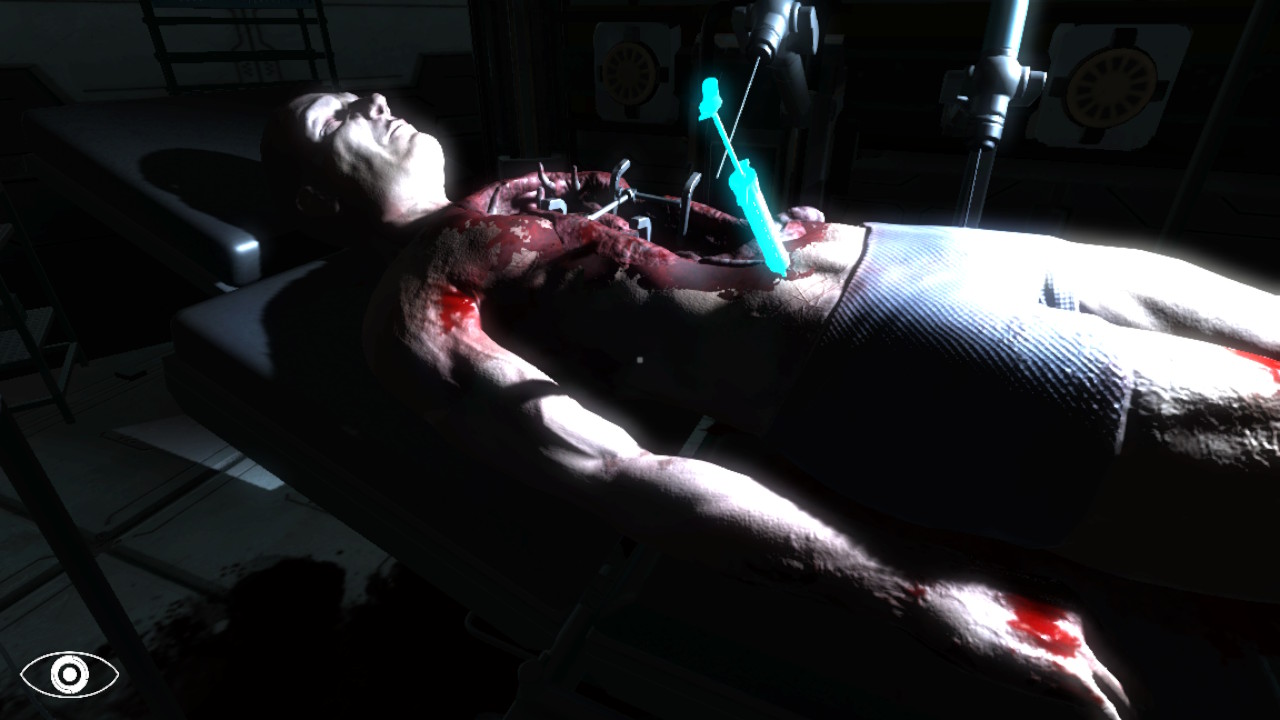 This all changes though as you begin to make progress to the latter stages of the game. Due to changes within the setting of the game, your environment becomes bathed in light. This not only reduces your chances of finding places of sanctuary, but also unleashes a host of dangerous adversaries. However, the pace of the game also picks up here, bringing with it more urgency and tension to the proceedings. This is also bolstered with the pattern of enemy encounters not being set in stone. Instead the game uses random generation in when and where these moments of horror happen; further increasing the sense of urgency and scares it tries to convey.

In terms of suspense, the game does a good job in keeping you very aware of your surroundings; looking out for any threats, as well as spotting potential hiding places, looking for life-saving syringes, solutions to a number of puzzles and story-driving PDF’s and audio logs. However, it also had to be said that this is also a game that comes with some frustrations and disappointments too. It’s quite an unforgiving game, with many enemy encounters resulting in your death. This isn’t necessarily a bad thing, but is an element of the gameplay that could, potentially, put off some players. The story is largely uninvolving too, becoming tiresome too soon until it reaches a point where you don’t really care about its plot or themes and begin to play the game just so you can reach the end; which won’t take too long as this is a title that can easily be finished within two to four hours, depending on your ability.

Overall, Phantaruk isn’t a bad example of a survival horror game; the problem is it doesn’t really do anything new or different from what you may have played before. However, its presentation and ambience are used to good effect here, as well as its random element of enemy encounters. It does create urgency, it does create some fear but it also frustrates in places. It may not be the biggest or longest game you may play, but for its pricing of less than a fiver, this is a game that represents superb value for money. If you’ve never played a survival horror before, or are a particular fan of its genre, then Phantaruk provides a good entry point or gives a good example of your favourite style of game. However, if you have played plenty of these types of games, then while it is a good title, it may not contain enough to keep you engaged for the entirety of its horrifying flight.

A good example of survival horror at a great price, although it doesn’t contain anything that hasn’t been done before.