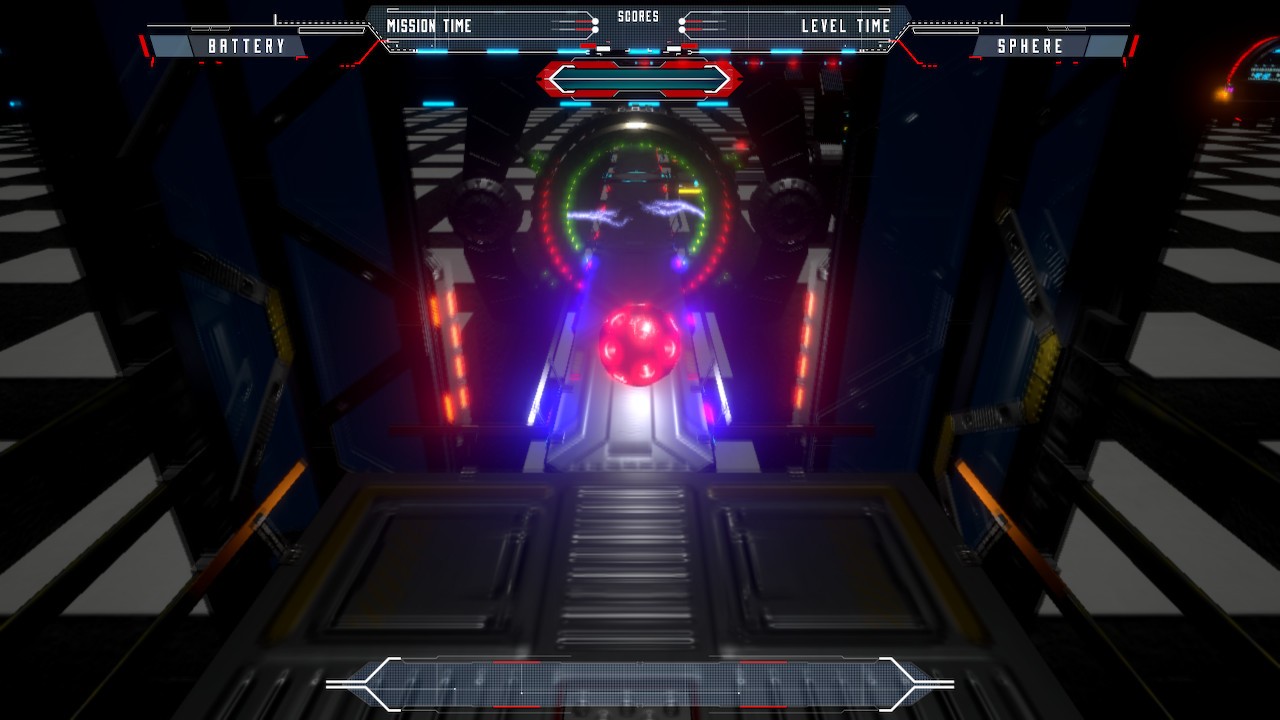 All of this, quite naturally, serves as a backdrop to the meat and potatoes of the game; namely rolling a huge ball slowly along a path to get from point A to point B. Along the way you’ll be performing all the platforming staple requirements, ie, balancing your ball, jumping from one path to another, avoiding traps and navigating your way around obstacles. One of the more unique elements of Technosphere Reload is that this is a slow, thoughtful game. Here you’re not rewarded for speed more for actually mastering the jump, back, forwards and stop controls well enough to complete the course.  The controls themselves are fairly intuitive with one stick controlling your direction and the other allowing you to shift the camera angle.  The A button lets you jump while pressing B will bring the ball  to a dead halt. 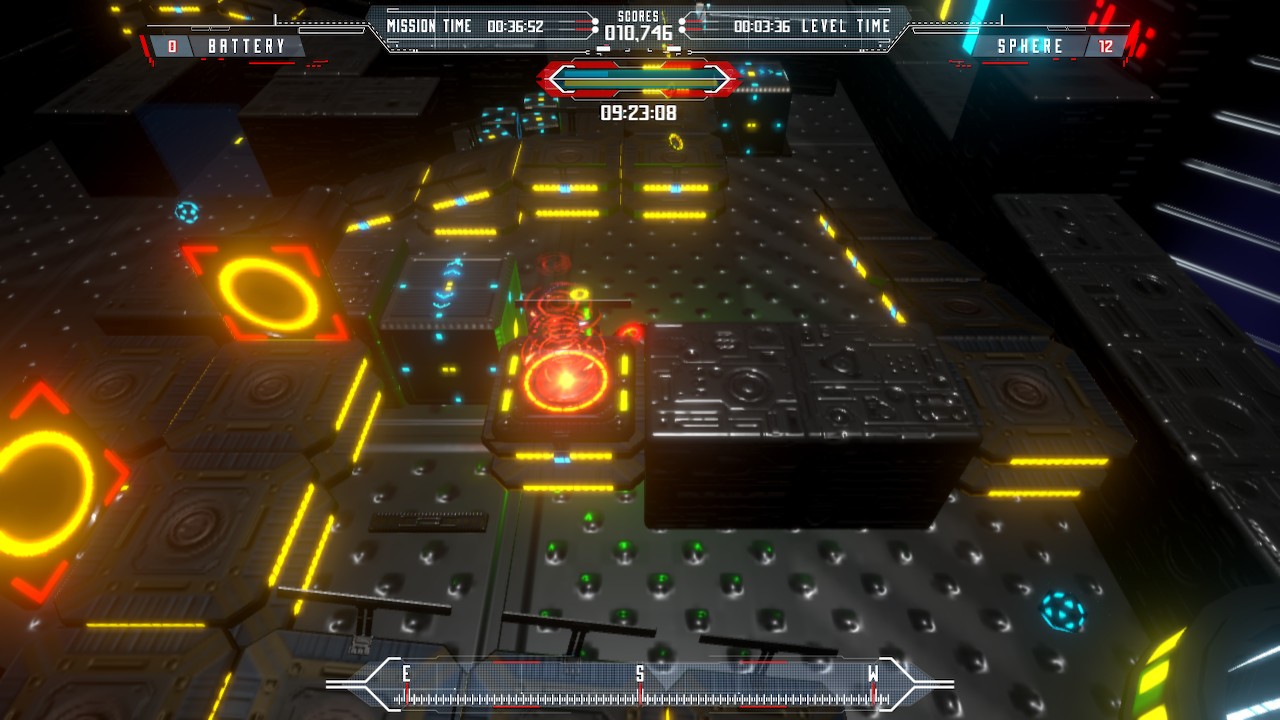 That simplicity aside, Technosphere Reload is a pretty unforgiving game. There are no manual saves and the checkpoints are fairly spread out.  Which means should you die (and you will die – often), you’ll re-spawn at the last checkpoint which may have been ten minutes ago. The game starts off easy enough during the first couple of levels but Adaptive Game quickly crank up the difficulty setting and that’s when you’re going to wish you could save your progress as you go along. Without the manual save option you’ll often have to replay the same part of the level again and again, each time holding your breath for that next checkpoint. At this point it’s worth mentioning that, unlike the aforementioned Katamari, Technosphere Reload doesn’t require you to figure out which way to go in order to complete the course.  You’re on a linear path and the challenge is to control the ball rather than navigate the best possible route to the exit.  There is a compass provided which gives you an idea which direction you should be going, but there’s no map as the developer probably (and rightly) decided that one wasn’t needed.

Graphically, Technosphere Reload is a very polished game. Inside the asteroid is dark (sometimes a little too dark) but the environment, which is filled with shiny reflective surfaces, gives you the feeling that you’ve been dropped into a machine world run by AI and invisible operators.  Think of the Metroid Prime world and you’re half way there. One minor niggle we had was the fact that there was no one else ever in the game. No spectators, no rivals, no guardian from Earth or watcher. Just you and your ball. 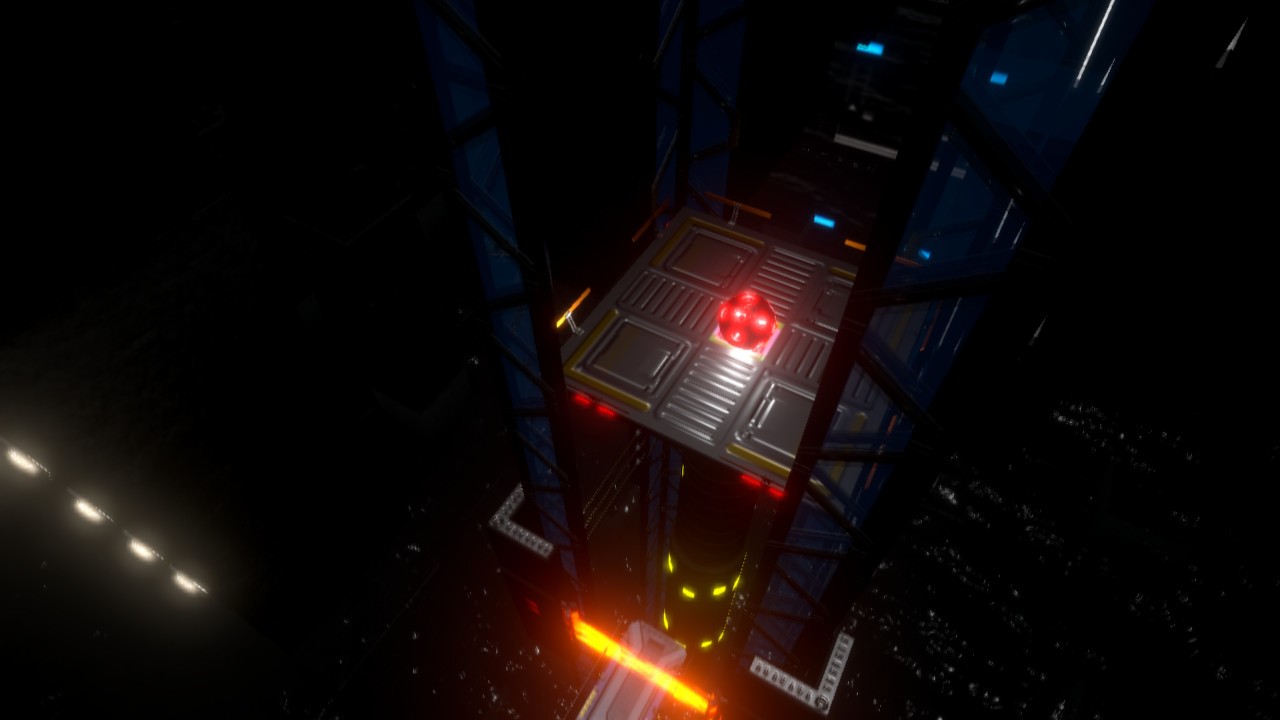 The in-game sound in Technosphere Reload is equally Spartan. As you roll your big ball along the path you’re accompanied by a mechanical whirling sound that speeds up or slows down according to how fast you’re travelling. Should you drop off the path, the ball will fall and you’ll be met with a meaty and authoritative explosion as you get ready to re-spawn.

The game also had odd and unnecessary mistakes which raised my eyebrow. For example, at a checkpoint it says “Save you progress while you in the game.”  Granted this is a minor point but it is one that could – and should – have been ironed out prior to release.

After a week or so with Technosphere Reload, I was left conflicted. The game was pretty to look at but dark and uninspiring, difficult in places, but, due to its slow pacing, not very exciting. For anyone looking to satisfy their ball rolling urges, then Technosphere Reload may just be what you’re looking for. For anyone else expecting a reboot of Katamari you may be left unsatisfied.

For anyone looking to satisfy their ball rolling urges, then Technosphere Reload may just be what you’re looking for.  For anyone else expecting a reboot of Katamari you may be left unsatisfied.