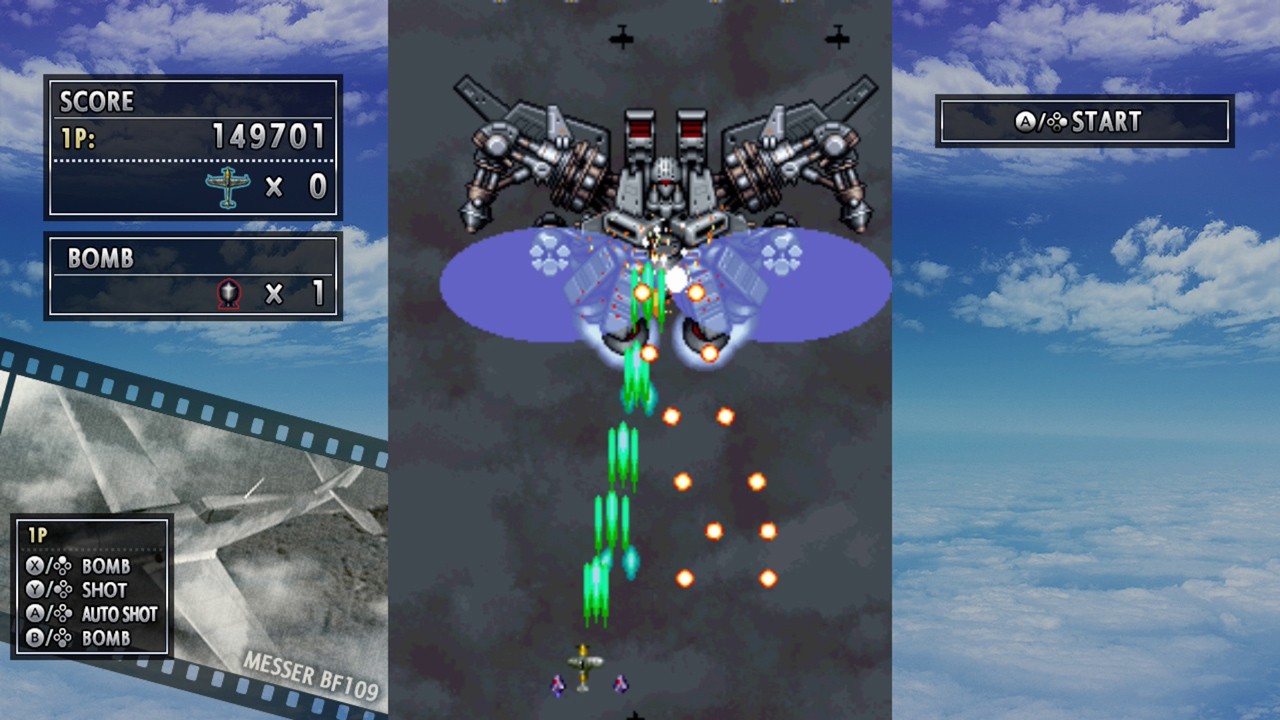 How much do you love bullet hell games? Like, this is an honest question, and very pertinent to what you’re about to read. If you’re just sort of “alright” with playing the vertical and horizontal shooters that involve more dodging than shooting, then you might as well bail on this article immediately. Everything you’re about to see has to do, heavily, with a massive amount of shooting games at what some would consider to be premium pricing. Which is insane, because the prices for these individual games would amass to more than the price tag on the software. Isn’t it weird how you can get someone to pay eight dollars five times and it’s perfectly acceptable, but asking for forty dollars all at once is considered gauche? Humanity and capitalism are weird, but that’s why we are where we are. Anyways, Psikyo has done a phenomenal job (through NIS publishing) of making sure their name is well known and remembered on the Nintendo Switch, and their latest release, Psikyo Shooting Stars Alpha, is probably the best bang for your buck available.

We should start with the bad news, because everyone loves bad news. If you’ve been an avid follower of the Psikyo releases onto the Nintendo Switch, there is almost nothing for you here. The Shooting Stars Alpha collection consists of six games; Strikers 1945 I, II and III; Sol Divide; Zero Gunners 2; and Dragon Blaze. The only title that hasn’t received a release so far is STRIKERS 1945 III, and that is a really, really hard sell for someone to reinvest all their time and money. Additionally, other than it all being organized into a single collection, there’s also no real incentive for players to get the game because there isn’t anything extra here that isn’t in the individual games. There are no shiny bonuses, no behind-the-screen documentary or story boards or concept images. Just six titles on a carousel to decide between and then you load it up and that’s seriously it. For people who’ve been waiting for a physical release of the Psikyo games to keep in their growing library of DVD cases for tiny cartridges, it’s certainly a good thing (everyone is so paranoid about losing digital copies once a console retires), but, for digital collectors such as myself, it does the duty of finishing the STRIKER 1945 trilogy and narrowing things down to a single icon, but damn that’s not necessarily worth the cash. 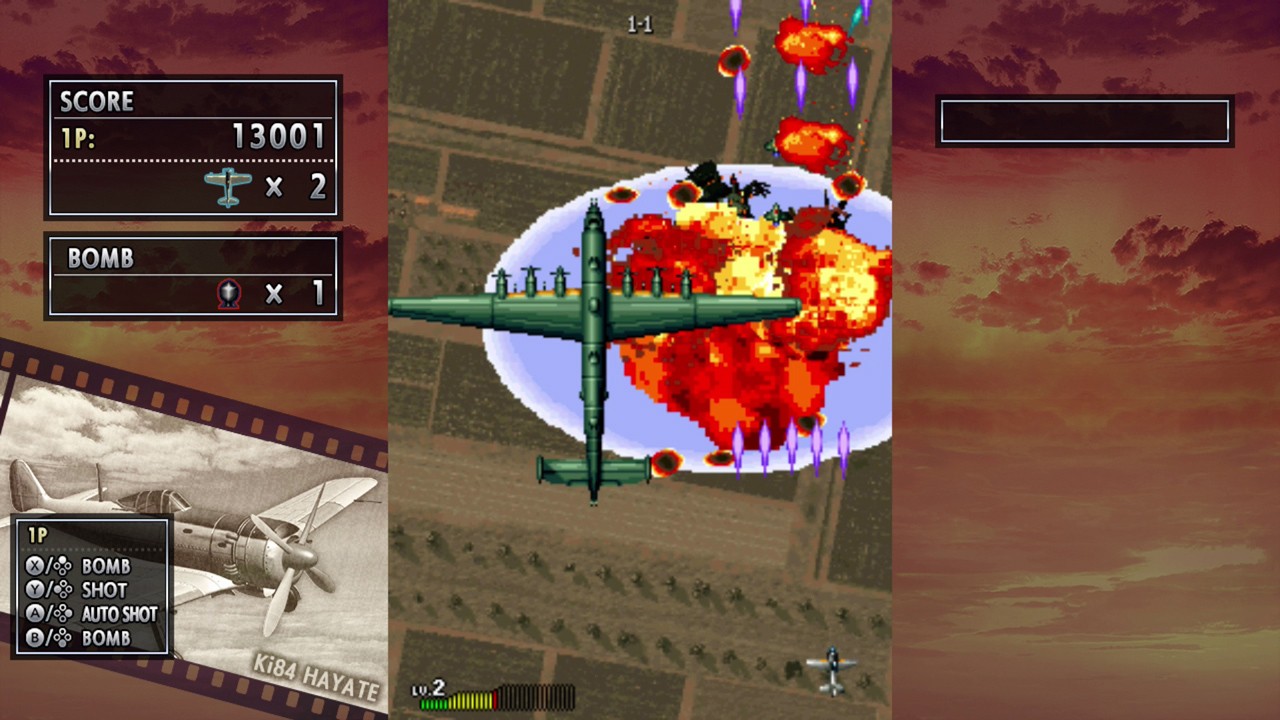 Now, with that unpleasantness out of the way, Psikyo Shooting Stars Alpha is a fantastic situation IF you only own one or even two of the aforementioned titles. As I’ve said before, Psikyo really knows how to make danmaku games with a certain flair and aplomb, and that’s no different here. If you’ve a fan of the traditional vertical shooter, the STRIKER 1945 series should each be appreciated in a different way. The first game tends to focus more on different wave structures and approaches with some plane designs that are very classic and identifiable. The enemies grow in difficulty gradually, though, if you set the game to either the “monkey” or “child” setting (levels one and two respectively), you won’t have a single issue getting through, and you may not even need to use a bomb. STRIKER 1945 II is more of the same, though the game begins to feel like a bit of a departure from what you originally knew and loved with more of a wild and sort of fantastical approach to both your own plane and those that you fight in the sky. We see more transformation ships: enemies that start as one thing and transmutate into another after a certain amount of damage. Both of these titles are amazing, and the sudden change in dynamics for the third might be why STRIKER 1945 III never received an independent release. There are only four difficulty settings (really boiling down the fine lines), and the jets go back to more “regular” designs, but there is a definite uptick in the need to do better weaving and dodging as a result of removing the lower difficulty settings. I don’t know, I really liked it and was surprised I didn’t get a chance to play it earlier. It had a bit of crispness that you don’t get to see in classic shooters (they tend to feel more round and soft in hit boxes), and felt super comfortable and natural. Oh, if you still don’t have a FlipGrip or something similar, hurry up and get one: there’s nothing better than turning your Switch sideways to play a vertical shooter with the best real estate gaming can offer.

Once we depart from the STRIKER 1945 series, we see some familiar faces that may or may not land with people. Sol Divide is a really unusual but incredibly exciting horizontal shooter that I got a chance to look at last year, and I appreciate having it here in the Shooting Stars Alpha collection. Too many people want their shooters to be more of the same, be it a Gradius knockoff or an Ikaruga inspired idea or something that looks like CAVE had direct input, but putting a twist on the approach and still calling it a bullet hell is totally deserved. With Sol Divide, the game where you play a hero named Vorg and you gotta shoot, swat and spellcast your way through multiple choices on a quest to stop a demon from being a demon. The game is so demanding in terms of asking you to use combat versatility while also dodging and staying alive that it captures your attention and keeps it in a stranglehold. You need to completely relearn how to do shooting games in order to be even moderately successful, and it’s one of the few shmups that have multiple playthroughs baked in thanks to branching choices and a serious variety in the approach style from the other characters. This is like when you have to get the entire variety pack of Lay’s snacks and finally give Salt and Vinegar try. Like, you probably wouldn’t have bought it yourself, but you might as well because it’s here and it could turn out to be your new favorite flavor. It’s still a pain in the pass, but Sol Divide reminded me how interesting it was, and I appreciate that.

Dragon Blaze is what happens when you think you can copy a vertical shooting property and then turn it into some kind of Pern variant, and I don’t totally hate it. All matters of storyline aside, Dragon Blaze is a cool interpretation where we forsake either the historical aspect of shooters (STRIKERS, 1945, etc) or the sci-fi aspect (anything in space, invading aliens, etc.) and instead lean heavily into fantasy to make you choose one of four elemental dragons and blast the hell out of oncoming beasties that either look Lovecraftian (f you do Sonia’s path) or more traditional Dungeons and Dragons sort of ideas. There were a lot of things I loved about this title. Not only was it varied by which of the paths you chose (each of the heroes starts in a different sort of format), but it used a better, more exciting type of combat change. Besides blasting from afar and also using a bomb, you had the rechargeable opportunity to send your dragon to attack a particular enemy, which was great for larger enemies and bosses. Without the dragon, you appear to move more sluggishly and can be taken out more easily, but keeping the dragon means a larger hit box and not using offensive techniques to the best of your ability. It was really cool, and I hadn’t gotten a chance to play this one before, so, hey, new to me. Also, it was the only game that had a soundtrack that really felt different from the others. Sol Divide has a bit of a dark tonality to it, and Zero Gunner 2 (which we’ll touch upon in a moment) was probably the most modern and diverse, but Dragon Blaze felt like the soundtrack that a dungeon master might play while trying to get you into the mood for the campaign he worked on all last weekend. Highly recommended, don’t skip this one (and you can play it vertically!). 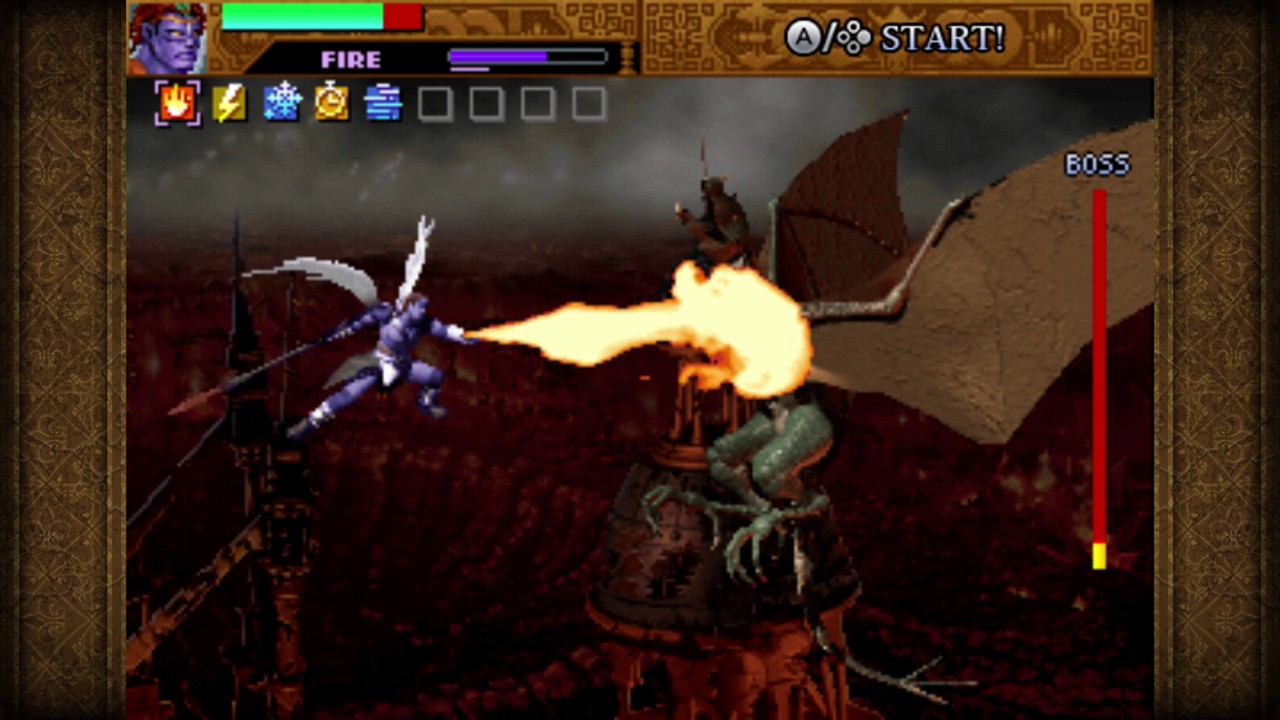 Lastly, but certainly not least, is Zero Gunner 2, the biggest swing on the part of Psikyo and NIS. It’s a horizontal shooter, but it’s also sort of not. Choosing one of three jets, you have to shoot enemies that are coming from all directions in various waves, and you accommodate these beasts by being able to pivot on the screen. Using a crosshairs as a pivot point, your airplane can spin on a dime and unleash hell in all directions, which totally changes your gameplay approach. You can, additionally, continue to move about the screen, so you aren’t limited to a narrow field for where you can play. This sort of game and shooter is what I really like to see happening in games, in which developers aren’t afraid to mix up the formula and try a little something different. Instead of it just turning into another shooter with short stages and some bombs and explosions, it becomes a multi-staged, multi-leveled approach with innovative ideas regarding how to keep both the player on their toes and make the challenge somehow familiar. Additionally, the layout does change depending on which plane you choose: different acts will unfold in different orders, so there’s a sense of diversity without needing to reinvent the wheel. Lastly, Zero Gunner 2 is the final shooter that Psikyo made before shutting down their studio (okay, there was a Cho Aniki title, but those are never coming to the West) and was made for the Dreamcast. The additional hardware and home console focus of the game means that it ports even better to the Switch than the other titles (which primarily were intended for the arcade). It’s crazy amounts of fun, with a bumping soundtrack, crisp graphics and some truly dynamic takes on incoming bullet waves.

Psikyo is such a fascinating studio, and I’m glad that Zerodiv and NIS remember them fondly and continue to give their classic catalogue new life. While I wish that we could have seen Cannon Spike on the table, it’s fantastic for the Shooting Stars Alpha pack to have these great games in a single title, and making things accessible for longtime shooter fans and newcomers who want some variety to add to the gaming library. It might be hard to double dip if you’ve gone four for five with eShop purchases, but it’s not unreasonable if you’ve only gotten a couple, and it’s a damn bargain if you’ve never picked up a Switch Psikyo release yet. With great bordering, full menus for orientation change and game reset, and plenty of that classic arcade feel coupled with modern porting, it’s easy to see why these games are all true Shooting Stars.

All of the Switch released Psikyo shooters come home to roost (with one additional guest!) giving convenience and variety to the fans of bullet hell games.