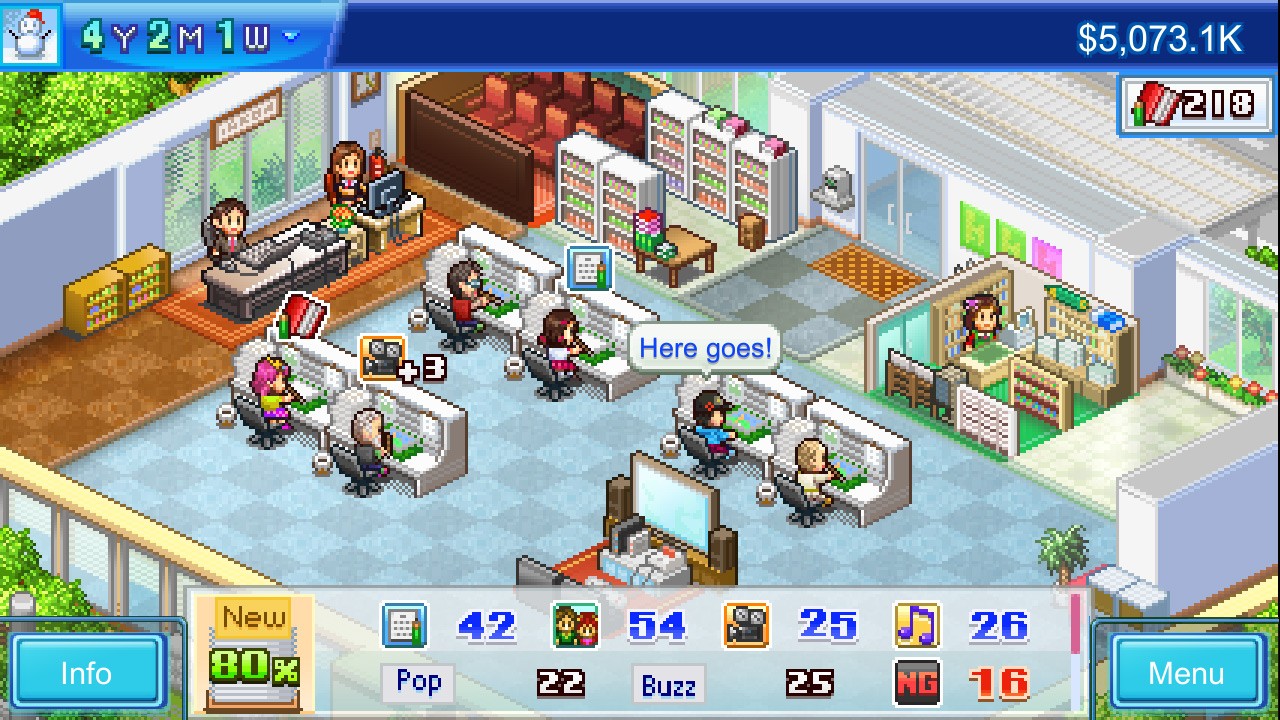 As the Switch’s popularity grows, it seems more and more games are being ported from mobile devices in order to reach a new gaming demographic. Those who love games, but avoid mobile gaming. Anime Studio Story is no exception. Originally an iOS / Android title from Kairosoft, the game pits you as the budding CEO of a small anime studio.

The games premise is simple, hire staff, make cartoons for networks and don’t lose money. To make an anime series, you have to pick themes and a lead character, using the skills of your hired writers and directors. This then has opportunities to be developed as time goes on and your animators bring the story to life. Then there is a final screening for the staff before editing and sending out.  All this sounds complicated but the level of input the player has here is minimal. The game uses two forms of currency, cold hard cash and “production points” which need to be used for certain aspects such as levelling up your staff.

Occasionally, during the process, a member of staff will ask if you are prepared to spend production points and cash to let them experiment, the more points you spend the greater the likelihood of success, up to 80% success each time. Completing the task nets you more points to add to the quality of the anime. Failure however, creates more “NG” scenes that you then have to edit out, slowing down the release of your latest creation. 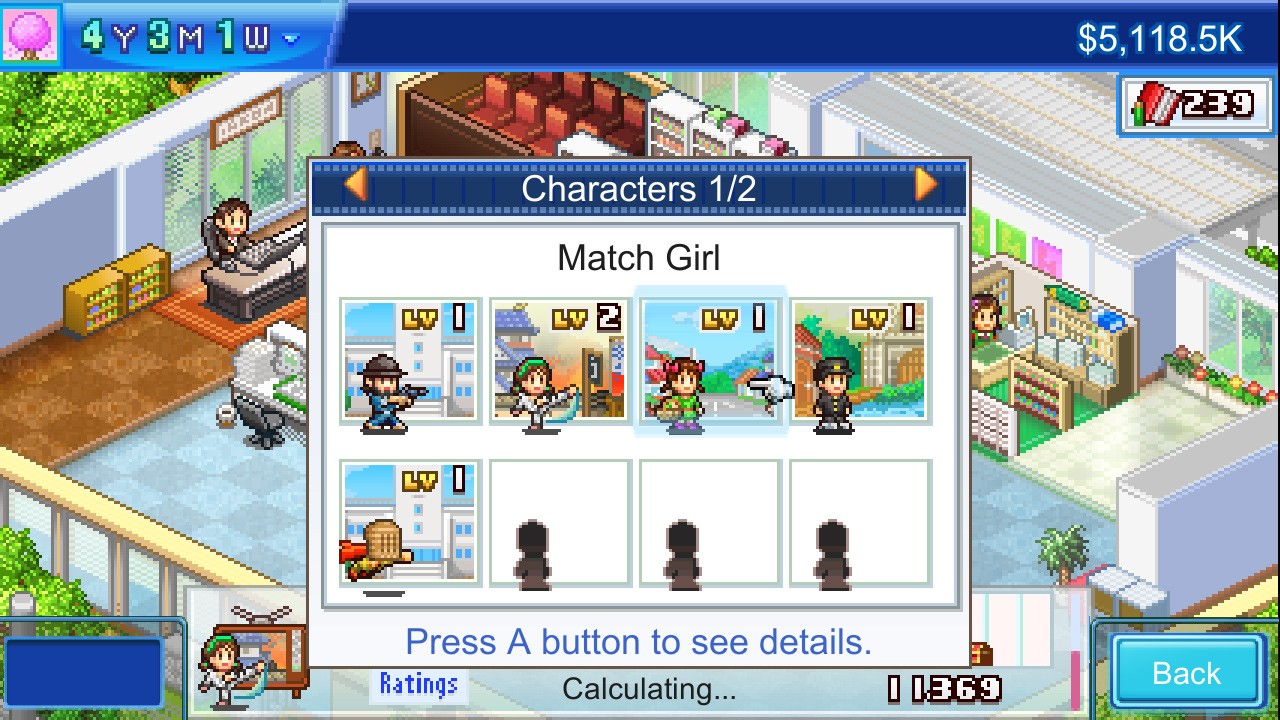 As the production drives on your staff earn points for writing, characters, videography and music and these can be increased by improving the skills of the staff working under you. Staff can gain exp and can also level up, which increases their final yearly salary. Finances come out at a set point each year, and the tutorial makes sure you know when this happens in your first year.

Once your first few series are released, feedback from studios and fans give you an idea of where to go next, and performing certain tasks often unlocks more content to try out, for better or worse. But besides hints from studios and your staff, there is little in the way of a “winning formula”; some combinations just do better than others and there is no real logical reason as to which ones you should go with, creating a very small degree of risk as you progress in the game.

One big draw is the ability to name your series and characters. The game also has an awards ceremony at the end of the year where your competitors entries read like an homage to slightly off versions of anime you know and love. It was always amusing to see what titles beat you to an award, just to see what the name was going to be. There is also something satisfying at times of naming your characters after your own likes, interests and indeed, friends.

The game itself is an addictive alternative to what i refer to as “games to play when tired”. It doesn’t require great amounts of thought to enjoy and isn’t so easy as to be boring, but also doesn’t tax you to the point of frustration. The first few series you make will be cheap, and not make much profit. But slowly you build and improve your empire. In my first play through I managed to make a complete dud (who says students in the future with mutants is a bad anime?!) which set me back almost two in game years while I completed “subcon” work to balance the books enough to try again. But I found myself devoted to making sure my company thrived, buying upgrades, hiring and training staff and eventually upgrading the premises. 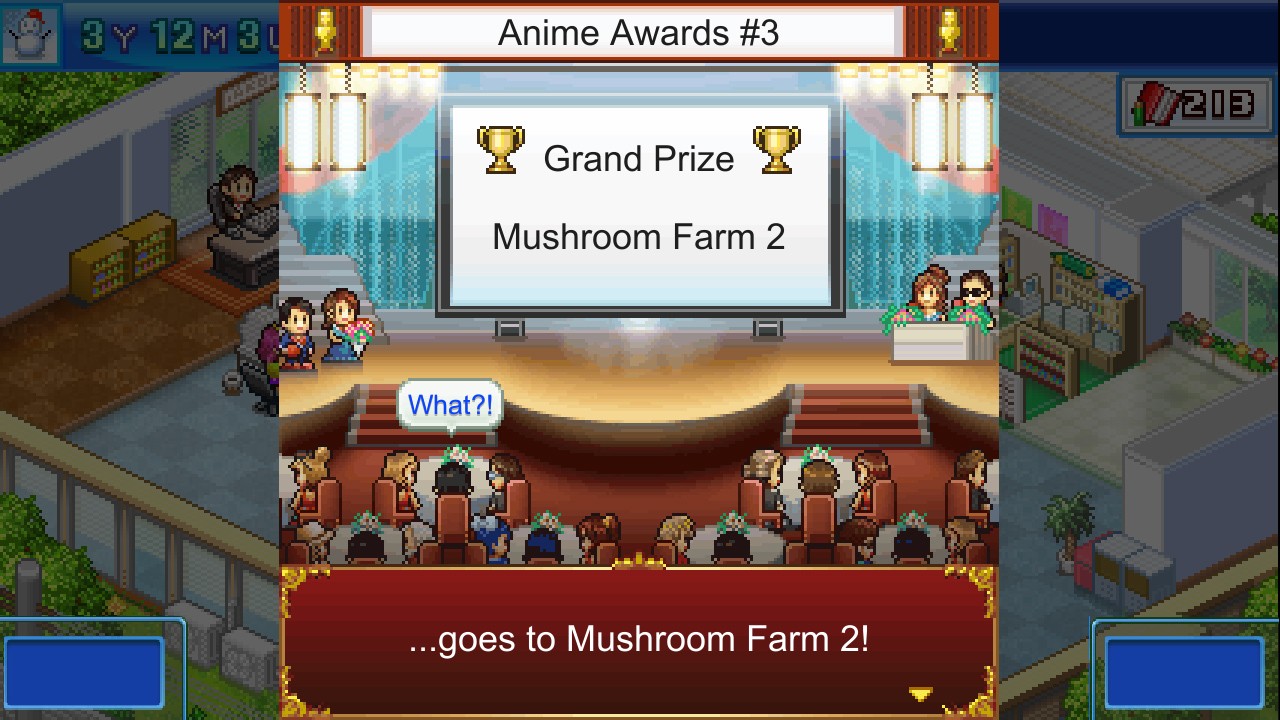 Graphically, the 2D pixel sprites are very reminiscent of games like “Pocket Planes” and “Tiny Tower” and the design certainly gives off that feeling. Musically the game won’t be winning any awards, but as the soundtrack isn’t a major factor in the game, its perfectly acceptable to mute it and enjoy your own selections.

Eventually you reach a point where the game “officially” ends, at this point it takes your high score and saves it. However, you are free to continue to build your empire in the way you see fit and finish off any goals you have left outstanding. It simply caps your score for the first few years. Starting a game new allows you access to what you have already unlocked, making subsequent games easier. Although this makes me question why cap the high scores as your progress should, in theory, improve with each subsequent play through.

Ultimately there is little actual substance here. But that doesn’t mean it isn’t a fun game to play. There are just enough interactions and incentives to draw a player in and make them spend hours on their own invested anime utopia. Replayability, I’d say, depends on what else comes along while you are playing. I felt like one run through was enough to see what styles and characters became available, but for those who enjoy unlocking content, there is plenty there.

Originally an iOS / Android title from Kairosoft, the game pits you as the budding CEO of a small anime studio. Hire staff, make shows and reach anime stardom.