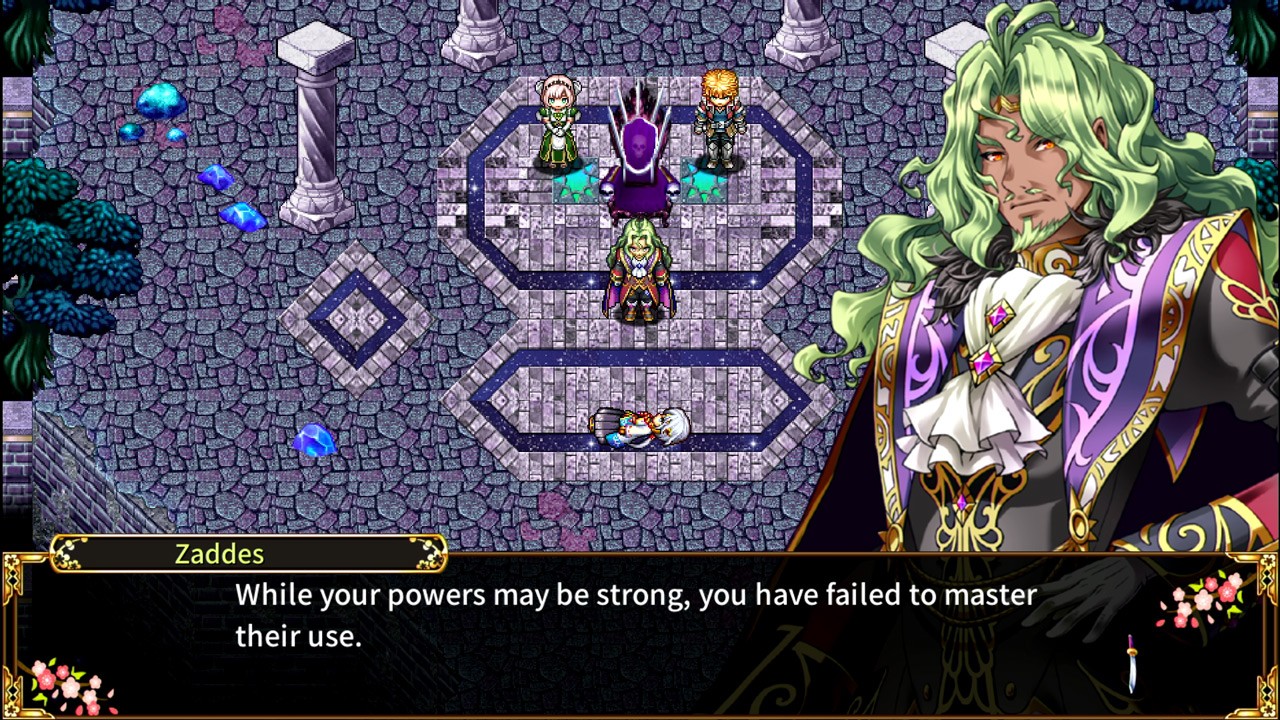 The Nintendo Switch has become the go-to console for fans of JRPGs thanks to the incredibly wide selection of games on offer, from mainstream gems like Final Fantasy to hidden delights aplenty. One such series that has found a new home on Nintendo’s portable console is the Asdivine series of games by Kemco, which originally found its audience on mobile.

While mobile games can be somewhat divisive, the Asdivine games have endeared themselves to audiences thanks to their solid gameplay and decent stories. The series has already outgrown mobile and the recent migration to Nintendo Switch raises the question – do the Asdivine games have what it takes to stand among the best JRPGs on the Nintendo Switch? Well, as someone who’s never played an Asdivine game before, the Japanese lore-inspired Asdivine Kamura is my introduction to the series, and let’s see how it shaped up.

Asdivine Kamura begins with the spirit deity Shiki, fighting to retain his title as reigning deity of Asdivine. Despite his best efforts, he is quickly overpowered by Zaddes, God of Destruction, and in his final moments, scatters his powers across the world in order to prevent Zaddes from taking full control of this world.

Waking on the shore of an island with very little of his divine powers remaining, Shiki is forced to face the reality of the situation as the world he once knew has become warped due to Zaddes’ position as Spirit Deity. It is therefore up to Shiki and the small group of women he befriends to fight back against Zaddes, right the wrongs of this new Asdivine and ultimately restore Shiki to his rightful place as Spirit Deity.

This is no mean feat, however, as Shiki and the girls must travel the world, all while fighting terrifying creatures and collecting Mystic Orbs, the physical manifestation of Shiki’s divine powers that, if left unchecked, have the potential to cause tremendous destruction.

The story of Asdivine Kamura is honestly pretty impressive and very reminiscent of old-school JRPGs, with just enough intrigue and heart to grab any fan of the genre and keep them invested throughout the solid 20-hour journey. 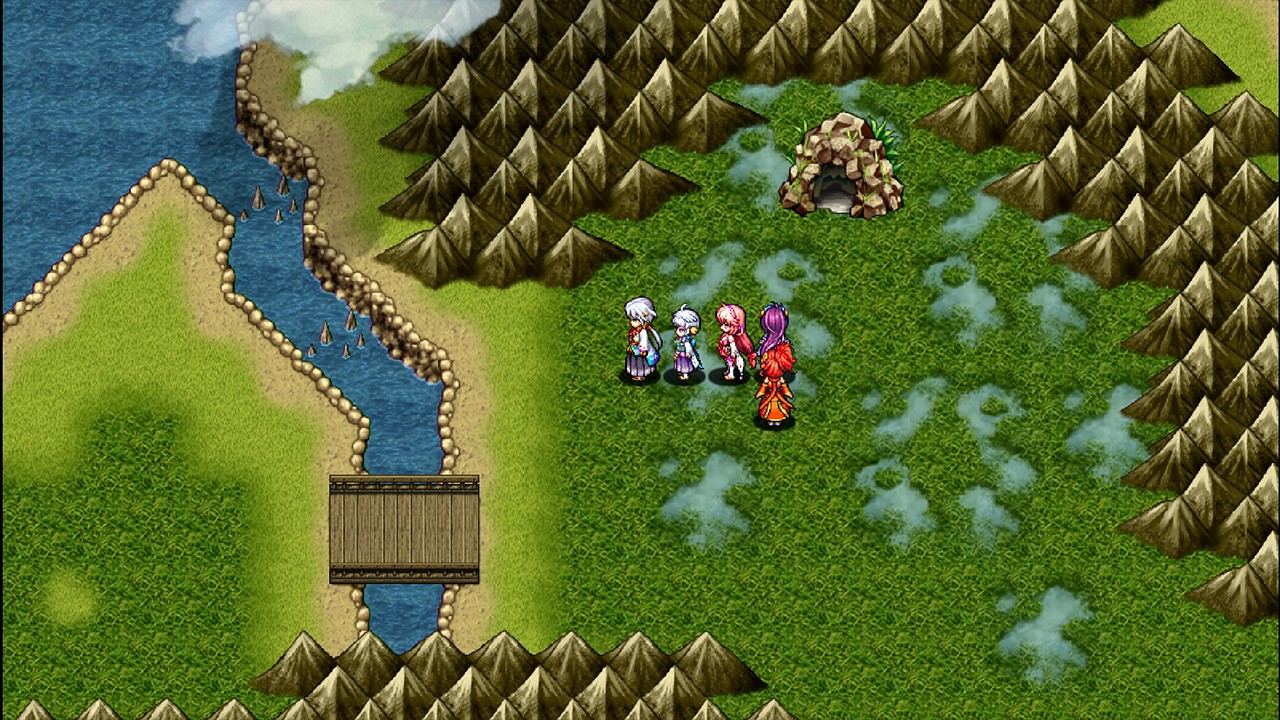 Characters are likable and the story doesn’t take itself too seriously, splashing more than a few jokes throughout that both help lighten the mood and frame the more heart-wrenching scenes to make them all the more poignant. Personal favourites for me were the Samurai with a height complex, Ayame, and Priestess in training with a love of monster stew, Sakura.

Every character has a quirk that helps set them apart from the boring throngs of JRPG mediocrity, although it must be said that the development of characters can be a little lacklustre at times – what little character development Asdivine Kamura has it does well, but it does leave you wanting for more.

From a visual perspective, Asdivine Kamura also makes a solid first impression. The pixel sprites and retro-inspired world are endearing and lively – even if environments can start to become stale after a while.  Character art is sparse, with the main cast being the only notable characters to receive character art, but what little art there is executed beautifully, with vibrant colours and interesting designs that capture the essence of the characters wonderfully.

Dungeons and towns in Asdivine Kamura are a little bland and feel as though they’ve been copied and pasted from one location to another, but with a little rework to help make them feel just different enough to keep things fresh. Are they the most imaginative towns I’ve ever seen in a JRPG? No, but I’ve also seen far worse.

Combat in Asdivine Kamura sticks to the tried and true staple of JRPGs: turn-based battles. While it doesn’t attempt to reinvent the wheel, its simple but addictive charm makes combat a joy. In combat, you take control of Shiki and his female companions in 3×3 grid-based battles. While, visually, the character sprites are simple, the small amount of animation goes a long way in helping the battles feel dynamic. 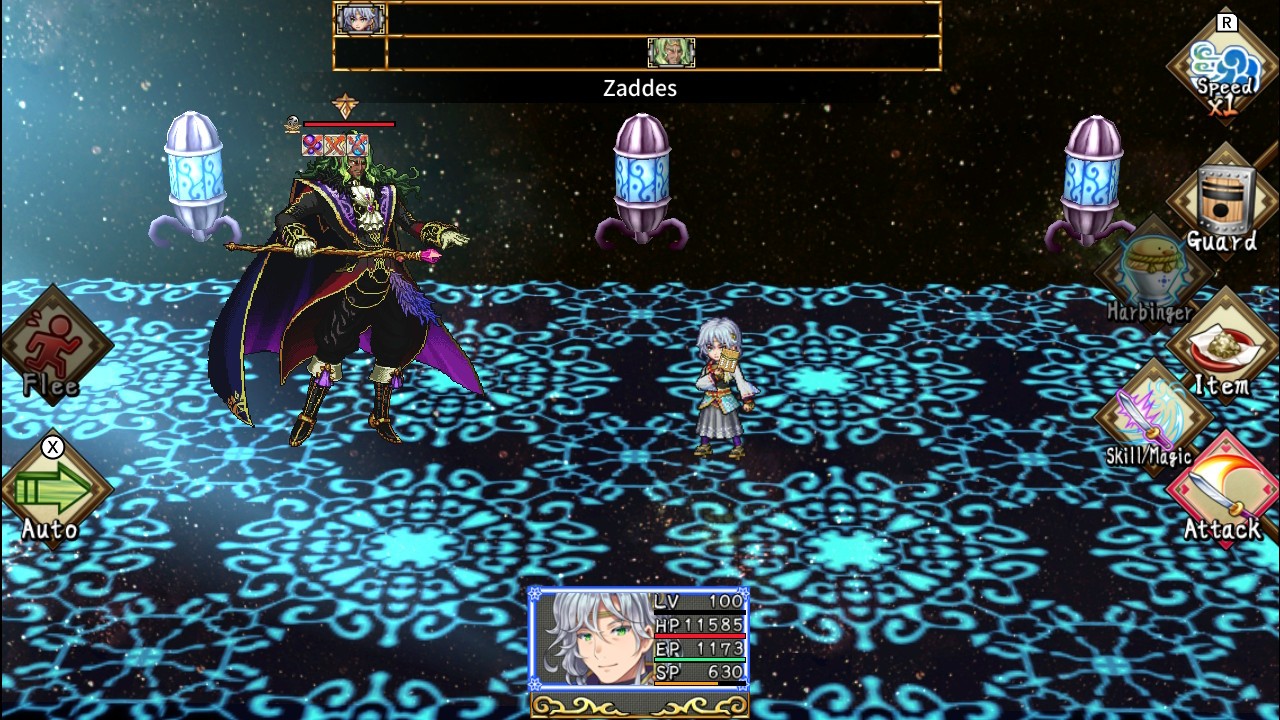 Additionally, the way combat is structured, enemies can occupy a number of spaces on the battlefield, and in turn all attacks and techniques will have a set panel range, adding a strategic element to every battle. Players will often find themselves having to decide between hitting all enemies with a high MP skill to end things quickly, and single-hit skills to conserve MP for tougher fights later on.

In addition, Asdivine Kamura mixes up the combat by allowing players to equip and summon Harbingers, the spirits of the world, which in turn bolster your ranks with all manner of creatures and objects that can help turn any fight in your favour with powerful battle and support techniques.

These harbingers aren’t just for show, as in tougher battles, or battles where you’re vastly outnumbered, the ability to summon and wield these creatures becomes invaluable, as it can mean the difference between victory and crushing defeat, either with their devastating attacks or simply by acting as a decoy to draw enemy attention.

Now, while Asdivine Kamura is a really solid experience overall, there is one drawback that sours the experience a little, and that’s the soundtrack. Asdivine Kamura has a limited soundtrack and, while the tracks aren’t bad, they are pretty forgettable. To make matters worse, the tracks are recycled time and again, and when you cycle between the over world and combat, tracks will reset, which can become a little grating when hearing the start of the same track over and over after every encounter.

Asdivine Kamura is a fantastic retro-style JRPG that I would definitely recommend to fans of the genre and newcomers alike. The solid story mixed with decent characters and an art style that forms an identity all its own is refreshing, especially for an indie title. The different endings on offer lend a small degree of replay value, but the biggest draw of Asdivine Kamura will come with your initial playthrough, where this JRPG is a surprising gem that keeps players interested and eager to go back for more.