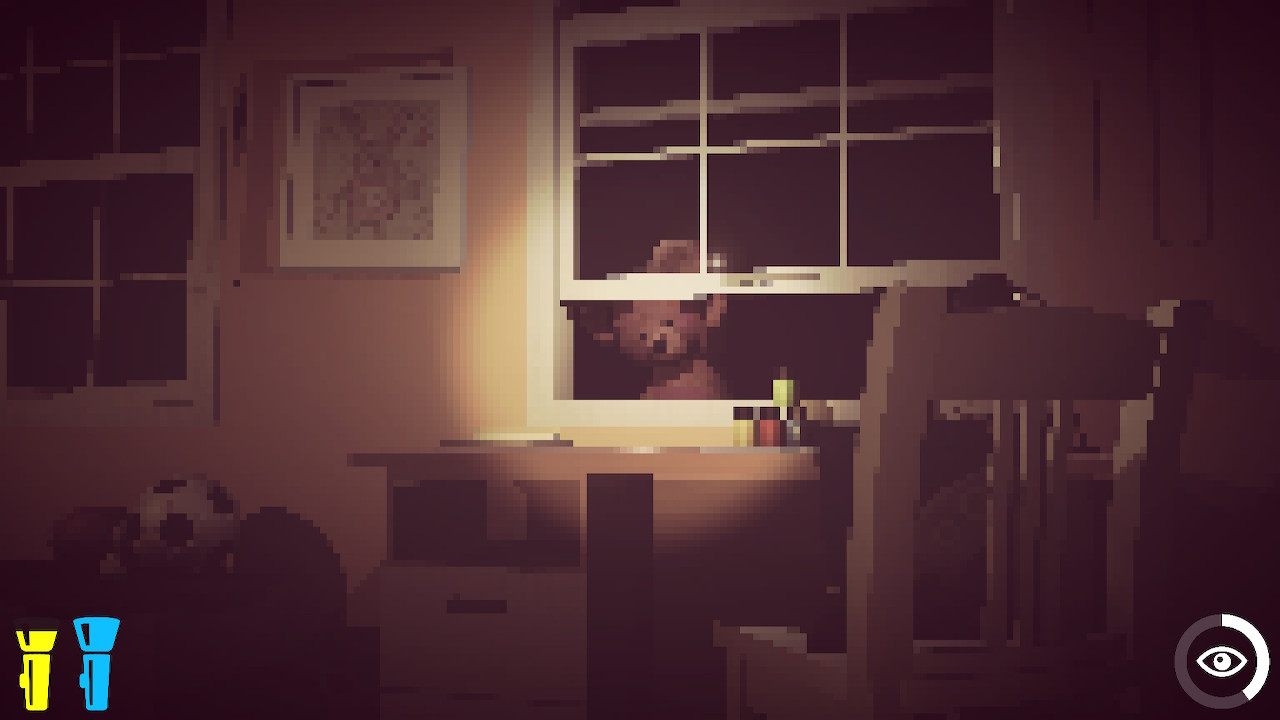 Bedtime Blues is a 2018 horror game developed by HannMade Studios and published by Forever Entertainment S.A. for the PC and the Nintendo Switch. HannMade Studios is a one-man effort of Mark Hann and has released a number of horror games on Itch.io, including Dark Veer and The Child’s Sight. With the understanding that Bedtime Blues is developed by a one-man develop team and comes with a mere $10 price tag, Bedtime Blues an effectively styled, tense and fun game; despite some small gameplay issues.

In Bedtime Blues, you play as a young child on the night of their fifth birthday, whose new toy teddy bear comes to life as they fall asleep. You must make it through the night by staving off the teddy’s attacks with your trusty flashlight.

During the gameplay of Bedtime Blues, the player lays in bed and rotates their view around their room to rebuke encroaching enemies. The player must dispatch the advancing stuffed animals in a multitude of manners: shining their light on some, closing their eyes to let others pass, and turning off disturbing sources of noise in the room.  To complicate things, the player’s flashlight requires recharging every few flashes, and the noises that appear in the room — like the alarm clock — increase the enemy’s movement speed. Taking out these endeavors individually is simple, but a single bear making it to your bed means game over. The true fun of the game comes in the later levels, where the opponents advance often and simultaneously, creating a more tense dynamic between shining the flashlight at advancing bears, keeping the flashlight charged, closing eyes to get sleep, and turning off noise sources in the room. Does the player risk a few more seconds of shut-eye before shining the flashlight at a bear? The harder levels force the player to come up with unique strategies to advance the levels, such as prioritizing the noise sources over bear appearances, rotating the view of the player while their eyes are closed to be as efficient as possible with the player’s time, or rapidly opening and closing the players eyes to verify when certain bears disappear. This inherent gameplay balance is incredibly tense, strategic and creative for a game with as simple a premise as Bedtime Blues. 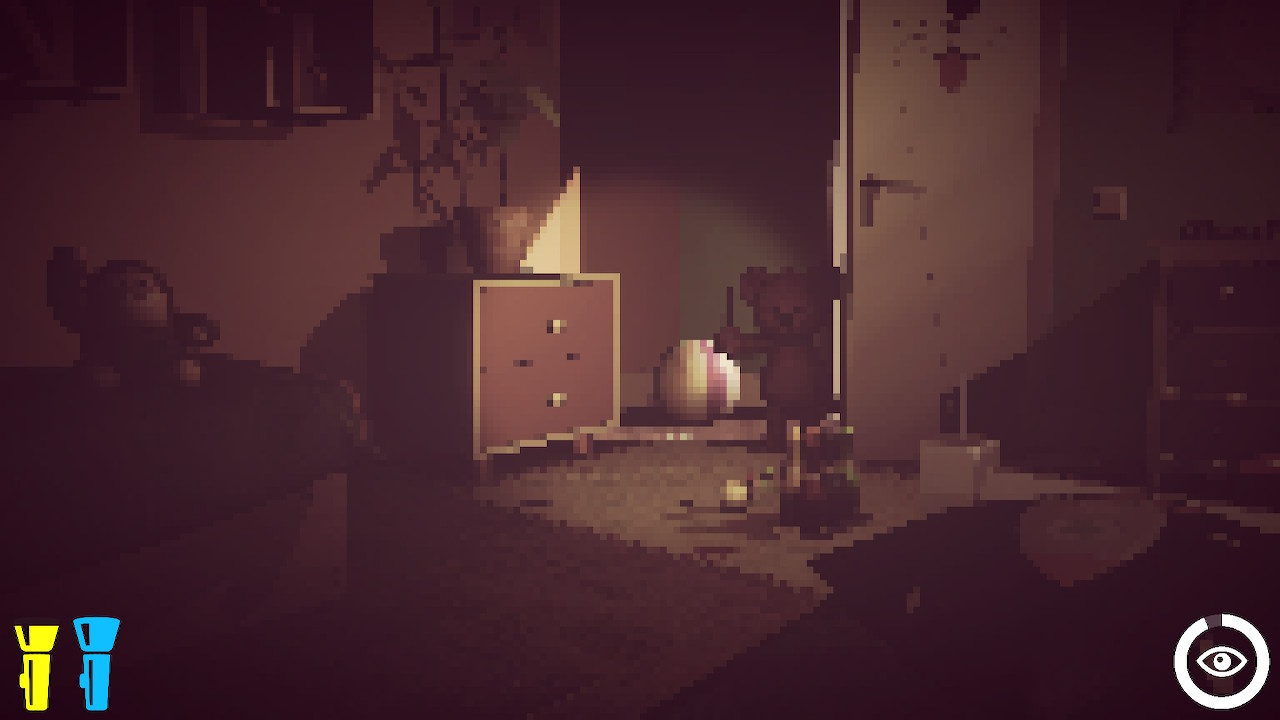 While the core is solid, a few small parts of the game don’t work perfectly with the others. When multiple bears arrive at the same time, certain audio cues override others, causing the player to completely miss certain advancing enemies. Additionally, one bear requires the player to keep their eyes closed to let the bear pass. This bear has no audio cue – which adds a layer of tension to the game but makes the game decidedly more difficult. Additionally, I had this bear attack me even when my eyes had been closed, making the game feel inconsistent and partly up to chance. I eventually found a strategy to avoid this (open and close your eyes until the bear disappears)  but this felt like a hack and not a true solution.

Bedtime Blues runs the entire world through a pixellated filter, making the world feel like a muddy, but still charming, retro game. The filter gives the game a unique vibe, as if out of a genesis era full-motion-video game, or a low-res original PlayStation game. I love this unique retro look, and it combines with exceptional golden glowing light from flashlights and windows that creates a super unique environment. These different filters and lighting effects make the most out of the small, simple level space. The bears feature no animation as they advance, just appearing closer and closer until the bear attacks with basic animations, this lack of animation is a little creepy, but it also feels lacking in polish. The Game’s menu is bare bones, listing the modes, settings, controls and credits; but not adding anything to the total presentation package. The audio design is perfect and essential to the game, with key sounds indicating when and where enemy teddy bears spawn. However, the game’s limited soundtrack is unremarkable, with a jack-in-the-box style rendition of “pop goes the weasel” as the game’s title music. 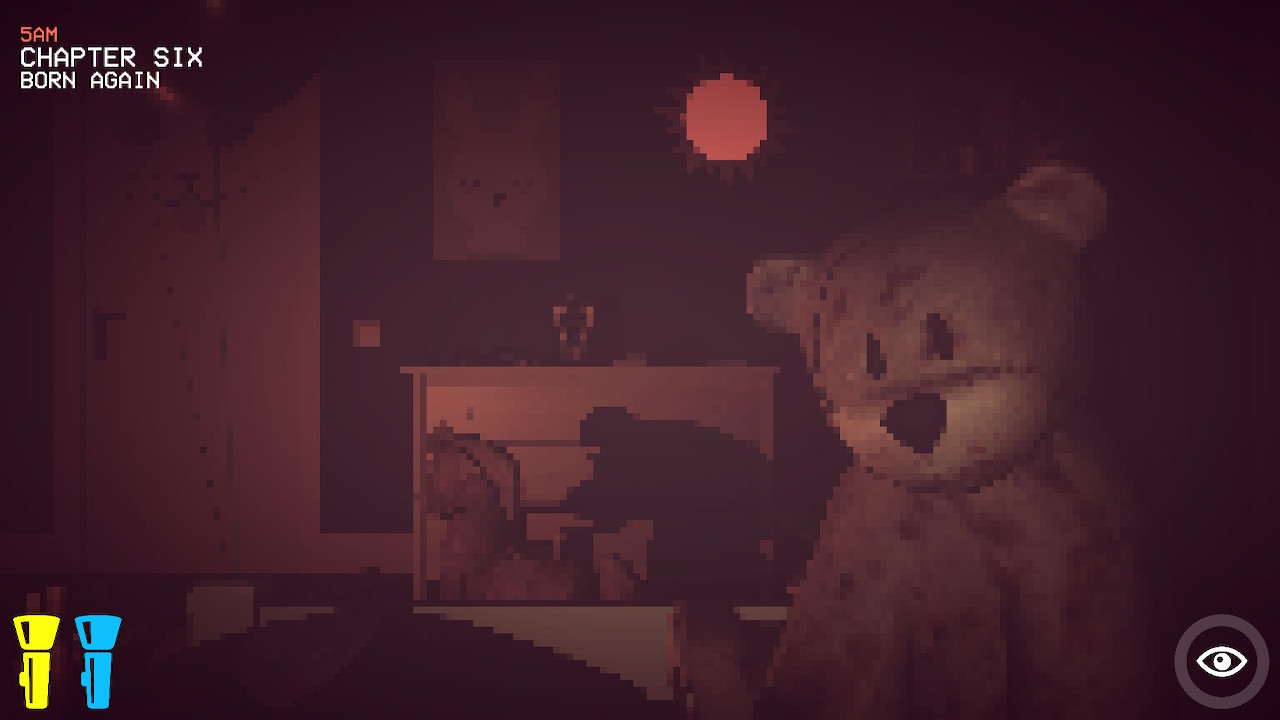 Bedtime Blues is a horror experience suitable for kids, which is a difficult feat and contributes to the success of the game. The game features no blood or gore but uses lighting, audio, and gameplay harmoniously together to create a scary environment. The story, like other aspects of the game, is spartan but successfully sets up the premise of the haunted teddy bear and provides closure to the player by the end of the night. Simple cut scenes at the beginning and the end of the story mode frame the narrative, as well as a small free-roam sequence before each level that has the player search for clues and hidden collectibles. The collectibles are never hard to find, and collecting them doesn’t lead to anything, but still adds welcome variety. Finally, in addition to the story mode, there is an endless mode where the player tries to last as long as possible without dying. In this mode, the player doesn’t need to frequently close their eyes, so the player has fewer things to balance than in the story mode. This makes endless mode slightly less tense and strategic.

Ultimately, Bedtime Blues succeeds in being a fun, creative, and tense game experience, by forcing the player to balance sleeping, charging the flashlight, and stopping the possessed teddy bear from attacking. This success is achieved in spite of its spartan menus, limited animations, and gameplay issues. This is especially impressive given the budget nature of its release and its one-man development team, as well as its ability to convey a tense environment without the use of blood or gore. If you like independent horror games and don’t mind a game without fancy layers of polish, then Bedtime Blues is an easy recommendation.

Bedtime Blues is a 2018 horror game developed by HannMade Studios and published by Forever Entertainment S.A. for the PC and the Nintendo Switch.