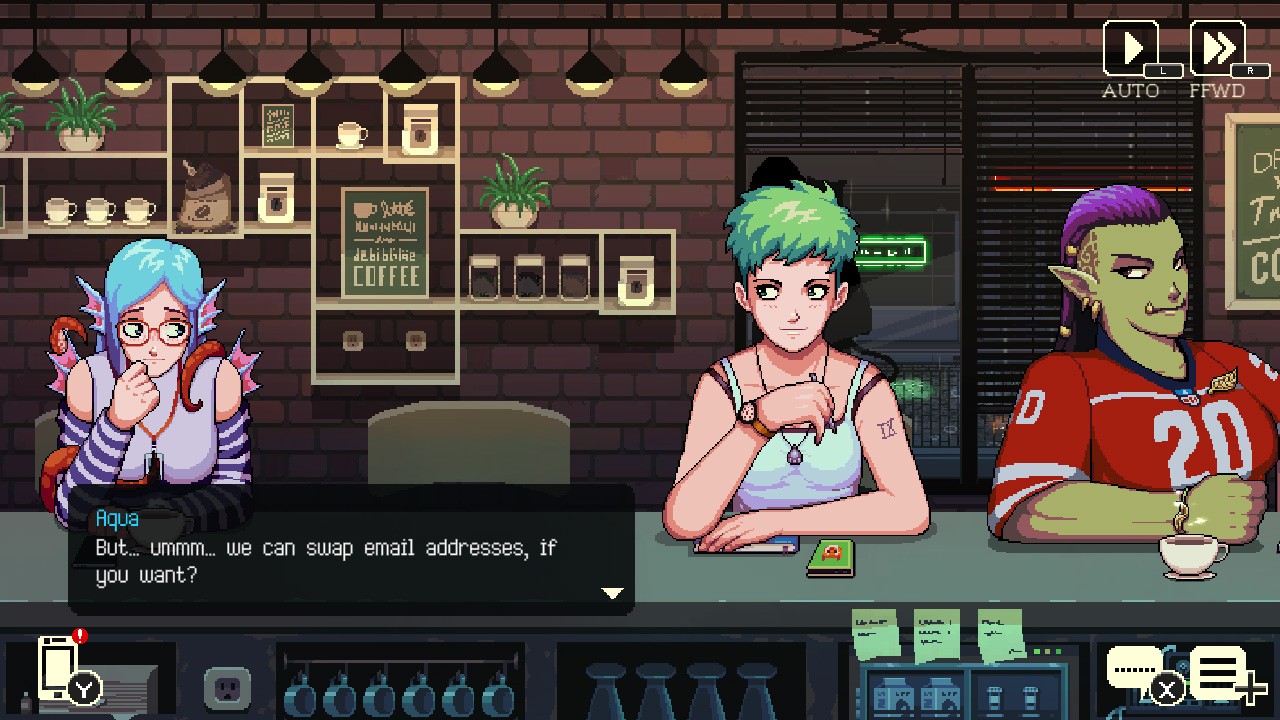 The rain falls outside, splashing its percussive rhythms on the pavement of Seattle. Night has fallen, which signals the time Coffee Talk opens its doors, a night-only coffee establishment run by a mysterious barista with a penchant for excellently made warm drinks.

Coffee Talk is a game about conversations, mixing drinks at the behest of patrons, and observing the subtle changes in its patrons lives over the passing of days. There are no moments of strident heroism, no expectations of grand adventure. This is a game about meeting strangers, serving drinks, and watching pedestrians pass in the street outside.

Most of the gameplay takes place out of the player’s hands. For every ten to fifteen seconds of drink mixing, there are tens of minutes of conversation. Patrons enter and leave the coffee shop at their leisure, often sharing with the barista their thoughts of the day, having conversations and disagreements with one another, and commenting on the events passing outside of the walls of the shop. Occasionally, customers will come in and ask for a drink, or order a new drink after a few minutes of chatting, but most of the game will just be reading the characters discussions among themselves, and the barista.

Where Coffee Talk excels is in its presentation. Coffee shops all have a familiar atmosphere, a kind of low-lit, quiet den full of gentle smells, quiet and occasionally sociable strangers, and unobtrusive music. This feeling is captured wonderfully in Coffee Talk, with a gentle lo-fi chiptune soundtrack that hums its chiming notes and comforting melodies. Combined with the seemingly ever-present drumming of the rain outside, the warm glow of the shop’s lighting, and the feeling of a reprieve from the outside world, the entire atmosphere is a place that almost begs to be revisited.

Drink mixing, for when it pops up, makes up a majority of the player choice. Patrons will ask for drinks, sometimes by name, sometimes by description, and occasionally they will insist on drinks that are probably a bad idea. It’s to the player’s discretion or creativity on how to fulfil the clients’ requests, and the ramifications of drink selection will play out as the days flow by. Drinks are made up of a base component, and then augmented with primary and secondary flavors. Mixing itself is fairly intuitive, and the player’s phone comes loaded with a small handful of drink recipes to give the player an idea of how to begin to explore other options. 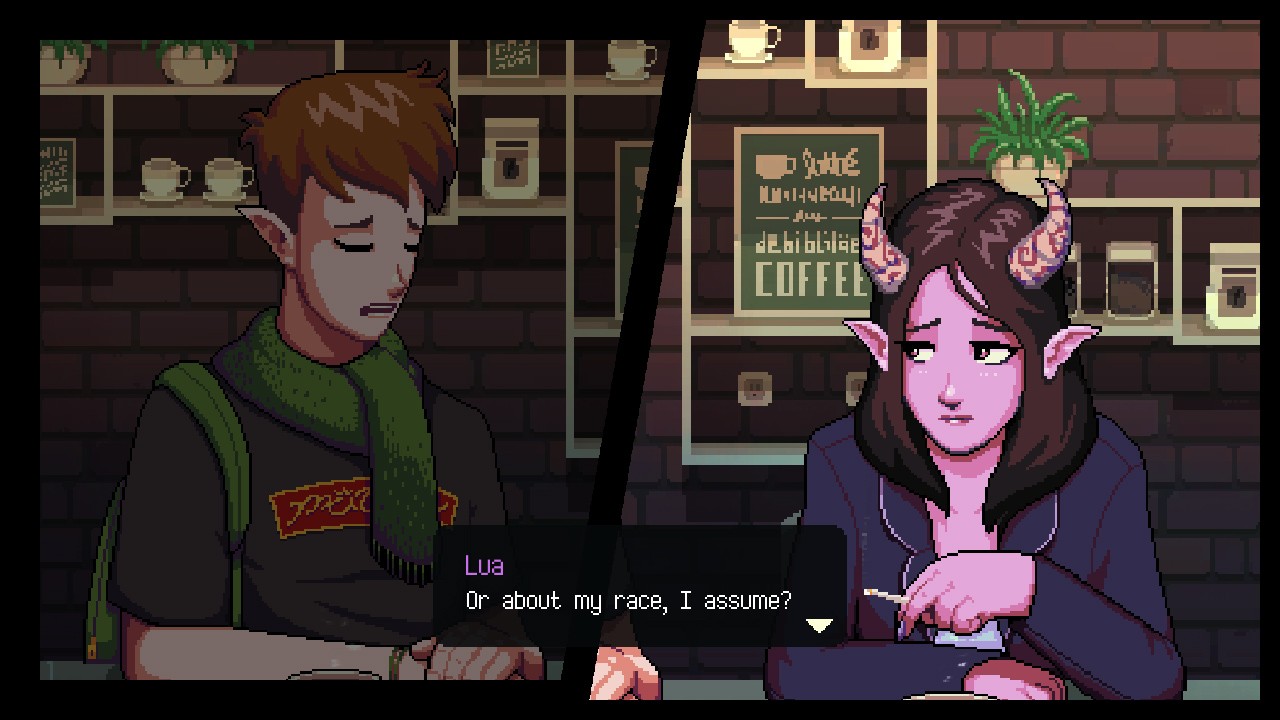 Beyond drink-making, the player will listen to the conversations of the patrons, and their avatar will occasionally chime in with observations. When the conversations get heated, or when there is a brief drink-making interlude, the game switches to a graphic style, pulling sections of the screen apart like comic panels. With the addition of slight camera pans and sound effects, even the simple act of reading can feel a little more dynamic. Even outside of more strident moments, the little pans of the camera across the counter to include or exclude patrons as they talk is charming, giving the game a strong sense of place. Combined with the visual and musical aesthetics, it’s easy to feel at-home with the patrons inside the walls of Coffee Talk.

Given how important dialog is for the feel of Coffee Talk, it’s also something of a shame that it is also one of the weakest parts. Coffee Talk hosts only a small handful of patrons during the two-week period the player experiences. The days float by in a handful of minutes each, and during that time, several patrons will drift into and out of the barista’s life. Although this is undoubtedly the life any barista will encounter, only getting small vignettes of their patrons lives, it still feels strange to take part in a story that is so transient, to see only a little slice of something that could obviously be bigger with a bit more patience, but never materialises. Coffee Talk will see a patron for a few minutes of sipping coffee, they’ll say their piece in a couple of paragraphs’ worth of information, then shuffle back off into the night. Everything feels immediate, and pleasantries shared makes up very little of the dialog. While that is normally encouraged—tight writing tends to excise any non-meaningful prose—it means that the key figures in the barista’s field of vision don’t have a sense of place. Their lives are probably more robust than the barista sees, but the player has no real chance to get to grips with that.

Instead, patrons are cardboard cutouts of themselves, distilled into their role for the story, and any other details are lost to efficiency. Everything that’s left is rich in driving the story,  but poor in the things that makes the characters feel round. Stereotypes work for quick explanations, but when the exposition exists to set up more story, one would hope to find mundane details and non-story details in there. Do any of these characters have pets? They have hobbies listed in their social media profiles, but it doesn’t show in their dialog. Do they drink? Are they vegan? Do they do Crossfit? What bands are they fans of? When was the last time any of them went to a theme park? What did they study in university?

The barista spends hours with these patrons, and probably couldn’t answer those questions. 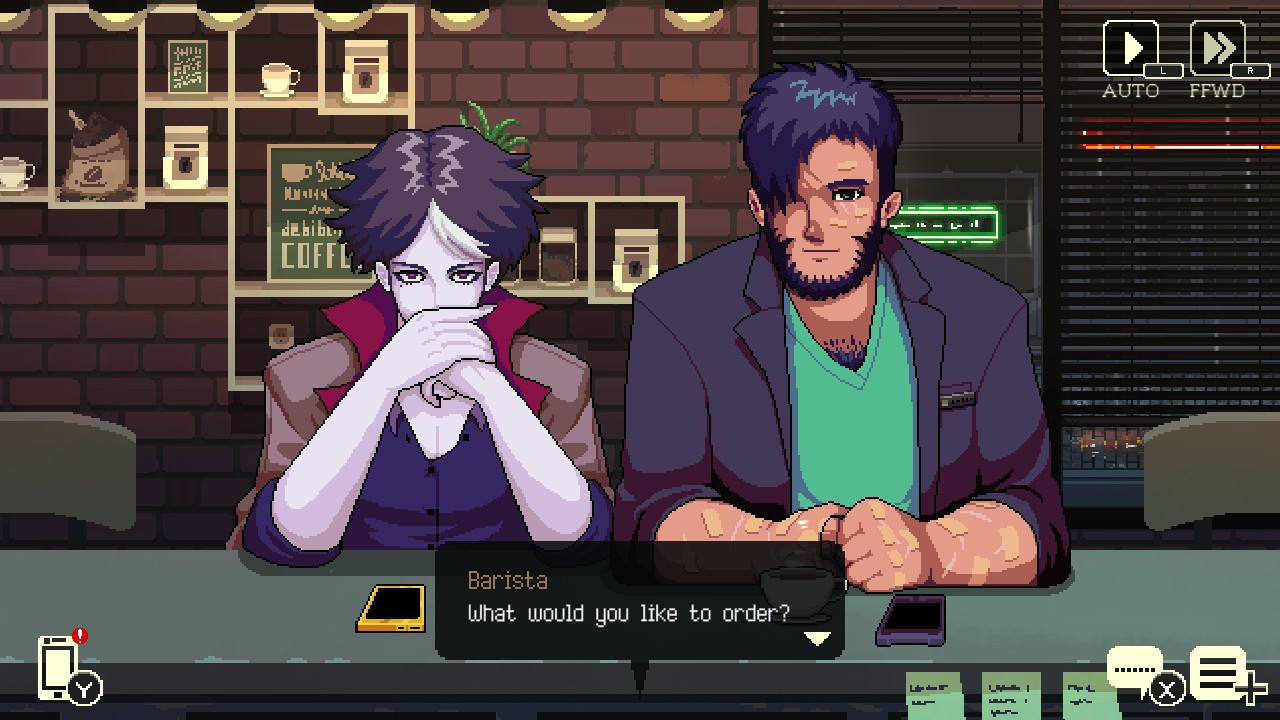 As a result, Coffee Talk feels a little flatter than it should. The aesthetic and art are exceptional, the little visual and audio flourishes to the dialog and drink-making are charming, the world outside of the walls of the coffee shop feels like it would be a wonderful place to visit. But those aren’t enough by themselves, not when the rest of the experience rests on the dialog, and the characters themselves just cannot deliver. Their sense of place, the very fiction on which the game has made its foundation, just isn’t strong enough.

As the game draws to a close, it feels like two ships passing in the night. If they had longer, or if they sailed slower, there would be the chance for something greater. A tragedy, a romance, a joyful reunion, a history… It’s not hard to imagine those stories, and even see hints of where they could be. But instead, the ships coast by, lost to each other as they carve their way through the ocean.

Coffee Talk gets so close to being everything it needs to be, and there are hints of it mixed in with the frothy mugs and flower-petaled latte art, but it never quite makes it all the way.