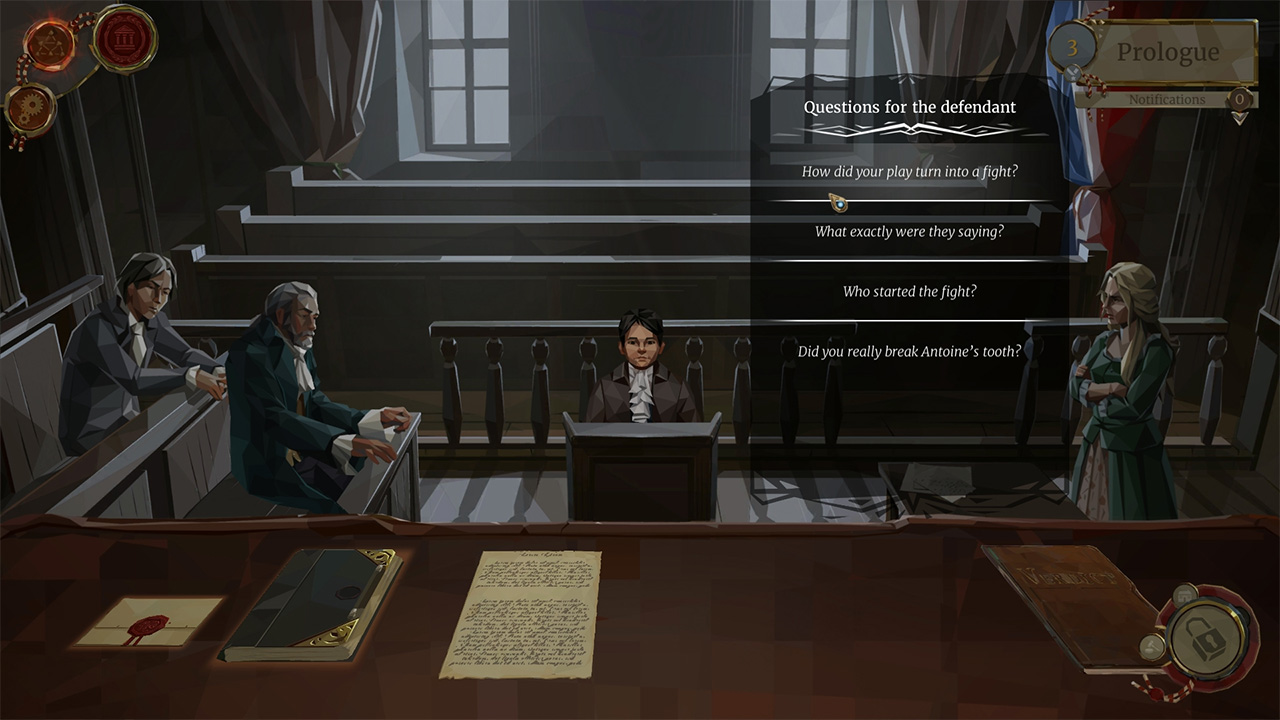 Remember the game Papers, Please? You took on the role of an immigration officer at the border of fictional dystopian country, Arstotzka, taking moral decisions on the future of citizens wanting to cross. Released in August 2013, the indie game became a huge critical and commercial success. Six years on, and We. The Revolution is the latest attempt to take aim at the ethical dilemma branch of simulation games, but it fails to hit its blood-soaked target.

It took a while to figure out what the story was, but here’s the crux of it. Set in the French Revolution, you play as a Judge of The Revolutionary Tribunal, overseeing cases in your courtroom – reviewing evidence, looking over case files, and interrogating suspects – and deciding whether the defendant should be freed, jailed, or face the death penalty. But this decision isn’t necessarily always clean cut. The people brought to you are from different factions across the city – revolutionaries, the ousted monarchy, ordinary citizens and criminals – and you need to balance their wants and desires to prevent all-out war.

The first task in each interrogation is to review the evidence, which you then need to sort into specific, opaque categories. Each one you match correctly opens up a line of questioning. Straightforward, yes, and actually it’s usually easy to tell which piece of evidence goes where. However the ‘correct’ answer doesn’t always match up with what the logical one should be, a real source of frustration as it snatches away any chance of a successful trial. The jury gives you its verdict and you can choose to follow it or not. Your decision will impact your relationship with each faction, as well as your respectability as a judge. 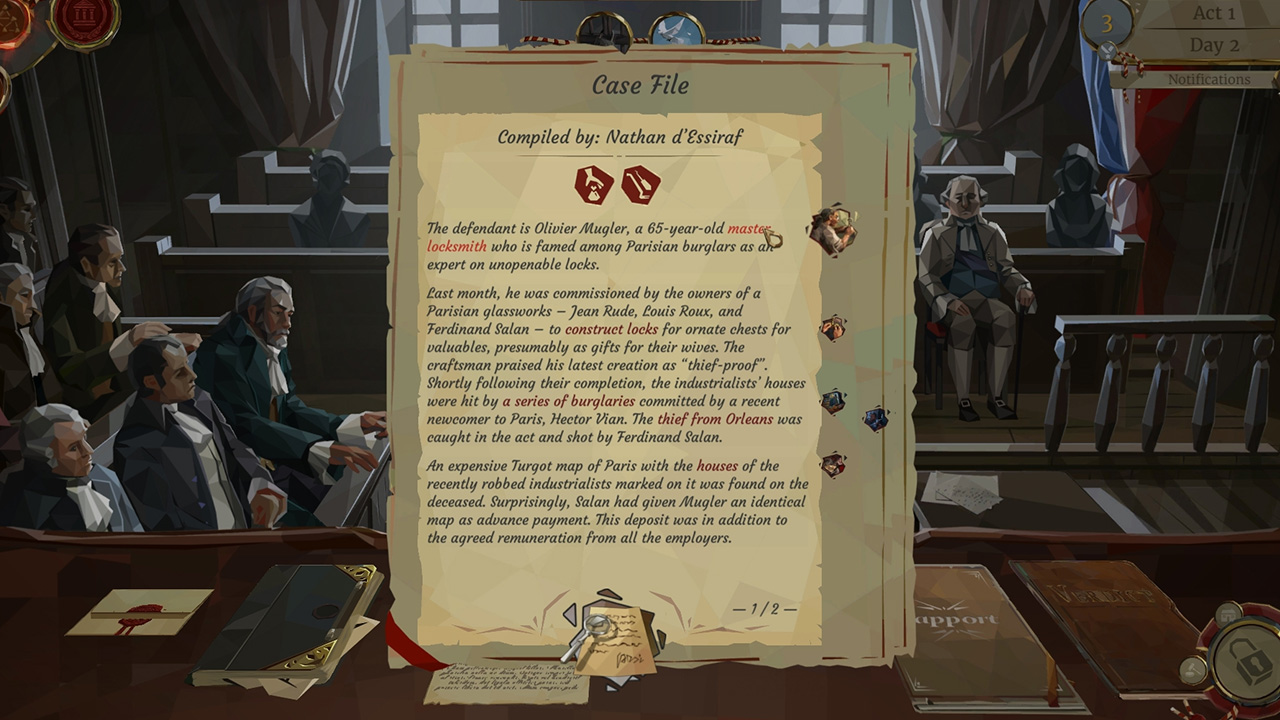 This courtroom experience gradually gets more difficult as you move on to new cases. Each time, you’re barraged with new characters and plotlines which you’re expected to remember despite being given minimal information about them and their significance, it becomes impossible to keep track. But this isn’t all you’re required to do though as a variety of gameplay mechanics are added in, coming together in to a jumbled mess.

There’s a range of in-game choices you can make too. Instead of weaving them into intricate cutscenes and putting them at the heart of the game, a note pops up randomly on your screen with a binary A or B choice, each differently impacting your relationships with each faction. It seems out of place and like it’s been added in at the last minute. The developers say that these events, randomly generated each time, help make no playthrough the same, but it appears they make little difference to the final outcome.

Different areas of the city are added in later on, each controlled by different factions. Your goal is now also to take over each area by completing tasks to gain influence, and taking down rivals to prevent rebellion. This is where the game lost me. There was just too much going on. I had just got my head around how the game works when a huge new section is added, with little in the way of guidance.

As I’ve mentioned, the whole point of the game is to balance the happiness of each group, with all the choices above influencing that. It’s an interesting idea, one which admittedly is frequently used in other games, and it would work so much better if the characters were easy to empathise with. Papers, Please, for example, made you feel for the characters you were impacting, putting them at front and centre of the game – that was what made the game a success. Here the focus is a lot more on your character and, as you know the impact your choice will make before you make it, it’s easy to just follow the best course of action for you, ignoring the effects on the defendant.

And this makes the idea of replaying the game obsolete. Yes, you could make different decisions on a second playthrough, but ultimately that’s going to have little impact on the ending. There’s nothing wrong with linear games, but with a game like this there needs to be more branching so it feels like your actions have consequences.

Even though the gameplay’s sub-par, there’s no hiding how beautiful the finished product is to look at. The comic book style artwork really stands out, filled with geometric shapes and authentic rich colours, it’s a treat to the eye. Cut-scenes stand out as points of excellence in this regard, pushing together different stills to tell the story with emotion to a booming first-person narration. 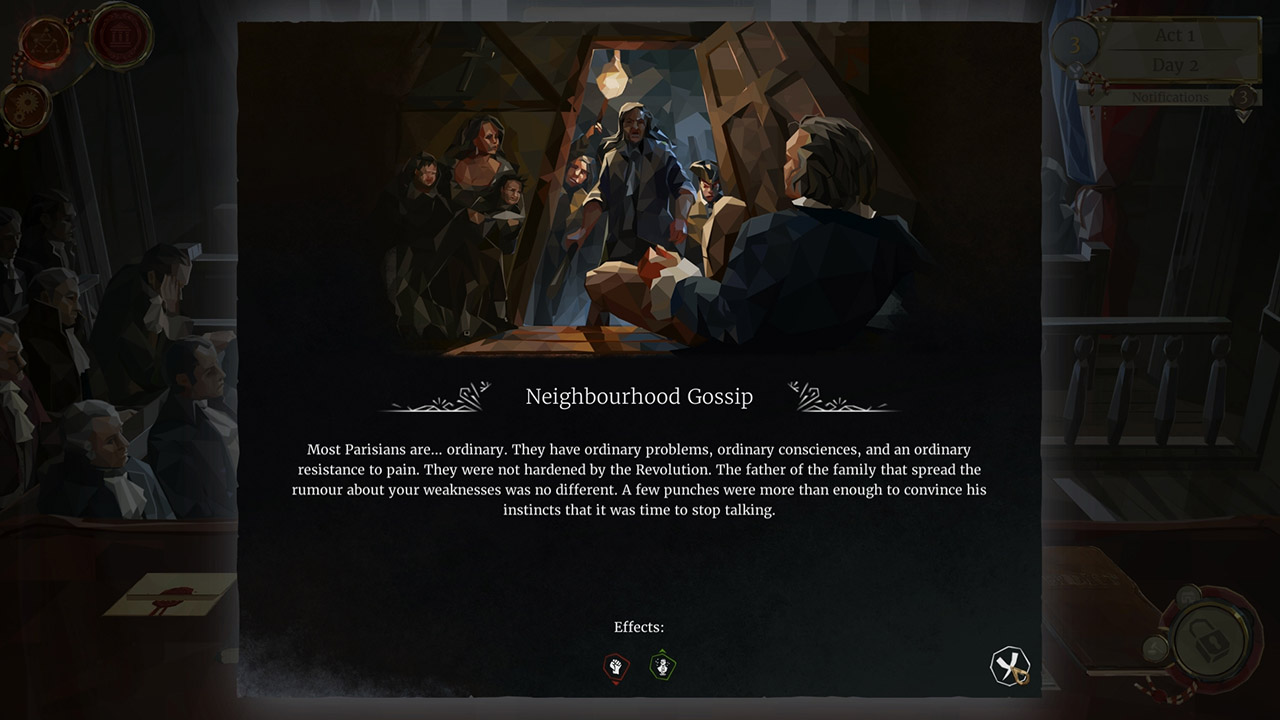 But away from these snapshots it’s irritatingly quiet. For a city in the midst of a revolution, there’s no anger, no passion from people in the public gallery as you influence their future. A few small sound effects here and there aren’t enough to sustain an atmosphere that engages you properly with their world. The characters speech, written on screen, is full of vitriol, annoyance and resentment, but it seems out of place when you could hear a pin drop. If the text says the gallery are angry then I want to hear shouting.

And it’s here in the courtroom where you can tell the game was made for PC. A mouse is desperately needed to help you flick through documents and navigate different windows. Manageable yes, but clunky.

The vision here of a game which poses the player real ethical dilemmas, making them think hard before they make decisions, is an exciting one. But to do that, you really need to feel the weight of your choices. Add to that a clustered mix of gameplay mechanics and you get something that could’ve been so much better.

We. The Revolution Review

Tries to force in artificial moral choices, but ultimately fails to create any real emotional connection.