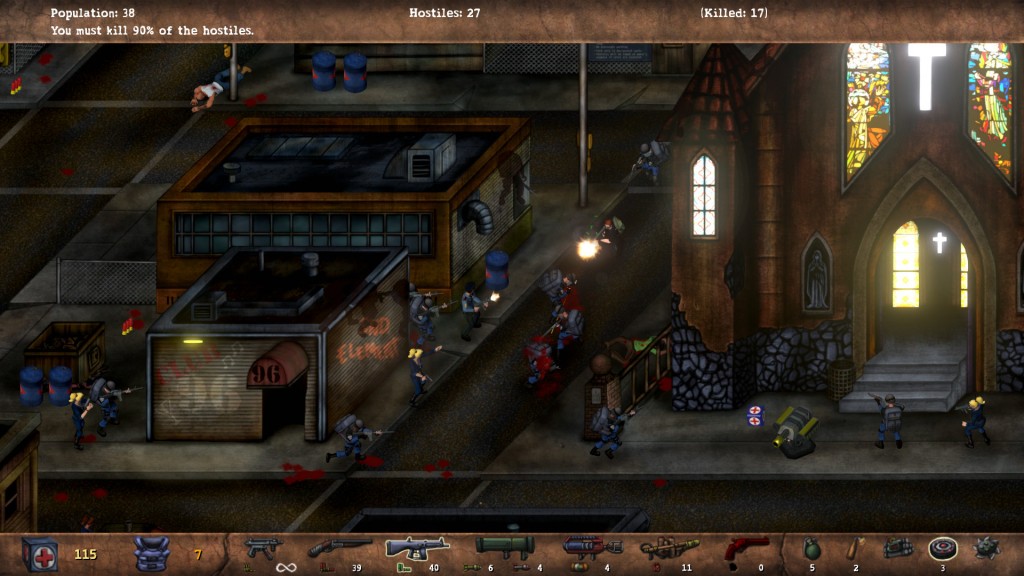 The postal series has always remained a popular and controversial collection of games since its conception in 1997. It was introduced as an isometric twin stick shooter with hand-drawn pre-rendered backgrounds before evolving into a 3D first person shooter with the sequel, Postal 2. For many gamers, myself included, the second instalment was our first experience of the franchise and after the long-awaited and critically underwhelming Postal 3, fans were left a little disappointed. However, with this HD remaster of the original game, Running With Scissors are trying to appease old fans and persuade new gamers to come and discover the roots of the franchise.

Postal has a pretty simple plot wherein a random dude (the POSTAL DUDE, no less) just exits his home one day and decides to kill everything; civilians, police, SWAT, military, ostriches – no one is safe with this maniac running around. The idea is to kill 90% of the hostiles in one area before moving on to the next. By “hostile”, I mean innocent members of the security forces just trying to do their job. Yeah, this caused quite a stir back in the day but looking at it now, it’s quite tame compared to some other ultraviolent games. 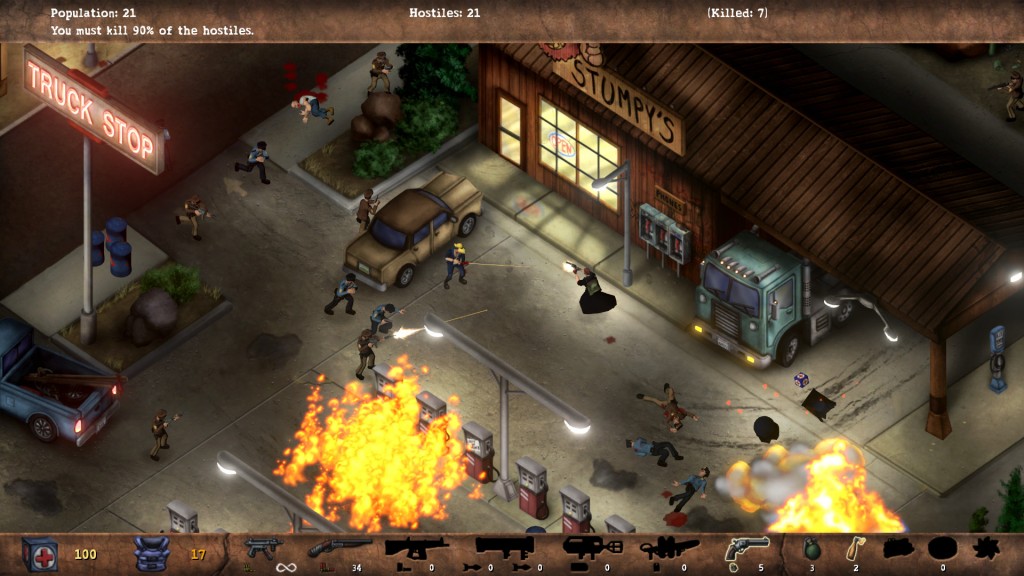 This is a pretty faithful remaster (or “REDUX”), if truth be told. The glaring issues of the original game are still here, and no amount of pixel upgrades can hide that. To be fair, the control scheme has been overhauled to be more playable by today’s standards, and the lighting effects on the headlights of cars show that some effort was made to modernise the games visuals. Other than that, were plagued with awfully flat looking environments that, while technically traversable in a 3D context, are just lacking depth. The 3D characters stand out comically from the hand drawn backgrounds and it’s really hard to tell whether your character is about to walk past, up against, over or behind different obstacles.

The shooting mechanics are satisfying when they’re at their best and downright pants at their worst. You start off with a sub machine gun with unlimited ammo before picking up a shotgun, and then later your given more badass weapons like flame throwers and rocket launchers. The majority of the time, the shooting is ok; you blast, you take cover, you blast some more til you see brain matter. Idiot proof stuff really, but what really pissed me off were the NPCs that ran behind obstacles like houses and cars. When this happens, they’re highlighted in grey. Yup, I just said HIGHLIGHTED and GREY in the same sentence. Right, I understand that the game has a dark and gritty tone to maintain, but tracing enemy fire is pretty tough when it’s emanating from a smoky grey silhouette hiding behind a bus shelter in the corner of the map. Jeez. They can also shoot you without even appearing on the screen yet, which is so awesome. I love it. 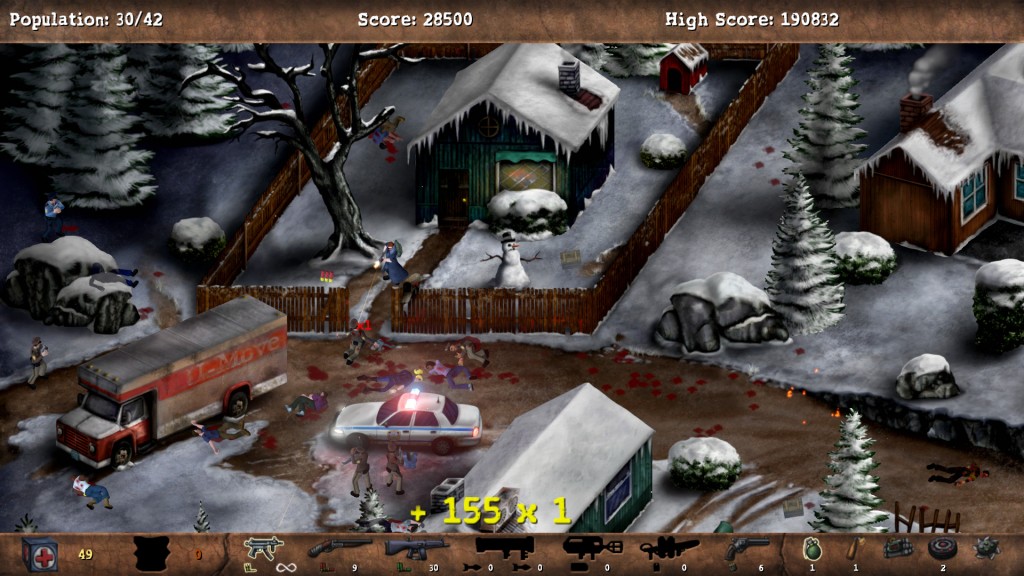 You can use a host of secondary weapons to slaughter the innocent as well, but you won’t make a habit of it because they’re totally useless. The landmines are OK I suppose, but grenades and molotovs? Pure crap. Of course it doesn’t help that the Postal Dude throws like a total sissy and takes about two seconds of animation to actually do it. This kills the otherwise fast paced gameplay, so if you were thinking of rapidly popping out of cover and chucking a grenade, forget about it. He shows as much gumption throwing explosives as I do throwing an empty beer bottle down a piss drenched alley.

Unfortunately, I can only see Postal REDUX appealing to nostalgic fans of the original. There are tonnes of shooters out now that absolutely wipe the floor with this decrepit relic. Dam, it wasn’t even that good 19 years ago, so why should we be exposed to this tripe in 2016? In its defence, it has an addictive quality when the gameplay is flowing, but for every sparse moment of enjoyment I find there’s always a face plant waiting just around the corner. Be it in the form of disorienting shifts to top down views, failing to throw a grenade over a bush and blowing myself up, the ridiculous hit and miss explosive splash damage, take your feckin’ pick.

Postal REDUX is a mediocre game from 1997 with a fresh lick of paint. Now in 2016, without the controversy to shift units, Postal is just pointless.