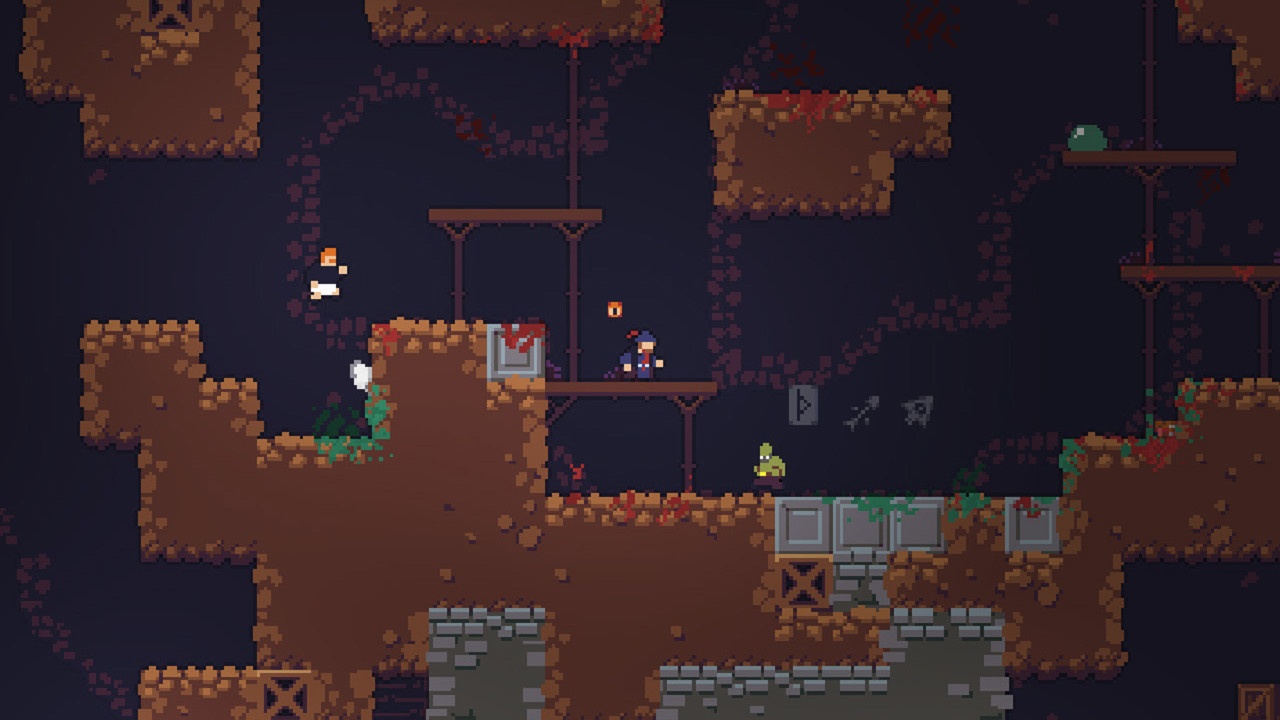 A good roguelite game has a story and asks absolutely nothing of the player to remember it. Face it: there is a plot, because if there wasn’t we’d still be doing Commodore and Atari games where we simply checked the manual to find out the deep lore for why a blue square is attacking a black square. However, we look to RPGs, Visual Novels and even the occasional open world adventure game for the actual, detailed history of something. Roguelites lean on their gameplay and the allure of random chance to keep players coming back time after time. It’s a bit like gambling, but without awful YouTube personalities trying to get kids hooked in order to avoid having real jobs. The folks at Yogscast clearly saw some amazing streaming and gameplay potential with Caveblazers in order to publish it, and Rupeck Games delivered in a big way.

The story is this: there’s treasure, or power, or magic, or some goddamn good reason for you to enter this massive cave. The crazy old man who sleeps outside the entrance (because the housing market, am I right?) tells you straight up that no one has ever come out alive. Undaunted, you decide to head in, and, unsurprisingly, you’ll be dead in a few minutes. But you keep regenerating back at the entrance. You keep getting exploded or shot full of arrows or succumb to poison damage or (my personal favorite) annihilated by projectiles shot from a giant worm, and then wake up, back at the start, ready to dive again. This is a spelunking adventure roguelike, with co-op options, a massive number of unlocks, and some well-chosen pixel graphics that lead to one thing and one thing only: complete satisfaction.

As you enter into the cave, you get quickly briefed on what you can do. You’ve got a melee weapon and a ranged weapon, and you have an unlimited number of arrows so don’t worry about it. You’ll find potions along the way to drink, new equipment in the form of swords, clubs, tridents and others, along with some rings and necklaces that are differently enchanted and all entice you to mix and match your fashion. There’s food to heal you up, altars to sacrifice health or gold for additional items, and everything else under the sun. If you’ve played Diablo, you might have a general idea of what you’re in store for. People have also stated that it’s similar to Spelunky, but I’ve never played that game so I can’t really speak for it. Point is, you’re in this cavern, and you’ve got two levels between you and the first boss (which is randomly chosen) to get up to speed before things get things a bit hectic. 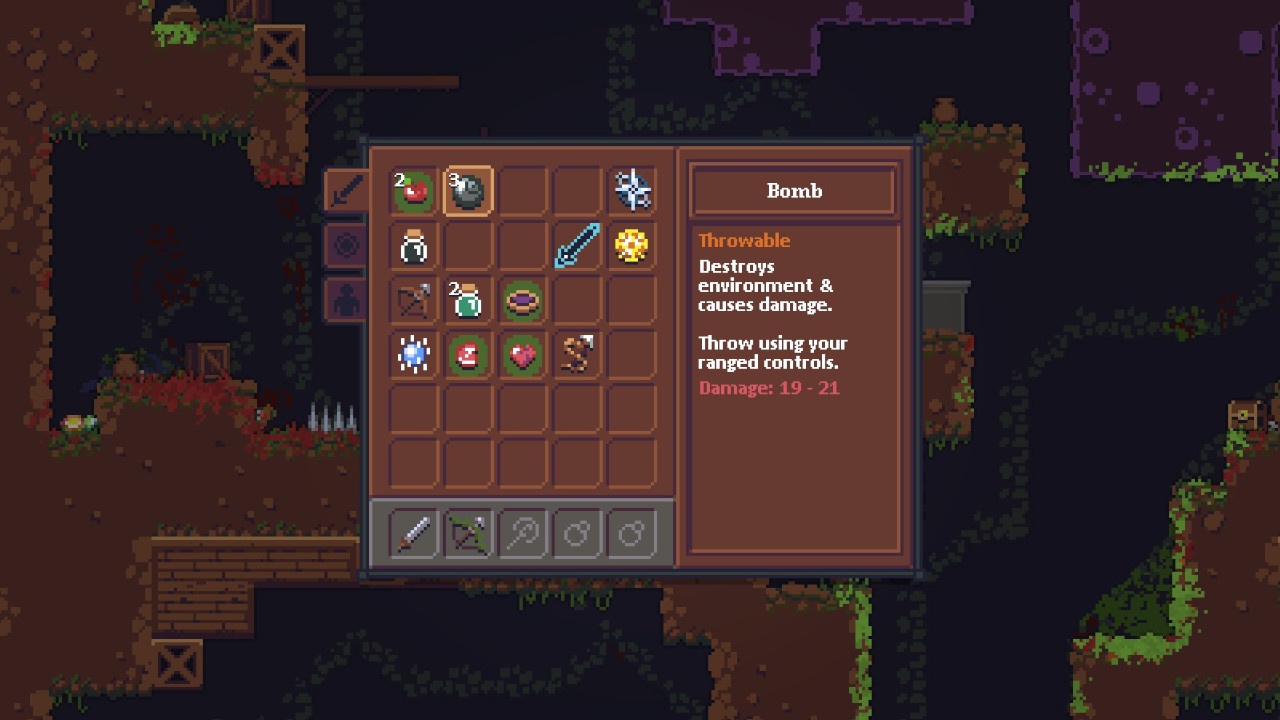 Now, this is a true roguelite, complete with daily runs, customizable entrances and some seriously diverse unlocks. As you dive into the game, you’ll be slaying a wide variety of monsters, finding tons of jewels in treasure chests, and learning the hard way about where to step and how to move to stay alive. The further along you play, the more you unlock back at the main entrance. One of the first things you’ll see are perks, which are single selection bonuses that affect your run going in. These little boosts are pretty minor (improved arrow damage, extra bombs to start with), but they can make a world of difference in the first few seconds when the game gets going. You’ll also unlock more clothing to customize your character’s look, an achievement board to see how much you’ve learned and how far you’ve gotten, and a special crystal that can keep other characters from following you between floors. More on that in a second. There’s also this arena where you can just fight wave after wave of enemies if you’re seriously that masochistic, and I didn’t enjoy it simply because I was already getting my behind kicked in the main story.

There is no mercy as to how hard and fast the enemies come at you in Caveblazers. As soon as you start moving, they know you’re there, and they want to find you, tooth and nail. If you’re truly lucky, you’ll find the “blessings” that are scattered throughout the dungeon, which are additional passive perks that are randomly selected to be all over the place. Some are super helpful, like healing you for damaging enemies or reducing spike and lava damage. Some are kind of not so great, like damaging an enemy when they hit you. Great, okay, but he’s still hitting me. There’s a massive number of these things, and there’ll be instances when you gotta choose one of three. Don’t be a fool: if you don’t rely on magical equipment or spells, don’t get the thing that boosts your elemental damage. Or do, if you’re super cocky about what you’ll find next. 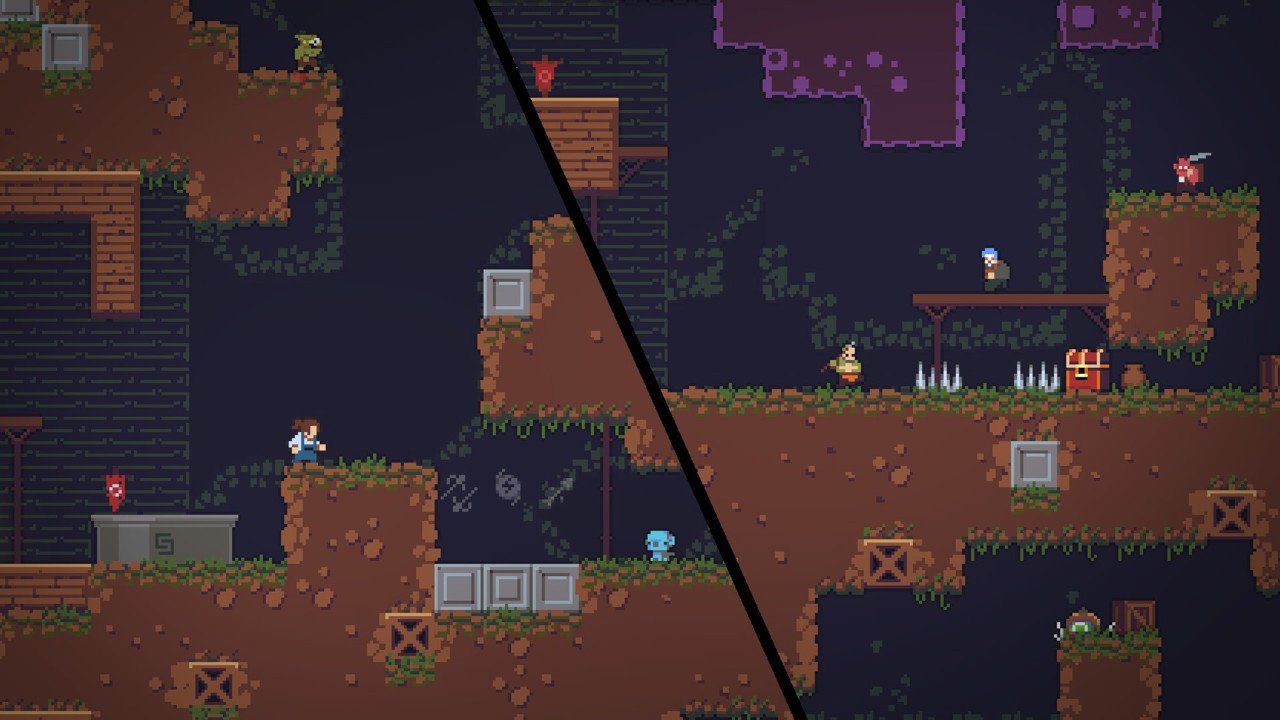 Caveblazers is a damn fine time as a co-op roguelite as well, because having an extra body to pull focus and help you work on the simply massive bosses really makes a difference. The split screen approach worked well with the Switch docked, but was a bit too crowded in handheld mode, so make sure you’re home and comfortable before you start screaming at your friend to take care of the Jumper before it explodes you both. If you’re a loner but still want someone else to do the hard work for you, don’t worry: there are plenty of other NPC explorers about, and they’ll even follow you between floors to assist you as you move along (unless you toggle the aforementioned crystal). NPC helpers are the bread-and-butter of this game, meaning that they can turn the tide when you’re deeper than you’ve ever been before and holy crap the flying skulls are aggressive. They won’t always be there, though, and they die at the worst possible times, so don’t plan on them being the sole savior to your quest.

I must have put in eight back-to-back runs before I even realized how much time I had sunk into Caveblazers, and I think that speaks a lot for it. The pixels are dirty in design but it really works well for the game and the atmosphere. The music is sufficiently adventurous and funky without being particularly memorable, though I did enjoy it quite a bit. I’m compelled to try and get as far as I can without scaling the game back too much, though I admittedly did a custom run where everything was easy and I was fast and they were weak. It showed me what there could be for me ahead, if I got better at the game. Thankfully, customized runs don’t unlock anything or count, so it’s like a quick Game Genie boost without needing your parents to log into AOL to find codes because I lost the manual over a year ago. The only real issue I had was a technical one that will hopefully be patched soon. Pausing the game resulted in a few seconds of freezing after you unleashed, meaning the game just stopped doing anything while the music continued playing. It didn’t affect the run, and it’s not like the enemies got the jump on me during this, but it was still a bit of a bother, so I hope that can get patched.

Seriously, if you’re looking for a great, replayable adventure with a ton of things to find, bosses to beat and items to find, Caveblazers is one of the better roguelites that I’ve picked up, and the best one so far this year. If you have a friend, all the better, but don’t worry about going at it solo. Worry about if you’ll find a good bow before you get to the massive, floating demon eye that turns into an even bigger demon eye after you beat the first stage. Oh, and about finding enough time to play.

Caveblazers: because bombs are a weapon, a digging tool and a hilarious prank on your friend who’s just trying to help.