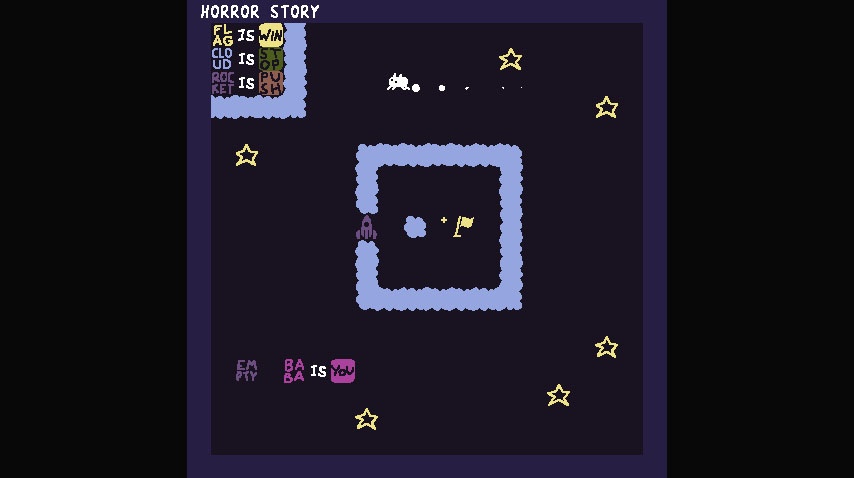 Who is Baba? Constructed simply out up of a few white pixels, I’ve decided that he or she is most likely a sheep; although I’m not ruling out a dog or rabbit. What I do know is that they’re the star of Baba is You, an award-winning indie game where you can manipulate the logic rules that control the objects and environment of each level. I also know that it’s pretty damn great.

The core gameplay is actually fairly basic, although obviously gets more complex the further you progress. Each level is a single black screen with a number of objects and, crucially, a few blocks of text which make up the level rules. Baba can move in four directions and rearrange individual words by pushing them around. For example, most levels will have at least ‘BABA IS YOU’ and ‘FLAG IS WIN’ as conditional rules (although even those will occasionally be different) along with other phrases such as ‘ROCK IS PUSH’ or ‘LAVA IS HOT’. Your goal then is usually to get Baba to the flag by altering these statements. In early levels this might be easy as creating a ‘WALL IS PUSH’ statement so you can push a wall out of the way to reach the flag, or maybe even changing the win statement to ‘ROCK IS WIN’ so you only have to touch a rock to complete the level.

Sounds easy? That’s what I thought – for the first few levels at least. I loved the premise and the possibilities it brought, but I completed the first few levels in minutes and was worried it wouldn’t realise its potential. Quickly though things start to get more challenging, with new concepts regularly being introduced and previous tactics being deliberately nullified in order to force you towards creative new solutions. It’s a wonderful example of game design, and really fosters a sense of ‘just one more go’. 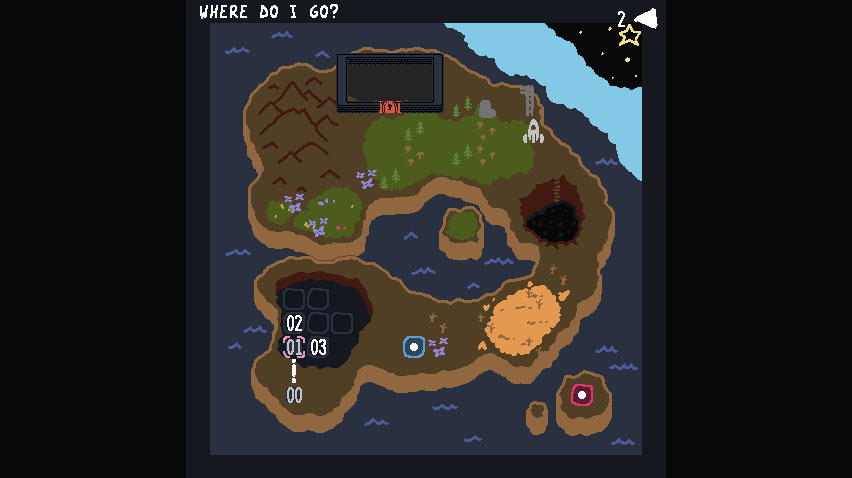 Even with the increasing complexity and fiendish level design, the later levels are still small enough to fit on a single screen but continue to surprise and demand new approaches. You’ll likely spend longer and longer puzzling over how best to progress with each new challenge, and experimenting with different options. And the key aspect here is that you are actively encouraged to experiment – you can restart a level instantly at any time at the touch of a button with no penalties or loading times. Alternatively, you can undo your actions step by step so you have never have to worry about accidentally destroying yourself or getting into an unwinnable position.

Baba is You also does its best to avoid frustration by always offering you a choice of levels, and even unlocking the next world before all the current levels have been completed (although I still felt compelled to 100% each world where possible). This means that you’ll rarely get completely stuck, as even when you’re bamboozled by one level there are others you can try out until inspiration strikes. That’s not to say you won’t occasionally get frustrated, and that’s the joy of Baba is You. One minute you feel like a genius after solving a particularly complex quandary, before being brought crashing down to feeling like an idiot with a frustratingly simple, yet seemingly impossible puzzle, before once again feeling the elation and smug satisfaction of victory – everything you want from a puzzle game.

If you’re looking for negatives then, admittedly, Baba is You may look and sound only marginally better than a spectrum game, but those simple visuals feel perfect for the gameplay. It’s cute but plain, which is actually quite important, so you can instantly pick out all objects and words on the screen. The music also seemed to be uninspiring at first, but the muted synth soundtrack grew on me considerably while I played. The only other possible thing I can nitpick about is the lack of replayability, as there isn’t really any need to ever replay a level. Sure some levels might have multiple ways to complete them, but on the whole there usually just seems to be one specific solution to unlock. However, with over 200 levels to complete that isn’t likely to be a problem for some time – I’m still less than halfway through and enjoying it as much as ever. 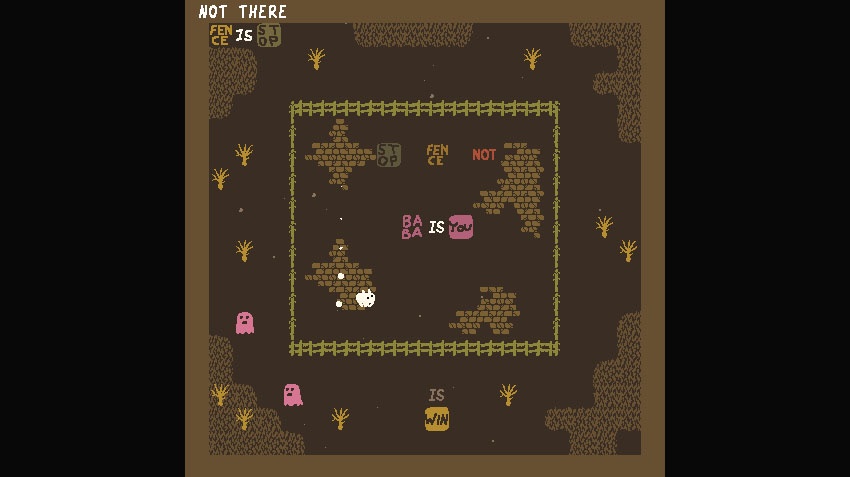 Baba is You began life in 2017, designed by developer Arvi ‘Hempuli’ Teikari for the Nordic game jam – an event it ended up winning. It then went on to win or reach the finals in several other events, and it’s clearly been polished and perfected considerably in those two years. All the little things combine to make you appreciate everything that’s gone into ensuring you enjoy the game and aren’t frustrated by other factors. As well as the undo and quick restart options you can bring up the menu for a summary of all the rules for the current level and can even add a grid overlay or disable the ‘wobble’ graphical effects.

The Switch feels like a great fit for Baba is You, perfect for quick sessions of puzzle-solving before being placed aside when you reach a mental dead-end, until inspiration strikes and you can dive back in. It’s extremely clever and ingenious throughout, and I genuinely feel it’s a must-have if you’re even remotely into puzzle games – if you own a Switch (or even just a PC) you owe it to yourself to give it a go.

Baba Is You Review

It’s extremely clever and ingenious throughout, and I genuinely feel it’s a must-have if you’re even remotely into puzzle games – if you own a Switch (or even just a PC) you owe it to yourself to give it a go.