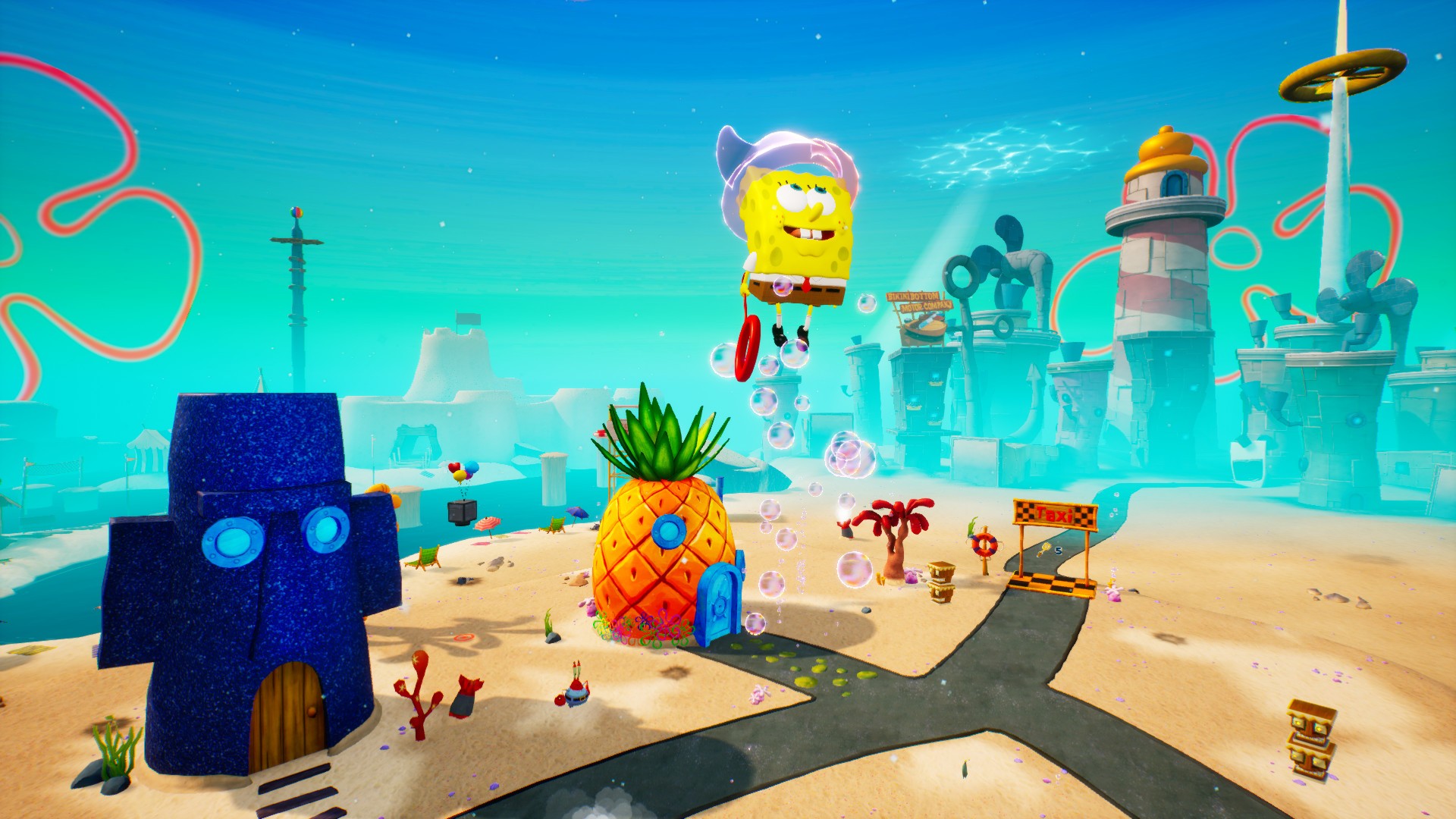 SpongeBob SquarePants: Battle for Bikini Bottom – Rehydrated is a remake of the classic SpongeBob game that came out in 2003 and garnered a cult following. It was published by THQ Nordic and released on June 23, 2020. Some critics had controversial opinions about the game and thought it didn’t do enough things differently and/or felt too punishing, but in contrary a lot of fans of the previous game and gamers that were experiencing it for the 1st time praised it. I definitely stand with the latter.

As soon as you start up the game, you’re treated with the series’ classic intro. This was a huge throwback for me as I hadn’t watched the series in years. In the start menu, you can select between the singleplayer campaign (which is mostly what I’ll be talking about) and the multiplayer component. At the start of the campaign, the main premise of the story is introduced, Plankton has made advances in his plan of stealing the Krabby Patty formula by creating these robots that are meant to steal it. Unsurprisingly, they turn against him and start causing chaos in Bikini Bottom. Plankton recruits Spongebob to save the day.

Graphically this game looks like it’s ripped straight out of an episode from the cartoon. In comparison to the original, it’s a really drastic change that you can notice immediately as the graphics and artstyle look way more colorful. If you like how the show looks, you’ll love this game’s look. 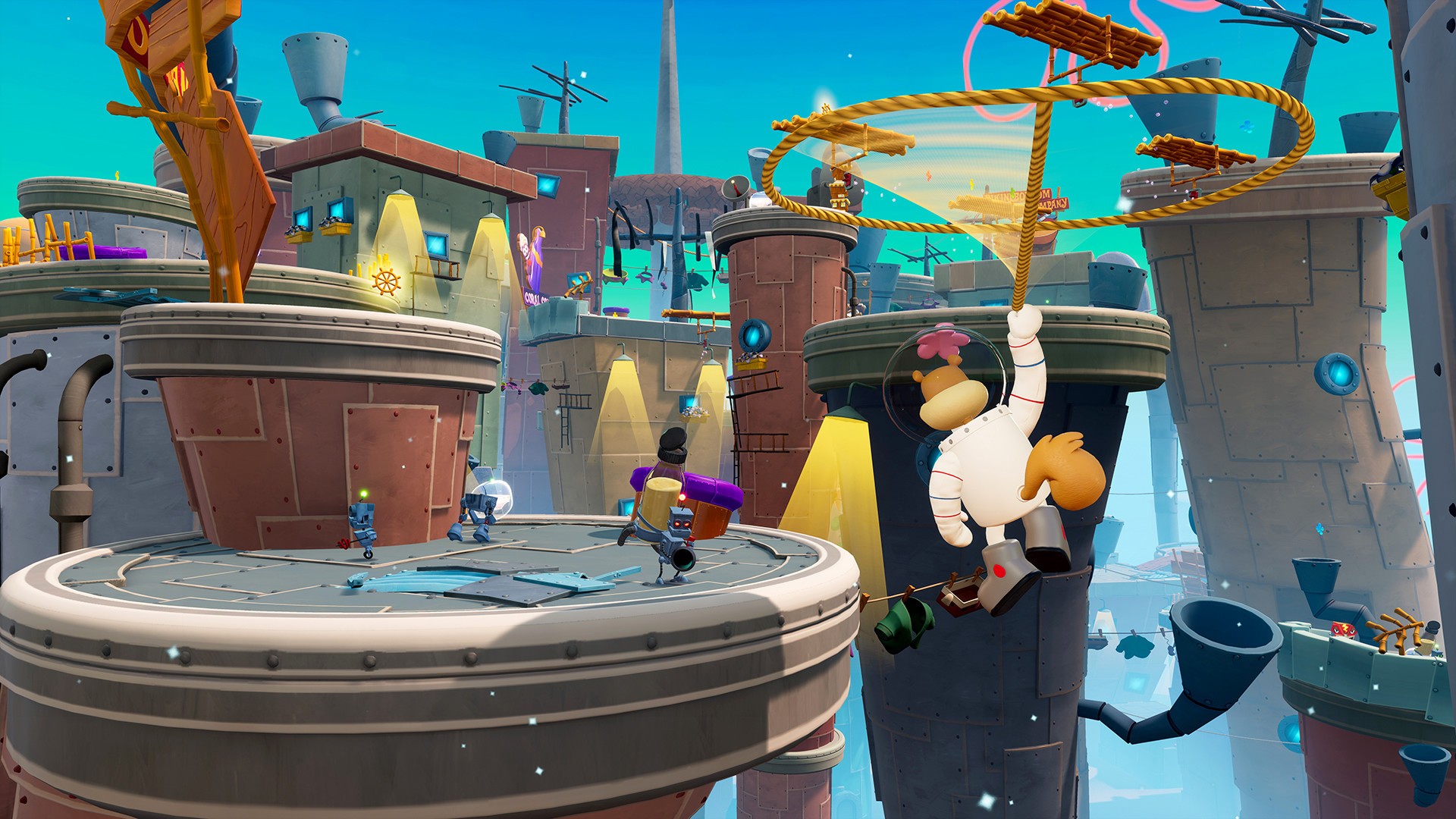 As for the gameplay, this game is a Collectathon with similar mechanics to the original but somewhat improved and streamlined. The 3 main characters that you play as are Spongebob, Patrick and Sandy. The main campaign features tight platforming especially with Sandy which makes jumps a lot more satisfying but also throws in some basic combat. Characters have their own unique attacks but most of them fall into 3 categories: A basic attack, an upwards/downwards slam or kick, and a special ability each character has. For example, Patrick can throw objects and Sandy can use her lasso to move around larger gaps or lasso enemies. There are also some other abilities you unlock later on for Spongebob which basically let you shoot bubbles. These are also used for the puzzle sections of this game, which contrary to what game journalists have said, are actually really simple and fun to solve.

Your main goal though, in the game is to collect as many ‘Shiny Objects’ and ‘Golden Spatulas’ as possible, with the edition of any other extra items required by characters you meet along the way. Speaking of these characters, in this game you’ll find a lot of your favorite Spongebob characters like Barnacle Boy, Mermaid Man, Larry the Lobster and of course your loyal companion, Gary. You talk with a lot of these characters during your journey and they give you special tasks you need to complete to get a reward (usually a golden spatula).

Similar to the original game, there’s also a couple of boss fights in this game, which are quite easy to beat. As for the package in general, the campaign is obviously the main attraction here but there’s also a multiplayer mode that lets you play with your friends. One of the things that’s notable about this is that the game features a ‘horde mode’ in multiplayer and can also be played through Steam Remote Play Together (game streaming). Although this makes the game really accessible to people that want to play together, one of the decisions they made for multiplayer didn’t sit right with me. Some of the original game’s cut content was included in this game but only in multiplayer, and on top of that this content is only worth about 45 minutes of gameplay. 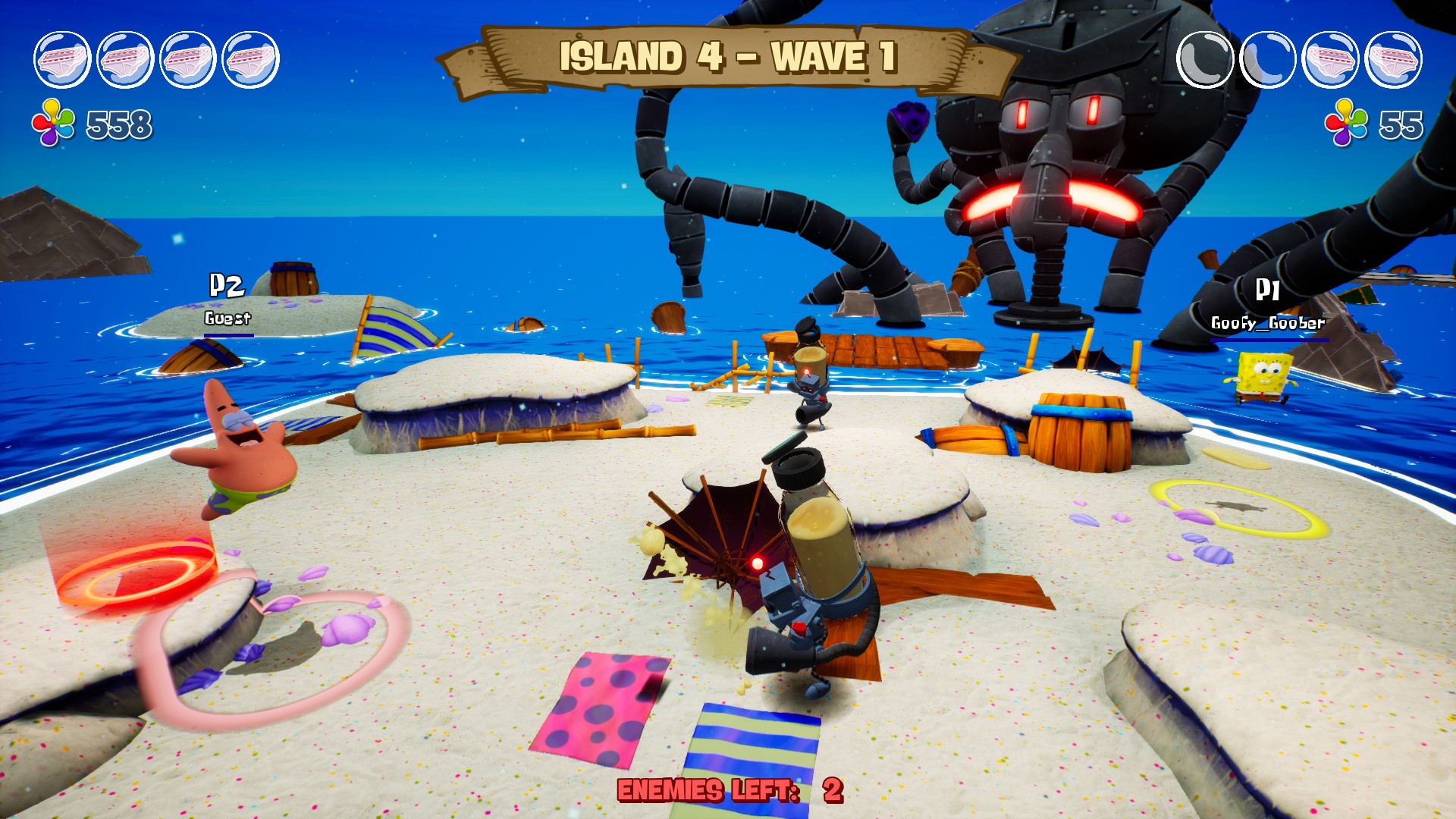 Other than that I don’t really have any complaints about this game. Most of the critics I saw online were addressing how the game didn’t change that much from the original. And that’s not 100% false, this remake stays true to the original game, but I can’t really see why that’s a problem. And as for the other complaints (the game being too punishing), they don’t hold water at all. Overall, if you enjoy platformers in any shape or form, especially old-school ones, you’ll most likely enjoy Battle for Bikini Bottom as well.

As for the sound design, there’s not much to complain about. The sound effects come right out of the show and there are some great tracks featured in the soundtrack as well (F.U.N song standing out). Most of the characters are voiced by the series’ original cast with the exception of Mr. Krabs, but that really isn’t an issue of the design as much as it’s an issue of licensing and legal problems.

Accessibility wise, this game is clearly meant for a younger audience, so the stages are never meant to be a serious challenge. The controls are also pretty simple, I even tried playing with a mouse and keyboard (which for most platformers is a huge issue) and it worked well. As for the replayability, you can always try to 100% and complete the stages which is really fun and will take some time, but I wouldn’t recommend buying this game with the hopes that the multiplayer will let you play for hundreds of hours.