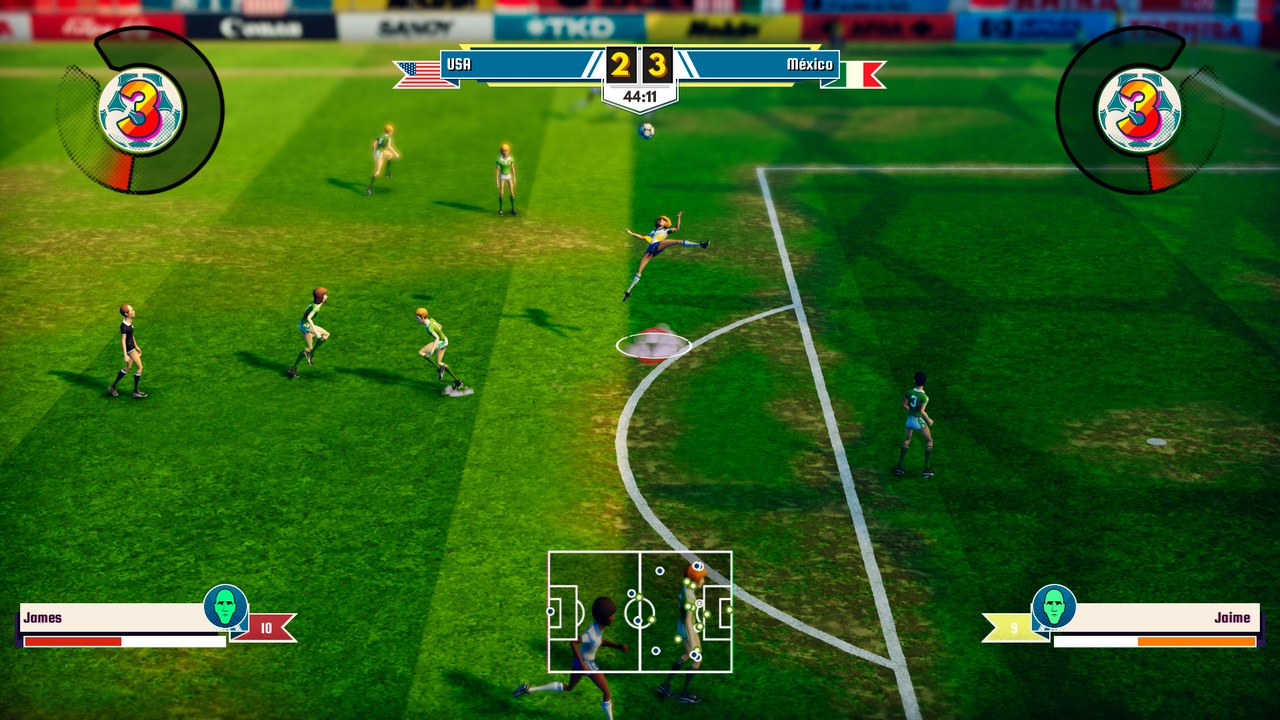 Football in the gaming world is eclipsed by one king, and that king is FIFA. With its very small shadow which is Pro Evolution Soccer, it just shows that the competition in this genre is extremely fierce. You may have read my recent review of Golazo! which was an arcade football game that was very well received, so when I spotted another similar title in Legendary Eleven I was pleased. It is a genre that I’d love to see someone have a real crack at and pull it off, as we haven’t seen arcade football titles work well since the 90’s and early 2000’s.

I absolutely loved the retro style of this title by Eclipse Games the minute I booted the game up. Straight away the loading screen gave me an insight into what I was expecting and gave a real early 90’s vibe and revived the youth in my mind. The graphics are as you’d expect, cartoony yet elegant. Now as you navigate the menus there are several options such as practice match, tournaments, challenges and online play. I’ll get the online aspect out of the way now and state that it includes the option to invite a friend to play against. There is no option to match against random opponents, but at least they have the ability to increase the longevity of the title if you have a few mates who want to grab this or if you game share with someone. 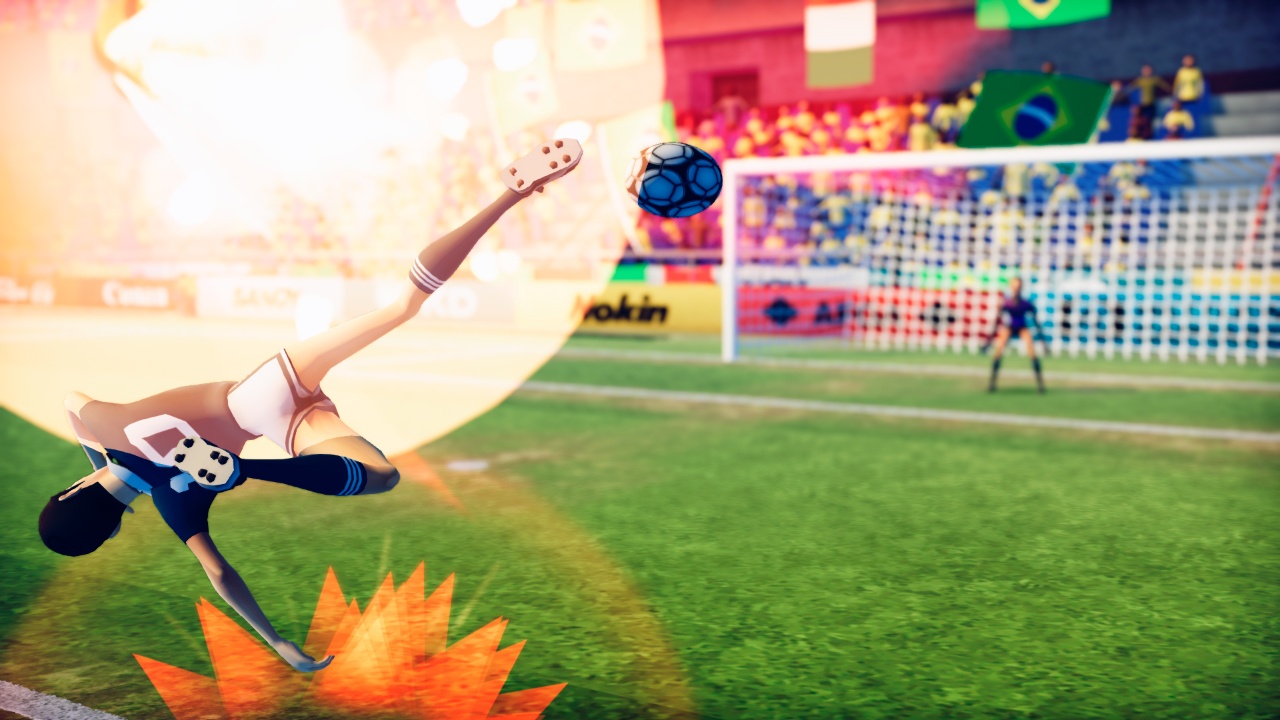 So how does the game play I hear you ask. With practice match at the ready, I thought I’d start nice and simple just to get the feel of the game. You’ll notice as you kick off that it plays at a much slower pace than other football games you may be used to. However, this isn’t a bad thing as it gives you a little wriggle room to ensure you play the right pass, through ball or shot. The fluidity is a little off point as you do feel like the players are a little rigid when advancing up the flanks or through the middle, but I wasn’t expecting a match engine that is as advanced as a AAA football game to be honest. This doesn’t ruin the game in any way, shape or form however, as other aspects of the gameplay make up for any flaws.

When I say other aspects I am talking about the sheer excitement I found from finding some space to take a long range shot or plotting a sliding tackle in the hope I would pluck the ball from the opponents feet. There is a genuine exhilaration from attempting to score from long range as you actually feel like you can pull off a goal and even missing these opportunities feels great. Crossing balls into the box appeared to be extremely difficult to gain a connection with a player, so I did find myself dismissing crossed balls and attempted to run at the defence and hope I could gain the advantage this way. If you did manage to connect a cross or long ball it was very rewarding feel and often you could convert the connecting cross to a goal. There was a special option when attacking if you got lucky and in the right position, the attacker would set himself up for a bicycle kick and smash the ball into the back of the next with the tap of the B button on Xbox. As unrealistic as these moments would be in the real game, it felt very gratifying.

The collection of teams in Legendary Eleven consist entirely of national sides across the world and there are a lot of them to choose from. Unfortunately player names are not based on actual players but even if they were, it wouldn’t really benefit the game in any way. League sides would be welcomed but for a game of this price point, may be too much of an ask and licensing is always an issue in this respect. As you progress through the game you can unlock cards which can be used as perks per se, giving you the ability to have a speed boost for instance or a relaxed referee who will turn a blind eye at some decisions. This reminded of other sports games of this calibre such as NHL 3v3 or NBA Jam back in the day. 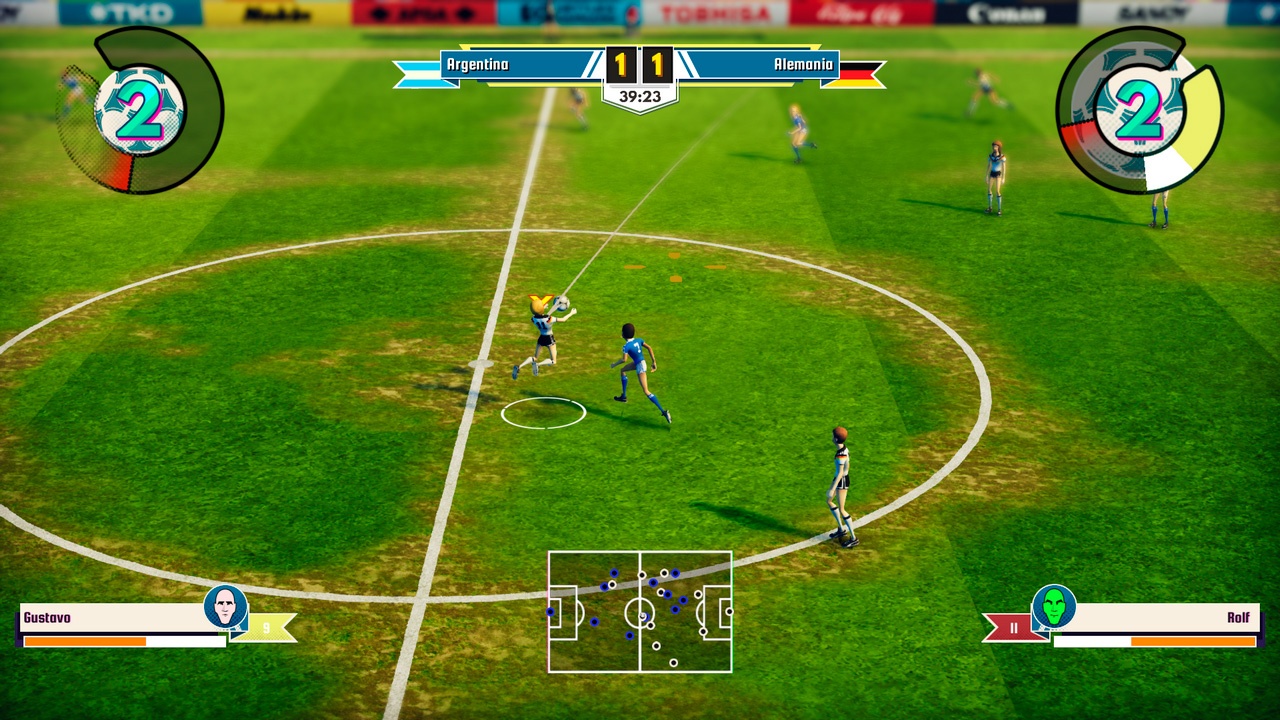 Whilst I found the first match I played a challenge as I was getting used to how it played out, it then became too easy at stages. I went from scraping a 1-0 win to winning 9-1 and all tactics seem to go out of the window, as it becomes a case of pass from player to player, make a run, find some space and shoot and score. When it stopped becoming a challenge this is when the fun started to die down for me. Think of playing FIFA on amateur and you’re ticking the same box here. The AI is very lazy and they don’t take up positions you’re wanting them to and from the opposing team perspective in a real game of football, you’d expect them to occupy specific areas of the field. Eventually you’ll think of it as all the players running around aimlessly and even a Sunday league game would have more structure.

This is again where you have to get out of your head that its not based on realism. It’s designed as a bit of fun and with friends and I would have thought all of these aspects I have gone through would make it a lot more fun. Whilst the online option is very welcome in any game I just wish that they had added the ability to play against randoms with some kind of levelling system. If this was a feature I would have continued to play, but for now its a case of tournaments, challenges or a game with a friend on or offline. All things considered Legendary Eleven, for its price, was a fun title to experience and I genuinely enjoyed it to a point and with some tweaks here and there, it could have increased longevity. If you’re an avid football fan its worth a try for sure!

Legendary Eleven doesn’t tick all of the boxes in the world of football but it does get most things right. Avid football fans who want to relive the 80’s or 90’s will want to give this a go!