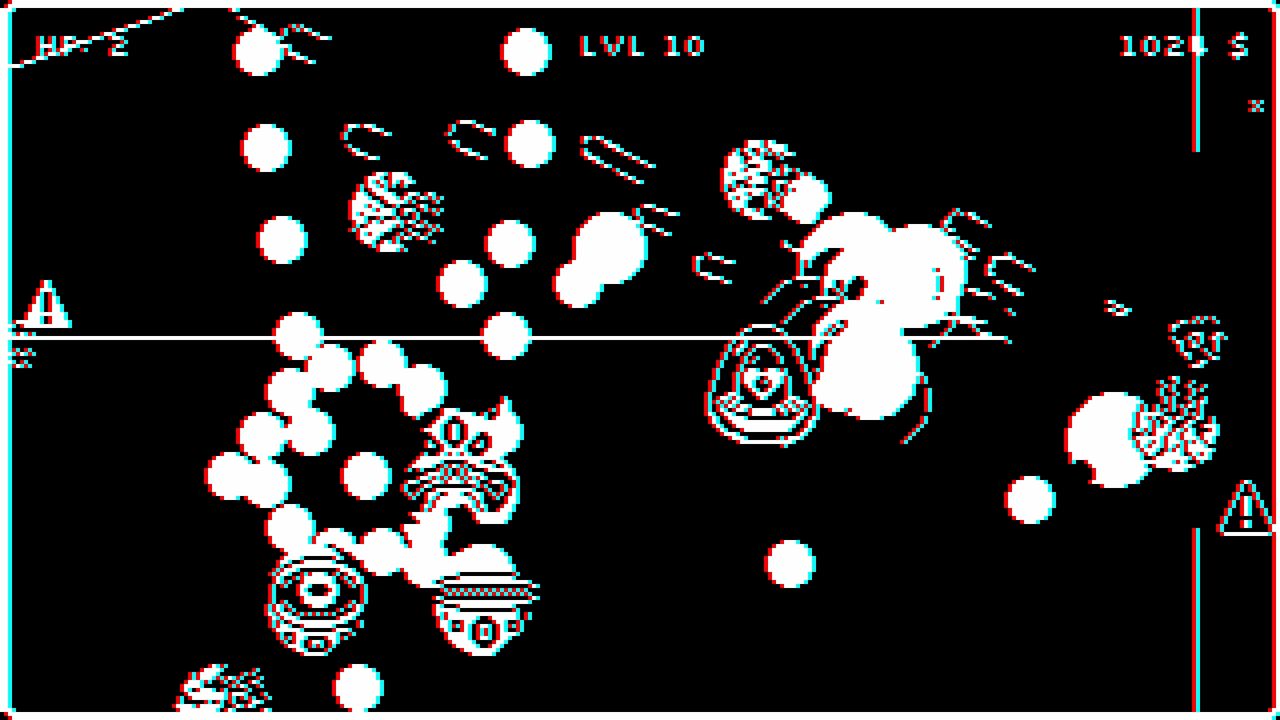 There is something that I straight up respect about Null Drifter, an arcade shooter that comes from Panda Indie Soft via EastAsiaSoft. There is a whole world out there of gaming and ideas that constantly seems to be changing, be evolving, be trying to reinvent the wheel or find a whole new way to move about altogether. Arcade-style games are a tricky thing to master and do well because there’s so much to consider in their creation. Do you want to intermingle story with gameplay? Will this port well to a console experience where quarters are not a priority? Can players find interest in a game that conceivably has no end and, for all intents and purposes, no beginning? Null Drifter is a strong example that screams that it’s not only possible, but it might even be better as a result.

The description from their website says that Null Drifter is a 1-bit, LOFI shooter, and I suppose that’s exactly on the nose. You get dropped into the game after a very brief splash screen that reminds me of an old Commodore 64 window, telling you that there are no microtransactions and also that this game is not for children, both strange proclamations to have prior to playing. A couple of seconds shows you where the controls for the game are (move, shoot and dash), and then you’re off to the races. In this monochromatic minefield, you must pilot your ship around a dead screen, while enemies appear (with warning signals to indicate from where) and attack you in a variety of ways. Either you shoot them till they explode into coins or they eventually run away off screen, both are possible. Live through enough enemies and the stage boss will appear, which is randomized based off of the unlocked boss pool (more on that in a moment). Defeat the boss to move onto the next stage, where the enemies all ratchet things up a notch. Continue this formula until you’re completely dead from lack of lives. 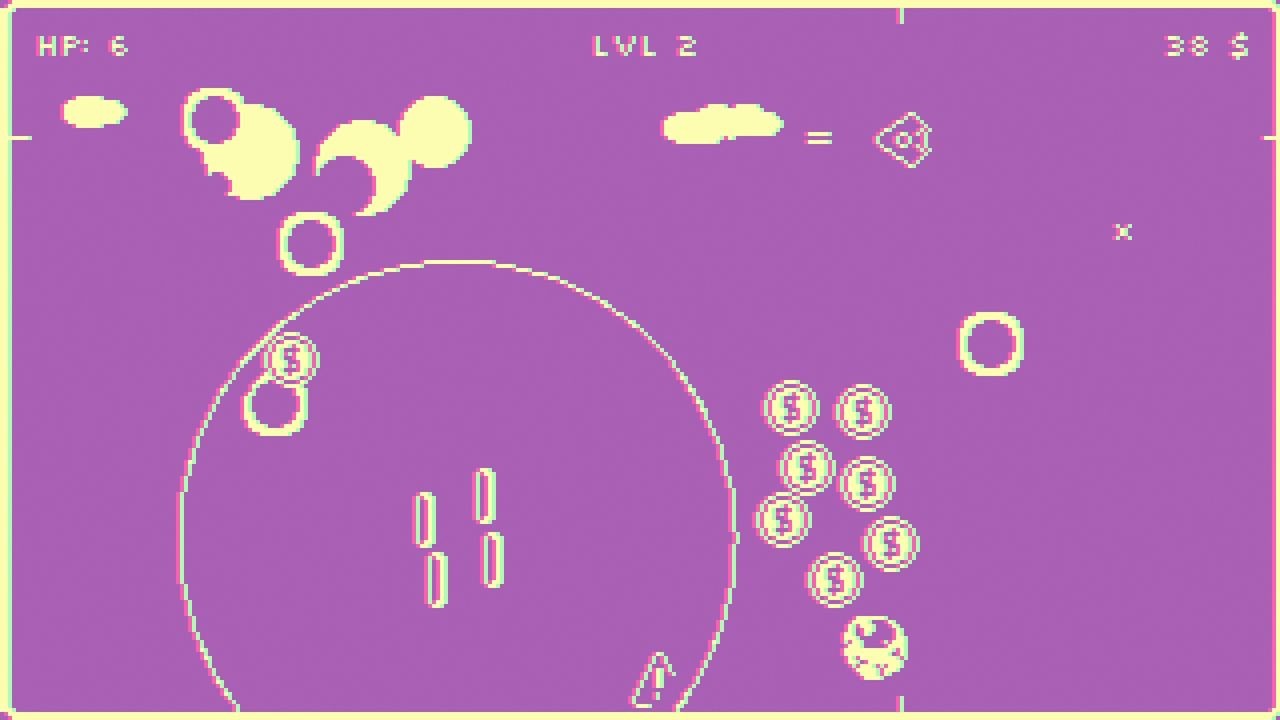 If that’s where the article ended, then you’d get the impression that Null Drifter was nothing more than a modern version of Galaga meets Asteroid, but I’m pleased to report that it’s so much more than that. Firstly, the coins are the most valuable aspect of replay in the game sense. The coins are used at the conclusion of each game to buy powerups, both permanent and temporary, to help out on future runs. Improve your health, increase your bullet rate and damage, and speed up your dash refractory to help you get further and further each time. You can also add things like “50% more powerup drops” to temporarily make the next run better, and I highly encourage dropping the 25 coins every time this is available. The powerups that come from drops can help your ship go well beyond the ultimate stock state, which is the only real way to survive after a certain period of time. You can be spraying every square inch of screen with bullets relentlessly and still not have enough time to breathe before being overwhelmed by enemies from every angle, the screen full of killer rings and screaming skulls, so might as well push yourself to God Mode before everything goes dark. I love improvements, and this game allows you to upgrade constantly.

Secondly, the unlocks for the game itself. Besides the coins, playing and accomplishing a secret set of parameters allows more and more elements of this game to become available, and not all are happy for you. Null Drifter will gradually partition out additional palette swaps (for a more colorful experience) and new guns to unlock (shotgun!), but it also keeps unlocking more bosses and minions to keep the waves interesting. Oh, were you too bored by the simple asteroids and eyeballs with laser beams? Well, now there’s bouncing oval monsters, what looks like giant voodoo golems, oh, and you can unlock a miniature version of Cthulhu as a boss. As you get better within your ship and getting to higher levels, the game expects more out of you and delivers as such in turn. You suddenly realize that the “easy” levels are still being peppered with a vast gallery of baddies and ways that you can screw up early on, and this never feels like it decreases, only accelerates. Null Drifter knows you’re learning, and it’s learning too, and it’s learning to mess with you on brand new surfaces.

Ignoring what I said earlier about the simplicity of the controls, it’s important to note that Null Drifter does demand a lot out of you after about stage four, but it could honestly come as early as stage one. You’ve got 360 degrees of moving and shooting with unlimited bullets, and you have to learn that just firing in straight lines won’t get you anywhere. You need to stay nimble and alert, watching out for the flashing signal that an enemy is about to appear and train your gun on it even before it fully spawns. Beyond that, you also need to understand the importance of your dash, a technique that I don’t think our ancestors even could have coded into older games. The dash is a brief window of invulnerability that serves a threefold purpose. One, it’s an option to get out of bullet walls if you’re not confident in weaving between shots. Two, it’s the only way to get out of radius strikes that certain enemies AND bosses will blow off, and you need to know when to use it and how long you’ll be okay for. Three, it’s actually a good attacking technique if you’re up against the wall. You can dash to damage or kill enemies, but it feels like a risky manoeuvre, yet the game reminds you constantly that dash killing is a way to get things done. For something with only three controls, Null Drifter is shockingly complex in how to best make it through. 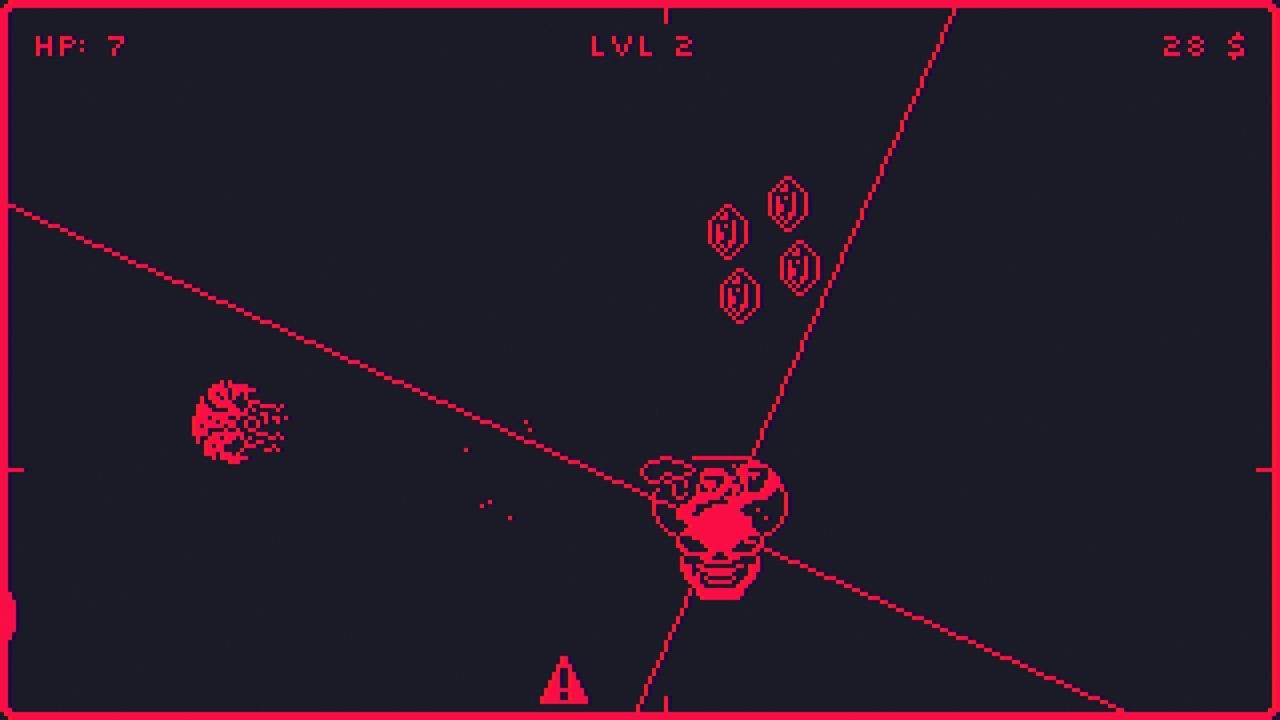 But it all loops back to the presentation. Null Drifter is such a wonderfully odd game in how it handles and presents itself. It’s got this ancient, alien feel to it, something that we saw a bit in games like Pony Island where there’s old tech ideas mixed in with cryptic, almost foreboding messages that pop up. Play hints and tips are intermingled with jargon including a random welcome to an unknown player name every time. The chaos on screen is beautifully balanced by an incredibly chill soundtrack, which is all piano, drum and gentle beats that do accelerate but never seem to match what’s happening in the arena. You can paint it all in a bizarre set of color tones to help underline the absurdity of it all (my favorite is “chicken nugget”) and it just keeps calling you back in. It’s so easy to get into a single game and then fight your way to the end, which, in my case, is level 13 and no more. Keep the music on, by the way: it acts as a tempo to let you know where you should be, and the game is also more stressful without the paced but relaxing music to keep you grounded.

Straight up, I enjoyed the hell out of my time with Null Drifter, and I need to keep this on my Switch to act as a reset point. I’ve got all these other things going on right now in the world and on my Switch, and it’s nice to dive into organized chaos, blow up a few things, and let myself get totally drawn into a simple idea with hints at something deeper, but nothing really too addicting. It’s worth the time, and it’s worth the money. If you want something with a lot of replay and not a lot of thinking, get pulled into the Null at your earliest convenience.

I can’t believe how much I played this game and how much I kept wanting to play more.