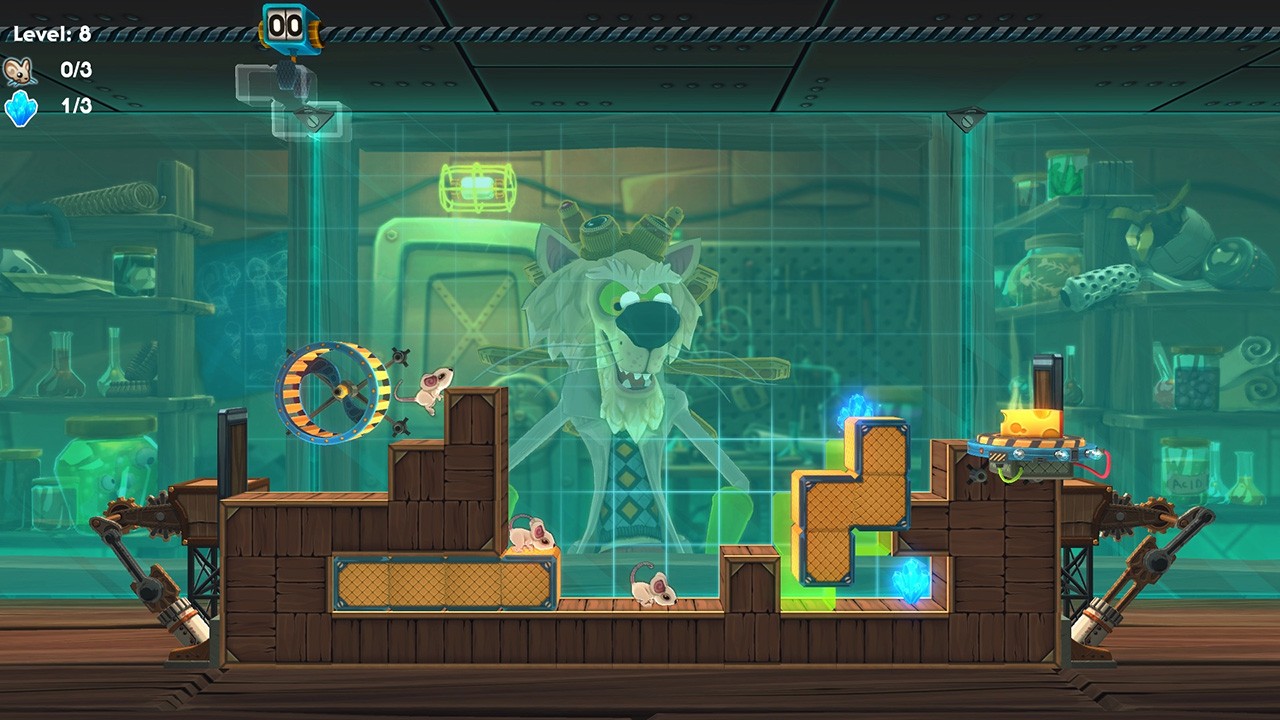 H.P. Lovecraft is hardly underused these days – there isn’t a title that doesn’t make a passing comment about Cthulhu to some extent, so getting a sadistic mouse game that lightly refers to the author in name alone isn’t entirely new. However, a fresh take on the Lemmings idea is welcomed with open arms, in this puzzle game, Mousecraft.

Lemmings is an easy reference, but it’s a combination of this, Chu Chu Rocket, Tetris, and any other mobile-type game you’ve played recently that has you solving puzzles to save a flock of sheep, raindrops or mice. Mousecraft isn’t a unique title, but it’s certainly a fun one to get stuck into, only if you’re a fan of these type of titles – this isn’t likely to reinvent the wheel and lure in new players.

The driving force of the game is a cat scientist, Schrödinger, who is trying to unlock the power of a mouse-led machine. To do so, he needs an endless supply of cheese. The introductory story tells his plight of having to fork out for these supplies out of his pocket. 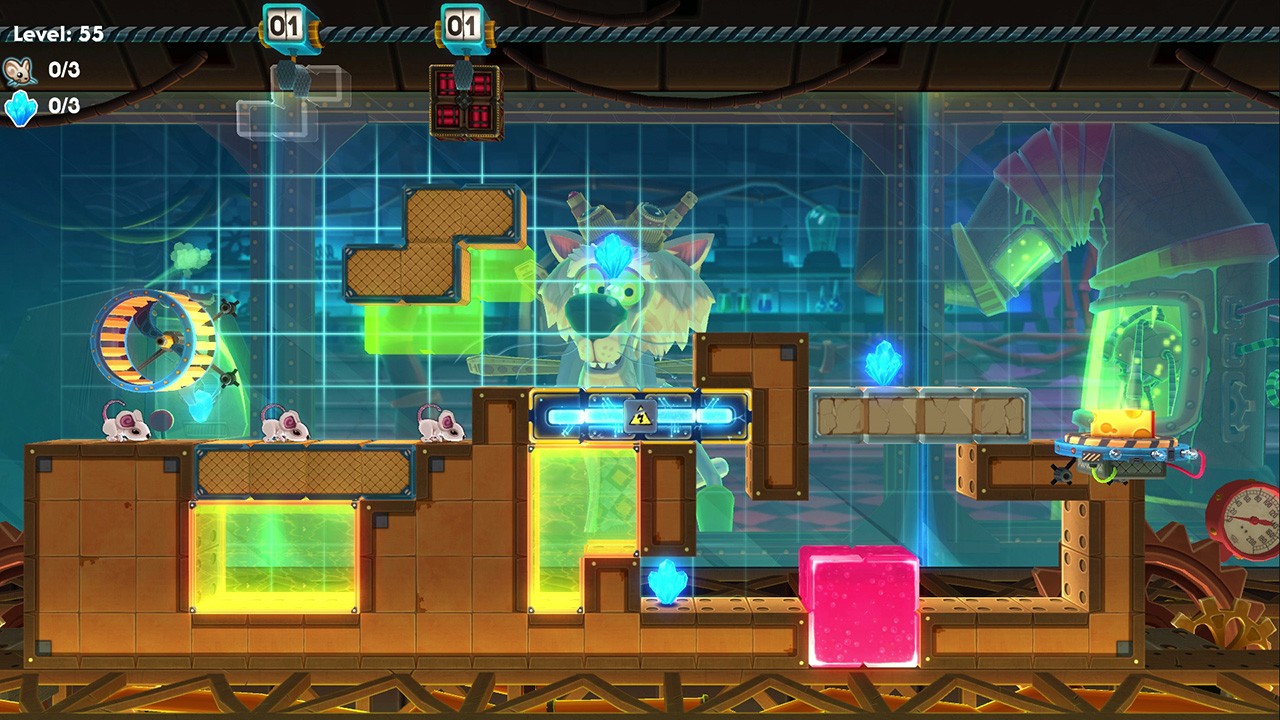 At the start of each level, you have a selection of Tetris-like blocks to place around the level, allowing the mice to reach the cheese. By default, they make their way from left to right and can climb one block high. However, there will be gaps to fill or places to reach where you’ll need to place the right block strategically, plus move in the manoeuvre position. Much like Tetris, you can rotate each block with the L and R buttons, then A to place. If you make a mistake, you can use the undo button, ZL, but when you are ready, you press the Y button then the mice are released and fumble over your chosen path. If you make a mistake and want to try again, or confident that they will survive, you can press the ZR button and the animation will speed up.

The first few levels are to ease you in, so it’s child’s play to get a perfect score (perfect means all mice reach the goal, and you collect all the available valuables). All easy things come to an end, though, and a variety of hazards are introduced. This makes it a little trickier to navigate, and this is when you start losing the cute little mice. You may have already experienced this if you inadvertently dropped a block on one of them – it’ll kill it outright, sending it up to the mouse house in the sky.

When you start, you can place your blocks then release the mice, but in later levels, you have to unleash them first, wait for them to get past a certain point, then place a block. This adds a little urgency to the puzzle-solving as you need to get your timing right; however, it never feels overwhelming as you can either pause the game to work out your next move or rewind a few steps and try again. In this case, the pace is ideal, and it feels like a real problem solver that you have time to think about rather than go in gung-ho and wing it.

As you progress through each stage, you unlock Anima shards, which can also be collected in-game by directing the mice. Pick up all available shards to get a perfect score – simple as that. It’s a little deceiving at first as you almost feel it’s impossible not to get a perfect score. Even with the levels where you repeat go once or twice to collect all the shards, it doesn’t feel remotely taxing. The puzzles, for the most part in Mousecraft, feel intuitive. Then you get knocked off your pedestal, and a new mechanic is introduced such as the brick bomb. While it won’t harm the mice, having another thing to think about (in this case, the removal of blocks that have already been placed), makes Mousecraft increasingly difficult, though never to the point of hair-pulling. Much. 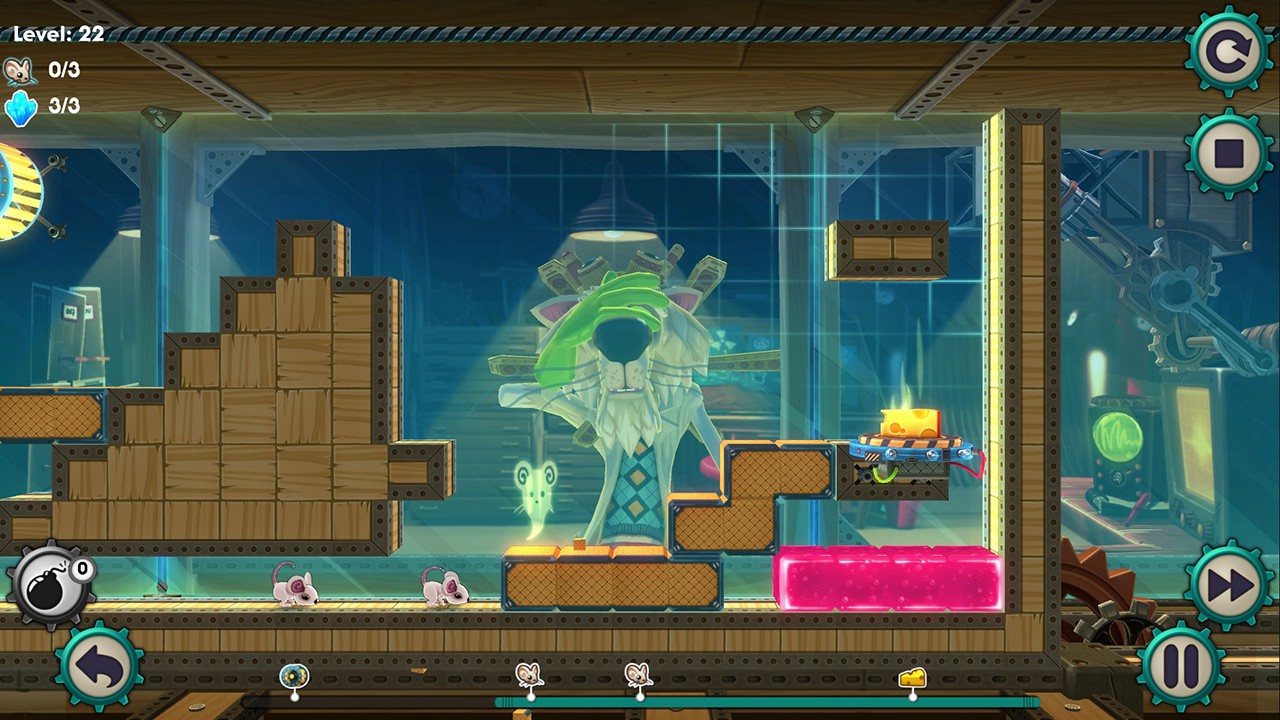 The layout of each map is big and bold. In the background scenery, at the beginning, we see an animated Schrödinger excitedly watch on as the mice are lead to the cheese. There appears to be a lot going on onscreen, but it never feels cluttered, and you can concentrate on getting those mice to safety. Rather than go for a retro soundtrack or irrelevant dance track, the music in Mousecraft is fantastic and a real highlight of the game. Sound effects in-game are ok, but nothing to write home about. Besides, the score takes over, and it has a somewhat Danny Elfman feel to it (the same composer used in most Tim Burton films).

Before playing the game, I had a look at the trailer. Based on the voiceover, I expected Schrödinger to have a speaking part in the game, but this is only represented in the text. Granted, the narration in the trailer was borderline annoying, so it may have ended up being a wise decision to keep him mute, but it would have been nice to have him a little involved. It’s a nice touch to have him watching on from behind the glass, but would have preferred a bit more interaction. His presence felt a little reserved and diluted the story a bit. That said, most puzzle games should be able to stand out without any gimmicks and Mousecraft certainly does. I do think they could have played a little more on the comedy; however, as the promotional material gives the impression that this is wackier than it actually plays.

Earlier I mentioned that Mousecraft doesn’t reinvent the wheel for puzzle games. If you have a penchant for the genre, then you’ll be entertained without a doubt, though if you don’t have the patience or even the slightest bit of interest in puzzle solving, then this isn’t for you. There are over 80 levels in total, and it’s suggested that this will take 6-10 hours of gameplay, but that’s always relative to how good you are at a game and whether you relish in each handcrafted area. Other than collecting all the shards in the game (you need these to progress to the later sections – all represented by blueprints), there are unlockable achievements in-game. Sure, they aren’t the most challenging, but will give you an incentive to try submerge a mouse without them drowning for example.

As a puzzle game, it’s great and offers a decent challenge, is very well presented and has a good amount of replay value.