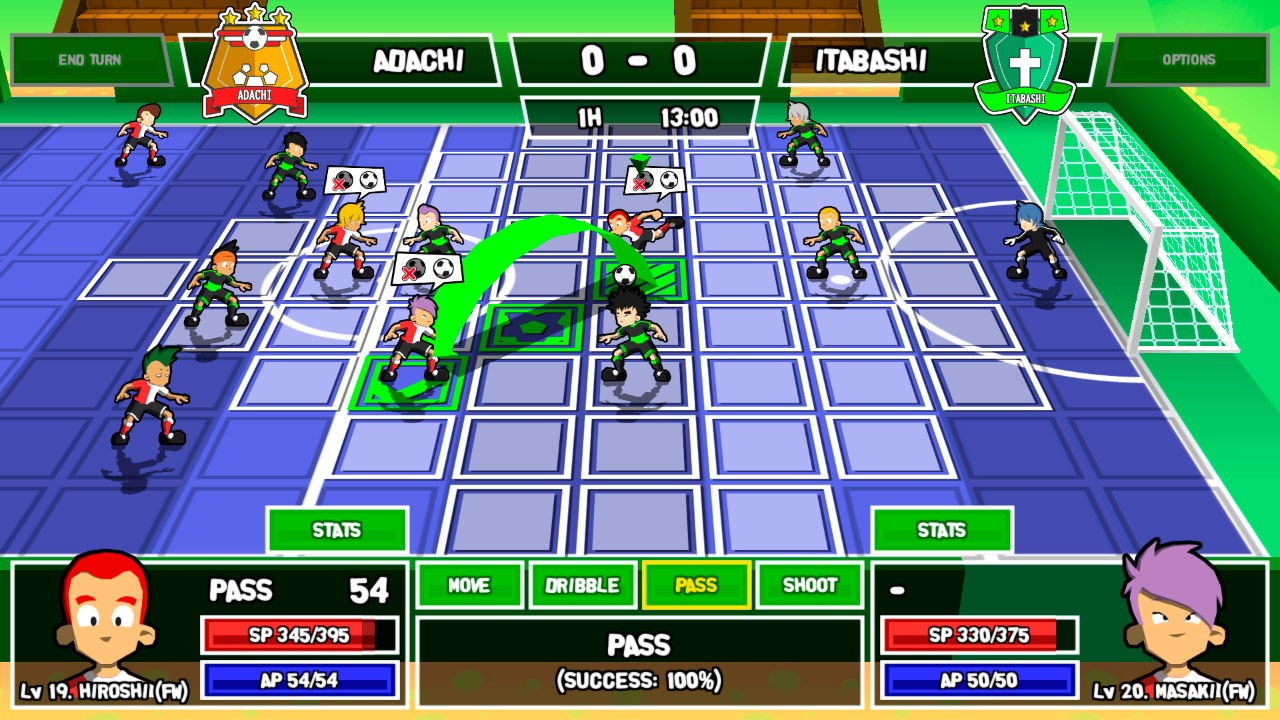 Football is a sport that feels very kinetic. Men and women hurling their bodies across the pitch, shoes digging into the ground as they sprint across open ground. A simple misstep or the errant angle of a foot sending the ball spiraling out of bounds. The action is only barely contained, and at any moment, the fate could turn, the ball changes possession, and the haste resumes as both teams turn the other direction and throw themselves into motion once again.

That sort of kinetic poetry is something that feels inextricable from the sport, and is also something Ganbare! Super Strikers does not quiet nail.

Ganbare! Super Strikers is a turn-based, gridded strategy game in which a player-created team must travel through the National and World Cup tournaments. Each match is played on a 14 x 9 cell grid, where two teams of seven players compete for better field position, good team arrangement, and stronger passing and shooting angles. Given the nature of turn-based strategies, player positioning and consideration of various angles is the bulk of how the player can really impact the state of the game.

Each turn is broken into halves, where each player on the field can separate their turn into two verbs. Players can Move, Pass, Tackle, or Shoot. Players can choose any two of these options during their turn, though things like passing, tackling, and shooting are limited by who has the ball and how far they are from the player attempting them. Generally, turns can be broken up into moving twice, or doing any other action and moving in the same turn. 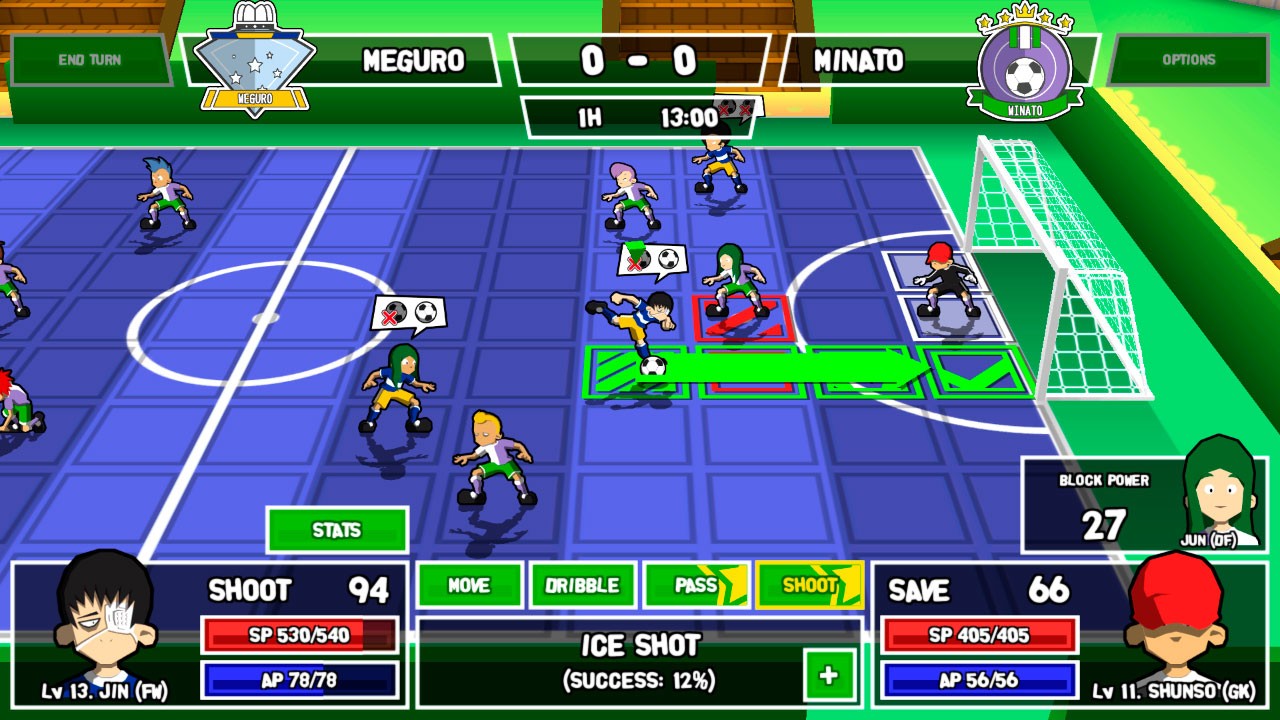 Each individual player on the team has a set of attributes, skills at which they excel. Some players are better at dribbling, others are tackling, forwards tend to have shooting skills, and the center needs a strong stamina for frequent sprints back and forth to aid the attackers or defenders as the needs arise. These stats form the baseline for individual player performance, but is further modified by dice rolls once the game is in play. In order to augment these stats, over the course of the tournament, players unlock equipment which they can use to add to their base stats, and in some cases, offer augmented versions of their basic Shooting, Tackling, and Dribbling skills. These augments not only increase the base skill-level of the actions, but also have the chance of causing an additional effect against opposing players. As the players unlock more skills, their options increase at a very accelerated rate, and the ways a player can really expect to succeed opens up.

When two players clash, be it one player’s Dribble contested against another’s Tackle, the game randomises as dice roll in addition to players’ base skills. If the opposing players skill lands ahead, they intercept the ball. In the case of passing, if the blocking player fails to intercept the ball, their attempted block still impacts the pass velocity, which could cause the ball to fall short. These little clashes happen automatically any time a player tries to use their skill against another. Any time a player fails in a tackle or block attempt, they enter a temporary state where they cannot attempt to block or intercept until the end of that turn. This keeps single players from, for example, tackling an opposing player and also attempting to block their shot in the same turn.

Between the limited skills and automatic pauses after attempting to intercept aggressive players, the early part of the game is extremely glacial. Early matches at the tournament feel like exercises in futility, as an opposing team with high passing and dribble scores can sail through three or four defenders in the same turn, establish a good shot angle, and fire one into the net two turns from the kick-off, repeatedly. And no amount of aggressive field positioning or blockers can seem to slow that down. It will eventually exhaust the stamina of the attackers, but not before winding the defending players as well.

Put briefly, Ganbare! Super Strikers is a game that’s slow to start, and having to slog through the aggressively randomised dice rolls, to find enough outcomes in the right order to add up to a winning game is a bitter pill to swallow when the game should be at its most engaging and inviting. 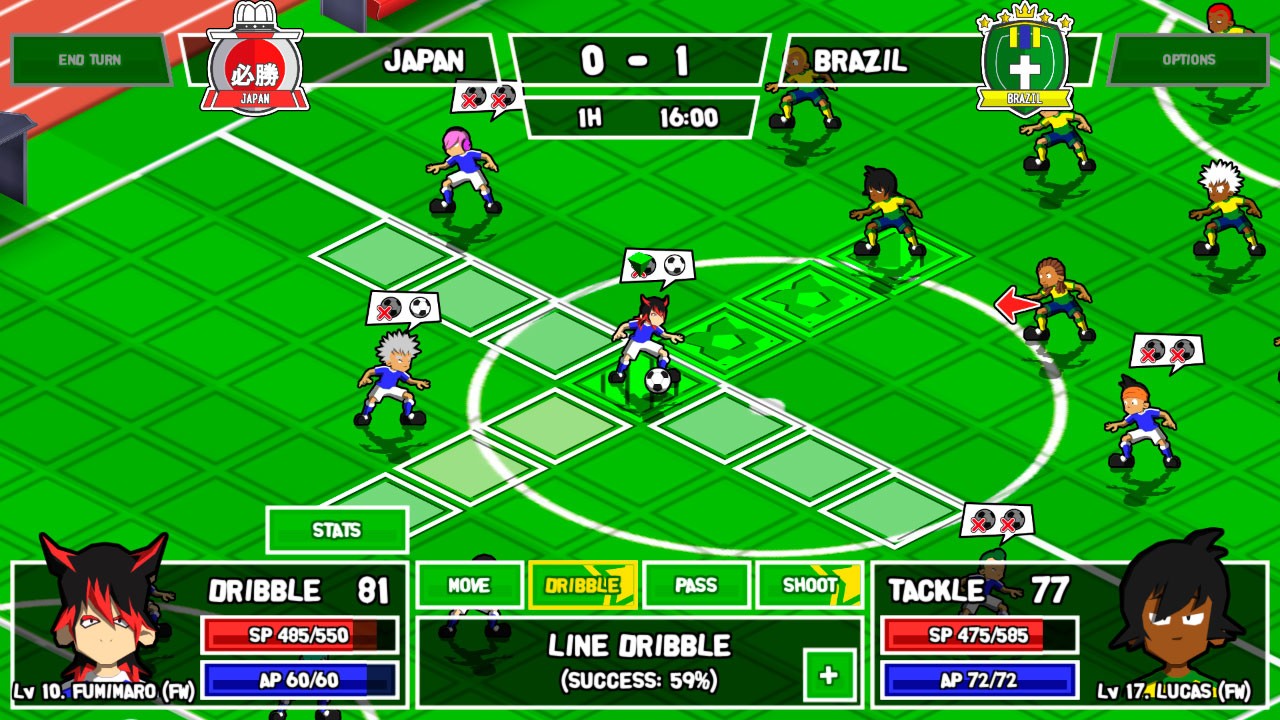 As the game proceeds, and players start to really develop both their passive and active skills, the grid-positioning and team play become far more important, and the strategy starts to take a more engaging role. Unfortunately, I suspect it will be too little, too late for most players. Having to grind through early games, just drumming up experience for improved stamina and unlocking player skills is just asking a bit too much from players still getting their feet under them.

The game could make up the difference, perhaps with a compelling story and a powerful soundtrack, but it never does. The in-game music feels right at home with the game’s pixel aesthetic and 90s-era sports game aesthetic, but doesn’t offer a lot of variety from game to game. Most of the narrative beats happen between games, with the start of various tournament matches having some back-and-forth between players of either team. These moments feel largely impersonal, and in the case of repeated matches, repetitive. The feeling of progression is present, but never enough to really impact the player’s progress.

Taken in total, Ganbare! Super Strikers is a hard game to recommend. There are genuinely interesting mechanics, the active skills players unlock along the road lay the groundwork for pleasing moments mid-game, having a strategy pay off after a long string of passes or nail-biting runs past tacklers is decadent, but all of it feels gated behind an early game that feels entirely indifferent to the player’s entertainment.

There are other sports games with similar tones and campaigns, that execute on the same ambitions that Ganbare! Super Strikes aims for more successfully. As a result, it’s hard to choose to keep returning to Ganbare! with its same ideas pursued elsewhere more compellingly.

REVIEW CODE: A complimentary PlayStation Vita code was provided to Bonus Stage for this review. Please send all review code enquiries to press@4gn.co.uk.

Ganbare! Super Strikers enters a field with a lot of competitors in a variety of other genres. And though it’s by no means a bad game, its competitors have a lot of prestige behind them, and when they meet on the pitch, the scales always tip in favor of the others.