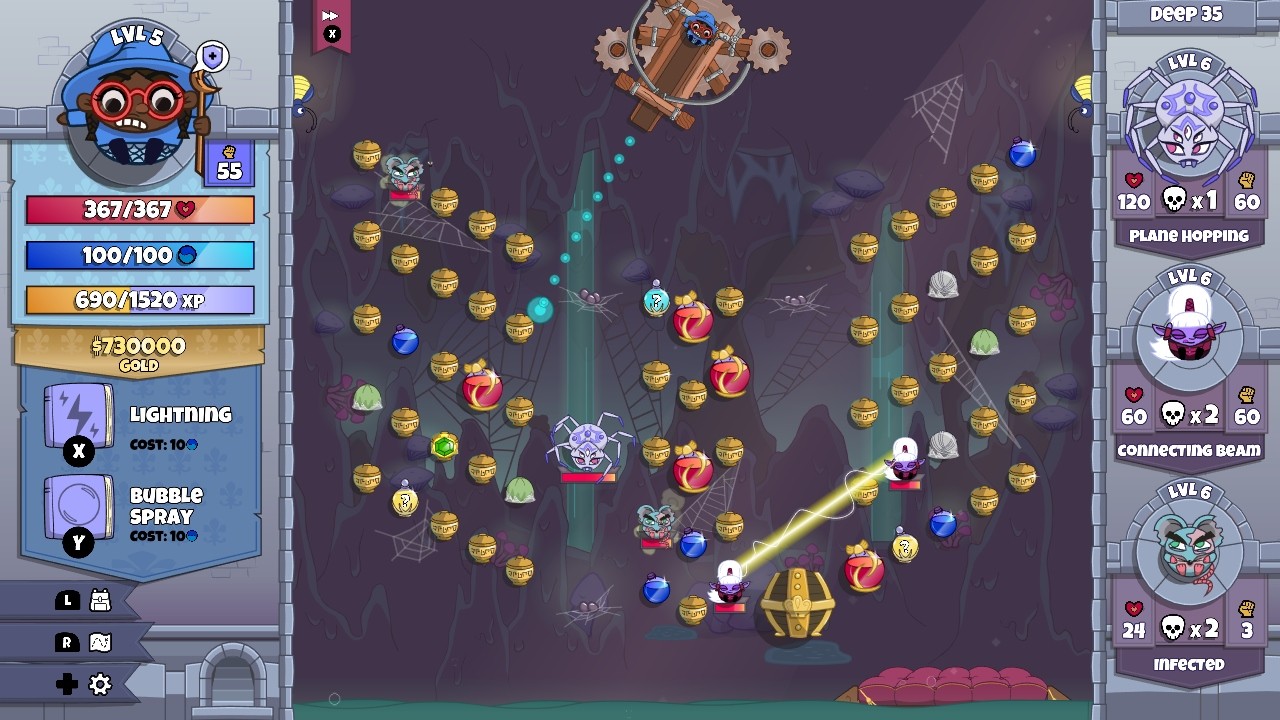 Role playing and rogue-like are two concepts that generally go hand-in-hand within many of today’s video games. However, many of these games play along a similar blueprint, with random dungeons, collectable or lost loot and a perma-death feature to make you powerful, yet vulnerable at the same time. This has resulted in a style of gaming that is beginning to feel the same in whatever title you may be playing. But how about throwing something different into the mix, something that adds a style of gameplay not often associated with either genre and one that brings a whole new dimension to the role-playing ethos, even if it is a concept that has been done before. Well, The Quantum Astrophysicists Guild and Wonderbelly Games have done just that, by taking the structure and gameplay of Peggle and mixing with a role-playing adventure and bringing a rogue-like element to produce Roundguard, as it bounces a release onto the Nintendo Switch.

We’ve all played Peggle, right? The pinball-physics styled game that involved bouncing around a level of pins, until they had all been broken and collecting a form of treasure from the bottom of the screen. Well, taking that concept and adding a role-playing mechanic along with a series of rogue-like elements, such as randomised levels, a dungeon to explore, hoards of gold to collect, mana and health potions and a variety of monsters to defeat and loot to collect and you’ve got Roundguard. It really is a refreshing take on two styles of gaming and one that works surprisingly well; to the point where it soon becomes an infatuation and a dangerously addictive game in a quest for online glory and bragging rights.

Before we get to the nitty-gritty of gameplay, let’s take a look at the story and the general premise of the questing adventure that awaits you. You play the game as one of three heroes, each with their own stats, combat and special abilities. First there’s the Warrior with his spin attack that smashes through obstacles and is laden with health and heavy attack stats. Then there’s the Wizard who is weak, but uses powerful magic to break pots of gold and defeat monsters and lastly, there’s the rogue, a mid-ranged hero who can double jump and change direction mid-flight, as well as smoke out and poison any foe that lay in their path. Whatever your chosen hero, your quest sees you traverse the dungeons of Castle Springbottom in order to save the King and recover the vast vaults of gold that lie within. 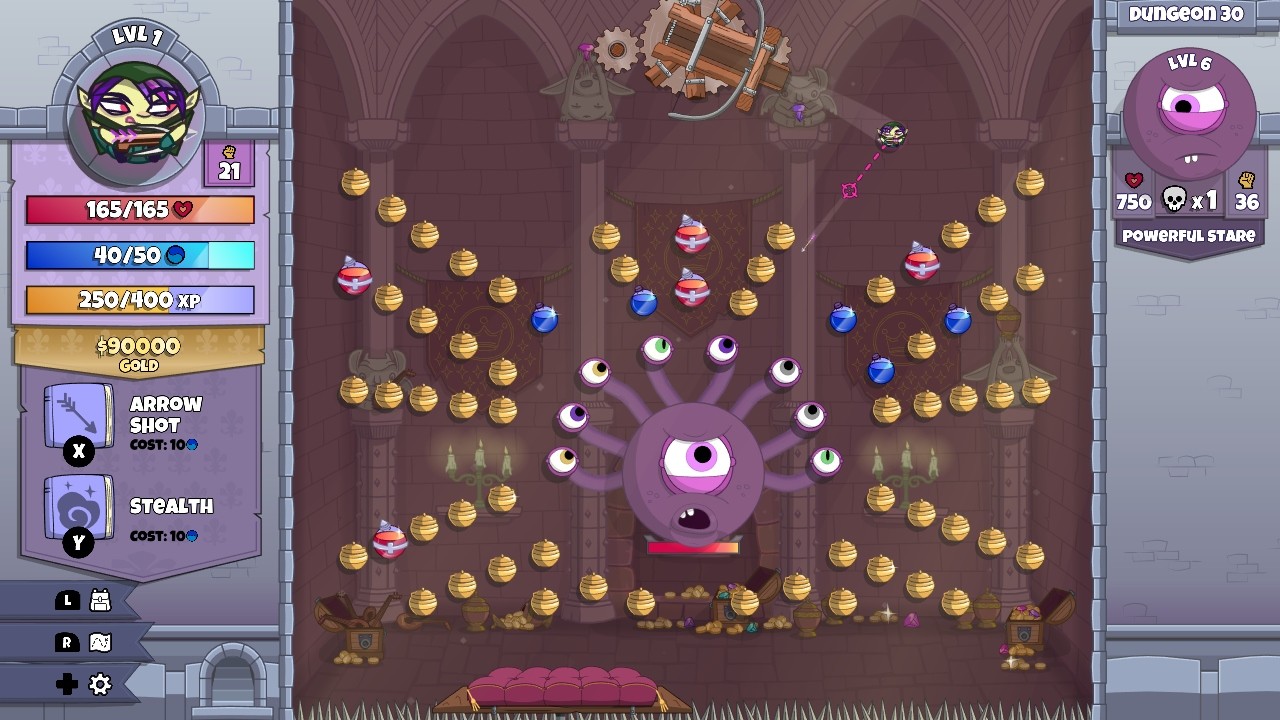 Much like Peggle, each level sees you propel your hero from a springboard at the top of the screen. From your chosen trajectory, you bounce around the stage, pinging between gold pots, mana and health potions and fighting monsters, before falling to the bottom of the level to relaunch yourself from the top. With limited health and mana, you must propel your hero in order to bounce into enemies, your attack values depleting their health, but theirs also taking away yours. You can also deploy your special abilities, but only as long as your mana reserves allow you to do so. Defeat all the enemies within the dungeon room and you complete the level. However, it’s also vitally important to collect potions to keep your health and mana topped up, as once your helath reached zero then your journey is over.

Once you eradicate the level of all enemies, your hero then falls to the bottom of the screen where a series of chests await. On whatever chest you land, is the one that you can open and collect the reward within. These can range from weapons, armours and passive abilities that can add a whole host of features from higher attack values, more health or mana, as well as immunities and attack options that can bleed, poison or weaken enemy types. Once you have collected your treasure, you then propel your hero along a series of chosen paths to venture deeper into the depths of the castle.

Each dungeon is made up of around fifteen floors and three areas to explore before reaching the end-game boss fight. Each dungeon level has a variety of pathways to different rooms, each of which hold a whole host of enemy types, treasure rooms, mid-level bosses and intermissions that sees you spinning a wheel of fortune. These intermission mini-games present you with further abilities or trinkets that can drastically alter the way the game plays. However, to increase your chances of winning a better prize, you must accrue a ton of gold; making the breaking of gold pots within each level an important asset too. However, one of the enticing features of this game, is the sheer amount of loot you can collect to make your hero more powerful as they delve deeper into the dungeons. 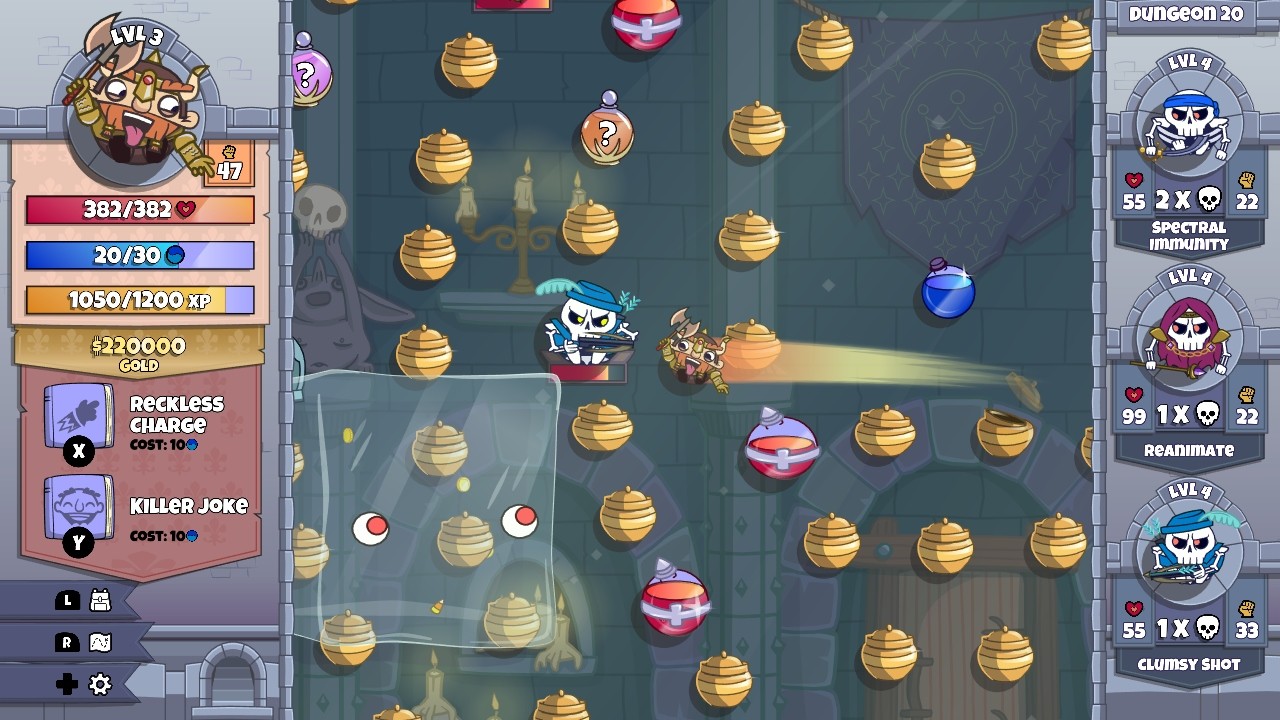 As you begin to accrue weapons and abilities, certain rooms also present you with side quests that need to fulfilled. These can range from killing five enemies in one move or collecting all gold pots within a level. By completing these tasks, you are awarded gold and extra abilities; although you can only equip two abilities at a time. With this in mind, with each new weapon, armour or ability you acquire, you have to choose whether you want to equip it or not. If you decide you don’t want to equip your new loot, you can then trade it in for more gold to add to your reserves. Although your ultimate goal is to reach the end-game, which takes around an hour or two to achieve, the collection of gold should be your second priority; as well as staying alive, of course! This is due to increasing your chance of gaining a relic, an item that can alter the state of the game to make it easier or present you with new challenges. However, your gold reserves also go towards your final scoring and, ultimately, your placing on an online leaderboard.

The game, as a whole, contains a very deep level of engagement and addictive fun. This is not only down to the core gameplay elements, but also to some tight and accurate controls, a high level of humour throughout and a presentational value that is both pleasing to the eye and ear. Plotting your trajectory and the physics from your aim, produces a very high degree of control over your character. Even when they are free-falling and bouncing around each level, you can adjust how your hero reacts with your special abilities; producing some very satisfying combos in pot and potion collections, as well as defeating numerous foes in a row. Constant banter between levels and the dungeon host during intermissions provides some light humour and a melodic background mixed with sound effects produces a feel-good arcade style that matches the high level of fun that is had with playing this game.

Overall, Roundguard is one of the most infuriatingly addictive games to have come out on the Nintendo Switch. Its hybrid mix of Peggle’s gameplay and a rogue-like role-player, combine to produce a unique style that takes it above and beyond Pop Cap’s original concept. It constantly rewards with over a hundred variations of loot, weaponry, armour, abilities and trinkets and its mini-game intermission provides an all-round, high level of alluring gameplay. With its ability to save the game at any time, this is a perfect casual game that matches the design specification of what the Switch was designed for and with that in mind, makes this another must-own game for Nintendo’s handheld.

What do you get if you cross Peggle with a rogue-like role-playing game? An infuriatingly addictive game called Roundguard, that’s what!