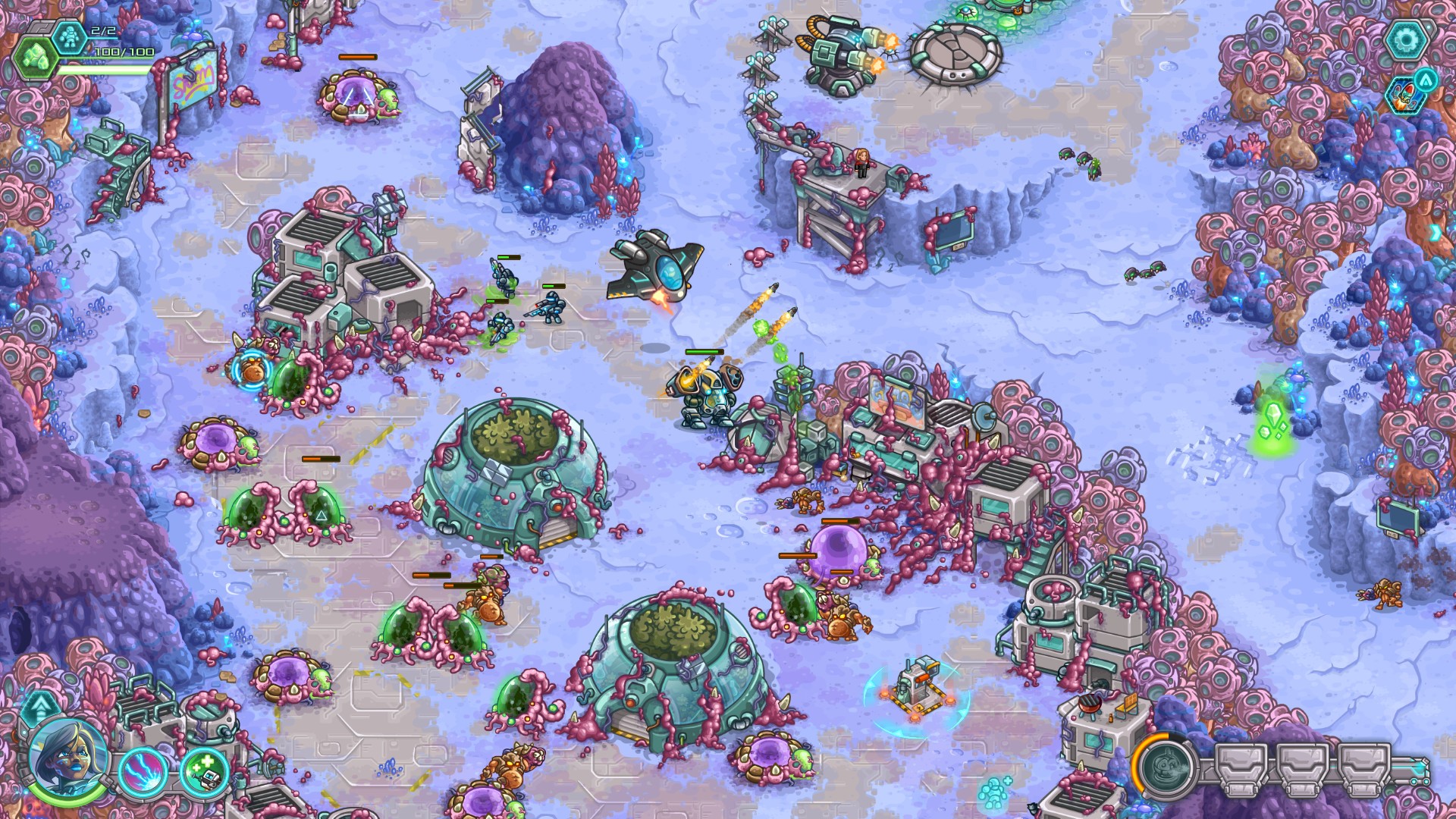 Strategy games are more than just a race to collect resources. With those resources, you build what you need to take the objectives that are vital to success. Iron Marines fuses the elements of a basic strategy game, but doesn’t do much more to set itself apart from others.

When I first start up the game, I notice the interface is basic. You have your mission points on a planet and you have the opportunity to pick any power ups or change out any special hero units you want to use on a mission. From this point, you start your mission and try to clear it out as efficiently as possible.

The story isn’t anything new to gawk at, but it did take inspiration from a lot of beloved sci-fi genres that are expected for RTS games. I had been tasked with the command of a group of colonial marines, fighting my way across a planet to gather resources and fight back the growing enemy race, the Fell. The Fell creatures will remind players of a certain race in a popular Blizzard franchise, but the obvious sign was the Fell had this grotesque feature to them when creating units or attacking my units with their turret structures.

The first mission I played was a simple tutorial mission. You start off with a command center, a hero unit, and the ability to create more troops. The troops you create are the standard infantry, sniper, or heavy mech units. I’ll go into more detail about their dynamics later on in this review.

Right out of the gate, I had to figure out how to build a small team of troops to destroy the enemy hive. The tutorial did a good job laying down the mechanics of every RTS, as I quickly created some standard infantry to accompany my hero unit. Troops are created in teams of three and after a certain point, you are capped out on units(unless you choose to upgrade your limit, which will also be discussed later). 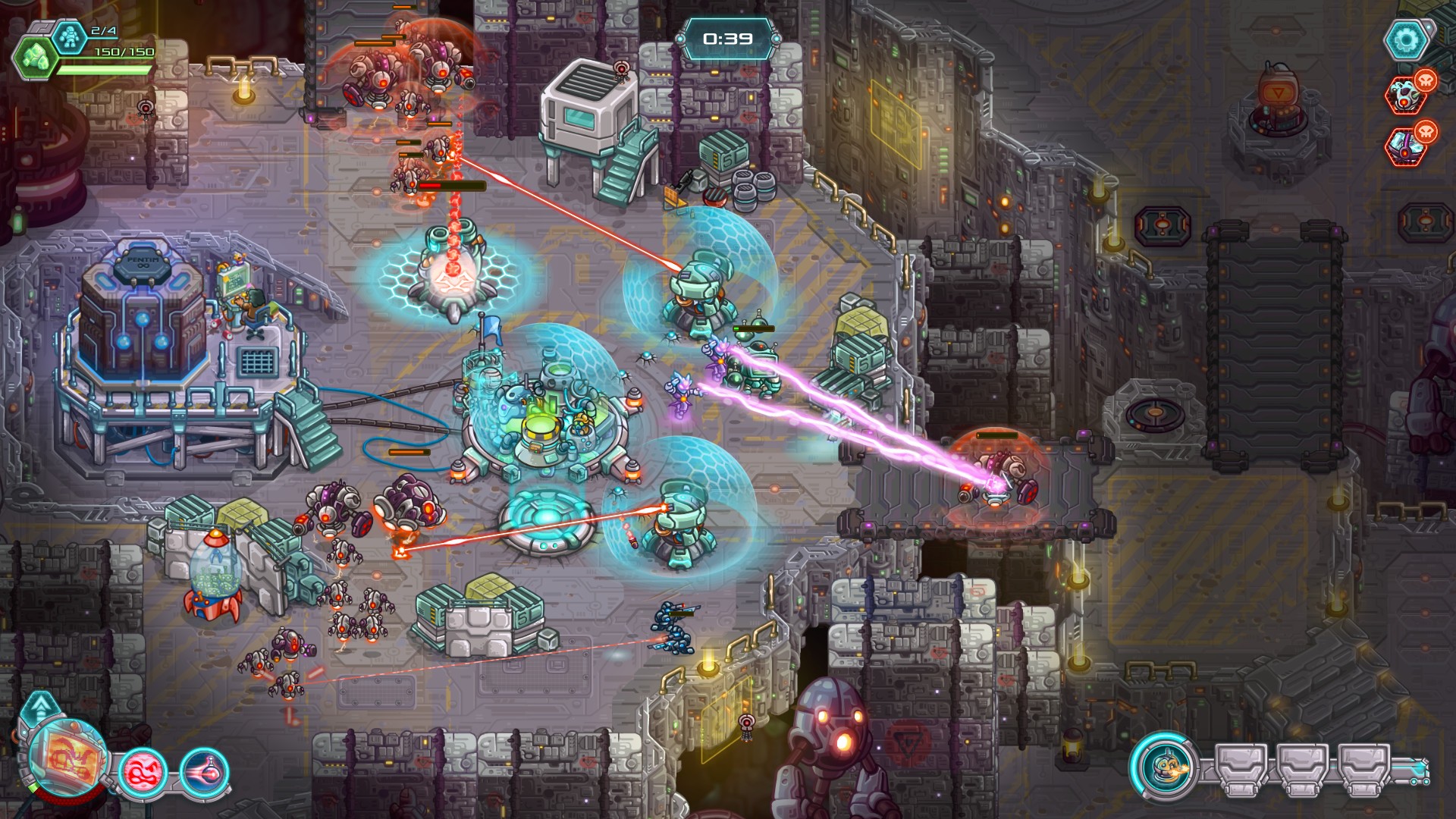 Rewards in the game are an important dynamic in Iron Marine’s DNA. With every mission I finished, I was awarded a number of credits. These credits were used to upgrade the dynamic skills path of my units. Some of the examples of these skills were firepower, defense, upgrading the unit cap on the field, or upgrading the amount of resources I could hold in order to create more troops.

The troops of my colonial marines are the bread and butter of your assault force. As mentioned earlier, you get your standard marines, snipers, mecha units, and hero units. The marines are good to pump out in large quantities, but until I upgraded their attack power, they would easily get mowed down by Fell turrets as they were attempting to capture objectives. Snipers proved to have a little more personality, as they were able to take down a majority of the common Fell troops. Their only weakness was close combat, as they were easily overwhelmed if they weren’t supported by infantry or my hero unit.

The hero unit was an entirely different dynamic. The beginning of the game allows me to choose from a handful of heroes, leaving me to unlock the rest with credits as I progress. The one I decided to stick with was my best suited up marine named Taggins. His special abilities were a personal shield, special ammo, and an arsenal of wisecracking remarks as I kept clicking him. He was one of many heroes that I could unlock later. Some examples of the other heroes were a girl with a giant mech suit, a warrior with a type of laser sword, that also reminds players of a certain golden warrior race from StarCraft, and other types of mech heroes. I will hand it to the developers for injecting a colorful cast to choose from and giving each hero a unique take on the battlefield.

My mech units were fun to use, but their weakness was speed. Yes, they could torch a squad of Fell units in a matter of seconds, but as I kept clicking around to take down the next Fell command post, I realized without enough support, just like the snipers, they easily became overwhelmed. Striking a balance with what units you build makes the difference between failure and victory.

In addition to credits, the game unlocks certain achievements that are triggered randomly. While I was taking down the Fell horde with my troops, if I managed to destroy X amount of enemies, a random tracker bar popped up in the top right corner. Bonus objectives were anything from destroying X amount of Fell enemies, preventing X amount of troops from dying, or even defending X amount of structures from blowing up. They were simple objectives, but the overall benefit of accomplishing these goals were acquiring more credits and seeing the fun homage to video game history. I consider these fun Easter Eggs the developers sneaked in as they are fans of other popular sci-fi franchises that were infused in Iron Marines.

The last thing Iron Marines incorporates was defense structures and support abilities. With the credits that I earned after every mission, I had the chance to buy air strikes, landmines, or even a shield power to support my troops taking down objectives. Not only could I buy these support powers, but I was also able to call down a turret or two for extra firepower. I loved this dynamic of being able to instantly send in more firepower for my troops, especially during critical moments that I needed another squad to take down a command post. 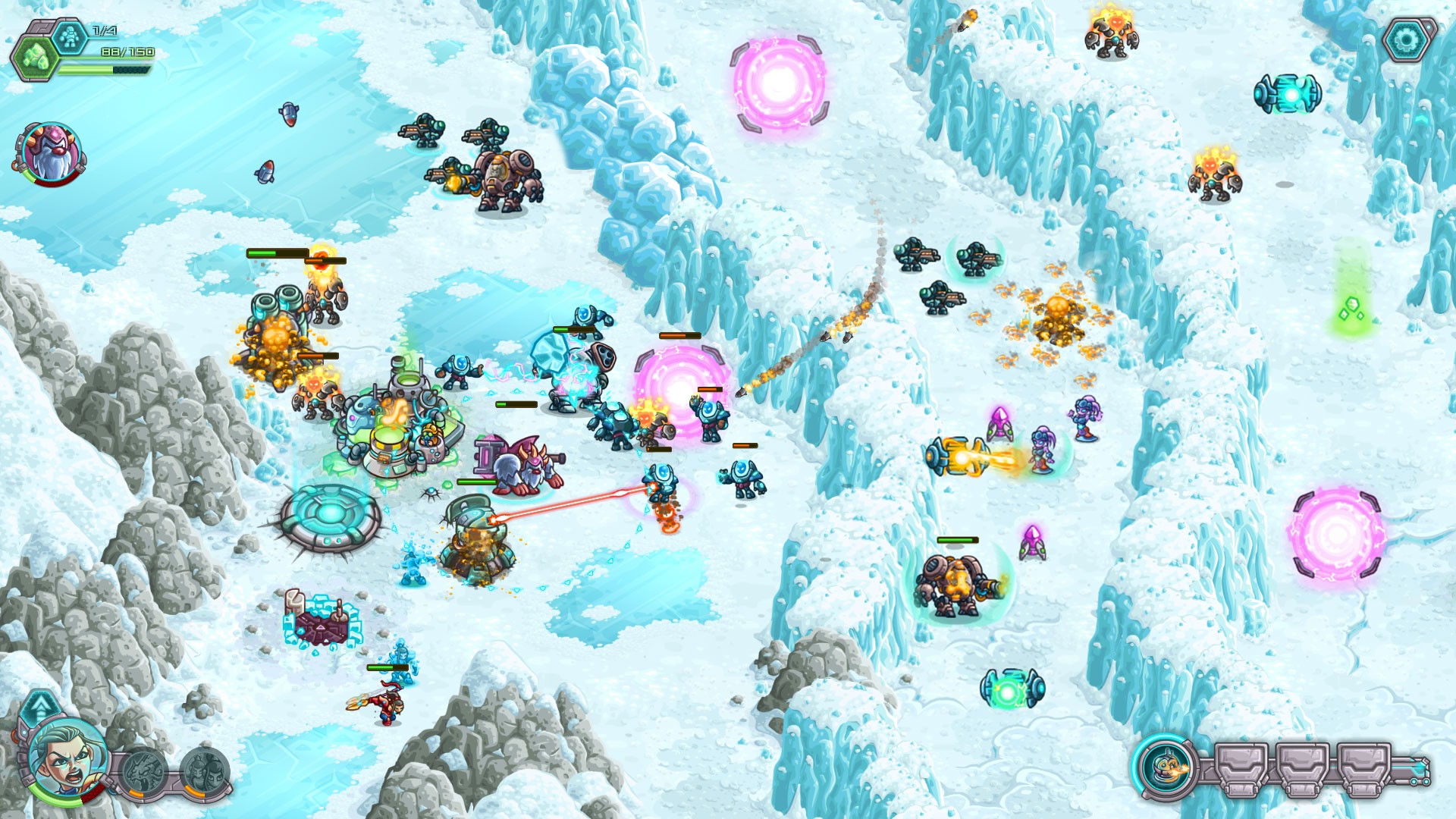 The importance of command posts is tied to gathering resources. Iron Marines played out as a relay, in the sense that you start with your basic outpost, build troops,and make a mad dash to take down the Fell outposts in the area. After I destroyed a Fell command post, I had a cool down meter pop up and I would be able to make another one. This added to my credits pool and also established a safe zone for my troops to rally at if I needed a staging area.

The strongest traits that made Iron Marines worth playing were the art style, sense of wackiness to each hero unit, and simple game play structure. The more research I did about the game, it made sense the developers structured it this way because it was originally a port from Android and iOS. In this case, I believe they did a good job adapting it to the PC, but the idea of micro transactions still reeks from its related ports in the form of accumulating credits.

The credits system is something I had to get used to, but it worked for this game. Because it started off as a mobile game, I wished the PC version of Iron Marines built off of this and made more ways to earn credits, other than finishing missions. If the developers get a chance to develop a sequel, I think it’d be interesting if they gave players the option to take on more bonus missions to gain more resources. Or even a mini game of a space fighter mode to take down aerial units, providing a safer region for your Iron Marines to deploy to.

Iron Marines have a lot of good ideas going for it. It is something that immediately caught my attention, but I want to see more polish in other expansions or sequels. I was overjoyed to have the option of taking on covert missions, but disappointed when it was reduced to simple defend missions. I also enjoyed the Easter eggs the developers stuck in the game, but fan service can only do so much for players. Each mission felt like a simple snatch and grab, or just a tower defense mini game, sending my troops to their fate to hopefully make it against the Fell. Time investment is key in this game as you have to keep playing to unlock everything that you want to use, including the wacky cast of heroes at your disposal. The skills tree was another strong trait of Iron Marines that made the difference in battle as I was fighting off the Fell horde at their outposts. I appreciated the time the developers took to make each ability unique.

Iron Marines makes a valiant attempt at bringing something different to the RTS genre, but it can’t quite forget its roots as a mobile game. If the developers were to create an expansion or sequel of Iron Marines, I would try to mix up the variety of missions instead of destroying X amount of structures and taking this. The story had a lot of potential to build on a wacky cast of characters, but I was disappointed to see the only difference among the bunch was their special abilities. If they had made mini story based missions for some of the characters, and tied them together with this cast, it would have made a compelling narrative to draw me more into the eternal conflict against the Fell.

I’d get this game if you want to entertain yourself for a couple of hours, but not at full price. Wait for a sale and see what you think of it.

Command your troops to planetary victory

A real-time strategy game that pays tribute to the classic sci-fi games of the past, but infuses humor into a wacky space adventure.