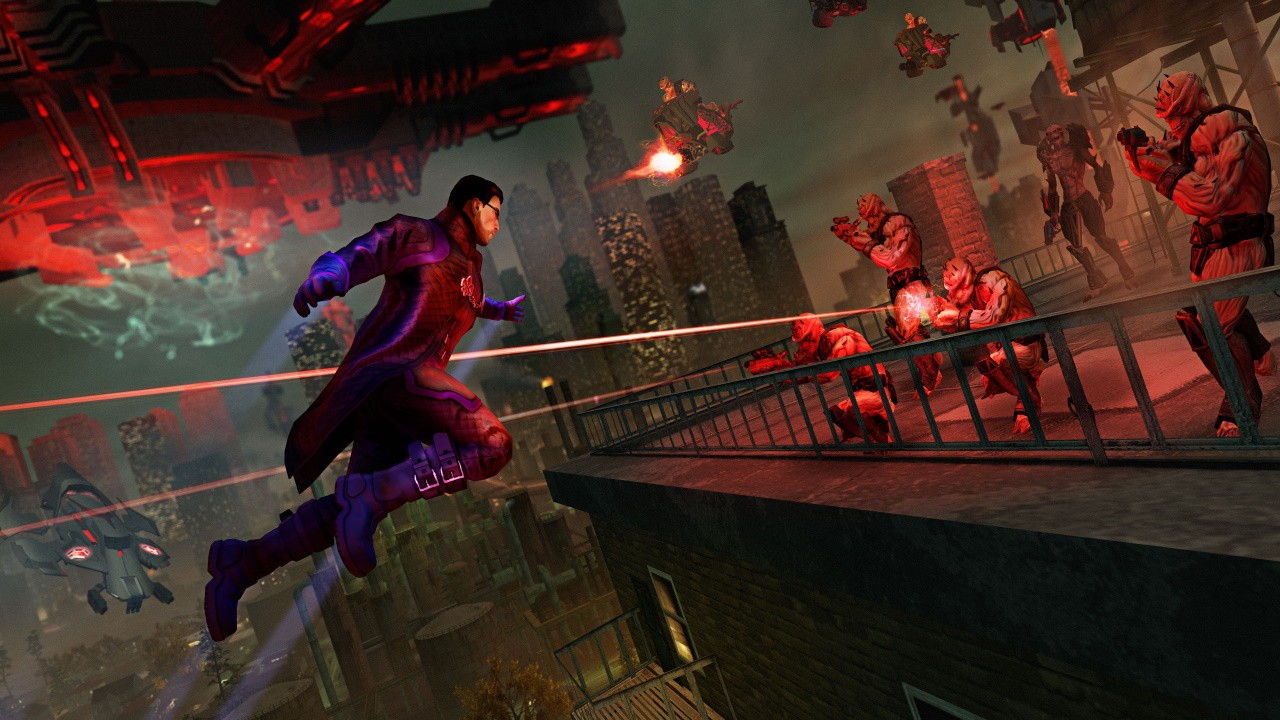 When it released on the Nintendo Switch last year, Saints Row: The Third provided a breath of fresh air for those gamers who had long awaited a GTA clone to appear on their beloved consoles. Whilst not perfect, it did enough to scratch an itch, but ultimately, for me anyway, its technical issues eventually got in the way of the gameplay; forcing me to leave the city of Steelport and quite a few challenges incomplete. Well now, Koch Media, Deep Silver and Volition have voted to release the next title within the series, as Saints Row IV: Re-Elected campaigns a release upon the Nintendo Switch.

Although following on from the previous ‘third’ title, it isn’t actually a necessity to have played any previous Saints Row games to appreciate this latest release; although admittedly, familiar players will find a little more to appreciate with a few cameos from some returning characters that were introduced in other titles. If you are unfamiliar with the series, then the Saints Row games have basically charted the meteoric rise of the Saints Row gang, from their lowly back-street beginnings to running for mayor of Steelport, the fictional city where the Saints are based, to now, as the Saints holding the seat within the White House and taking control of the Presidency of the United States; it’s here where this fourth game of the series begins.

With the Saints now in office, the story revolves around their biggest challenge yet; an alien invasion that has taken control of the whole planet. Led by their illustrious ruler, Zinyak, the invading forces of the Zin decimate the White House and systematically, go about destroying everyone inside. As the President and, more importantly, the hardened leader of the Saints, you begin a fight back. Impressed with your courage, but equally disgusted with your ability to fight back, Zinyak decides to make you his play-thing; transporting you into a virtual world that is modelled around the City of Steelport. However, thanks to the Saints’ hacking specialist, Kinzie, you manage to break free from the simulation of the virtual world and together, you transition between the real and virtual landscapes in order to disrupt the program and, ultimately, bring down the Zin Empire, stop the invasion and save Earth. 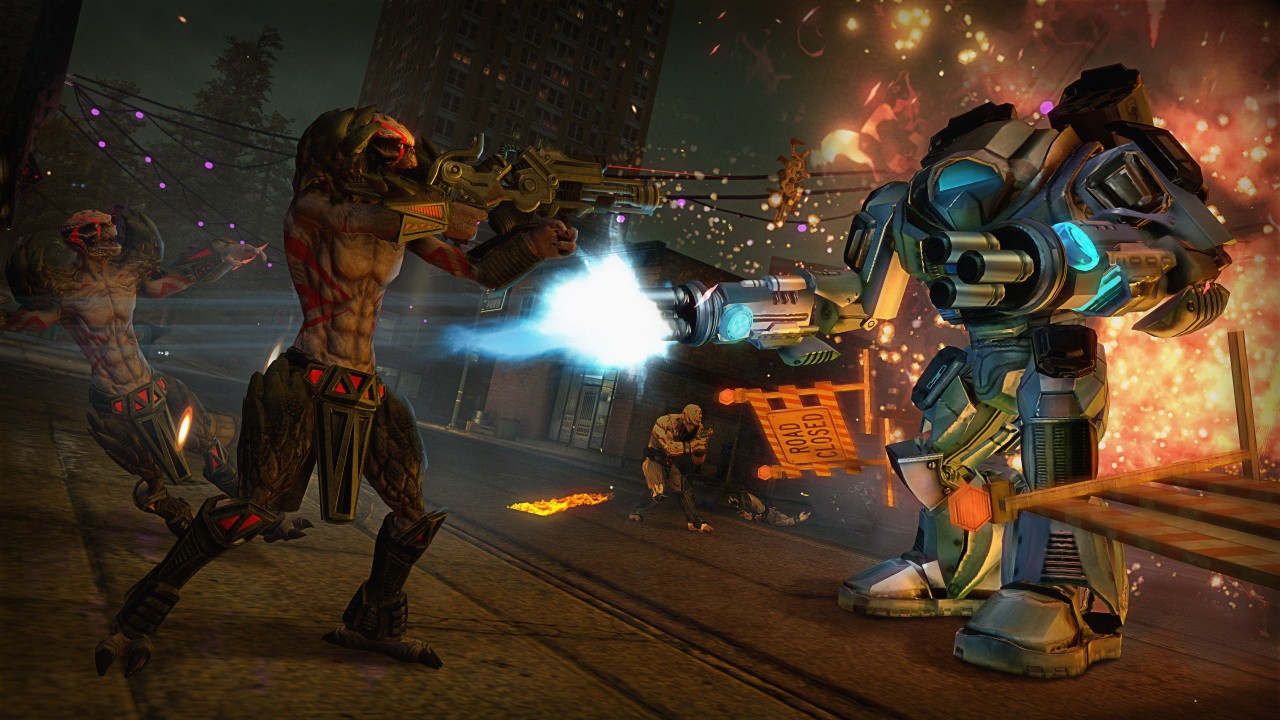 Whereby previous iterations of the Saints Row series have focused on producing a GTA style of play, Saints Row IV takes on a different approach. Although it still retains a level of GTA, this latest title also brings a parody that perfectly highlights the mad-cap humour that the series is more renowned for. This largely down to the ability to equip your central character with a host of ‘super-human’ powers that sees you running at lightning fast speeds, jumping higher than a skyscraper or firing bolts from your hands in order to create at as much mayhem as possible. In this respect, the game takes on a very Matrix style feel; producing a title that plays like a cross between Grand Theft Auto and Prototype.

Where the game really excels though, is in its ability to produce as much fun as is humanly possible. It’s a game that has its tongue firmly in its cheek, with its over-the-top presentation in everything that it tries to do. Within my first hour, I was clinging to the side of a launching nuclear missile whilst Aerosmith’s I don’t wanna miss a thing played its rousing chorus, before entering the realms of surrealism as I piloted an alien space craft through the belly of a mothership UFO to the beats of Haddaway’s What is Love? Both these impressive set-pieces have easily become the most surreal and mad-cap experiences I have ever had playing video games.

It doesn’t stop there either, with a whole host of campaign missions, side quests and challenges to truly challenge your sanity, as well as a crazy variety of customisations and weapons that make people dance. It’s so over-the-top that you simply can’t help but have a pure, adrenaline-rushed level of fun with the game. One thing I must point out though, is that the content of his game is heavily adult-orientated; making this a title that is most definitely not suitable for younger audiences. Not just in violence or destruction, but also in a very sexual way; some of which is laugh-out-loud hilarious in its execution. 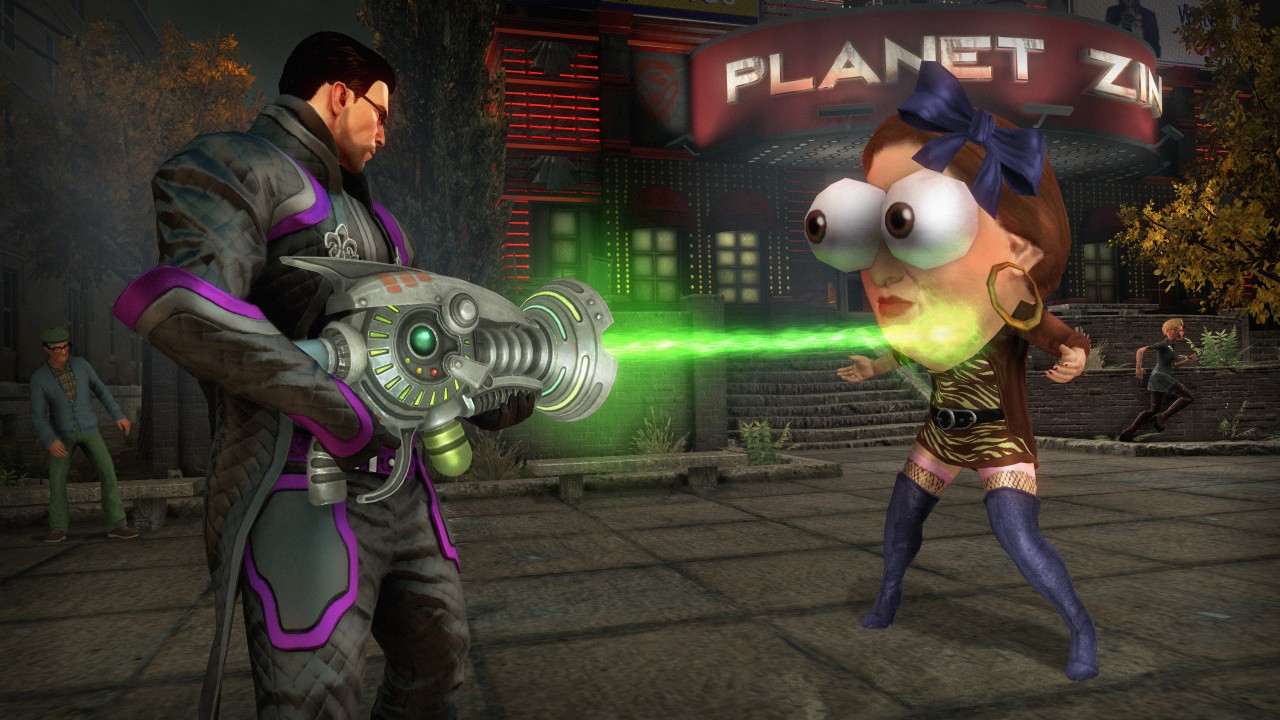 The open-world playground of Steelport is a veritable delight as you run amok within its neon districts, sleepy suburbs and Industrial landscapes. However, with the majority of the game being set within a simulation, the settings largely take place at night, making this quite a dark game with its aesthetical presentations on-screen; particularly so on the Switch’s handheld screen. It’s never indistinguishable though and some districts of Steelport are bright and colourful, but for the most part, the general palette of the cityscapes are largely set within a darkened tone. However, this in no-way makes the game any less playable or enjoyable.

What is worth mentioning though, is the fact that Saints Row IV runs significantly smoother that what Sants Row: The Third did. Frame-rates, button inputs and general controls run much more smoothly, making the game much more enjoyable to play this time around and making many of the challenges a less frustrating experience. In fact, due to the overpowering of some of the game’s super-human abilities, this is a significantly easier ride than the third game and one that is all the more enjoyable for it too. As well as technical improvements, this fourth edition of the series also comes bundled with all previously released DLC, including Enter The Dominatrix and How The Saints Saved Christmas, as well as a host of attires and vehicles. Sadly though, A Gat out of Hell is not included. As with the third game, Re-Elected also comes with motion controls and co-op play for two-player local mayhem.

Overall, Saints Row IV: Re-Elected is a veritable feast of fun and mayhem that sits perfectly on the Nintendo Switch. Whether you play docked or undocked, the game runs super smoothly and its level of control produces a more accurate feel to the gunplay and driving mechanics; making this a more superior game to the last Saints offering on the Switch. With a wealth of content, not just within the base game, but with over 25 items of DLC, co-op play and a fantastic level of real fun and humour, Saints Row IV: Re-Elected is a game that most definitely gets my vote.

Saints Row IV: Re-Elected on the Nintendo Switch certainly gets my vote!