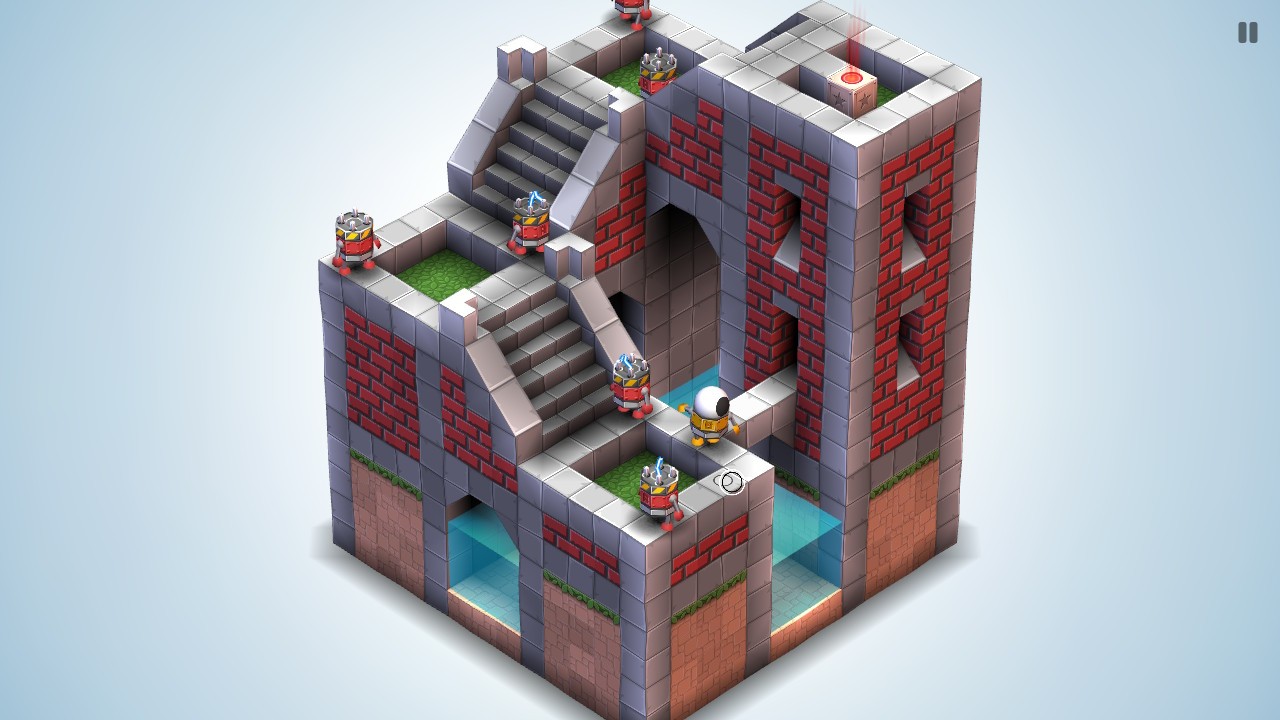 Mekorama has been around for a while. Martin Magni’s 3D puzzle platformer was originally released on mobile back in March 2016, receiving critical acclaim as well as the Jury’s Honorable Mention at the 2017 International Mobile Gaming Awards. Four years later and it’s back and rebooted for the Switch, PS4 and Xbox One.

You take control of Robot ‘B’ who has crash landed on a strange cubic planet full of obstacles puzzles and other creatures – by manipulating the environment you must guide him to the finishing square and safety. In your way are obstacles such as lifts, water, revolving platforms and even other robots that you must use your knowledge to navigate past and solve. There’s over one hundred different levels for you to try, and you have to complete earlier ones before you can move on to those which are more difficult. 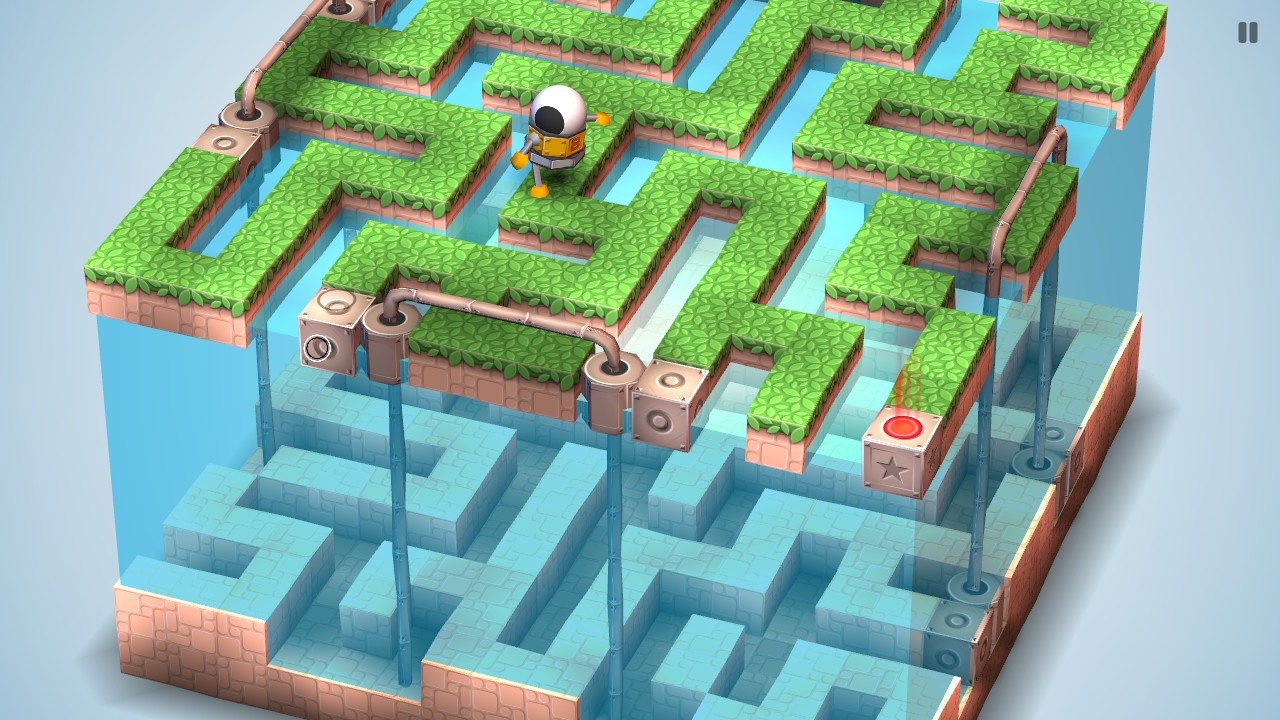 It’s obvious this is a rebooted mobile game from the start. The cartoony graphics work well on a small screen, plus the standardised and subtle background music and sound effects don’t add to the game – allowing you to play without sound if you need, but also to focus on the gameplay and puzzle at hand if you don’t. Whatever you choose, it’s always nice to have a choice in how we like to play.

I played this game on the Switch and, despite having perfectly adequate alternatives in the form of the Switch buttons and sticks, it was a lot easier to use and more intuitive using the touch screen. It would be nice to be told the control scheme at the start, as it led to a confusing level or two before I realised touch controls were an option. But at certain points it was nice not being explicitly instructed as to what you needed to do. When you were introduced to a new character or new game mechanic, for example, it really put you in ‘B’s’ shoes – being in the dark and having to figure out exactly what it was, how to control them, and what you needed to do to get past it. 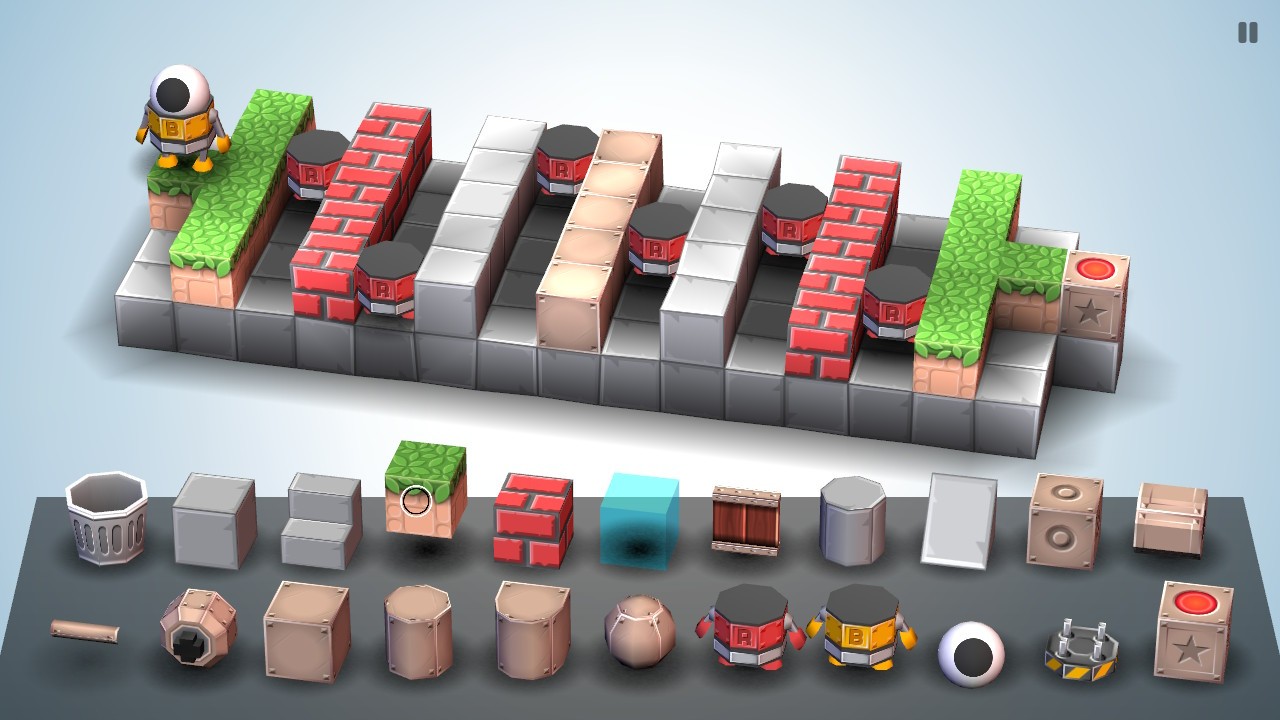 And this added to the difficulty, especially in the ‘Easy’ levels. Despite starting off a little too easy, having to learn the game for yourself helped to create a natural difficulty curve, despite the levels being sorted into distinct categories (Easy, Medium, Tricky and Hard). Even if you can solve the puzzle easily, the realistic physics add to the difficulty: you can’t move ‘B’ too fast, for example, or he’ll fall off the platform he’s standing on and require you to start the level all over again. And if you do find yourself struggling, a hint system has been introduced that helps you get past these difficulties if you need – it’s not an option overtly put out there to assist you, but it’s there if you really need it.

You wouldn’t go back and replay these levels again as there’s only one way you can complete each one, but there’s plenty there already to keep you going as it is. The addition of the level creator is a really nice idea, but could’ve been pulled off better. Whilst you’ve got everything you need to create an infinite number of different levels, it’s hard to pull off with no grid or snapping feature that would allow you to see where your piece would go before you place it. Plus it would be nice to share and view community levels, à la Super Mario Creator. For a game that’s only £5, you feel like you get your moneys worth, but it’s clear this is still a mobile game at heart.

Sticking close to its mobile roots on its console remaster, Mekorama remains an entertaining and challenging play.