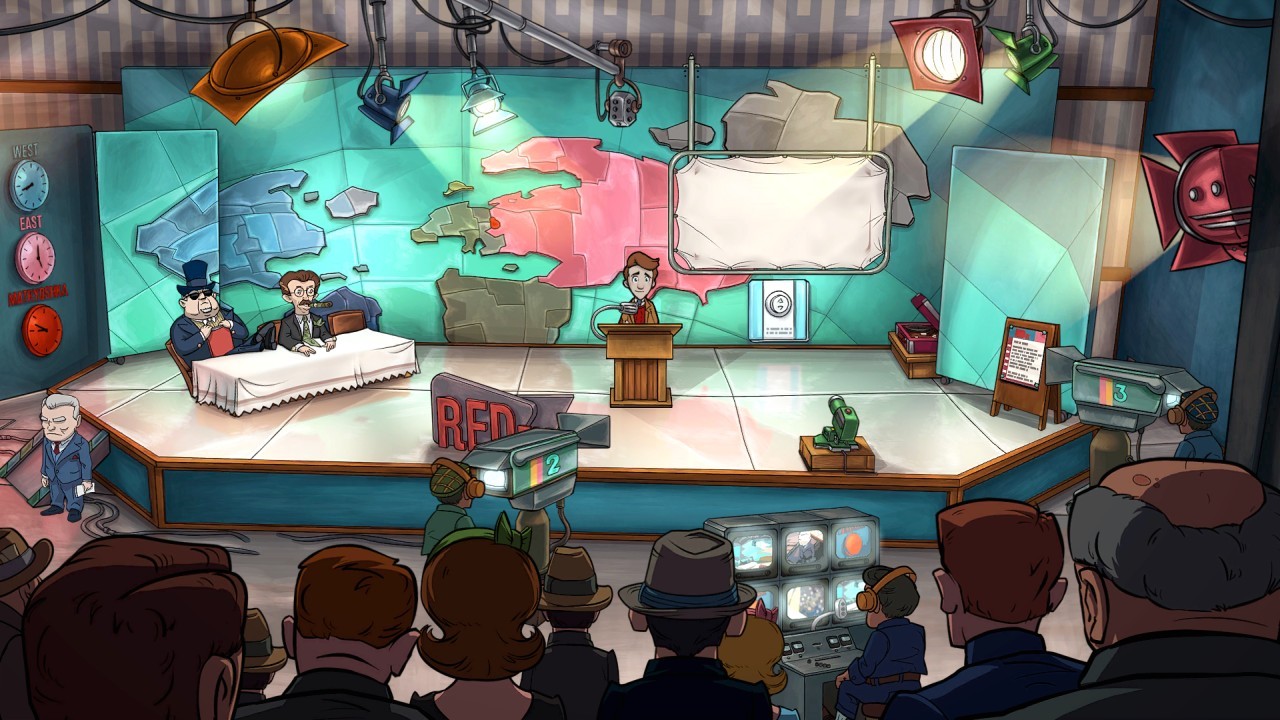 It’s like 10,000 spoons when all you need is a young pro-communist magazine editor to go on American television to praise the leader of Matryoshka and a potential asset for changing the ways of the bourgeoisie capitalist pigs of the West. Isn’t it ironic? Don’t you think? Anyway, enough with the Alanis Morissette reference, let’s have a look at Irony Curtain: From Matryoshka With Love.

This one initially gave me the slip, and it wasn’t until my quest of finding a decent point and click adventure that Irony Curtain: From Matryoshka With Love poked out its communist head, waving the flag saying “pick me, pick me!”. Note that all political references to communism and capitalism is the nature of the title and not a cheeky way to insert my stance on politics. I’m a little indifferent to it all, so you could say that the theme would be a tiresome bore; far from it.

Irony Curtain: From Matryoshka With Love begins with the hero of the title, Evan Kovolsky, an American journalist, escaping from what appears to be a coup of the in-power communist party. Rather than make a stand, he makes a clear run for it to escape from the inevitable doom. However, after a brief introduction to the format, i.e. find some items, combine them and solve a puzzle, we get a flashback to why he was in this predicament in the first place.

It begins with the backdrop of World War II as the first bit of exposition. The year is 1946, and Ivan appears on a live television broadcast in the United States to promote the values of communism, using the fictitious state of Matryoshka as a model for its ideals. He is met with friction – nobody willing to listen, other than an undercover agent under the instructions of ‘The Leader’, to bring him back. Cue fish out of water, point and click adventure. 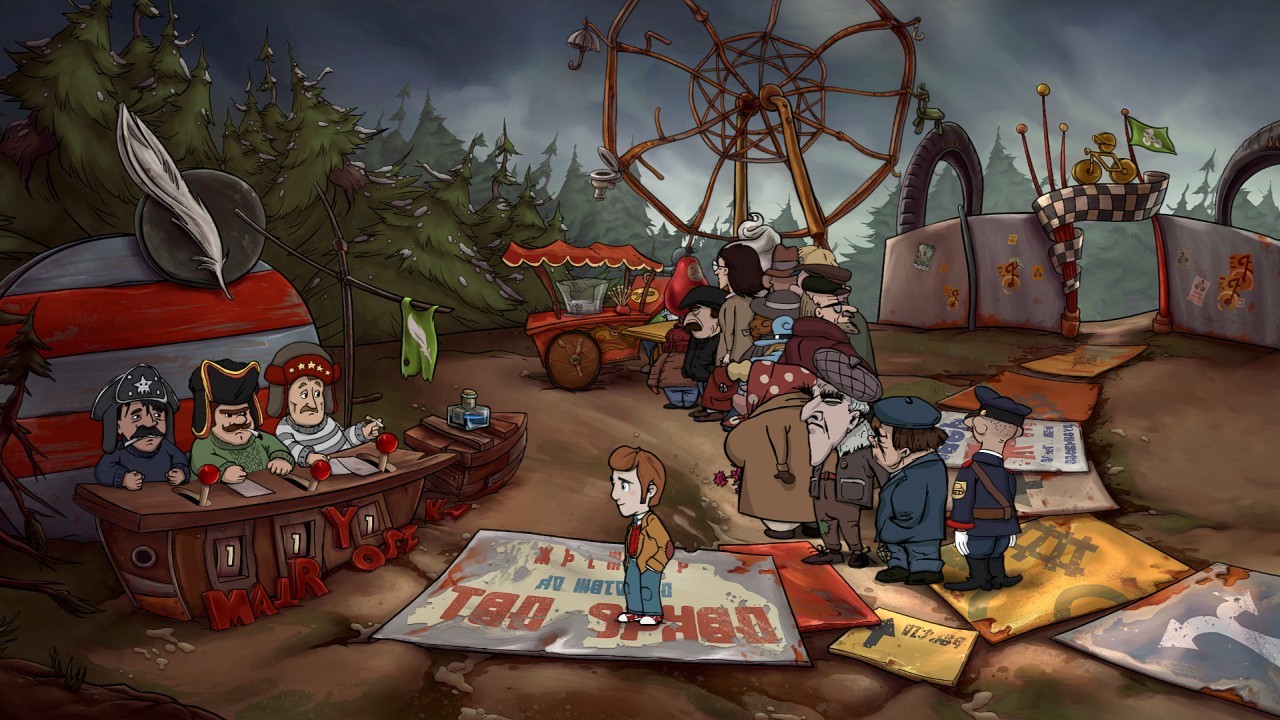 Visually, Irony Curtain: From Matryoshka With Love is on par with the new wave of adventure games. Clearly influenced by the LucasArts and Sierra games before it, having a hand-drawn character style that is more common in animations you’re likely to see in webzines or YouTube intros. I didn’t warm to the main character design at first, or the cutscenes, but the moment I got stuck in, I was in familiar territory.

You use an on-screen cursor to interact with objects and people in each setting, and much like the newer titles, you can hold ZR to highlight everything that can be interacted with. Despite this little mechanic, it doesn’t mean you can still solve the puzzles immediately – I got stuck on the most inane of problems and felt like I let the adventure community down through my lack of ‘not trying everything’. To make a comparison to similar, newer titles, Irony Curtain: From Matryoshka With Love reminds me of The Wardrobe: Enhanced Edition as there is a wealth of responses when speaking to other characters or the dialogue you will get when combining items that don’t work.

As mentioned, for me, Evan didn’t seem likeable, and I wasn’t a fan of the voice talent at first. That thought process was scrapped entirely when I got stuck in as when it comes to actual gameplay and voice acting, it’s fantastic. The dialogue options are as witty as you could expect from a title like The Secret of Monkey Island, and the responses from the NPCs when you choose each one differs each time. Interaction between these characters means something, and I felt like I was playing a title from yesteryear.

In terms of the plot and theme, it seems quite heavy, and the kind of conversation I wasn’t part of in the refectory at university; preferring an ignorance is bliss way of life. However, the dialogue is well written, and while I’m not likely to take a stance and become a socialist, the areas covered are quite informative, but never feel like a bore. There was the right balance of what to tell, and each time it started feeling like an orange box moment; a bit of humour was injected that made everything feel quite pleasant once more. 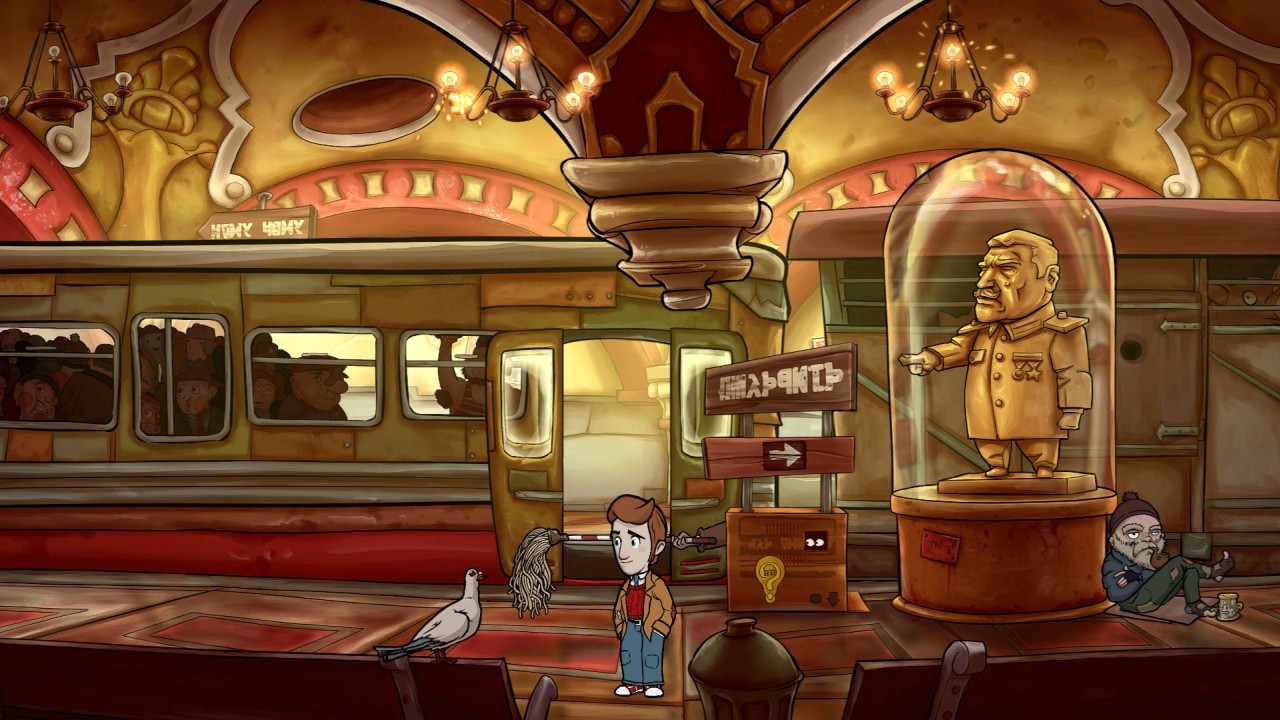 When it comes to the actual puzzles and gameplay, I would argue that it’s spot on. Should a puzzle have you phased for longer than you would hope, there is a hint system scattered throughout that does precisely that; hint, not hand the answer on a plate. Sometimes with these point and clicks, the solution is so obvious, but you explore all the other options that you begin to overlook an action that is clear as day. The opening scene was particularly rewarding as there’s a phone where you can call for hints. It was very reminiscent of classics like Leisure Suit Larry or again, The Secret of Monkey Island, where there’s an in-game self-awareness that doesn’t take itself too seriously, considering the nature of the game.

My only real criticisms of the game would be that, even with the hint system, some of the puzzles are a little tricky. There will be moments of backtracking, doing the classic ‘inspect everything, combine all objects in your inventory and repeat dialogue in the hope that something will connect. It certainly isn’t game-breaking, and anyone accustomed to the genre will be in familiar territory and in some light, adds to the fun.

While the characters are quirky and there are some brilliantly designed scenarios, I wasn’t too keen on the animation, and it reminded me of the old Flash enable games when the internet was in its infancy. Evan also does plod along quite slowly at times, and while you don’t expect to be playing this sort of game with a stopwatch in hand, it does drag if you’re on a fetch-like quest.

Irony Curtain: From Matryoshka With Love is a must for any point and click adventure fan. With a strong political undercurrent, the game doesn’t alienate its audience by being overly complicated, nor dumbing it down to appeal to the masses. Of course, humour plays an important role. Still, even the gameplay mechanics of highlighting an object and having the classic ‘verb wheel’, identified with an animated icon such as an eyeball, speech bubble or moving cogs, makes Irony Curtain: From Matryoshka With Love very accessible to console gamers without the luxury of a mouse.

Another must-have point and click adventure for the Switch if you’re a fan of the genre. The controls are tight, the dialogue is witty, and the feel of the game is on par with top-titles in the same category.