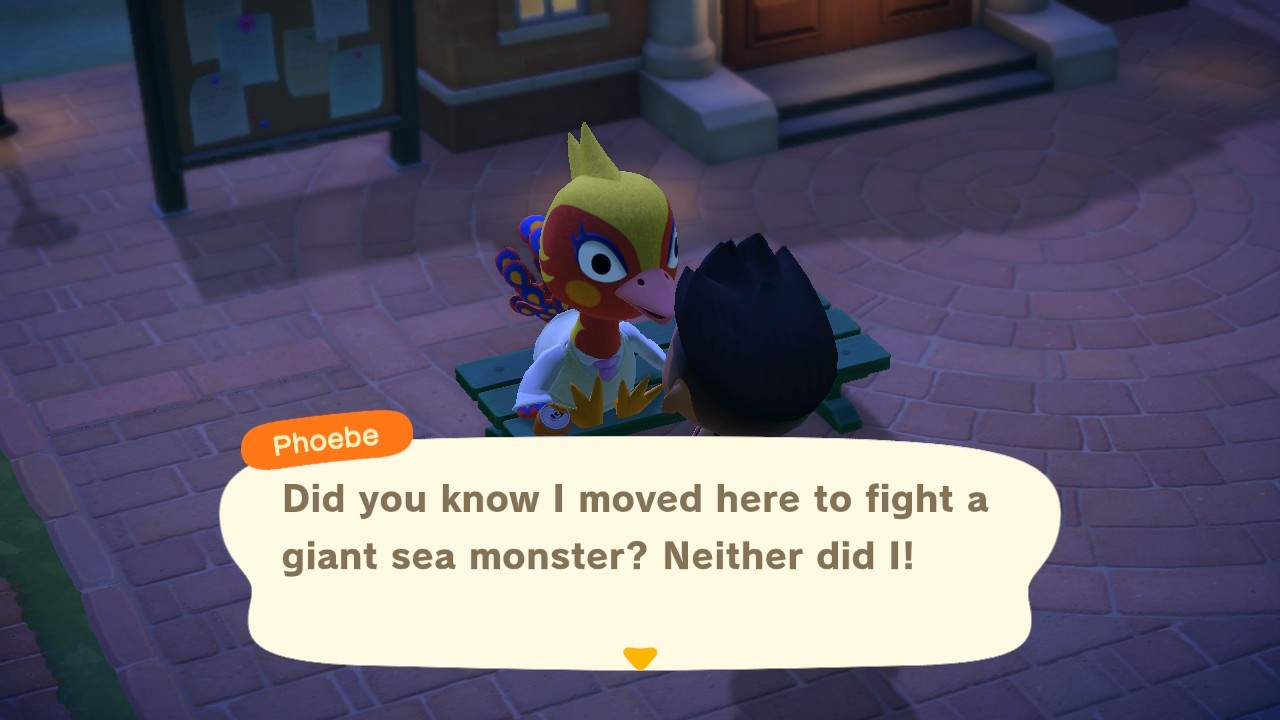 When Animal Crossing: New Horizons was nearing release, I checked to see how long it had been since the last major release from the series. Even though I’ve played all of the games that were released outside of Japan, spin-offs included, I definitely did not remember that New Leaf released back in 2013. The world has been waiting 7 years for a new mainline Animal Crossing game. Thankfully, New Horizons is a very solid entry in the franchise, even if there are a few stumbling blocks.

The game begins a little differently than most games in the series. Instead of arriving at a new town that is all or mostly developed, you arrive on a desert island and effectively have to build everything you’re used to starting with, from scratch. New Horizons, like the games before it, uses a real time system. Meaning certain characters show up and specific events occur at real-time intervals. One huge downfall of this game is that this system applies to the development of your island as well. Meaning, to get many of the amenities you would have started the game with all the way back in 2001 on the Gamecube, you’re going to have to wait days, if not weeks. I don’t know why the game does this. It makes it feel like it’s a free to play mobile game that is trying to milk me for microtransactions by making me wait 24 hours for everything. The real time system was not a problem in this way until New Leaf and after dealing with it there, I refused to do it again and fast forwarded through the first two weeks of New Horizons by messing with the Switch’s clock, before operating under real time from then on. Having done that, I can still tell you that I’m booting up the game as soon as I get up each day to check on what’s new because despite having sped through getting all the basics, I found there was still plenty to do and look forward to. I don’t feel like it benefits the game to try and drag out its content this way, but this is a pretty subjective matter and everyone will feel differently.

As for what you’ll be doing from day to day, you’ll be participating in various activities such as fishing and catching bugs, likely in order to pay off either your mortgage, or later on in the game, island improvements. Of course, as the name would imply, spending time with your animal neighbors is also a key aspect of the game, and in some ways your interactions with them have been improved, and it some ways, the original Gamecube game still did it best. After spending enough time with your villagers you gain the ability to just give them gifts without having to send the gift through the mail. I love this feature so much because you will often find that you’re acquiring items that don’t fit your house or clothes that don’t match your style. You could always sell them, but there was rarely profit to be made in that and the same holds true for this game. But if you give your unwanted item to a villager, they will often reciprocate by giving you an item you didn’t have and maybe you like better than what you gave them. Sometimes they will just give you money for the item though, but even then they’ll likely buy it for more than you could have sold it for. They will also occasionally have some kind of task you can complete for them in exchange for items, but just like every game that followed the original Gamecube game, you cannot go up to them and directly ask them if there is something they want done. They have to bring it up when you talk to them, which I found was happening pretty rarely comparative to other games. Then, just randomly giving you stuff for free though was a much more common occurrence than I recall. The animals also interact with the world more than they did before. They’ll go fishing, pull out a sandwich to eat, sit under a tree, play with the furniture pieces you’ve put outside (yes, furniture can go outside now), switch into athletic gear to exercise, etc.

I also personally think that the writing, or perhaps the localization, is much better this time around. A lot of the dialogue is genuinely funny and there are quite a few moments I’ve screenshot what the animals have said and sent it to friends. As far as I can tell though, the “rude” personality types have still be far toned down from the way the were in the Gamecube game. I never got a “cranky” villager on my island, but I did get a “snooty” one and she seemed just more high brow and elegant than she did critical or rude. I actually quite like her personality, but it’s still a far cry from the way they were originally, so anyone hoping some of their animals would make fun of them again, are going to be disappointed. 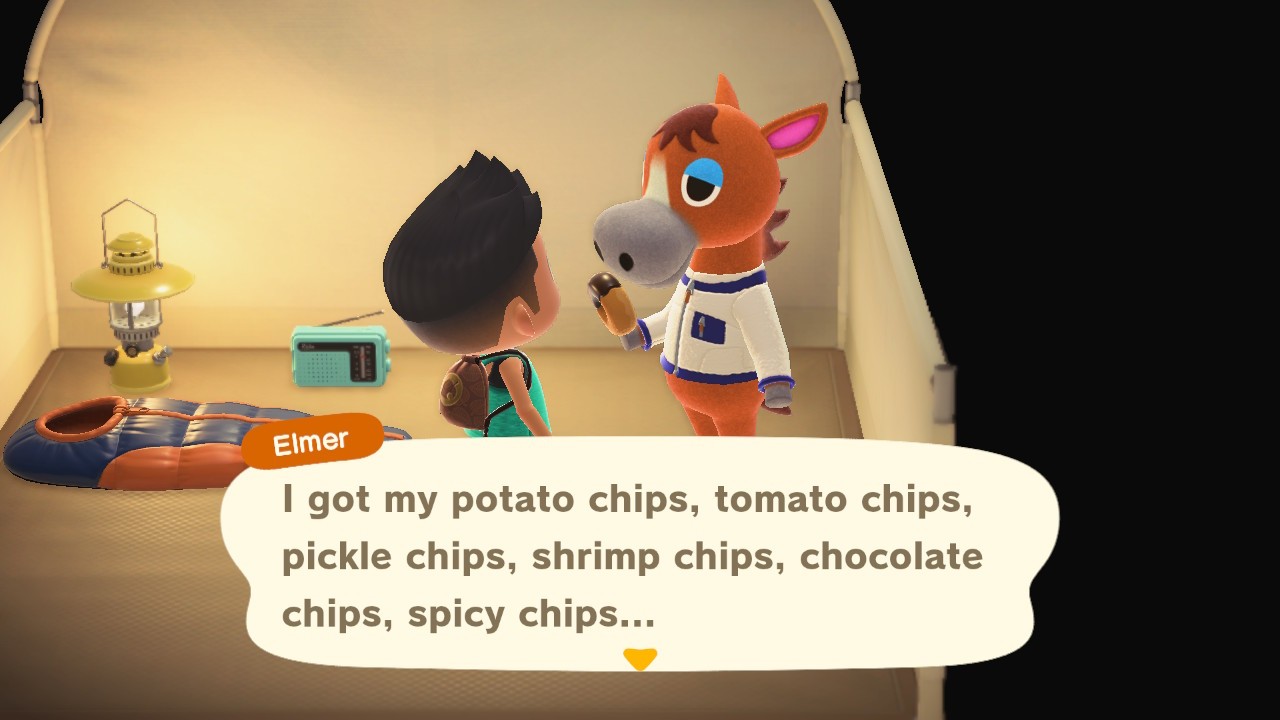 One of the major new additions to the series in New Horizons is crafting. Trees now produce lumber, rocks now produce stone, clay, and ore, etc. With these materials you can craft a variety of items, including furniture, flooring, wallpaper, rugs, clothes, tools, and pretty much anything else you can think of, provided you know the crafting recipe. Crafting recipes aren’t too scarce, though I would say they’re scarcer than I’d like them to be simply because a lot of the methods for getting them result in you getting one you already have. If you were guaranteed a new one each time, then it wouldn’t be as big of an issue. For example, when you have a villager hanging out at your campsite, they will ask you to make something for them. If you don’t know how to make the item, they will teach you. I had two visitors in a row ask for the same thing…which was a sofa made out of cardboard boxes. Not something I really wanted to know how to make anyway, let alone twice. Unfortunately the introduction of crafting has two other detriments. The first being that you now have to craft your own tools, which wouldn’t be a big deal, but now they break. Which is slightly annoying, but not that big of a deal since they’re fairly easy to craft, but even once you get upgraded versions, they still break way too frequently. Gold versions of tools return, but for some of the tools, it would take a literal year to get the gold versions. I’m a little over 20 in-game days in and I’ve yet to even come close to getting any.

The second problem with the crafting system is that because the game expects you to craft most of your own furniture, the shop almost never sells anything good. All the furniture pieces they sell are basically knick knacks because they expect you to craft the beds, sofas, etc. This renders the fun of checking the shop each day to see what’s new kind of moot. I’m not sure why they don’t sell crafting recipes beyond a certain key basics, if they wanted to keep the crafting mechanic the focus.

One shop I do look forward to every day though is the tailors. The clothing system in this game is vastly improved from New Leaf. I probably spend more money on clothes than anything else save mortgages and island infrastructure. Pieces now come in multiple different colors and you can go into a changing room to see all the options and select multiple pieces to view and purchase at once. It’s a great system. Then once at home, you can open up a dresser or similar furniture item to see all the clothing you’ve put in storage in a much more user friendly UI than New Leaf and directly change into that menu. There also exists an item later that lets you store several outfits in to change into within seconds. I feel like I cannot overstate how well done the clothing designs and clothing systems are this time around. If only the clothing shop wasn’t locked behind literal days of progress. 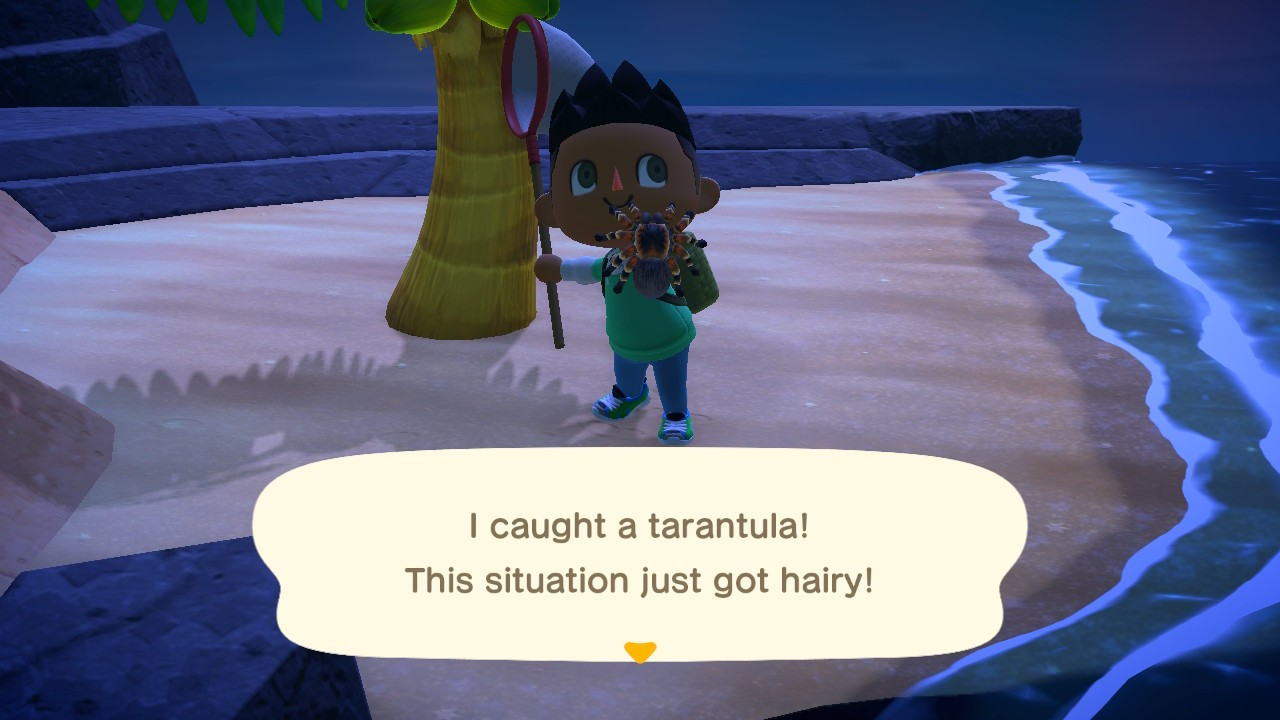 One more major thing I feel I must touch on, is the Nook Miles system. Nook Miles are basically an in-game achievement system that allows you get to get rewards points for completing certain activities such as catching a certain amount of fish in a row without losing one, or for planting new types of fruit trees. These points can be spent on various rewards such as increased inventory space or new hairstyles. They can also be spent on tickets that allow you to fly to a random island. These islands can have some very unique properties such as an infamous one that spawns a large number of tarantulas, or one with uniquely colored flowers populating it. You’ll also find islands that are pretty normal though and sometimes just getting the extra crafting resources from them can feel like a bit of a waste of Nook Miles, but you’ll always walk away from the island with something, even if it’s not particularly noteworthy. You can also be rewarded for completing small, rotating, repeatable tasks and these specifically will give you a bit more focus with regards to how to spend you time on the island. Though my Switch library is quickly filling up with pointless pictures taken just to fulfil the “take a photo” requirement to earn points.

It’s been wonderful to return to a mainline Animal Crossing game and create new plans for a brand new house and a brand new place to live. The crafting system adds some additional layers even if aspects of it can sometimes detract from the experience, and there’s so many wonderful quality of life changes like the wardrobe system. It’s also unfortunate that many special NPCs have been cut out, either because a quality of life change has rendered them unneeded or they awaiting introduction via patch, but the nitpicks don’t really seem to matter much in a world this fun to be in.

The nitpicks don’t really seem to matter much in a world this fun to be in.