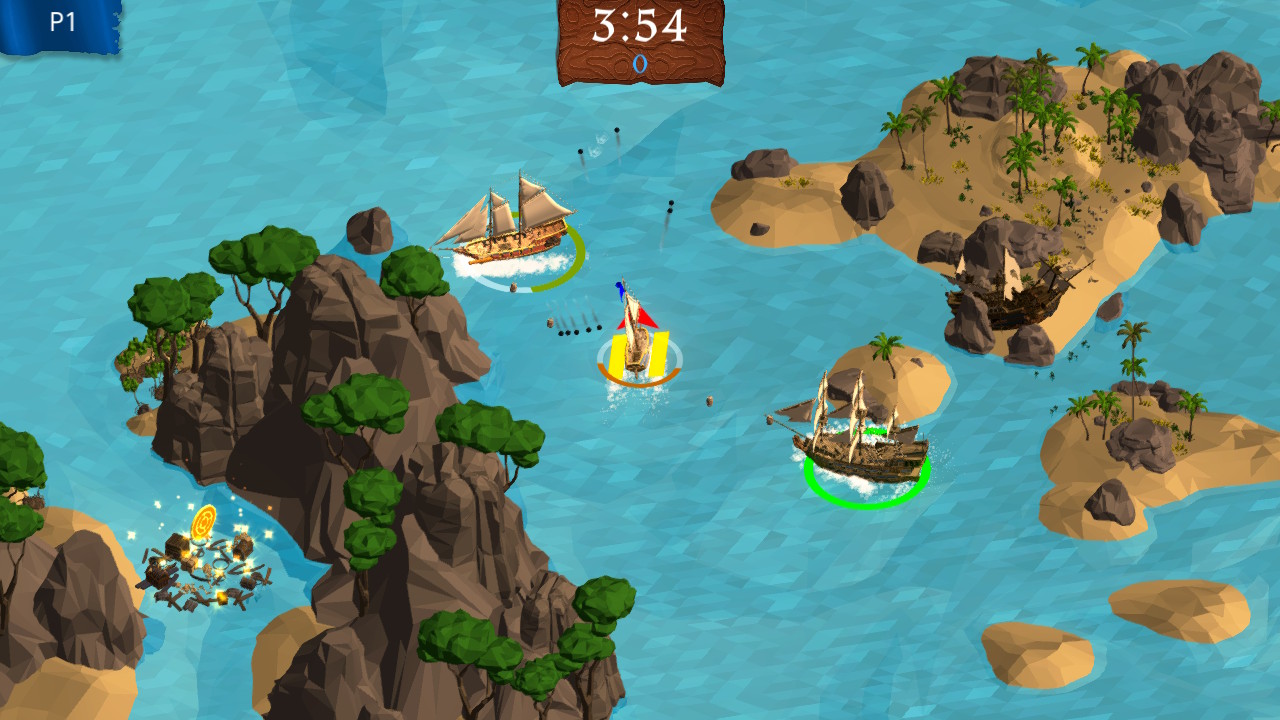 Aargh! Me Hearties! It’s time to raise the mainsail as Pirates: All Aboard! plots a course to land upon the shores of the Nintendo Switch. Published and developed by QubicGames, this bundle of booty brings a bite-sized treasure trove of game modes with its madcap pirating adventure. Boasting both single and local multiplayer elements, Pirates: All Aboard! is a game that tasks you with dominating the seas to become the most feared of all the pirates. With three modes of play, as well as a sprinkling of options, there should be plenty of pieces of eight to keep even the most seafaring sailors at bay with its casual playstyle, especially when battling against family and friends.

The first port of call sees you sailing through a practice mode. It offers an insight into the game’s main style of play; albeit in a rather limited form. From a selection of three ships, each one carrying different abilities in health, mobility and firepower, you embark on a journey around a series of islands as you seek out the other AI pirates in a deathmatch-style of gameplay over five minute rounds. Using the left thumb-stick, you steer your way around a rather limited arena, whilst speed is controlled with button inputs; depending on how you use the joy-con determines the configuration for this. The objective is to sink the other ships that patrol the same seas as you. Using both the L & R shoulder buttons to fire your cannons, each one mapped to your port and starboard sides, you battle to deplete the health of other ships until they duly sink to depths of the ocean floor. However, you also need to avoid enemy gunfire, as well as steer clear of rock formations and islands in order to avoid any damage to your own vessel. 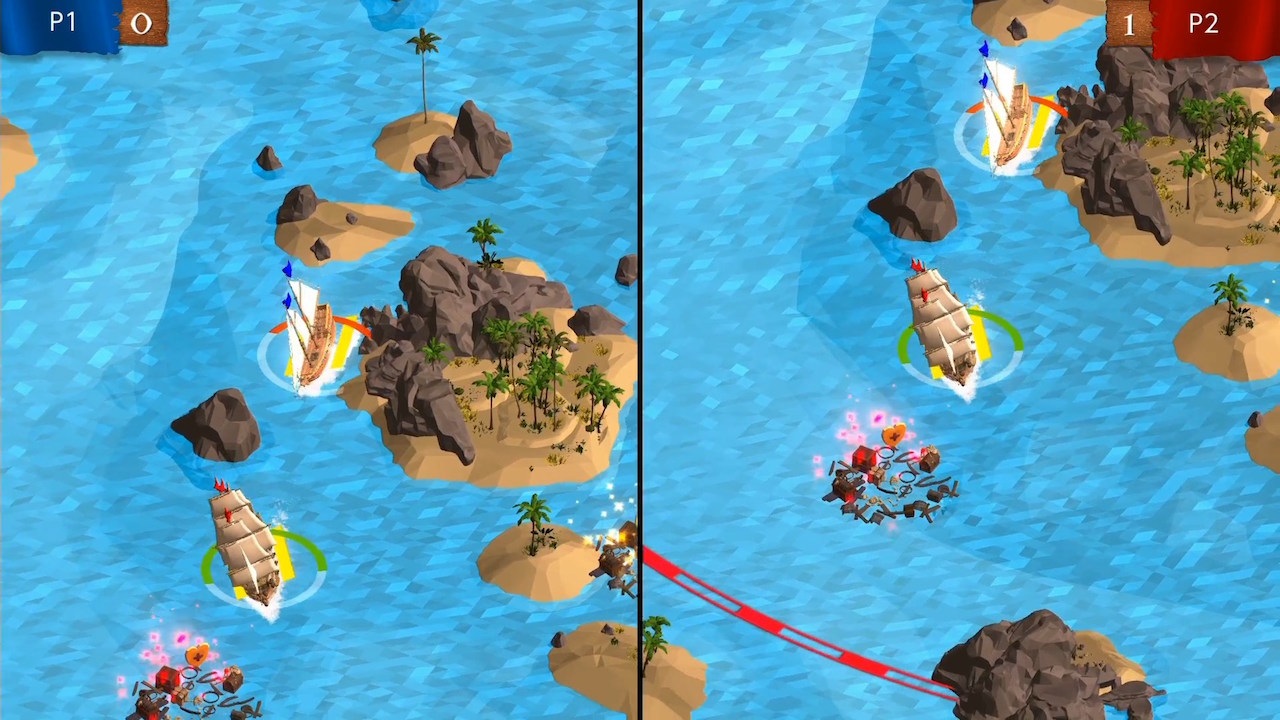 Scattered around the seas, lay a series of power-ups to enhance your pirating abilities, which includes battering rams, increased speed and manoeuvrability, extra firepower, as well as many others. While some of the effects of these upgrades can feel largely redundant, other varieties can bring a real sense of superiority. It’s up to you to find which abilities best suit your style of play. However, with some upgrades comes further hazards, such as increased speed which produces a wider arc of turning; something that needs to be considered when traversing around the islands. Primarily a single-player practice round for the game’s multiplayer element, this mode can provide some limited entertainment, but its shortfalls soon make for an experience that will leave you feeling beached, rather than supreme. Sinking other vessels rewards you with a point, however, get sunk yourself and the game ends; taking away any sense of competition or gameplay. This mode also plays on one map, despite the multiplayer element containing six varieties; a strange decision that severely limits and hampers the element of fun for solo players.

The second game mode has you anchoring up at another single player offering: Endless Mode. Essentially a non-stop runner style of game, this mode sees you steering a lone ship as you traverse through a course littered with rock formations, cannon-fire and man-eating sharks to name but a few. With its ever-increasing speed, it is your job to steer your way through the obstacles, collecting treasure coins along your way. With its insta-death mechanic, one brush of the terrain sends you to a watery grave and overall score. Its gameplay elements produce a short, sharp shock; creating a mode that is ideally suited in a casual capacity to help pass a short passage of time. Without any depth, it’s rather a short-lived experience, although it can offer some fun but, again, in a rather limited form.

The main bulk of Pirates: All Aboard’s gameplay comes in the form of its multiplayer options. Following the same premise as the practice game, this mode pits you and up to three friends, via a split-screen, in the same style of gameplay as previously mentioned. Again, with a choice of three varying ships, you battle it out over a variety of game maps in two differing modes: Deathmatch or Last-man standing. The first option of play follows the same rules as the single-player’s practice mode; set over a round of five minutes, the pirate that sinks the most ships, thus obtaining the highest score, wins the round. Last-man standing, however, produces a knock-out round where tasting defeat sees you sitting out from the rest of the game until one pirate remains victorious. Whatever mode of multiplayer you choose, the basic premise of traversing around rock-formations and islands, as well as picking up a variety of power-ups, remains the same as the practice round. However, with a variety of game maps and human opponents, this game mode offers the most enjoyment and longevity in its execution. 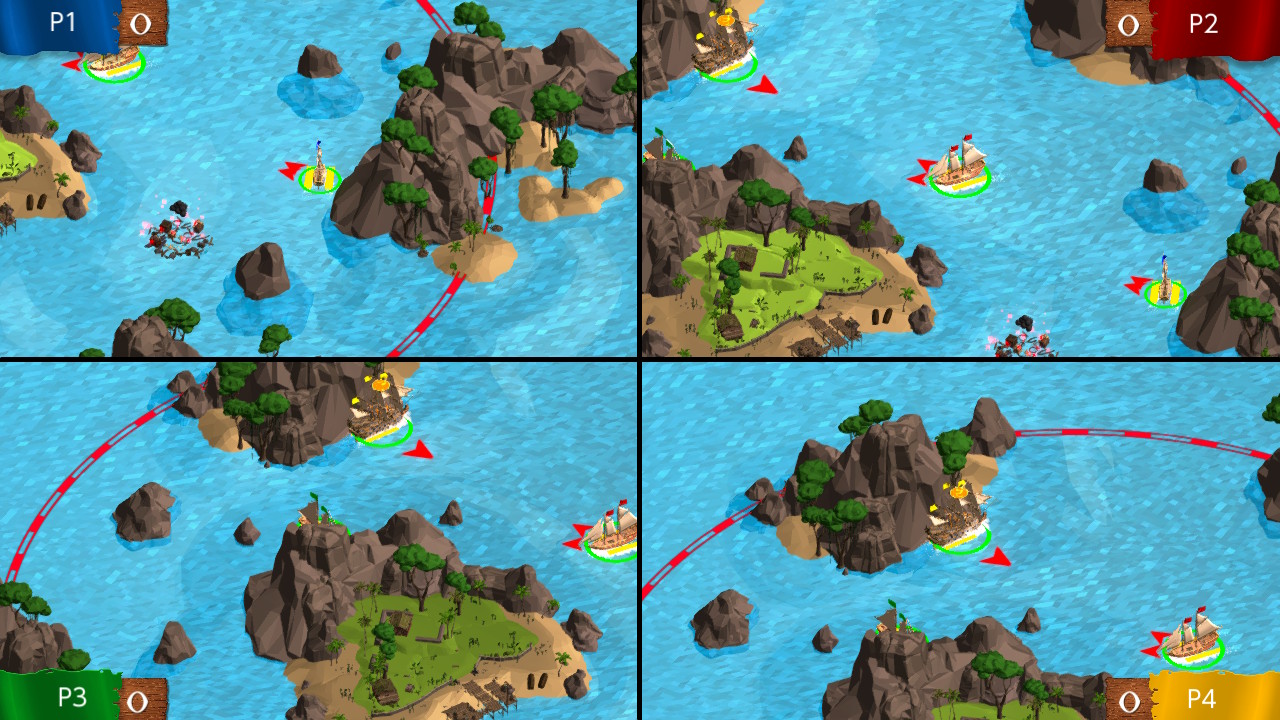 Presentation-wise, Pirates offers a very simplistic aesthetic. Although adequate, its graphics are rather basic, but functional. Although the ships are nicely animated, with casting sails and firing cannonballs, the sea itself contains no animations whatsoever; instead it has the appearance of a patchwork quilt. It’s not a game-breaking omission, but does produce a rather strange looking aesthetic to its watery themes. Rock formations and islands look suitably impressive, although they are rather sparse with their inhabitant activity; despite some of them containing some rather impressive ports. The sinking of other ships is also a lacklustre experience, again, containing no animation or atmosphere in being victorious. A suitable jaunty, pirate theme plays throughout as the game’s soundtrack, but any sound effects are rather limited with weak cannon-fire and hardly any crunch with its collisions.

Overall, Pirates: All Aboard! does contain some elements of fun, albeit in a very limited form. Despite containing some single-player offerings, these modes are rather lacklustre and feel as if they have been merely bolted on. Despite its oceanic settings, the gameplay contains no depth whatsoever, again limiting its appeal. However, with its local multiplayer element and casual capacity, this is title that can offer some form of entertainment; especially with its pick-up-and-play and ease of use mechanic, making it an ideal game to play during a lunch-time break with work colleagues, or friends. It can also be a fun family game that children can easily play, something definitely worth considering with its pocket-money price. Past this though and the game distinctly feels, well, a bit shipwrecked really and washed-up. With a bit more care and attention in its single-player mechanics, this would have easily been a treasure trove of entertainment. As it stands though, in its current state, Pirates: All Aboard! is merely nothing more than just a piece of eight.