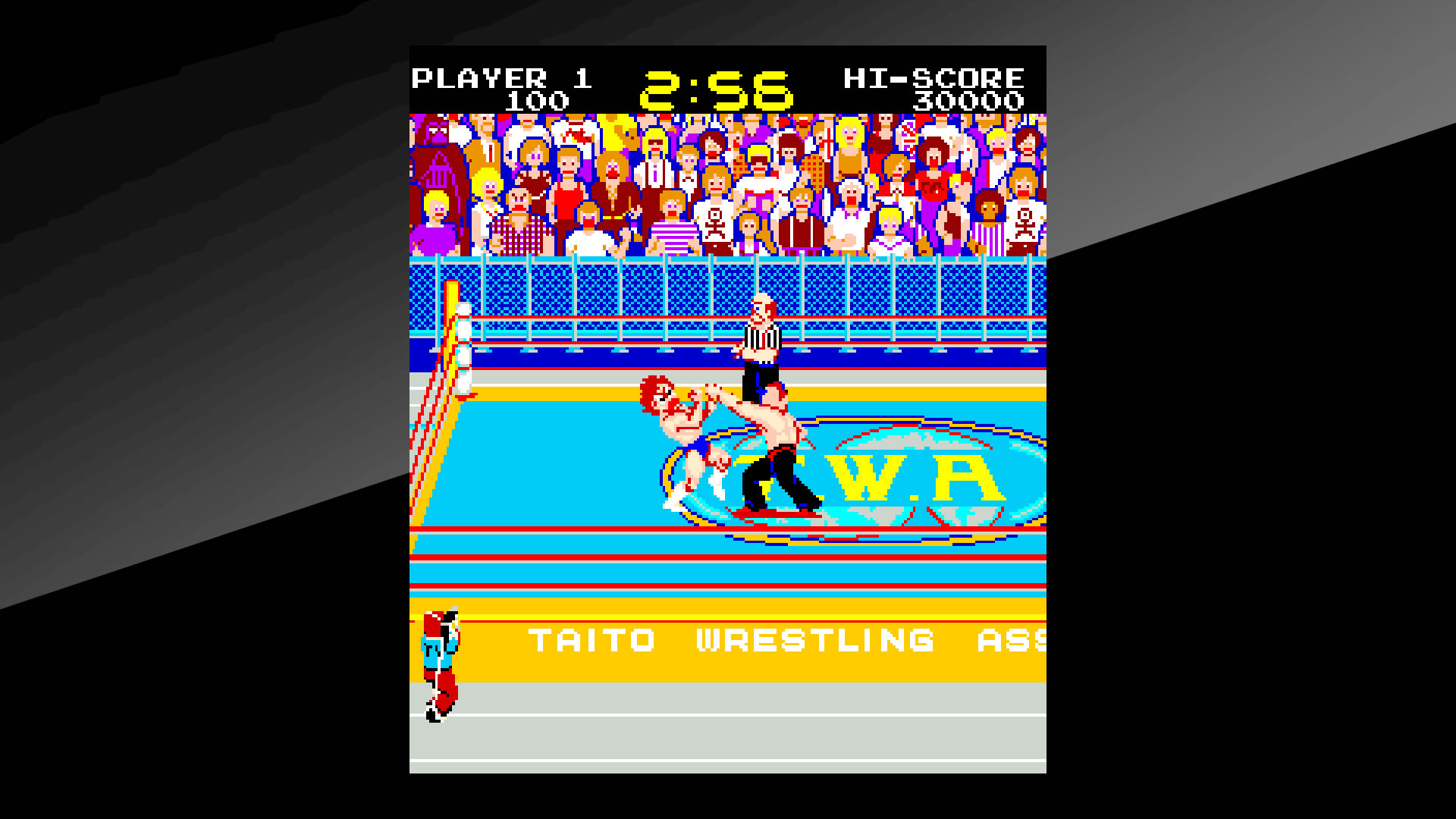 If you have never played, Taito’s arcade 1985 wrestler, it’s probably best that you leave this game in the past. It’s not that this is an especially bad game or anything, it’s just that, well, this is one of those classic arcade games for which a sense of nostalgia is all but essential. Some of Hamster’s Arcade Archives releases hold up incredibly well (see Gradius), but Mat Mania Exciting Hour (or Mat Mania The Prowrestling Network as it was known in much of the West), that’s one of those games in which ‘archive’ feels like the operative word. It’s good to have the game available for posterity’s sake, but for younger gamers looking for a quick dose of arcade-style wrestling, this might be a step too far back in time. There is still fun to be had for those who have played the game in the past and even for those with fond memories of 80s arcade gaming in general, but if your first console was, I don’t know, a PlayStation 2, you’d be better off giving this charming but unquestionably dated wrestler a wide berth.

That probably sounds rather negative, but for older gamers, this really does have enough charm to overcome its incredibly dated control scheme and decidedly old fashioned visuals. From the infamous pin count, “One, Two, Threeeeee!” to the array of famous cameos in the crowd that range from Darth Vader and Popeye to Stevie Wonder and John Travolta, Mat Mania Exciting Hour is the kind of arcade game that, while a little long in tooth, has enough of that original magic intact to make it a worthwhile experience for those who remember playing arcade games in, y’know, an actual arcade. The bright, primary coloured visuals, catchy chip-tune tracks and borderline obnoxiously annoying sound effects are all pure 80s arcade gaming, and you know what, Mat Mania is all the better for them. 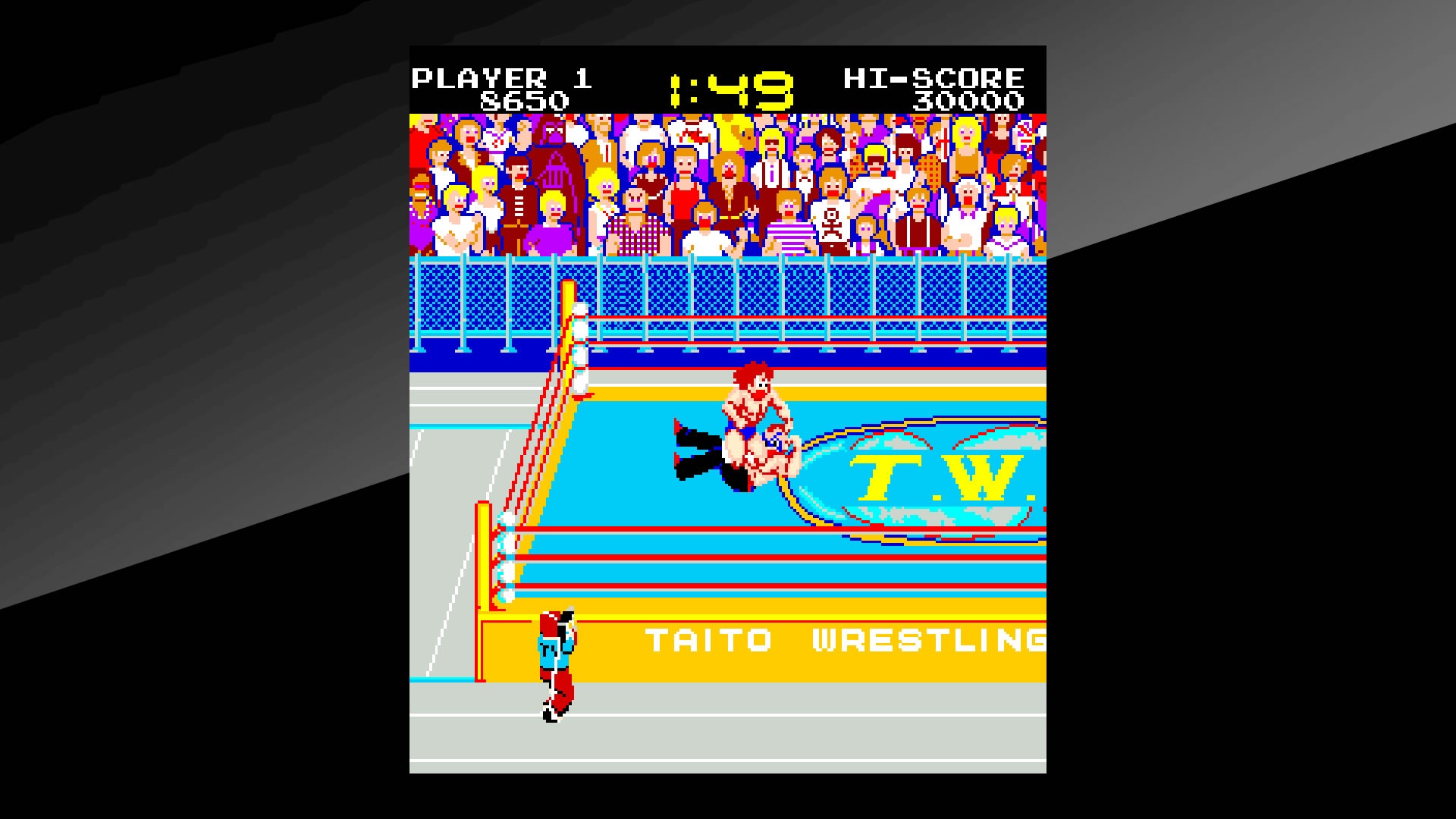 Still, aesthetic appeal aside, there is no getting around the fact that Mat Mania Exciting Hour’s core gameplay has aged pretty badly. The two button control scheme does ensure that the game is easy to pick-up and play, but it also ensures that, even by arcade gaming standards, that the game mechanically very basic. A combination of timing and positioning does allow for a decent range of moves, but with only one character available, the brilliantly named, ‘Player 1’, Exciting Hour was never going to satiate the expectations of modern day wrestling fans.

What is here works well enough, but unless you know the approach required for each of the five enemy wrestlers standing between you and T.W.A Championship glory, you’re going to come up against some pretty brutal, and often infuriating difficulty spikes. Despite the limited move-set, each combatant requires a very specific approach with only the Insane Worrior (that’s not a typo) offering up a relatively straight forward encounter. As for Blues Bloody (or Golden Hulk as he was known to US gamers) and pals, they’ll need a more tactical approach lest you spend the majority of each match being punch, kicked and generally thrown about the ring.

Most of the enemy wrestlers are entertaining takes on classic 80s wrestling archetypes with each offering a surprisingly unique challenge, and while that’s all well and good for the most part, be warned that some characters have certainly aged better than others. Coco Savage for instance (the third wrestler that you face), he, well, he is a tad racist. While the name would suggest a mix between Coco Beware and Macho Man Randy Savage, the image (see below) certainly points towards a more questionable representation of wrestlers of African descent. Perhaps it’s the bright red lips, but when I see him, I immediately think of Tintin in the Congo…….and that’s never a good thing. 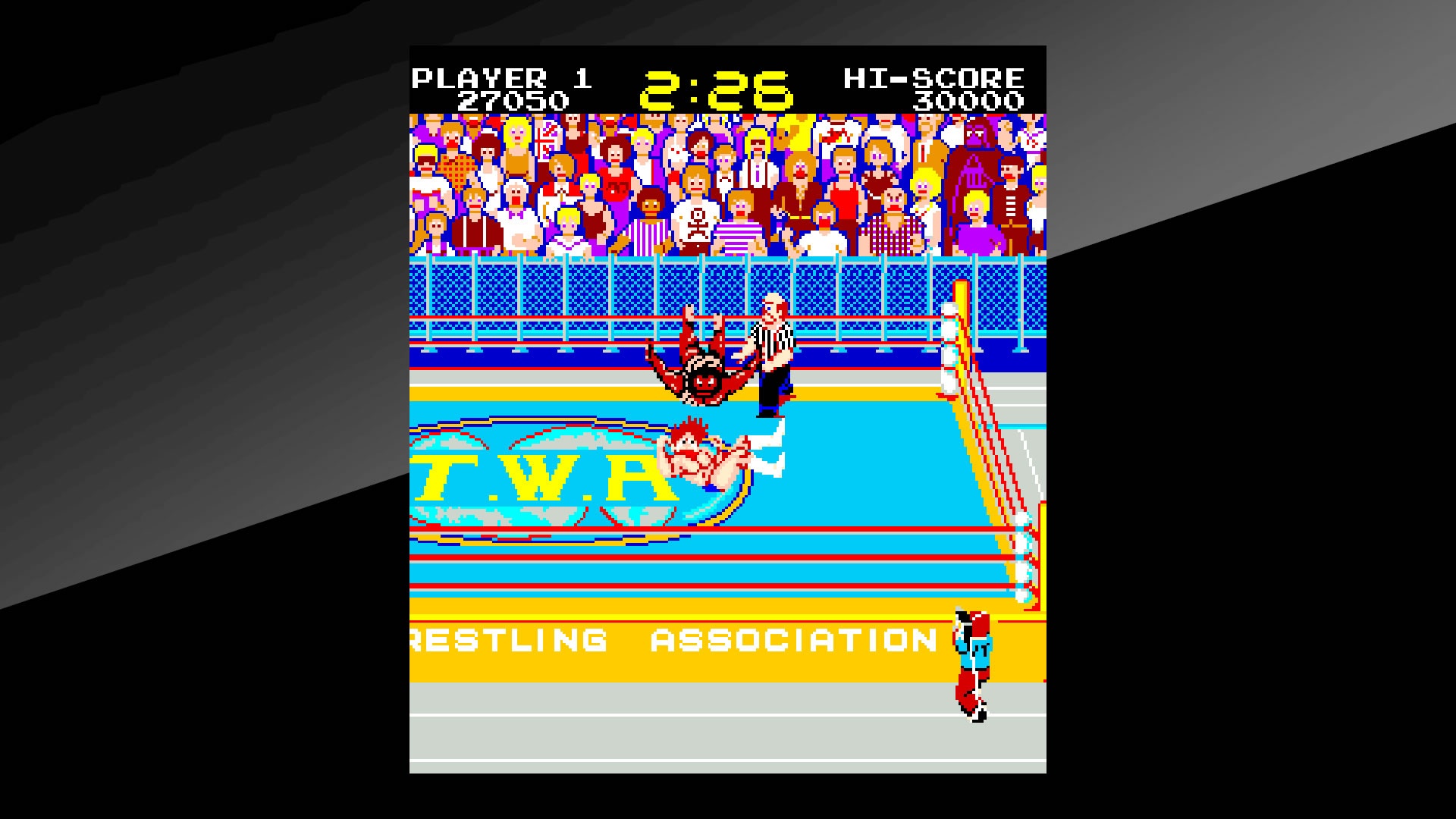 Lazy racism aside (and I really don’t think it was intentional), Mat Mania Exciting Hour delivers an entertaining, largely charming but undeniably old fashioned slice of arcade gaming. There is fun to be had for those old enough to remember this type of game and the scoring system that relies on keeping bouts going for as long as possible does add a modicum of additional tactical depth to proceedings, but with its harsh difficulty spikes, simplistic visuals and basic control scheme, newcomers will find very little to justify ponying up the rather steep asking price.

As is the standard for Hamster’s, Arcade Archive releases, this game, while being a perfect port of the arcade original, is as basic a release as you can imagine – with no additional extras and no reason to keep playing beyond finding your way onto the top 100 leaderboard (good luck with that), Mat Mania Exciting Hour really is a game geared towards the hardcore. Those with fond memories of 80s arcade gaming will most likely get something from this unabashedly and overtly 80s wrestler, but for the majority of gamers, Mat Mania Exciting Hour will provide very little beyond a stark reminder of how far video games have come in the past thirty years.