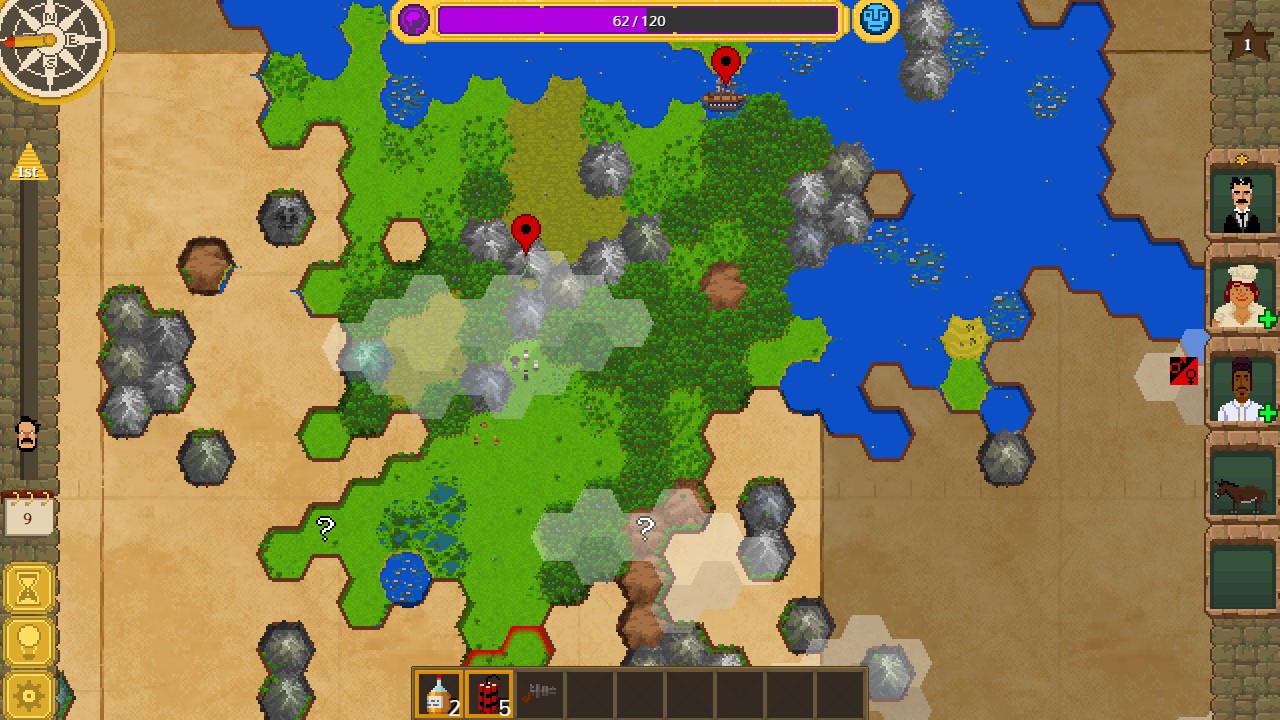 The undiscovered world must have been a magical place to explore. New lands, new civilisations and hidden treasures beyond our wildest dreams all waiting to be found from the explorers and expeditions that emabrked from the civilised world. It allowed the planet to become one, although colonisation and a disrespect for certain religions, cults and beliefs did create tensions with the intrusion upon lands that had been untouched by other humans for thousands of years. Nevertheless, being an explorer during these times must have been an exciting premise, something that is touched upon within Curious Expedition as it explores a release upon the Nintendo Switch.

Developed by Maschinen-Mensch and published through Thunderful Games, this roguelike adventure sees you following the same paths as the great pioneers and adventurers from throughout history. Set during the late Nineteenth Century, Curious Expedition revolves around a group of famous dignitaries who have formed the Explorers Club. Characters such as Darwin, Curie and Rasputin have decided to create a competition within the club, the rules being the first person to sail the world and collect the highest amount of riches, earns the right to have an honorary statue of themselves to be built and proudly displayed within the grounds of the club. Across six expeditions, you embark on a voyage to various locations in search of the fabled golden pyramids, explore untouched lands and gather as much loot as possible to become the greatest explorer of all time.

You begin the game by picking from a selection of characters, each one having their own unique set of stats, perks, abilities and party members to provide support. From here, you then choose the land of your location across one of the many continents of the world and embark on your very own adventure. Once your ship slides into port, the game takes on a variety of elements, as well as requiring you to keep an eye on a number of mechanics in order to be successful on your venture of exploration. This is achieved by playing the game on a number of fronts, from procedurally generated lands to explore, narratives that resemble a choose-your-own-adventure style of play and a need to maintain the survivability of yourself and your party. 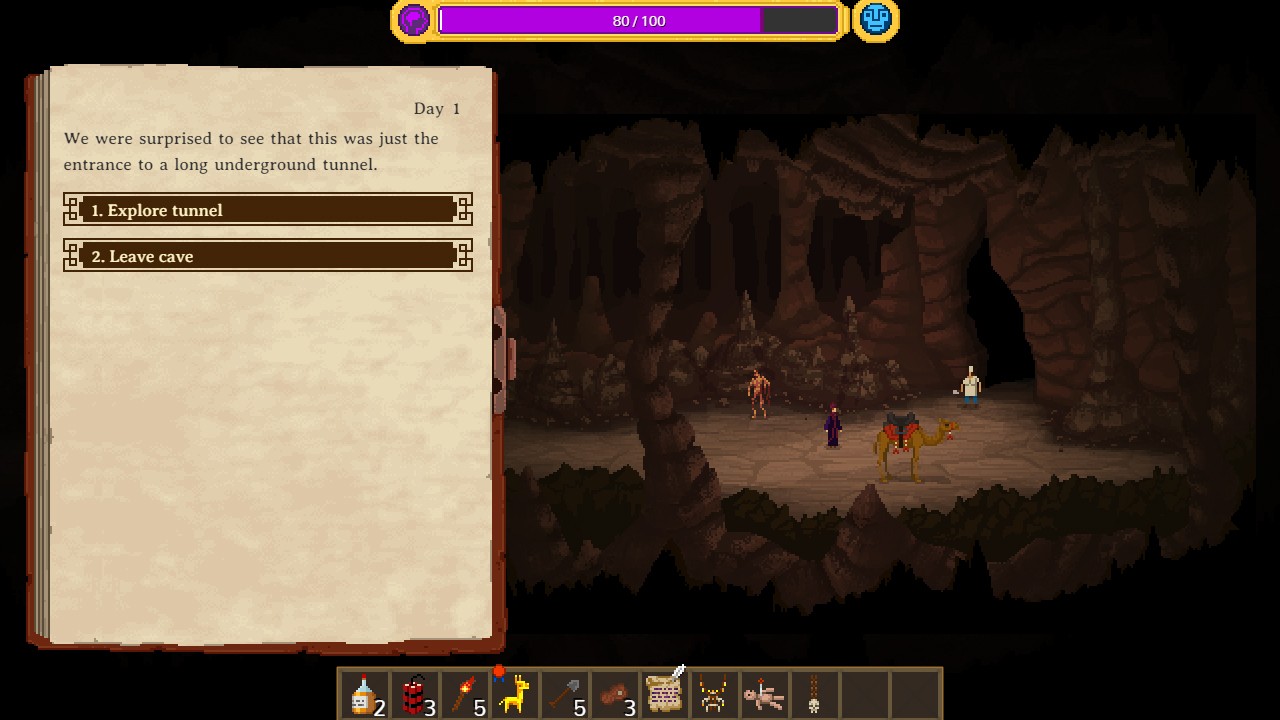 From the outset, every new location that you come across presents itself through a series of images and on-screen narratives to provide a description of settings and events. From here you are often presented with a number of choices that go towards shaping the events and outcomes of your expedition. Some are simple tasks such as explore the region or leave, others present more choices, such as resting for the night, bartering trades, equipping supplies or taking treasures. However, in order to find these locations, you first need to traverse the random generations of each map, uncovering its secrets as you delve deeper into the mysteries that they hold.

The main objective of each map is to discover a golden pyramid that lies under a fog-of-war somewhere within the land. Presented within a series of hexagons, you create a path for your party to tread towards discovering what the undiscovered country holds before you. The further progress inland, the more the fog lifts and exposes its secrets to you. These can come in a variety of forms, such as villages, shrines and caves, as well as many other mysterious locations or enemy encounters. Again, a narrative describes the setting and you make a choice on what you want to do within this setting. Whilst some choices may offer sanctuary or rewards, others can affect your standing with the local tribes to make you a friend or foe.

As you progress through your journey, different events and terrain can have a bearing on your overall party and their sanity; something that is measured by an on-screen gauge. Different terrain types have differing effects on your sanity, making it important to rest when you can in order to keep everyone’s mental well-being in prime condition. A small compass, also on-screen, shows you a general waypoint towards the direction of where the golden pyramid may reside. However, certain events can also highlight specific areas of the map that can be ignored or explored. As always, these can be rewarding or detrimental; depending on what they reveal when you discover them. Sometimes, combat is unavoidable and presents another element within the gameplay that involves the luck of the dice. 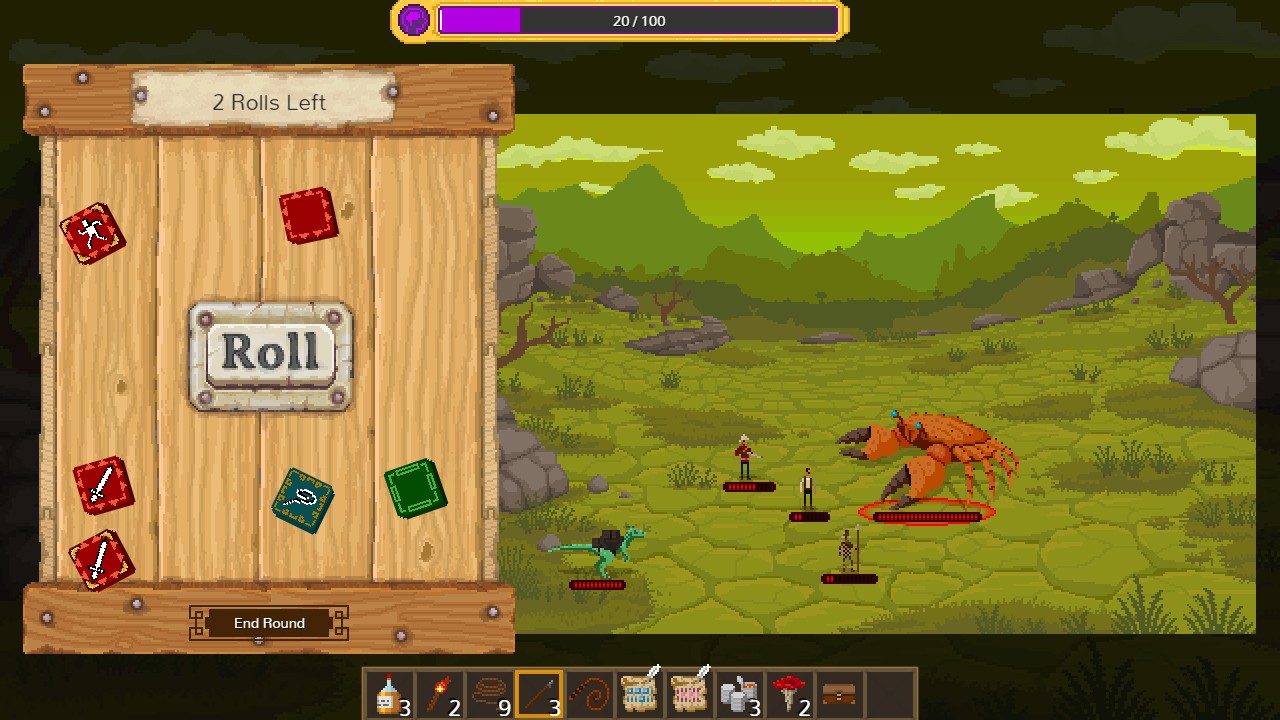 Rather than being number based, each dice holds a face value of guns, knives, eyes or hands and so on and so forth. The objective here to roll a series of combinations to best suit your predicament. Each character in your party can hold different variations of die to use and can alter the number of dice thrown. Much like the classic game Yahtzee, you can choose to put certain combinations aside and re-throw the other dice, up to three extra rolls, in order to produce further combos. Hit the right notes and you win the encounter. However, there’s a huge element of luck involved within these sections of the game; even more than what is found with conventional dice. Once you discover the pyramid, you then return to your ship where you can equip your character with a perk, before embarking on to the next continent and your next expedition. Complete six expeditions and everyone returns to the club and the character with the most loot and valuable treasure wins the competition.

In many ways, the game plays in a similar fashion to a board game, but also hold many elements that revolve around exploration, survival and treasure hunting to create an interesting role-player with the longevity of roguelike components. Despite its random generation of the lands to explore, the events within them largely stay the same; mainly due to the fact that they have a narration tied to them, as well as a series of decisions. This can eventually lead to some repetition, but only after a few hours of prolonged play. Each of your expeditions can vary in length, depending on how quick you find the golden pyramid, or how much you want to explore. However, with the ability to save at any point, this is a game that you can drop-in and drop-out of at anytime, making it a perfectly casual game to fill the time. Its overall graphical and sound presentations present some nice locales and ambience while you play and the stories that unveil as you explore, create a nice backdrop to each individual exploration.

Overall, Curious Expedition is quite a unique game that plays an interesting adventure in a casual capacity. Its roguelike elements and randomised maps do provide a good source of longevity, although this is somewhat counteracted by repeated events. However, the general level of gameplay in revealing your map, keeping your party safe and ultimately, working towards the requirements of the overall competition do provide an interesting backdrop in what you are trying to achieve within the game. In this respect, the game successfully conveys the feeling of embarking on an intrepid expedition and for that alone, makes this a game that’s well worth exploring.