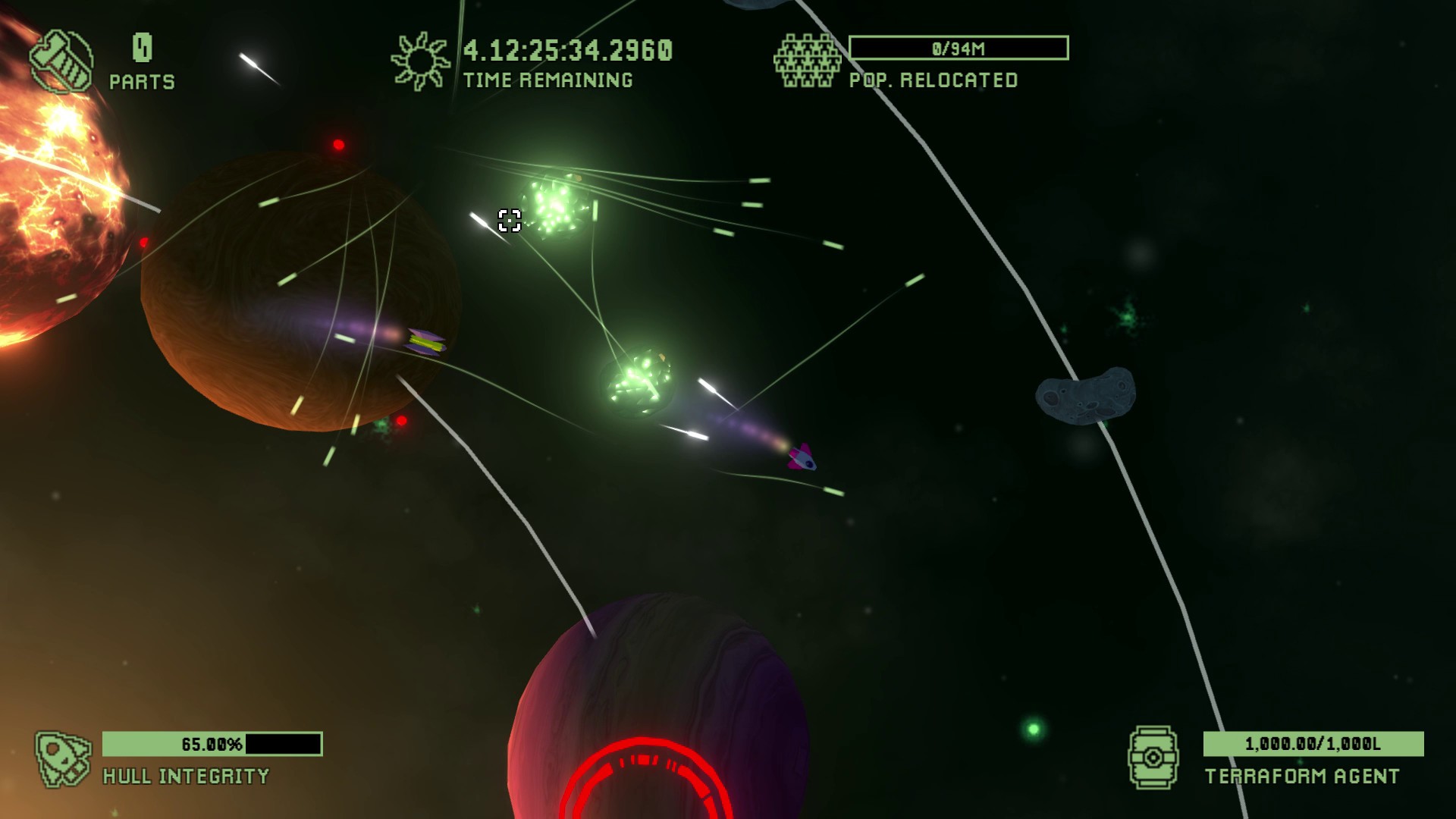 Jump back in time to when games were 8-bit and pixelated, Cosmic Ray is a game which gives a retro and fun experience in short bursts of five minutes per session. The sun is about to die and you are tasked to find a new home for Earth’s population amongst the stars.

To fulfil your mission, you’re given a starship and fuel to terraform the planets you come across. Your mission is given to you via onscreen messages. Each playthrough gives you the same message, but from a different character with various “flavour” differences. Essentially, they all give the same message, but the delivery varies from character to character. These quirks carry from your mission brief to the messages your scanner sends you. They have no bearing on your mission or gameplay, but they are fun to read and add character to a simple game.

Cosmic Ray requires you to go to planets in other solar systems and terraform them to be populated by Earth’s humans, but be warned: while some planets benefit from terraforming and will become viable for settlement, others won’t ever reach that point. Unfortunately, you only know for certain which planets are viable once you’ve attempted to terraform them, which makes this a process of elimination.

To navigate the universe, you’re given a scanner which leads you to planets. You’re also armed with a laser turret, which comes in handy when stumbling upon hostile aliens who attack you. Being attacked or hit with a meteor or debris causes damage to your ship over time, which becomes problematic when your ship gives in completely, resulting in end game.

Luckily, resources are available on all planets, including ones that can’t be terraformed. These resources can restore the damaged parts of your ship, and can even grant special abilities to your ship, such as a speed boost, which is helpful when you’re racing against the clock. 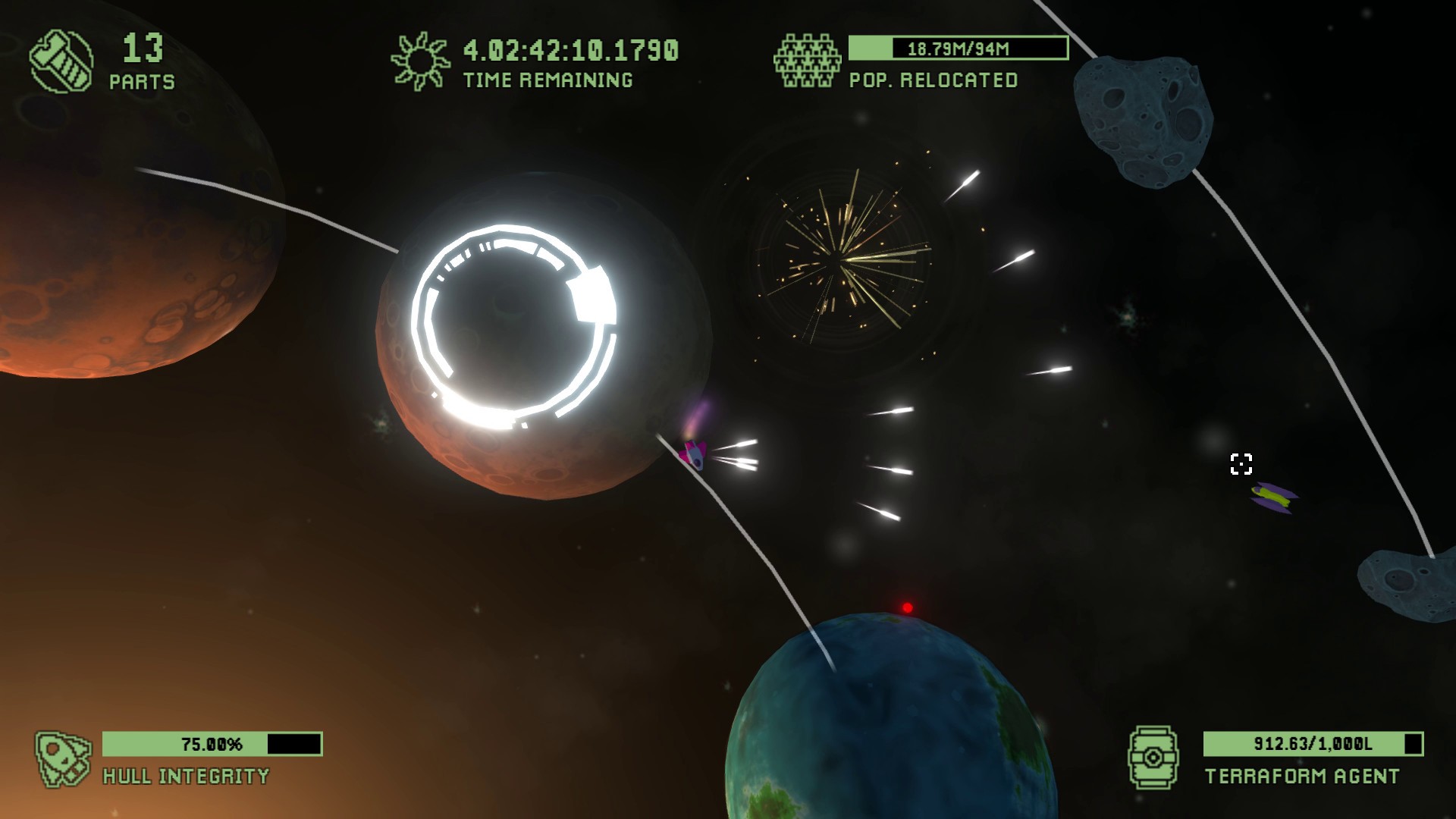 The game is played in five-minute segments: one minute per day before the sun in our solar system dies. This means that each gaming session is counted, so you won’t be spending hours playing Cosmic Ray. The developers, Cosmocat, designed the game this way to provide a short but entertaining gaming session to kill a few minutes, perhaps after work or during a break. While resettling the entirety of Earth’s population during those five minutes is nigh on impossible, it is a fun goal to strive towards when you’ve got a few free minutes but not enough time to get distracted by something more captivating.

Cosmic Ray’s game design and art are nothing short of nostalgic; even for someone who only came to gaming long after the age of the video arcade, this game made me think of the games of yore, such as PacMan and Space Cadet Pinball. Using simple graphics and mechanics, Cosmic Ray brings the nostalgia of the arcade generation to your home.

To compensate for the simplicity of the art and design, the music plays a large part in creating atmosphere in Cosmic Ray. It combines atmospheric textures with the kind of 8-bit style music you’d expect from an arcade game, which opens up the world of Cosmic Ray and turns it into an exercise in relaxation. The sound effects of the laser turrets, space travel and terraforming are also appropriately satisfying. 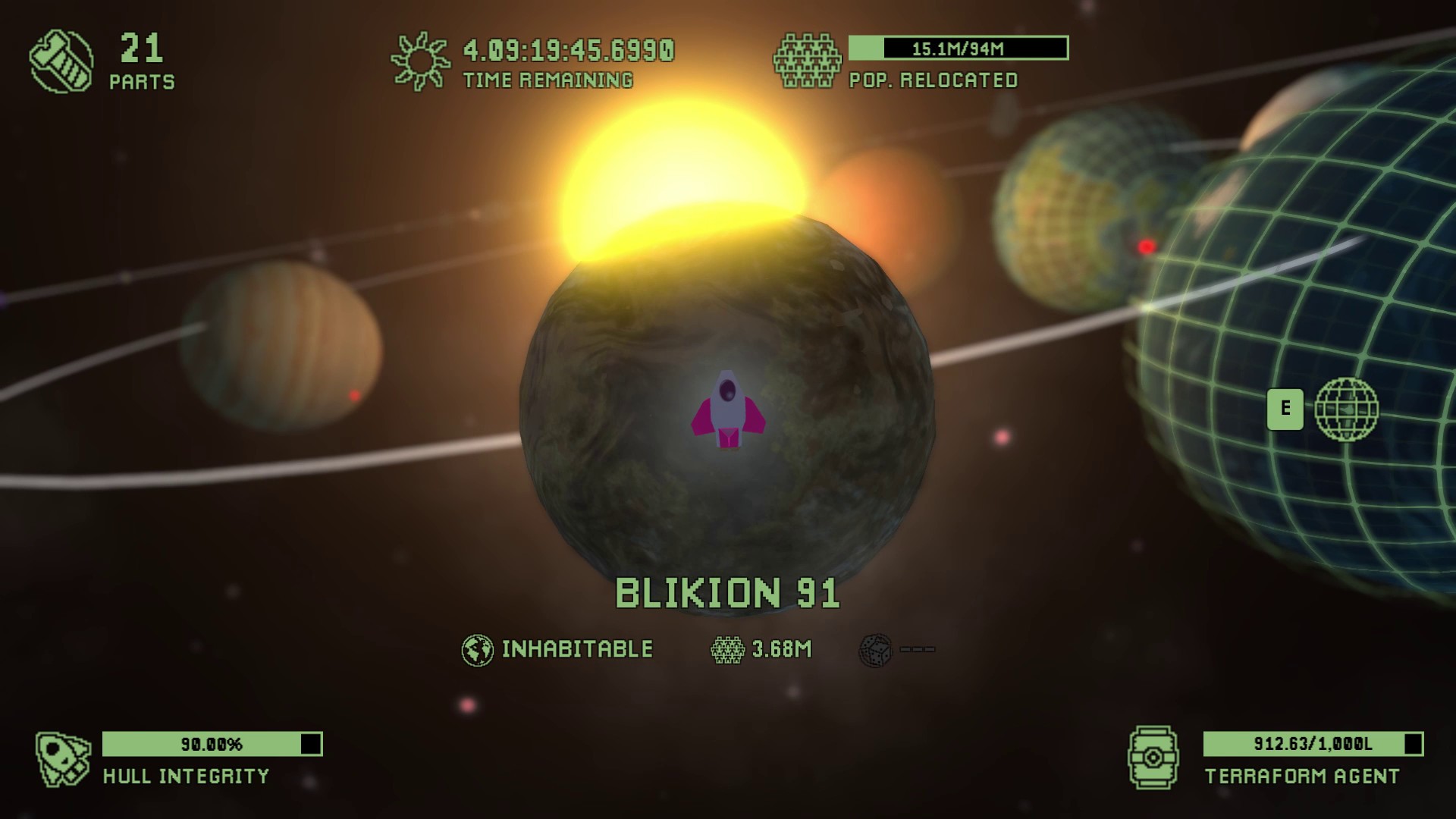 Due to its structure as a short game designed to be played in five-minute bursts, Cosmic Ray has fairly high replayability. While this isn’t a game anyone’s going to binge, it is one which can be replayed at intervals. There are no story paths to retread, which eliminates a lot of the repetitiveness which comes with replaying more story and character centered games.

Cosmic Ray is a game which delivers what it sells. It delivers the nostalgia of games of old, and proves to be a relaxing and entertaining distraction from work and every day life.

Cosmic Ray delivers what it sells: a quick distraction from the mundane of every day life. Packaged as a nostalgic arcade-style game, it succeeds as a relaxing and entertaining diversion designed to be played in five minute sessions.