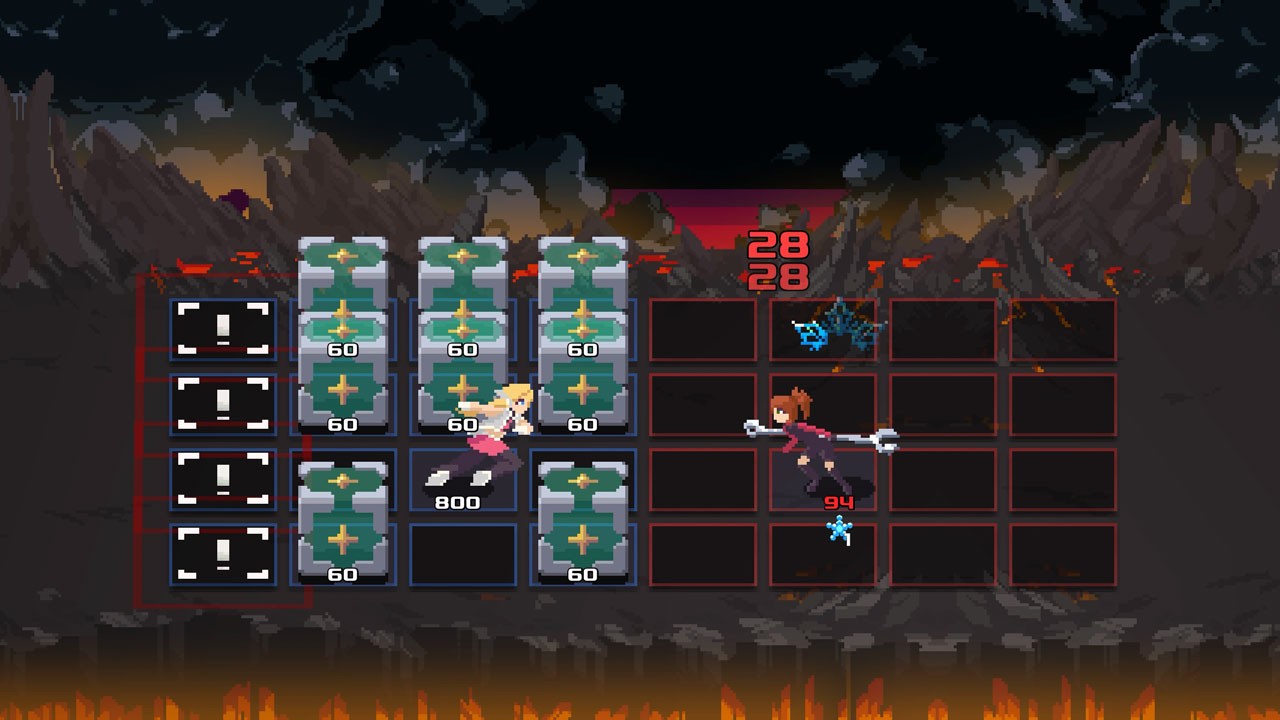 Sometimes a game likes to reveal itself to you, bit by bit, through exploration, trial and error, and outright mystery and mystique. There are certain games that need you to try new things and push the bounds of your own understanding in order to really appreciate what’s happening inside. The Friends of Ringo Ishikawa was one such game, where you received almost no instructions by design and asking you to figure out the full scope of what turned out to be a satisfying, emotionally heavy experience. Then there are some games that feel like there SHOULD be more instructions, but not having them creates a different pathway. With One Step From Eden, I honestly believe there ought to be more than just a quick set of instructions for this amazing genre blender, but, without proper guidance, I can say that familiarization and mastery is even more satisfying.

The story of One Step From Eden, which is the astonishing work of a single developer (Thomas Moon Kang), is obfuscated in lore and ideas that seem to spring from the gameplay itself. You take on the role of one of several characters on the journey to Eden, the promised land of refuge in a world that’s been destroyed by war. Saffron, the initial character, is merely trying to survive her trek across multiple landscapes and terrains, all of which are full of hazards, enemies and even worse. Along the way, your character will gradually hone their skills and their speed, encountering more and more difficult enemies until they either find paradise or succumb to evil and defeat. How far will you get before you must finally rest? Will you bask in the reward that we all must seek? Or will you draw your last breath without having Eden in sight?

You could probably write several pages about the gameplay of One Step From Eden, but I’ll try and boil it down as best as I can without overwhelming you with information. You work on a grid battlefield, with half being accessible/movable for your character and half for the other team. It might give you shivers of Mega Man Battle Network, and there’s more to support this idea. As you go, you pick up different spells, which you cast during battle through using a recharging mana bar, and you can only cast the spells once a round before shuffling your deck of spells. Yes, it’s deckbuilding as well, and it’s pretty turbulent at that! You end up picking up cards each and every time you finish a round, so your library gets pretty robust right away, and you may or may not decide to edit that down. You can focus on having cards of a certain principle (different damage type, different attack radius), or you can just have one of every flavor and go nuts in the course of a battle, especially since you can always trigger a shuffle and just draw new cards during combat…if you have time for that. The combat is real time, and you usually have a primary weapon to plink away at the enemy, but you gotta be careful because stuff crops up all the time. You don’t want to shoot the nurse that’s being held hostage, because eliminating the enemy without killing her means healing yourself. There might be obstacles that you need to take care of, on your side and their side, and they might blow up in the process, so you need to figure out the range of it all. 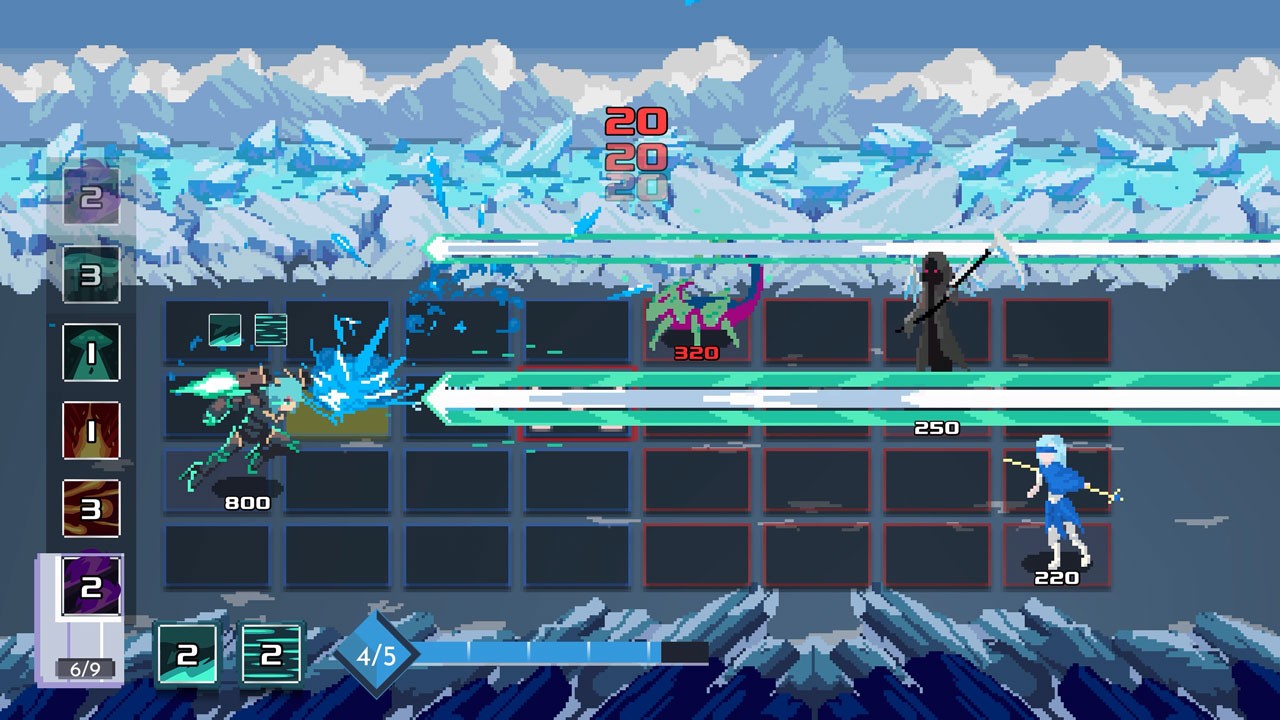 This is what I’m talking about with One Step From Eden. Frequently, you find out something new each and every time you run through the game. Poison damage does damage every couple of seconds but gradually wears off. Frost damage can be further exacerbated, and can get worse depending on other environmental concerns. There are terms that I’m still, like ten hours in, that I don’t totally understand but recognize as important. I want to activate Flow. I have to be careful about triggering Fragile states, though there are artefacts that I can pick up that are helpful in this sense. Oh, artefacts are passive abilities that you get through levelling up and treasure chests, or sometimes for no apparent reason, and you need to tune those the best you can as they come, because once you have one, that’s it. And sometimes artefacts allow you to upgrade spells, and an upgrade is a one way door that can’t be taken back, so you really need to consider before upgrading anything and everything. It’s no surprise that this game has developed a robust and technical community that’s mapping out everything on its personal wiki, and it’s also no surprise that this game appeals so much to people who are neck deep in metagaming and adore min/maxing with only moments to figure things out. It’s seriously a deeply complex, thorough game, and I keep playing it even though I don’t have a hope in the world of getting to Eden.

One Step From Eden is, quite frankly, unfair. And I hate saying that because it implies a certain lack of skill, but I don’t think that’s the case with this game. Due to the nature of the route maps, you have only a small idea of what’s coming every time you enter an area. Crossed swords are enemies, dragon heads are mini bosses, but which of these two choices are more difficult, you won’t actually know until you enter the fray. Hazard warnings can have nurses, merchants, both or neither, and you might only have a moment to decide who to save before the game decides for you. Campsites are the only place that felt safe, since it’s where I could recharge my HP slightly and, best of all, get a larger buff bonus if I didn’t murder the boss of the previous world. Which takes a lot, because you HATE that boss when you finish the battle. The boss starts at full HP. You have whatever you still have left from when you started. The bosses have attack patterns that have a momentary tell that you need to react to immediately. You need the best damn reflexes in the world to avoid being turned into jelly, because only a couple of artifacts bring you back to life, and none of them do so at full HP (I think). Sparing a boss should give you a bonus in the future at the expense of not getting a lot of XP and money currently, but that’s really okay because the money is mostly worthless. Going out of your way to find a shop locale isn’t worth it most of the time. 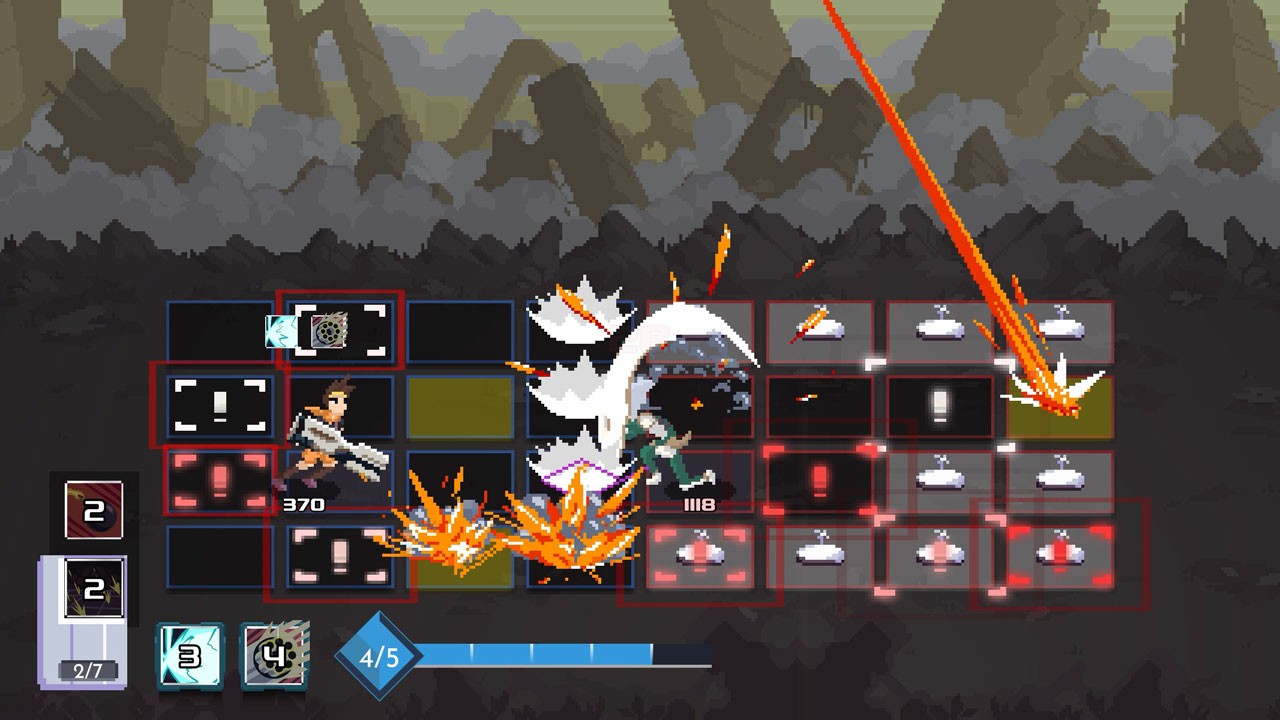 One Step From Eden has so much style, though, that I do keep diving back in time after time after time. The high density pixel graphics are gorgeous, and they help to weave this story that I still cannot figure out. There are robots and lasers, but there’s also what appear to be ghost dogs, angry cacti and Death himself. Sometimes you kill all the enemies on the screen, sometimes you just attack one and the rest take care of themselves. You summon turrets to do your dirty work. You strike with lightning, orbital lasers, massive shockwaves, acid rain and countless other spells. You are forced to move about as fast as possible at all times, and you genuinely and truly have to get good at this game and it’s damn exciting. There are several bosses who seek to absolutely destroy you through minefields, explosive music, and literally teleporting to your side of the screen and shooting you in the head with a gun. It’s unfettered chaos and it is so damn fun that you don’t even care when you die. It takes so long, but soon the first two worlds become a breeze to get through, and you see “Flawless Victory” again and again as you manage to hold onto your 1200HP just that much longer, and even get stronger and better. You want to unlock more and more, and I just wish the first unlock for Saffron to change from her gun to the Chrono controller wasn’t so broken and unbalanced. The Chrono affects time, but it uses up mana (the gun doesn’t) and so it feels like a terrible move, though certain online strategists insist its made for a stronger character build.

There’s promise in the air that a difficulty balancing patch is coming, and I sincerely hope it is and look forward to it. One Step From Eden is worth the price of admission at current, based purely on the fantastic design, the banger soundtrack and the fact that it’s totally addicting and enjoyable. The biggest complaint is how hard it is, so I would put this even higher if the game was shifting and actually giving me a chance to play it on “Easy.” Even if the game mocked me for it, I want to see how intense it can get and what Eden might be like. I want to have a battlefield that isn’t so chock full of obstacles, enemies and traps that I can actually flit about beyond world two and feel like a post apocalyptic badass. I want to love One Step From Eden, and so I do; but it has a real chance to become even more lovable.

One Step From Eden Review

A brilliant, fast-paced title that reeks of originality and execution, it’s only major flaw may entice others; an absurdly hard difficulty curve.