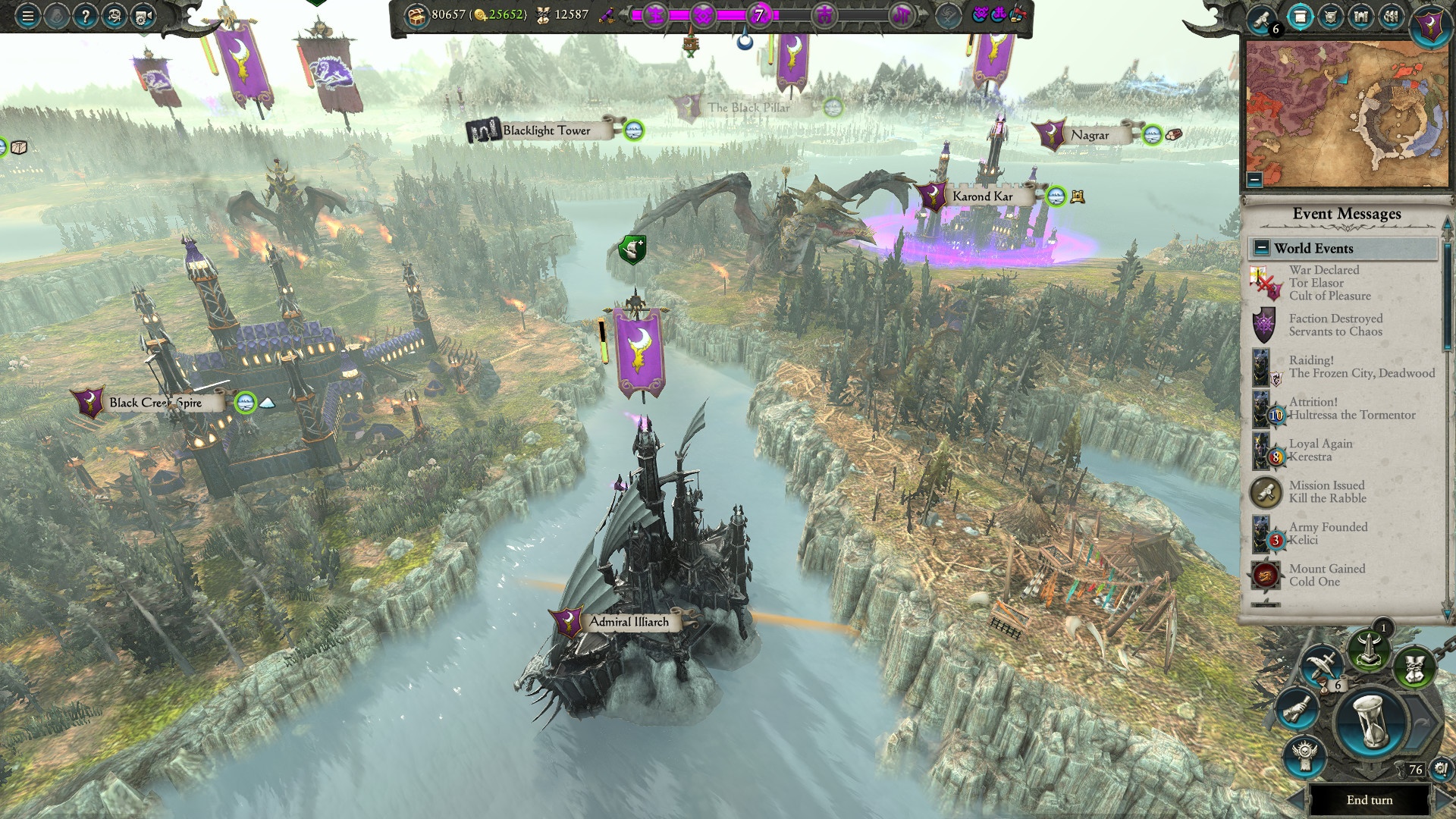 Total War: Warhammer II sees the real-time strategy franchise once again step out of its historically-based comfort zone to embrace the fantasy world of Warhammer. Continuing Creative Assembly’s trend of building on a successful title, as they did with Empire/Napoleon and Rome II/Attila, this new game comes hot on the heels of 2016’s original foray into the world of Warhammer. In a setting filled with fantasy lore, can this game find the magic touch?

I will jump right in with the battles (the main reason these games are so popular after all). The hallmarks of a classic Total War game are all here as you deploy your units, manoeuvre them into position, and attempt to vanquish your foes from the field all in real-time. The battlefields themselves are wonderfully detailed with numerous natural features. You have to quickly learn to take advantage of the terrain, which can be just as important in battle as strength in numbers and tactics. There is nothing quite like the feeling of surprising your enemy with a flank or rear attack having kept cavalry units hidden in the trees for the early stage of a battle. Nor is there anything quite like the feeling of panic and dread as enemy reinforcements arrive and quick changes to the battleplan are required. Total War has always offered an immersive battle experience and this is no different.

The variety in battlefields is impressive. So far, I have sent my troops to fight on flat plains outside city gates, in siege warfare against fortified opponents, in hills and forests on province borders, and even on the side of a volcano. High ground, narrow passes, dense forest, and open fields all help each battle feel unique as do the backdrops. Panning the camera round during battle, you get a real sense of the fantasy world the wars are set in.

There are options to engage in quick skirmishes, quest battles (offering a great way to take a closer look at each of the four playable factions), multiplayer clashes, and of course, the campaign. This allows you to combine elements of turn-based strategy as you move your forces around the map, raise armies, improve your province’s facilities and technology, and pursue allies through diplomacy, with the real-time strategy of pitched battle. It is in this campaign mode that the depth of the game reveals itself. There is an unwritten rule for game reviewers that says we should aim for ten hours of gameplay to get an impression of the features and the scope of the game for a review. Ten hours into to Total War: Warhammer II, I felt like I had just begun. 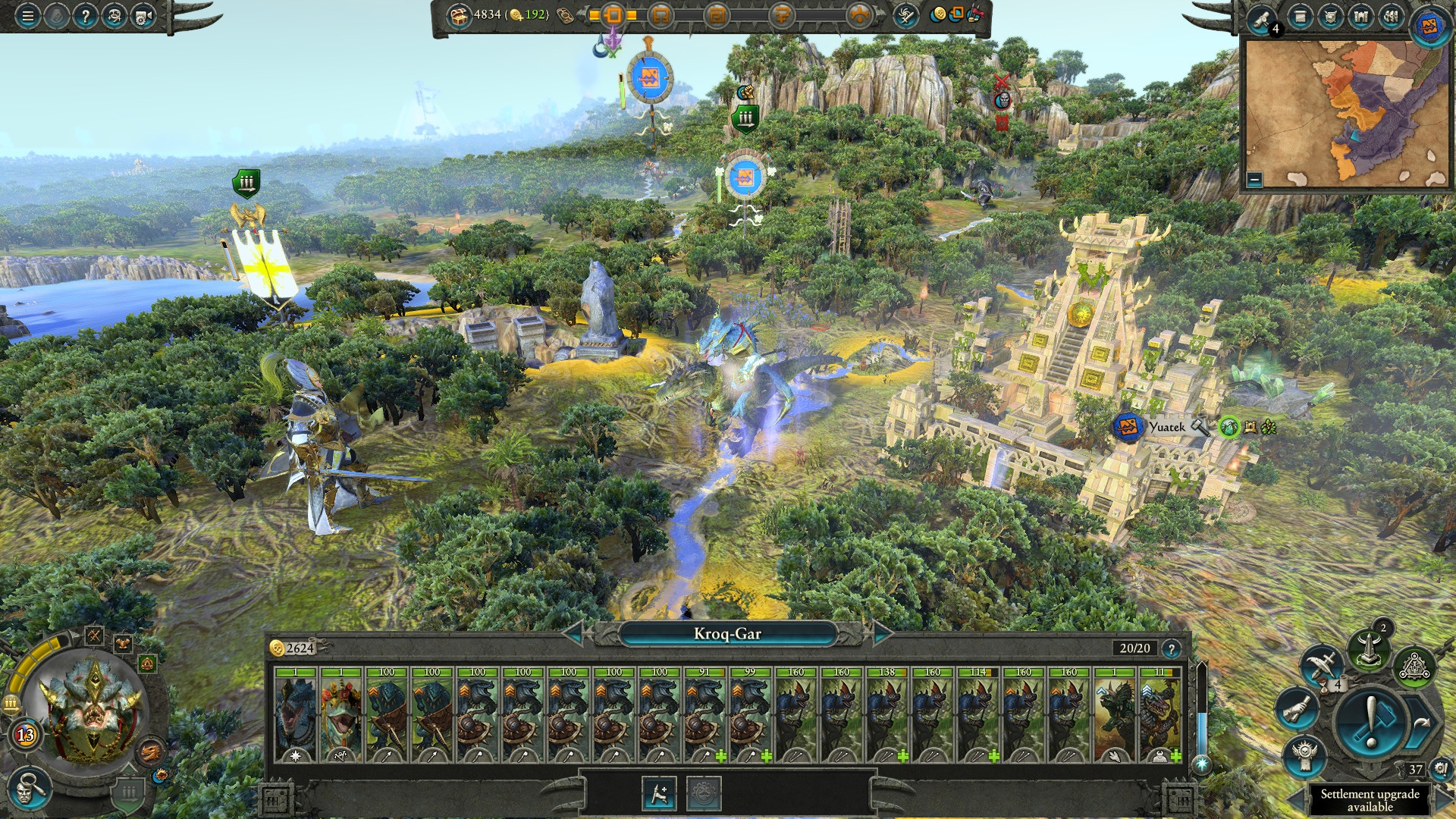 There are options to move things along more quickly in campaign mode. When faced with a weak enemy, you can take the option to auto-resolve (best only used when you are clearly the stronger side, however). When camped at the gates of an enemy city, you have the option to immediately enter battle or to play a long-term game by laying siege to the city before drawing your desperate foes out to the field. At times, other factors drive your choices. I often had to go to battle when a siege would have been a better option so that I could replenish my treasury through the spoils of victory and capturing the city. Upon taking command of a city, you have further options to occupy, sack, or raze it to the ground, all of which will have different effects on your territories and people.

So far, so Total War… but how does the Warhammer setting play into the game? Well, there is the backstory of the Vortex, created to keep demons out of the world, weakening as a two-tailed comet flies low in the sky. This causes disorder as some races panic and others see it as an opportunity to conquer their rivals. Four factions are playable at the start of the game (with more to come, no doubt, through DLC) – the High Elves, the Dark Elves, the Lizardmen, and the mysterious Skaven. Each group brings its own traits and unique strengths and weaknesses to the campaign map. The High Elves are the epitome of well-drilled, highly-trained troops while their Dark Elf cousins relish in the gore of blood spilled on the field. The Lizardmen are tough but frenzied fighters and the Skaven commit large numbers to battle to force victory whatever the cost.

Further differences between the factions present themselves in the campaign mode. Upon gaining victory in battle, you are presented with options of what to do with your prisoners of war, with each action carrying benefits and/or penalties for your forces. When playing as the High Elves, the honourable path of letting them live was most beneficial but during a campaign as the Lizardmen, mass execution was the way to go. I even had the option to allow my troops to eat their captives to replenish their strength – a gruesome outcome but a useful option to have!

In battle, each army is commanded by a lord with special abilities and spells that can be cast during combat. As well as a sphere of influence to rally nearby troops, you have the option to cast spells to galvanise or protect your fighters. With victory comes level increases and the chance to learn new abilities. These can be tailored to your preferred style of play focusing on battle effects to influence troops, campaign effects to get more out of your army, or boosting character stats of the lord himself.

Then, of course, come the units. While most of the basic units (spearmen, warriors, cavalry, archers, cannon, etc) only differ from other Total War titles in terms of appearance, there are also faction specific fantasy units. Sending your dragons, eagles, and terradon riders into battle makes for an impressive sight on the battlefield and adds to the immersion of the game world. 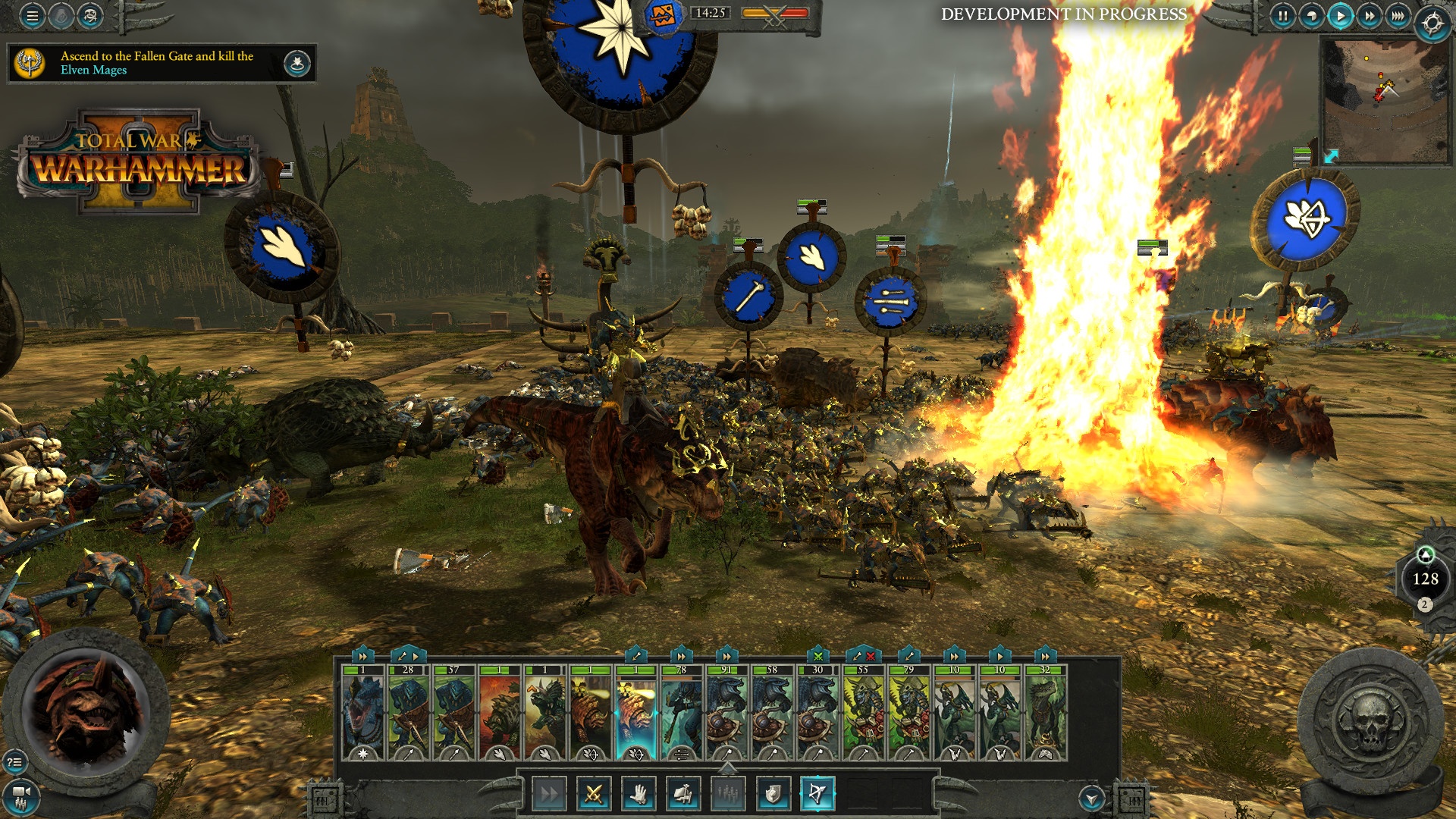 Another feature unique to the setting is the ability to perform rites. These are rituals and spells that can be performed when managing your territories on the map and offer faction wide benefits over a fixed number of turns. They also offer a way to win the game. Perform all of your faction’s rituals and you will earn the ‘Vortex Victory’. You can, of course, also win a ‘Domination Victory’ by eliminating your main rivals but the opportunity to win through ritual rites means you cannot simply flood the frontlines with armies. You have to be mindful of beating your opponents to the Vortex Victory. This also means even if you are frustrated in your efforts to conquer, you still have a chance to triumph in the end.

One aspect of the campaign mode that I appreciated was the chance to rebuild even when in a weak position. In my first campaign, I stretched my forces too far and too thin, soon running out of money and struggling to hold onto the quick gains I had made. At one point, I lost all my armies and expected to have to start over. However, I was able to defend my main cities with garrison troops and rebuild my armies within a few turns. Having learned my lesson, I re-entered the conflict with a more measured approach, paying more attention to managing my cities, keeping my citizens happy, and watching my spending more carefully. It is rare in my experience that a game will let you come back from such a position and I was happy to not have to relive the frustration of working through the opening stages all over again.

I only had a couple of minor gripes with the game regarding the battle mode. The camera took some getting used to as completely free rotation is not offered and I would at times find the camera swinging round when I expected it to pan. It also took a while to get used to positioning troops as I would often send my archers and javelin throwers to an advantageous spot only to find they were facing away from the advancing enemy units. This may be down to me having not played much Total War since Empire, however. One other issue was loading times. I have a new gaming laptop which runs the game smoothly but does not have an SSD, meaning long waits as the map and battles load up. At least the battles are worth waiting for!

This game, in short, is everything you would expect from a Total War title. The battles are fun with a decent learning curve (with multiplayer contests providing the ultimate challenge!) and the four initial factions are varied enough to satisfy most players’ needs without yearning for DLC add-ons. The campaign is truly on an epic scale and the different win conditions mean that you can apply different overall strategies in the pursuit of ultimate victory. The combination of turn-based play on the map and real-time strategy in battle is well-balanced and the difficulty curve offers a chance to comeback from the brink without the need to start over. Total War rarely fails to deliver and Warhammer II is no exception.