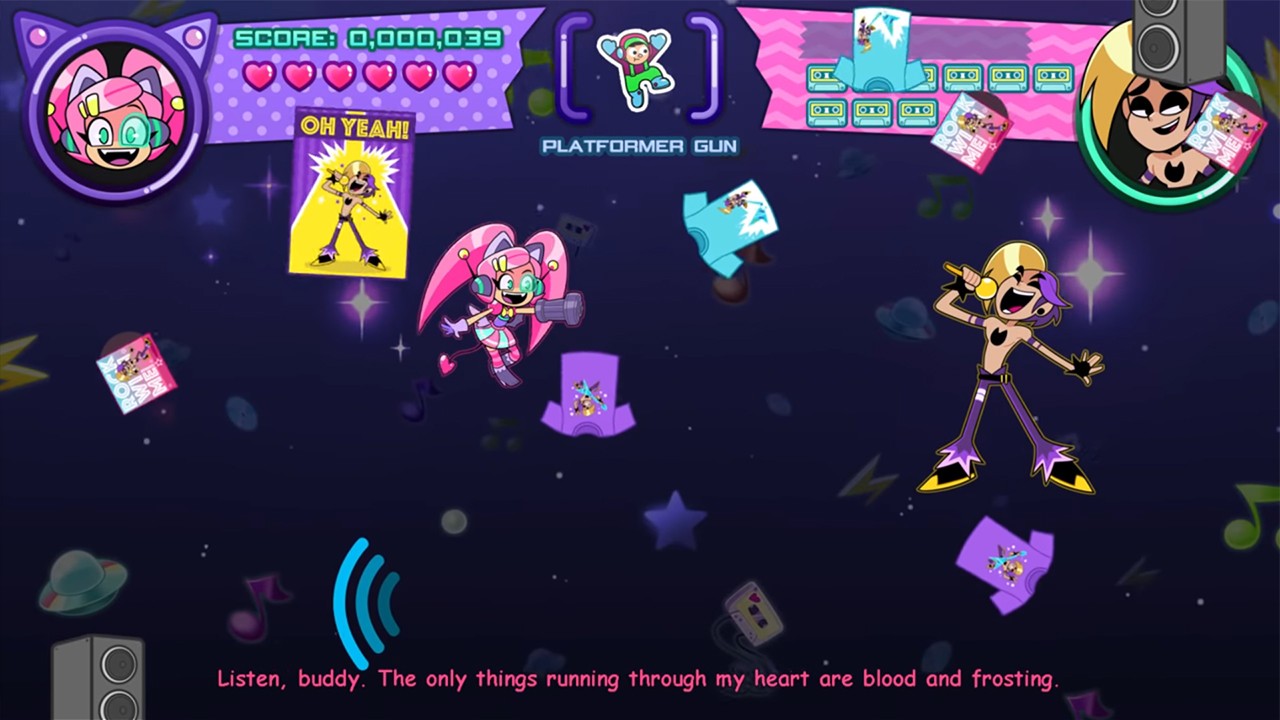 How far can a joke go in the grand scope of things? Years and years ago, Wayforward, the makers of some truly amazing games (still bumping to Vitamin Connection!), put forward an April Fools joke of sorts. They introduced a game that was pure, uncut nonsense: a side scrolling shmup starring an insane protagonist, in some truly bizarre situations, with an arsenal of absurd weapons to help her bounty hunt across the universe. Of course, it was a joke, but, like all good jokes, it takes a level of believability to make it hook and land the laughter. Still, players were intrigued: could a game like this exist? Because they would totally play it, and even pay for it! Well, some years later, Wayforward worked with Humble Bundle to make that silly joke a reality, and this past April 1st the dream finally landed on the Nintendo Switch. For a paltry admission, you too can enjoy the insanity that is Catgirl Without Salad: Amuse-Bouche.

Kebako is an intergalactic bounty hunter who is, shockingly, good at her job. She is accompanied by her faithful companion, Squiddie, as she patrols the far reaches of space to find some truly dastardly, ridiculous villains. In fact, some say that Kebako’s amazing prowess at bounty hunting drew the ire and envy of some, to the point where a foul plan became afoot. Is it merely coincidence that all of the most recent marks for Kebako happen to be people whom she crossed paths with in previous encounters? Or is there a grander plan being orchestrated behind the scenes, done by someone seeking to undermine and ultimately bring down Kebako in a blaze of humiliation and glory? Keep in mind, this is all thought exercises being done by the narrator and the player, because Kebako barely has a thought in her head about what’s happening in the world around her. She’s blissfully unaware, possibly dim witted, but definitely hungry for anything but salad. 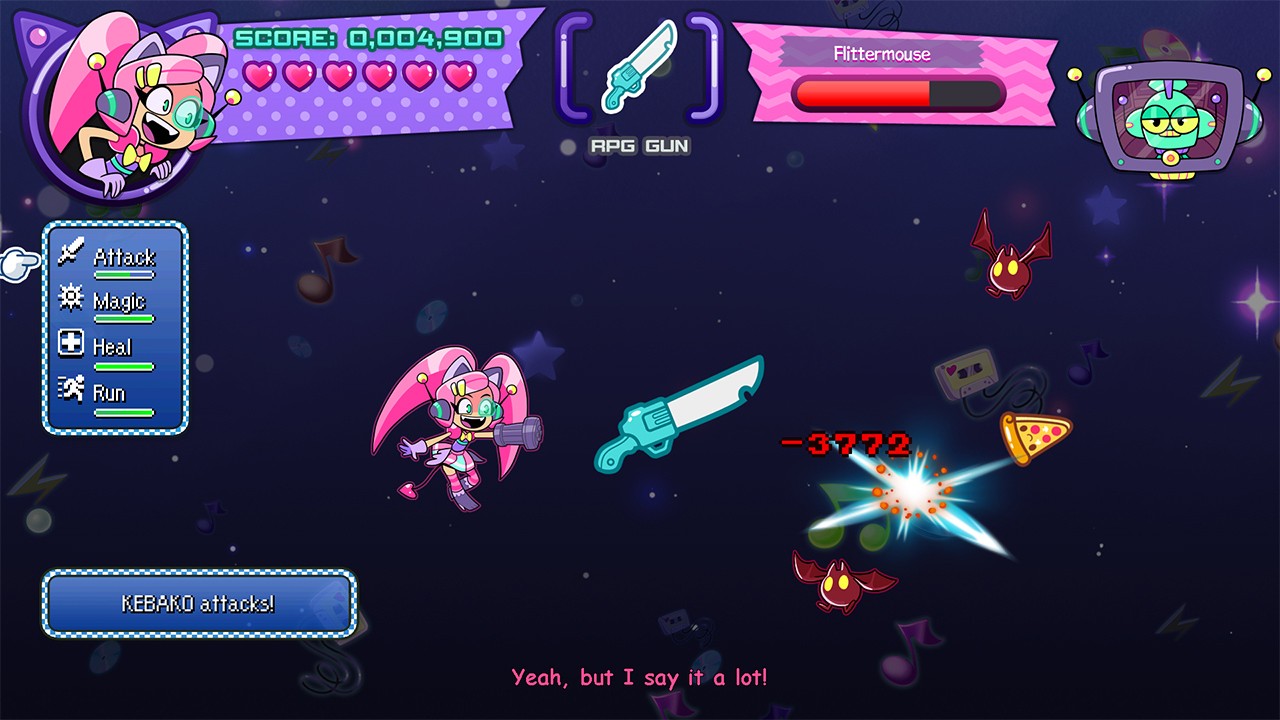 For those of you who got drawn in by the overly flamboyant description of what kind of game this is, you might need to pump your brakes a bit. Catgirl Without Salad is, at the core, a side scrolling shmup. You start out with six hearts, able to take six hits, and gradually are granted more through play and through beating the bosses (the different bounties). Kebako can move up and down, side to side, and has almost full range of the screen to dodge around enemies, projectiles, and collect dropped items. Your main weapon, the Pea Shooter, is your oldest and dearest friend (next to Squiddie). Whenever you drop one of your alt weapons, Pea Shooter is there to pick up the pieces. It may not hit as hard as some of the guns. It might not be as interesting. But it does one thing incredibly well: shoot everything that gets in front of it. And, without a massive laser turret to speak of or some kind of homing missile upgrade, Pea Shooter is what I loved best throughout, though the other weapons all have their charm and make up the majority of the other gaming genres that Catgirl claims to have.

Each gun powerup takes on a different, intense life of its own, and its worth trying them all out. The Pacman inspired gun, for instance, will do great damage in a single line, and hitting enough enemies usually results in a dropped food item (which recharges your health). The Mario inspired gun shoots a jumping figure that can rack up serious damage if you manage to jump on enemies in sequence, though running into them does a bit as well. The golf gun is one of my favorites, shooting up to six golf balls at a time in various directions depending on the swinging sight that oscelates without your guidance. The strongest and most difficult to use is the rhythm gun, which changes from simple shots to flaming projectiles if you hit the fire button in time with the arrows that bounce along to the music at the bottom of the screen. Each and every one of them is stronger than Pea Shooter, but all come with caveats and will disappear if you get hit once. Thankfully, there are a lot that get dropped, so don’t be afraid to grab onto whatever gun floats your way and try it out for a bit.

It should be said that Catgirl Without Salad: Amuse-Bouche, despite being a fully fledged game, is almost depressingly short. You ultimately have three missions to accomplish, and then you can play the game again if you want. If you manage to not die once in the course of your bounty hunting, you’ll finish the whole thing in about 45 minutes. You can do it in a single sitting. You can beat this game before the next episode of Home Before Dark finishes (highly recommended, by the way). You could even challenge yourself and play the game upside down, in a mirror, or blindfolded to help maximize the replay value, but the super truth of it all is, like most great shmups, Kebako’s journey is a very short one, and players might feel hesitant to drop any amount of money on something that clocks in at under an hour. However, playing Catgirl Without Salad is a high quality experience, and I need to dissect why right this very second. 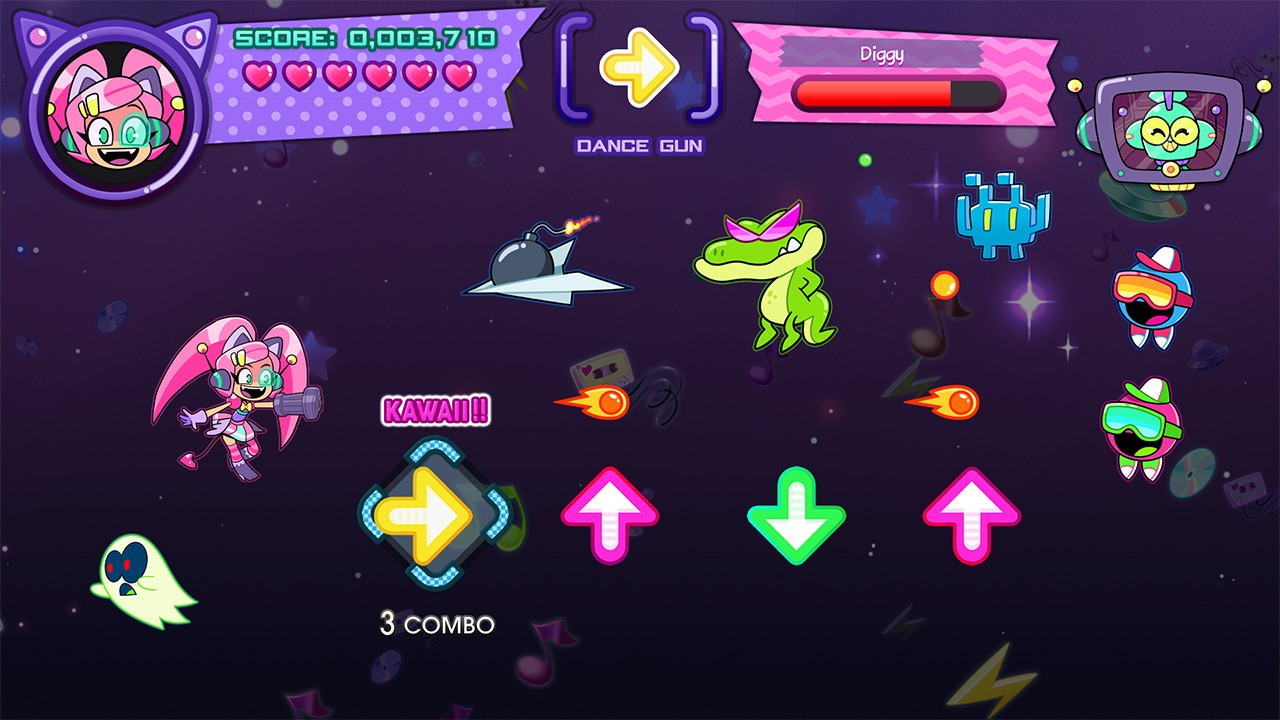 First and foremost, Wayforward has taken this silly little game and injected it with high octane humor, both absurdist and slapstick, and delivered it with the proud aura of a child who just baked their first cookies. Nothing about Catgirl Without Salad is done in a lackluster way. Each and every line of dialogue is voiced and delivered with the energy of a high school drama student doing their senior year show. Kebako positively explodes with energy and wackiness across the duration of the game, and she’s balanced by Squiddie’s innocent, calming demeanor that’s borderline straightman comedy. The portrait avatars near both Kebako and the boss’ health bars change facial expressions, body poses, and even break out of their frames during line delivery. It’s a delight to listen to from start to finish, and all the character’s insane expositions are boosted by great, poppy music that keep the upbeat anime feel of the game charging from start to finish.

Additionally, the game does deliver a good challenge in terms of shooting and running you over with its own mechanics. Drifting between different galaxies with different thematics, Kebako has to contend with a whole mess of foes that have different projectile waves and movement patterns. The enemies all have a different amount of HP, and they are equally adorable and deadly. The name of the game is to get on top of things and stay there, either with the Pea Shooter or mastery of another weapon. If you can pick off enemies as they appear, then it’s smooth sailing from start to finish, with the occasionally hiccup coming from bosses (I especially liked the Sephiroth inspired chef boss of mission 2). If you begin to allow multiple waves to appear, then you best pray you can pick up the food drops as fast as they come (DON’T GET SALAD KEBAKO HATES VEGETABLES) or you’ll get killed and need to start again from the beginning of the mission.

Look at Catgirl Without Salad as you might look at a great comedy movie. If you wanted to just waste time, you could easily load up a few episodes of a sitcom you’ve already seen, have a couple of chuckles, and call it a day. There are games that are maybe cheaper and longer, and they’re alright, you could get some fun out of them. But you have polished, thoughtful, and genuinely great excellence overflowing from Catgirl Without Salad. It showcases the boiled essence of what Wayforward can do with a clear vision and no clear path on how to get there, and it’s delightful, memorable, funny and a solid game to boot. You don’t just watch Law and Order and hope for a funny episode, you watch Police Squad and laugh the whole way through. If you’ve got the humor in your heart and an hour to dedicate to something great, then you deserve some Amuse-Bouche.

If you’ve got the humor in your heart and an hour to dedicate to something great, then you deserve some Amuse-Bouche.