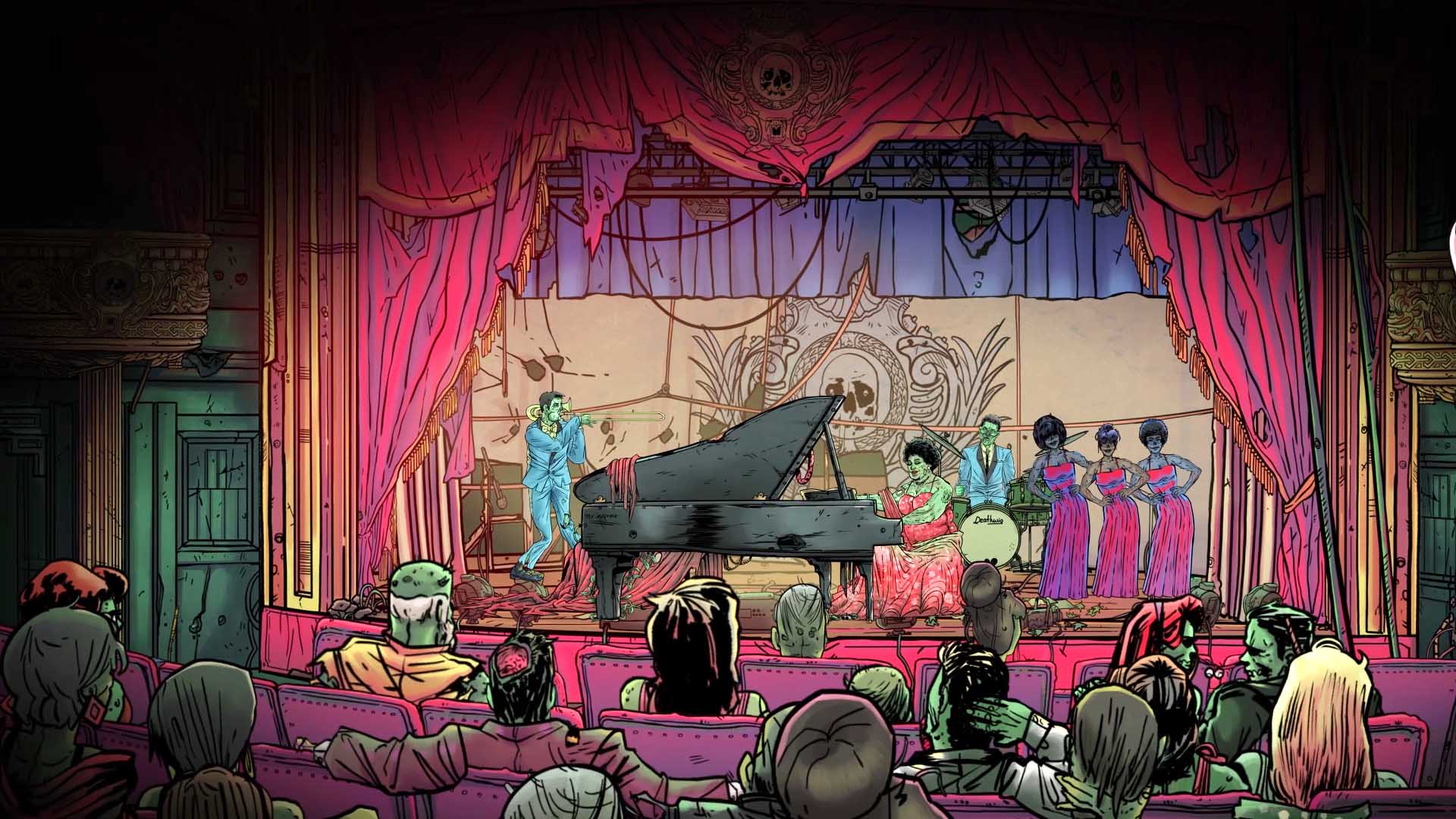 Outsider Games’ Wailing Heights takes the loveable parts of a musical and throws in some living dead characters and a spoonful of unexpected scenarios to create a delightful and humorous gaming experience.

The story begins when Frances “Bite Me” Finklestein, a manager and last living member of popular 60s band called The Deadbeats, mysteriously lands up in a gated community called Wailing Heights. Under normal circumstances this wouldn’t be that big of a deal, unfortunately, Wailing Heights is anything but normal. Finklestein awakens in a jail cell and has the bad luck of being a living body in a town of deceased inhabitants. To make matters worse the only hope Finklestein has is a ghost lawyer by the name of Soul Ghoulman who reckons it will take approximately 80 years to get the human out of prison. It isn’t until a mysterious stranger offers Finklestein a peculiar way out, that the true madness of Wailing Heights begins. Finklestein sets off to get the unexpected reunion with her former bandmates, the Deadbeats (literally so).

Wailing Heights is a unique little town where the dead end up as either ghost, werewolf, vampire or zombie. Each group has their own hangout spot, inner cliques, and traits that give them their own sense of community. The werewolves are a rowdy bunch who love a good time in their bar, the vampires are the hipsters of the town, preferring sarcasm and cynicism as their language and despising anything deemed “retro,” the ghosts prefer to mind their own business and avoid unnecessary drama from the others, while the zombies are fans of music concerts and have their own little black market called the body shop. Each of these environments can be experienced as you progress throughout the game.

Wailing Heights is played in a scrolling style where players control the character by moving horizontally, backwards and forwards, and in some instances vertically. 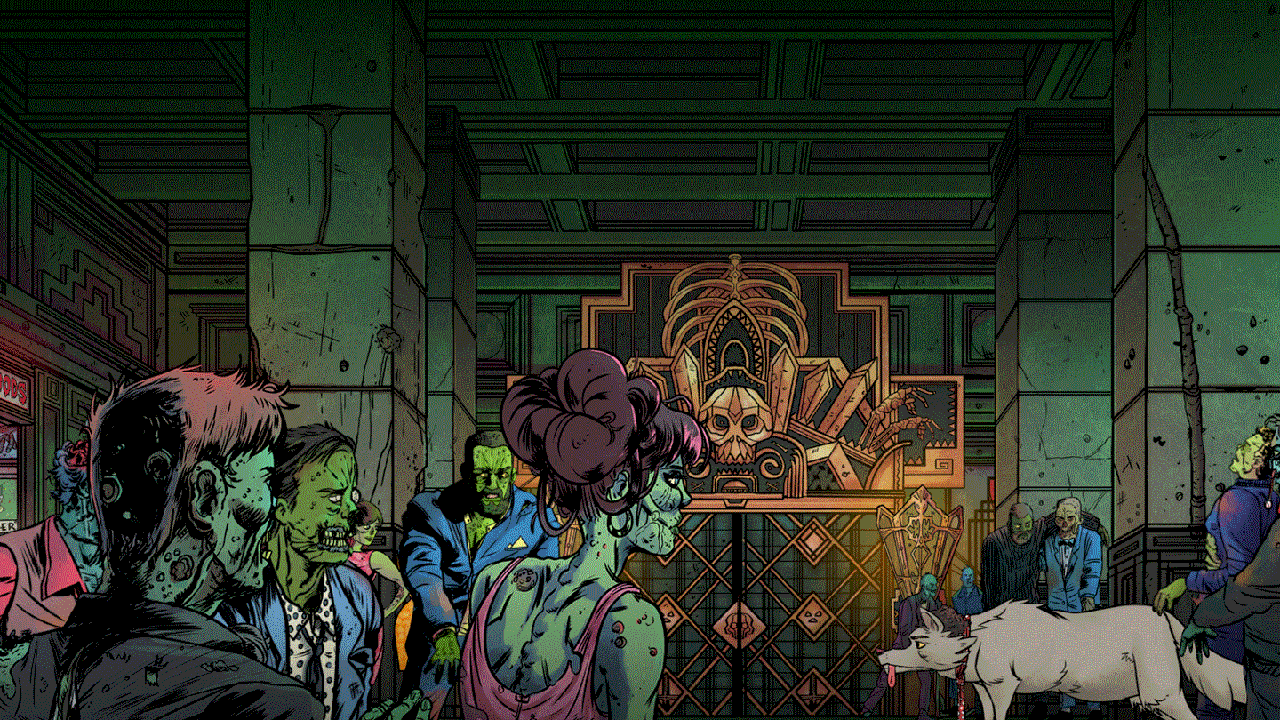 In Wailing Heights, you will get to interact with characters and objects by clicking when a bubble with “…” appears. Sometimes these bubbles will be for the character to express a thought or an observation. When it comes to conversation, the “…” bubble will appear over characters you can engage with. Conversation options are displayed in a cloud thought bubble until you select it, changing it to a speech bubble. Different conversation options can help you when trying to gather specific information, and although some may seem bothersome, they can surprisingly hold the answers you need to progress. So, take your time and get to know the folks of Wailing Heights.

As I mentioned, Finklestein was given a unique opportunity to escape jail – alive! This opportunity comes in the form of a possession wheel which enables you to possess working bodies, through a song, that can be used to achieve tasks and hopefully make out with a pulse.

Possessing a body is simple and all you need are three crucial pieces of info: what the character LOVES, HATES and their REAL NAME. This information can be acquired through conversations with them and others who know them, or even in the songs they sing. In some instances, you will have to physically acquire the items needed to complete the song. Once you’ve got all of that, you can sing your way into a body. A feature I enjoyed was the comic book origin story. Here you get to see the backstory of the character whose body you’ve possessed; this includes their past human life and how they came about to be what they now are in Wailing Heights. The characters are the highlight of this game for me. From a beta werewolf to a superstar zombie singer, and even a fraudster cop, there is never a dull moment in Wailing Heights.

The good news is that you can return to the bodies you’ve possessed before, which comes in handy when you realize that werewolves don’t like ghosts. Each type of body posses what is called a monster ability. For vampires, it means you can transform into a bat, and if you’re a ghost you can become invisible with spectre mode or become a dog when you’re a werewolf. The monster’s abilities allow you to move faster as well as do things other characters cannot.

I am personally not a fan of musicals (I have my reasons), but I enjoyed Wailing Heights as a musical. The original songs were funny and added relevant character to the game and the environments you got to explore. I appreciated how the songs served a purpose and not just some scene filler. Items that you will need in your possession wheel song can be extracted from songs that characters sing. Thankfully, these tracks were anything but boring. The zombie musical performances make no sense unless you are in a zombie’s body, and once you get in one, enjoy. 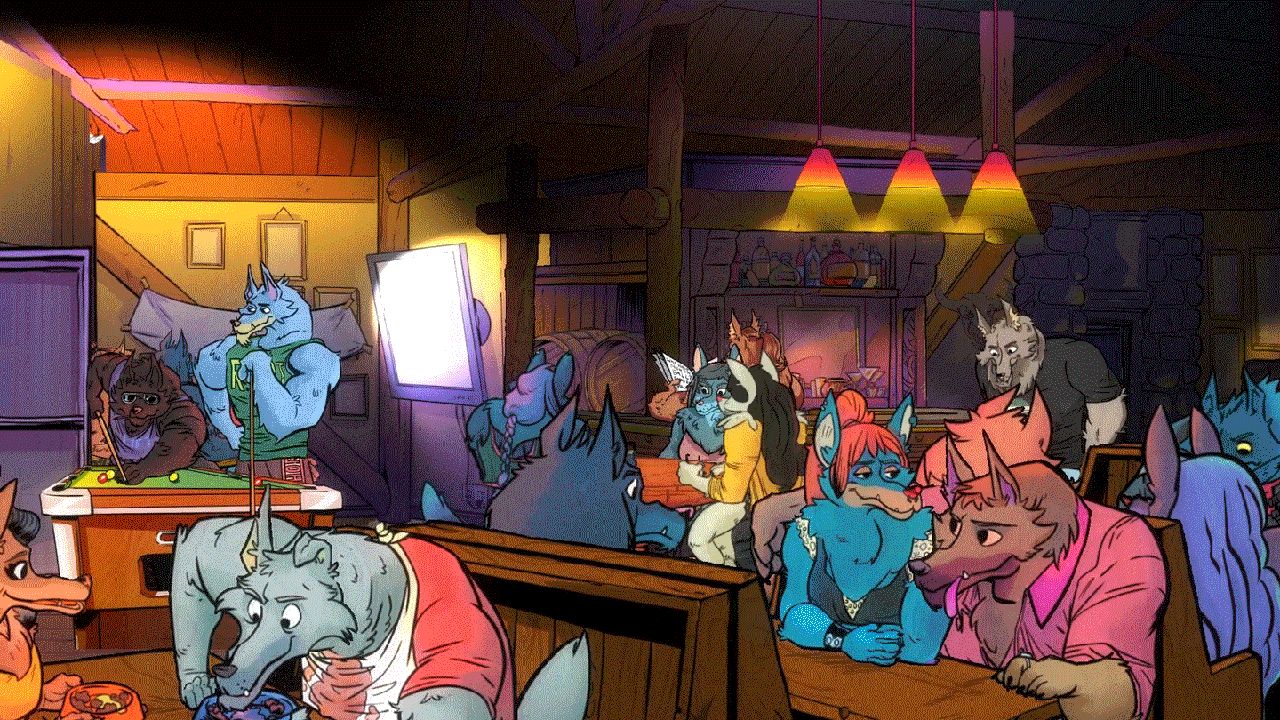 The 2D comic book style graphics of the game are nicely done in Wailing Heights. The buildings and environments are layered like that of a paper cut book, which I found poetic as the game’s story is just as filled with layers of its own. Each environment in Wailing Heights has its own aesthetic that fits its inhabitants. And depending on which mode you play your character in, the lighting and colours change accordingly as well. For example, everything becomes black and white when you’re in spectre mode or more vivid in colour when you are a bat.

There were some instances where my character would randomly disappear, get stuck or not move in the direction I needed, this required me to reload last saves. Thankfully, the Wailing Heights autosaves very frequently so the load would almost always be right where I left off. The load times were also short enough that these glitches weren’t too bothersome.

Overall, there was so much to enjoy with this game that for a second, I forgot about my real-life dislike of musicals. The characters, conversations and plot kept me engaged and far from bored.

Welcome to the charming community of Wailing Heights where everyone without a pulse is welcome. Oh, and did I mention this is a musical too?