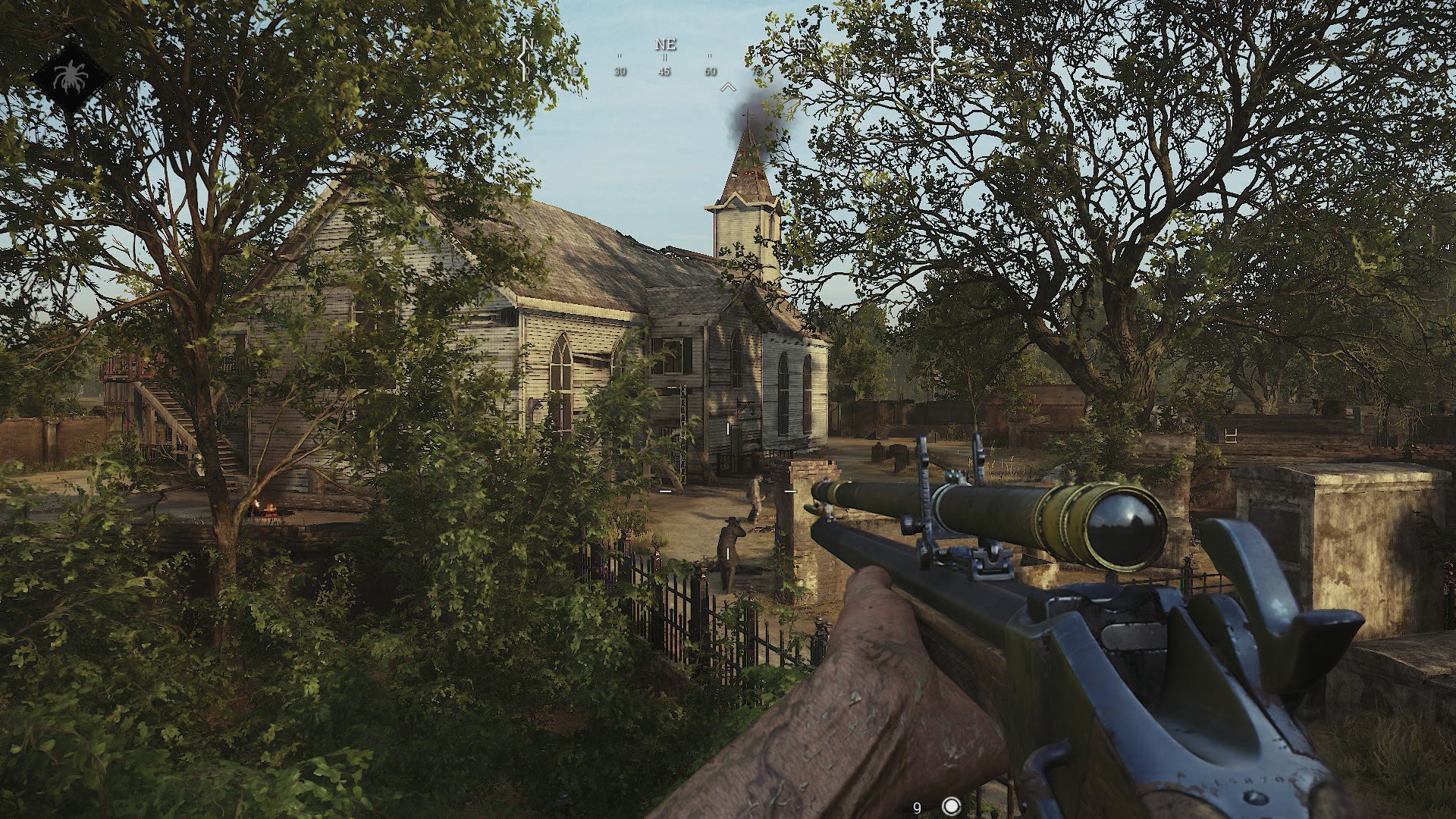 Battle royale games really are two a penny these days, every other release seems to be wanting to take its slice of the pie, so I’m always a bit dubious when I install another one to try. Hunt Showdown has been released on game preview for Xbox since May 2019, having previously been available on Steam in a preview program since February 2018. It would be fair to say the game has had plenty of time to gather a good following, and create an exciting premise to get you hooked. A competitive PvP 1st person shooter that has PvE elements, this horror title is set in the 1890s in the darkest corners of the world.

Developed by Crytek, this horror royale title doesn’t exactly follow the typical theme of others in the genre. First, let’s look at server size, unlike PUBG or Call of Duty Warzone, Hunt Showdown only allows 12 players to occupy a session, also NPCs are peppered around the gaming arena waiting to attack you if you approach or disturb them. The map that you play in isn’t exactly vast, so all the action takes place in close proximity, this ensures you are likely to cross paths with another player, just as long as the lobby is full. What makes this so nerve wracking is the feeling that anything can attack you at any time, there is no on screen HUD, players are not highlighted for you to see, you must use all your senses to hunt them down, if you wish to kill other people off. The NPC zombies are hungry to rip people’s faces off, so unless you are prepared to fight, I’d suggest a stealthy approach. The stealth approach is easier said than done as nearly all of the environment makes noise; snapping twigs, splashing through rivers and disturbing animals are all welcomed by a raucous racket. Human and computer players alike will be able to hear you, and will zone in on your position.

You play as a “Bloodline” bounty hunter, where your goal is to use a mystic dark vision power to find clues, or portal rifts and move to an end boss, or defend an energy wellspring. The gameplay is split between two game modes, bounty contract and quick play. The first is where you find clues, a session lasts around 30 to 40 minutes, and allows up to 12 players. The second is considerably quicker at only 15 minutes, and allows up to 10 players, this was where I spent most of my time.

Both modes follow the same gameplay model, with the exception that you must complete quick play solo. In bounty contract you can play in teams of 2 and 3, and this does make it considerably easier, I played this mode with my brother, we worked as a pair, which certainly took away some of the anxiety and fear, but also made the final battle simpler. The worry of instadeath is also removed as any of your team can take on the role of Florence Nightingale and bandage you up, very handy when being hunted is as likely as being the hunter.

The biggest risks aren’t the vanilla zombies who like all traditional abominations stand there moaning and await their fill of juicy brains, these guys are just the cannon fodder. The ones to note are the specialist breed, the juggernaut, the knife wielding maniac, and the poisonous being. These represent lessor versions of the big bosses. None of these should be taken for granted, and failure to treat them with respect could end your hunt before it has begun. 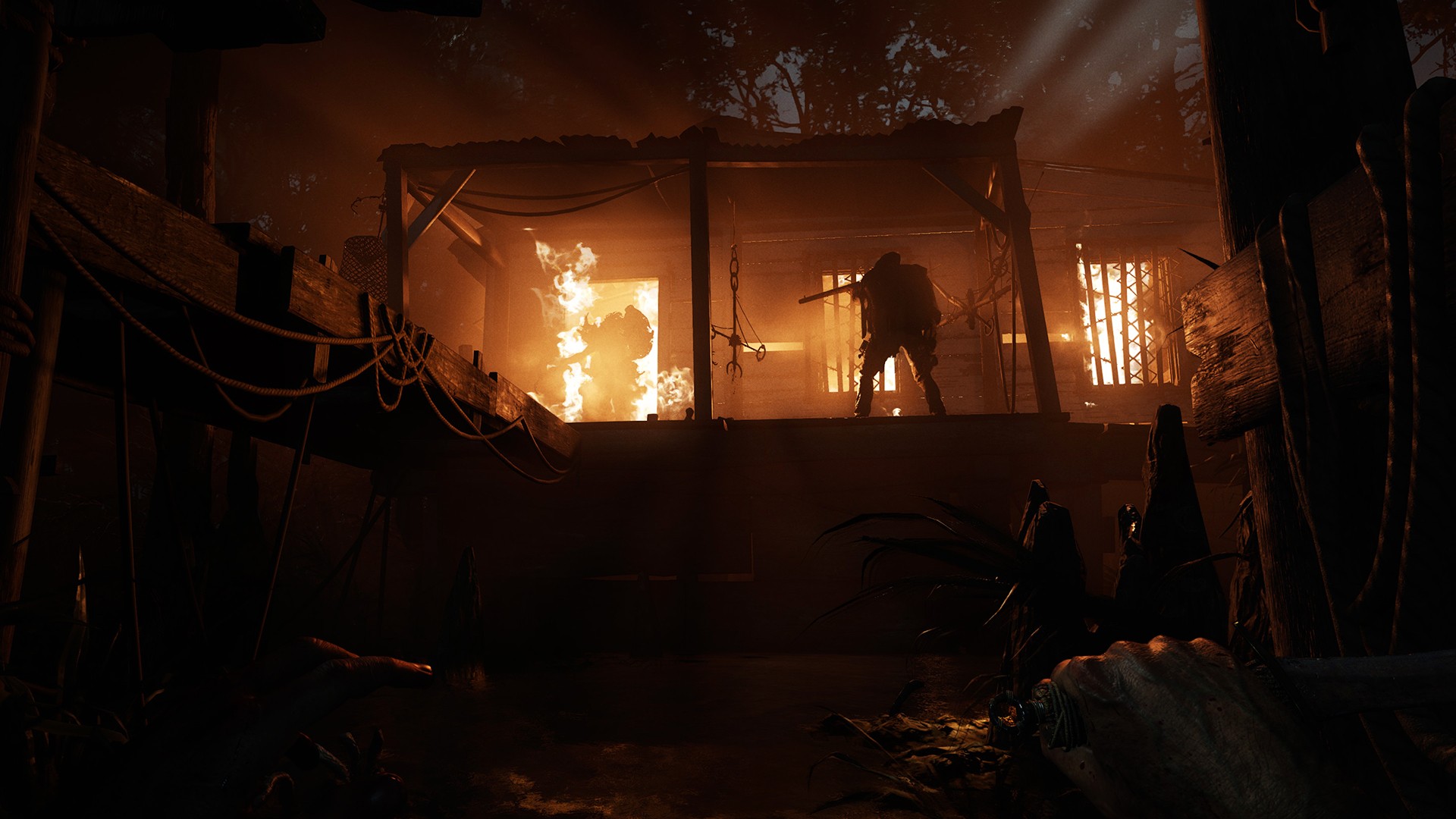 Your ultimate goal is to find the clues, challenge one of the 3 bosses, and banish their soul. This will award you with a bounty token which you must take to an extraction point, all of this must be completed while other gamers aim to kill you. The 3 bosses are as follows; “The Butcher”, “The Knife Wielding Assassin”, and “The Spider”. Each has its own unique method of attack, and you will find each will be easier or harder depending on your gameplay style. I personally detested “The Spider” it’s; fast, accurate, and blends into the background. If we managed as a team to survive its poisonous approach, then we were almost certain to be hunted by everyone else. It created the perfect storm of anxiety and hatred. Once the battle was complete, you must start the banishing, here you must wait 2 agonising minutes, defending the area in which you have just battled. To make matters worse, anyone left in the lobby will be able to see you using their dark vision, if they wish to collect the bounty, without all the hard work, now is the time. Crytek made an exceptionally tense and paranoid ending to each stage, no matter how many times I completed this section, my heart would always be racing, just awaiting the sound of someone’s rifle as I’m shot in the back as I looked to escape the desolate land by means of one of the extraction points..

You may be thinking, so what if someone kills you, just load into another game, dust yourself down and get on with it! Hunt Showdown follows a very similar style to another game that I’ve spent some time playing, and that is Vigor. The similarities are; the limited number servers, the ability to scavenge and keep the items you find, you can leave a game with no penalty if it’s too tough, and finally if you die you lose all your inventory. Hunt Showdown goes one step further to up the ante. If you happen to get annihilated, and your character is level 10 or higher, then you lose them forever. They end up going to the hunting land in the sky, and you have to start all over again. It’s a lot to lose, and really ramps up the pressure when you are thinking of taking that contract home.

A disturbingly dark title that fills you with dread at every turn. The developers have done well with their use of colours and shade to emphasise the daunting atmosphere that the game generates. The simple User Interface allows the player to focus all their energies on the task at hand while trying to survive. The environment is realistic, and the ripples in the water as you wade through shows the level of attention to detail that you’d expect to find in a triple A title. The character models are good and the NPC’s are genuinely disturbing. When you change from normal view, to dark vision the instantaneous monochromatic colour palette is crisp. The only exception is the highlighted blue hue that indicates the location of the quest item, it’s easy to spot and ensures that the game flows nicely.

The audio really gets the heart pumping, as the game loaded in, it reminded me of a Quentin Tarantino film. Like with most other battle royale games, the audio is dominated by sound effects, you don’t really want to be fighting for your life, while listening to music no matter how great it is. The continual noise of the zombies is enough to make you worried, if you are not observant enough the sudden flapping of a flock of birds who you’ve unwittingly disturbed, can very nearly put you over the edge. Distant gunshots that will gradually get louder will make you question your safety, the question you ask yourself, has the hunter now turned to the prey? The visual and sound aspects work in perfect harmony, creating an experience that is both tense and nerve wracking. 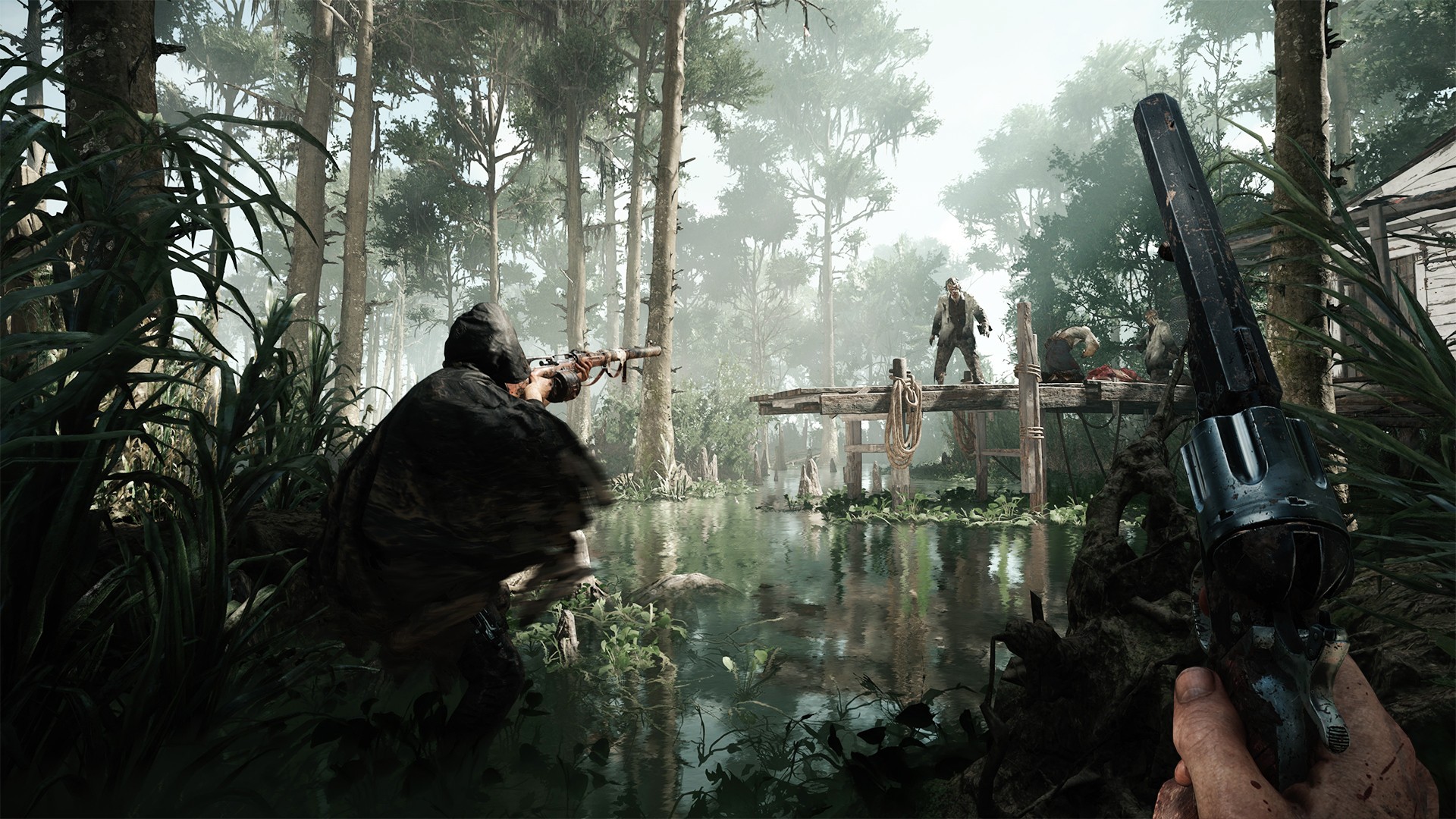 Like most first person shooters, there is an expectation that the controls will be responsive and well laid out. Hunt Showdown didn’t disappoint. The button mapping is simple, aiming any weapon is accurate, and the inventory menus are easy to navigate. If you are familiar with any game in this genre, then you are going to feel right at home. Ultimately Crytek has done a great job of focusing on the basics, this in turn allows gamers just to focus on playing.

There really is a lot to do; player and weapon levelling, the “Bloodline” for each hunter goes up to level 100, character prestige for those wishing to try it all again, daily tasks for XP boosts, 2 different game modes, 3 different bosses to study and defeat, players to hunt and avoid, and that’s all before you start looking at the achievement list. I’m struggling to put a number on how many hours you will have to put into complete this, but like most titles in this field, you’ll either love it or hate it. If you do happen to love it, then time will go out of the window, and you will become borderline obsessed.

For all of its positives, and there really is a lot, there are a few negatives. Don’t expect to turn the game on and jump straight into the action, it won’t happen, for some unknown reason it takes an eternity to load in, minutes pass by and the only action that you’ve seen is the loading wheel moving. The second issue relates to something that I have already mentioned, and that is the player base. The game should have a strong following, but this isn’t the case, every time I logged in hardly anyone was playing. There are so few players that I was never able to join my European server of choice, I was only able to join an American server, and when I did join a lobby it wasn’t even half full. This certainly limited my experience and probably didn’t allow the game to fulfil its full potential.

With only 2 drawbacks during my time playing this, I have to say overall it’s a success, with no offline mode, and so many battle royale games I did think that this was just going to be another poor replica of PUBG, albeit on a much smaller scale. I’m glad that my scepticism was wrong as this was a unique twist on a rather tried and tested genre. With so many heart stopping scare moments, this works as well as a horror as it does a 1st person shooter. You may find that after a session a new pair of underwear is required, as this is one genuinely scary game. My brother decided that he wanted to add his opinion to this review, so as not to disappoint him here we have a review within a review, and it goes as follows. “It’s good” so there we have it, a man of few words, but what he says is true, and the sentiment is well placed. Hunt Showdown is well worth trying, if the player base expands, then this could follow in the footsteps of PUBG and COD Warzone. A sleeper title that is a bit of a hidden gem for those who want a more intimate experience. Level up your “Bloodline” and be the bounty hunter you are destined to be, just ensure that you are always on the right side of the hunt.

Battle royale with a twist. Can you become the “Bloodline” bounty hunter you are destined to be? Go out and hunt, but beware! Do not become the hunted!

Video and audio work perfectly together.
Responsive and easy controls.
Easy to learn.
Lots to do, as long as you fall for its charms.

Slow to load in.
A limited player base restricts the playing experience.