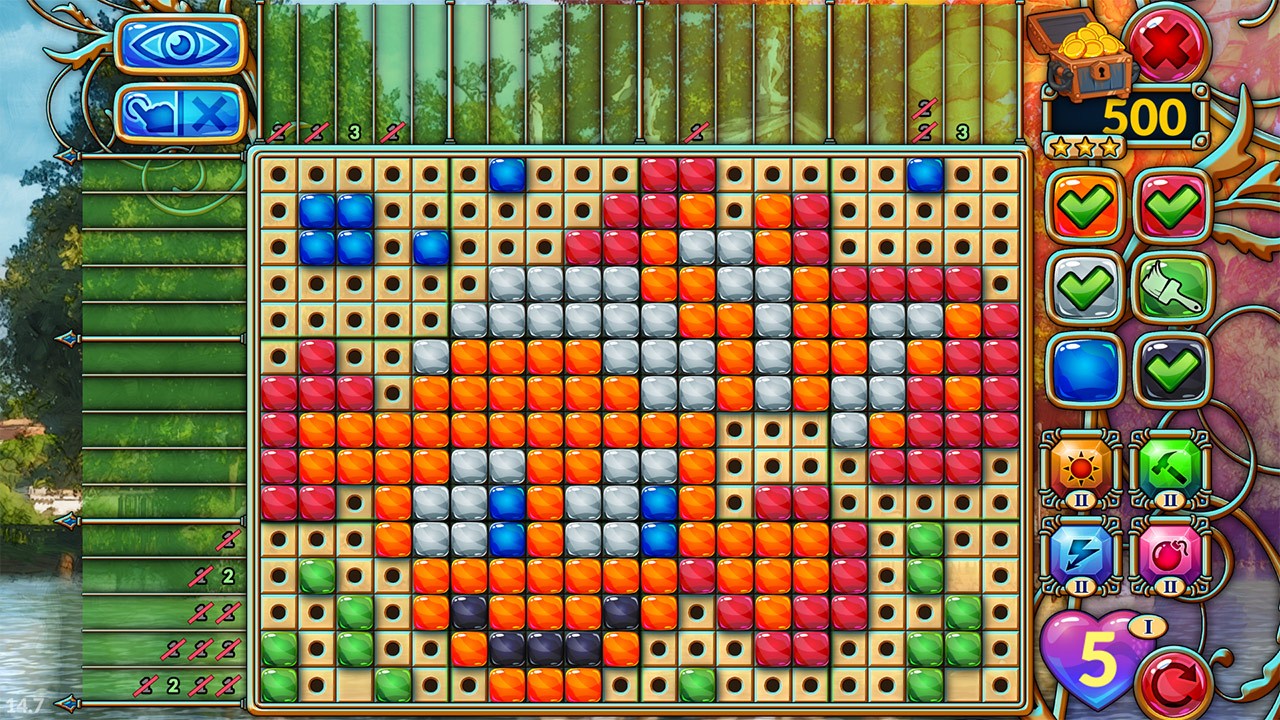 Love them or loathe them, you can’t deny that there’s definitely a market for puzzle games within the digital market. From wordsearches to crosswords and hidden objects to picross, the games within its genre do offer a nice break from the norm and offer a relaxing break from many of the adrenaline-fuelled triple A’s that comprise our libraries. For me personally, I find puzzle games to be a nice way to end the day, usually spending my last hour of each day of video gaming with a slow paced brain teaser before turning into bed. I also tend to make Picross my puzzle of choice and the latest of such games that I’ve been indulging myself in, comes in the form of JetDogs’ Travel Mosaics 2: Roman Holidays as it jets off on vacation to release upon the Nintendo Switch.

If you’re familiar with the concept of nonograms, or picross, style puzzles, then the layout here will be instantly recognisable. If you’ve never experienced a picross puzzle before though, then it comprises of a grid of varying sizes that contains a variety of numbers that run along a vertical and horizontal axis. Each of the numbers denote a value that relates to the number of blocks, along each of its axis, that need to filled in with a solid block or an X to mark an empty space. Once all of the values have been placed, the blocks inside each grid form to create a picture. It’s a classic formula and one that is extremely popular; providing a good past time for puzzlers the world over to indulge in.

With Travel Mosaics 2 however, it brings something different to the formula, adding layers to the fold, one for each colour to add a touch of depth and challenge to the proceedings. If it all sounds a bit heady though, then fear not, as three difficulty levels creates a formula that makes the game accessible to all gamers; whatever your level of experience. For beginners, the game does away with the separate layers of colour, to produce one layer upon which to solve the puzzles. The normal and hard levels work around a series of layers to add and mix colour; providing a good challenge for intermediates and experts alike. 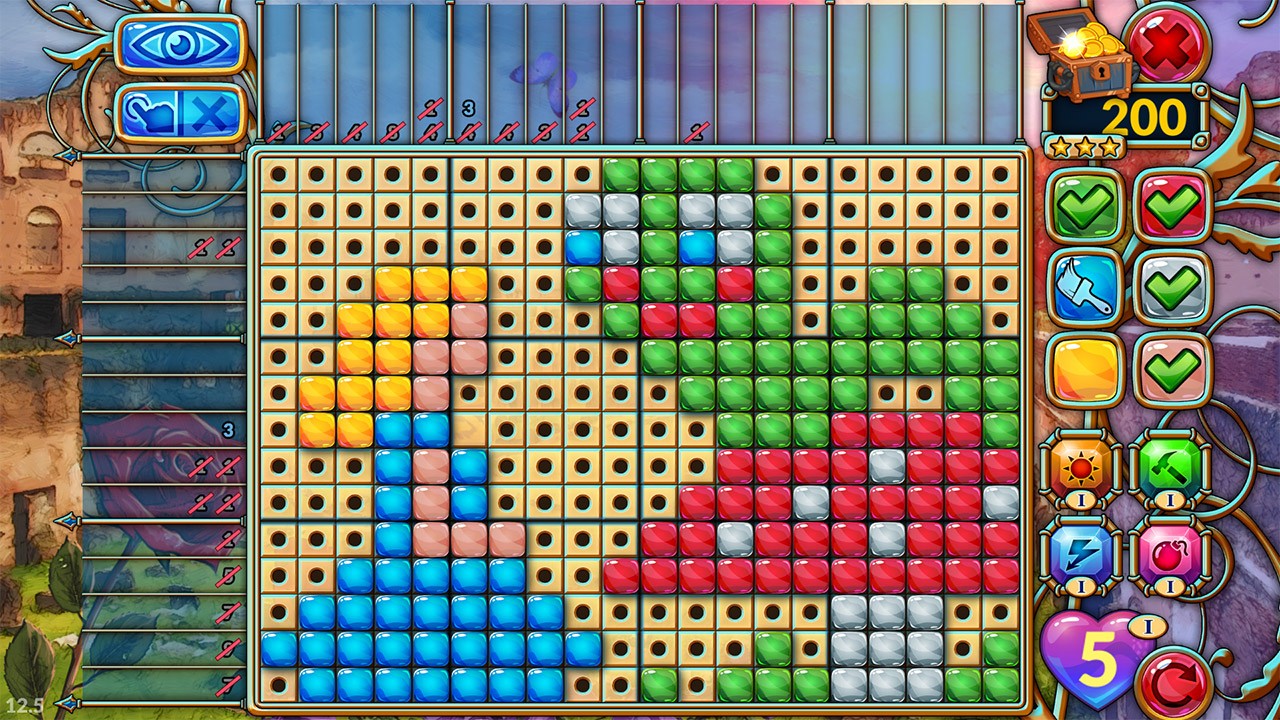 Another area where the game brings something different to the table, is in its ability to add helpful hints, or abilities, that reveal certain blocks, areas or colours should you find yourself stuck on your next move. As you begin to work out the plot points of where to place your blocks, you start to uncover random blocks that builds a number of gauges. Once filled, you can then select one of four abilities with the D-Pad, each one either filling in a random square, exploding revealed squares to paint in some blanks, a colour selection that reveals surrounding blocks of the same colour and a cross shaped icon that reveals all blank squares within its shape. These helpful abilities also work to give new players a helping hand.

Each of the puzzles also come with a number of lives, as well as a three star rating dependent on your performance with solving each scenario. Complete the puzzle and you gain one star, finish it with one mistake and you get two stars and complete it with no errors and you get three stars. These stars also accrue to unlock further levels and puzzles. However, should you make a mistake, then you not only drop a star, but you also lose a life. Lose all of your lives and you can’t continue with the puzzle. However, in order to give you another chance towards completion, the game presents you with a quiz that is based around the iconic location that the puzzle’s background presently represents. Answer correctly and you win an extra life. 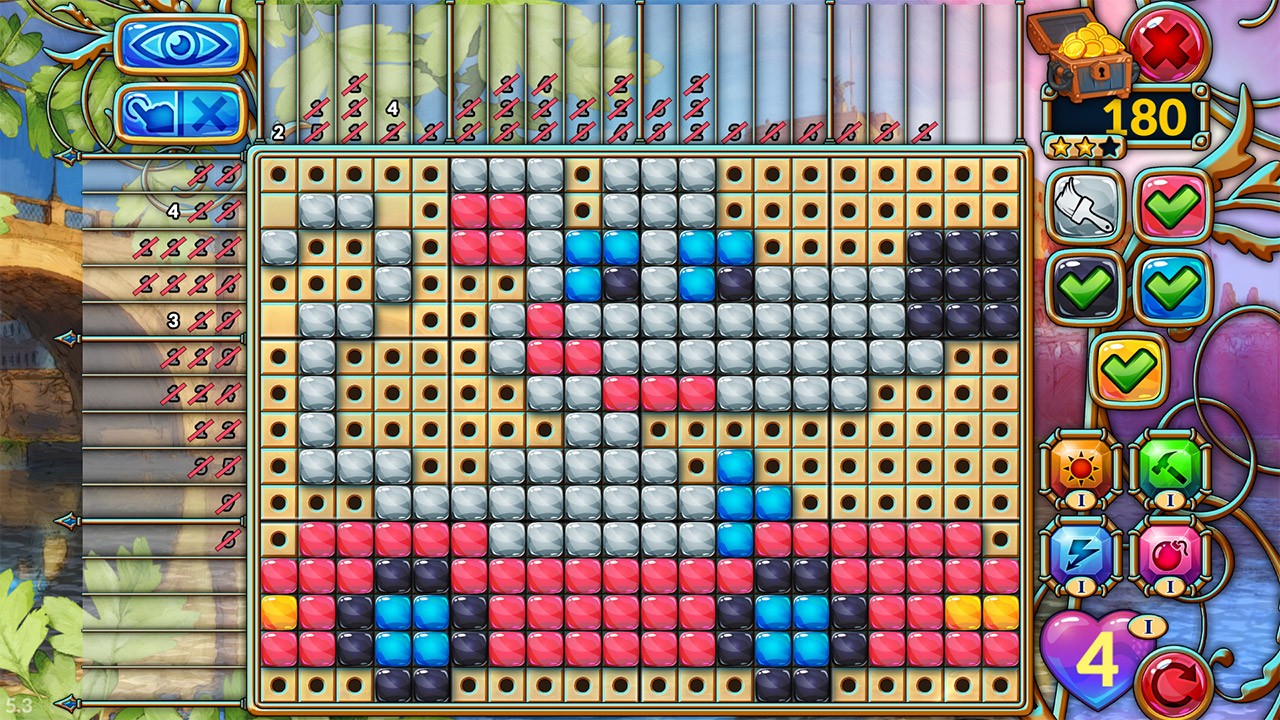 Should you gain at least two stars for each puzzle within the current location, you then unlock a sliding jigsaw puzzle that represents a photograph of the Walker family, the game’s resident characters, and their vacation to the Italian capital, Rome. Once all of these criteria are met, you then advance onto the next location and a new set of puzzles. As you complete puzzles, you also gain monetary rewards. These can be used to purchase objects that display themselves within a family portrait of the Walkers. It does go some way to present an incentive for prolonged play, but for me, it’s all about the completion of each puzzle, rather than buying cosmetic goods to complete a photo; although its always nice to have extra options.

If there’s one aspect that I didn’t really like about the game, it’s that each of the nonograms, or puzzles representations upon completion aren’t necessarily to do with the game’s subject matter. At least, that was the impression I got. After all, I’m not convinced that a carrot has anything to do with the Coliseum, but then again, I could be wrong. After all, I’m not that advanced, culturally, to know. However, what the game does do well, is produce a fine balance within the challenge of the game. None of the puzzles were ever frustratingly difficult and although some were challenging, they were also fun to work out and complete.

Overall, Travel Mosaics 2: Roman Holiday offers a nice selection of over 160 puzzles for the puzzling connoisseur; especially if you’ve also got a love of all things Rome. Its variety of puzzles, nice-looking backdrops and balanced challenge makes this an ideal game for beginners and veterans alike and with three levels of difficulty, hint abilities and layered puzzles, makes for the one of the more interesting puzzle game in which to delve into. Couple this with a nice pocket-money price, you’re certainly getting lot of bang for your buck. Its whole level of presentation elevate this title from being just your average puzzle game to something that more represents a gladiatorial game within an arena of puzzles.

Take a break and enjoy the Walkers’ vacation through a set of interesting puzzles within Travel Mosaics 2: Roman Holiday.