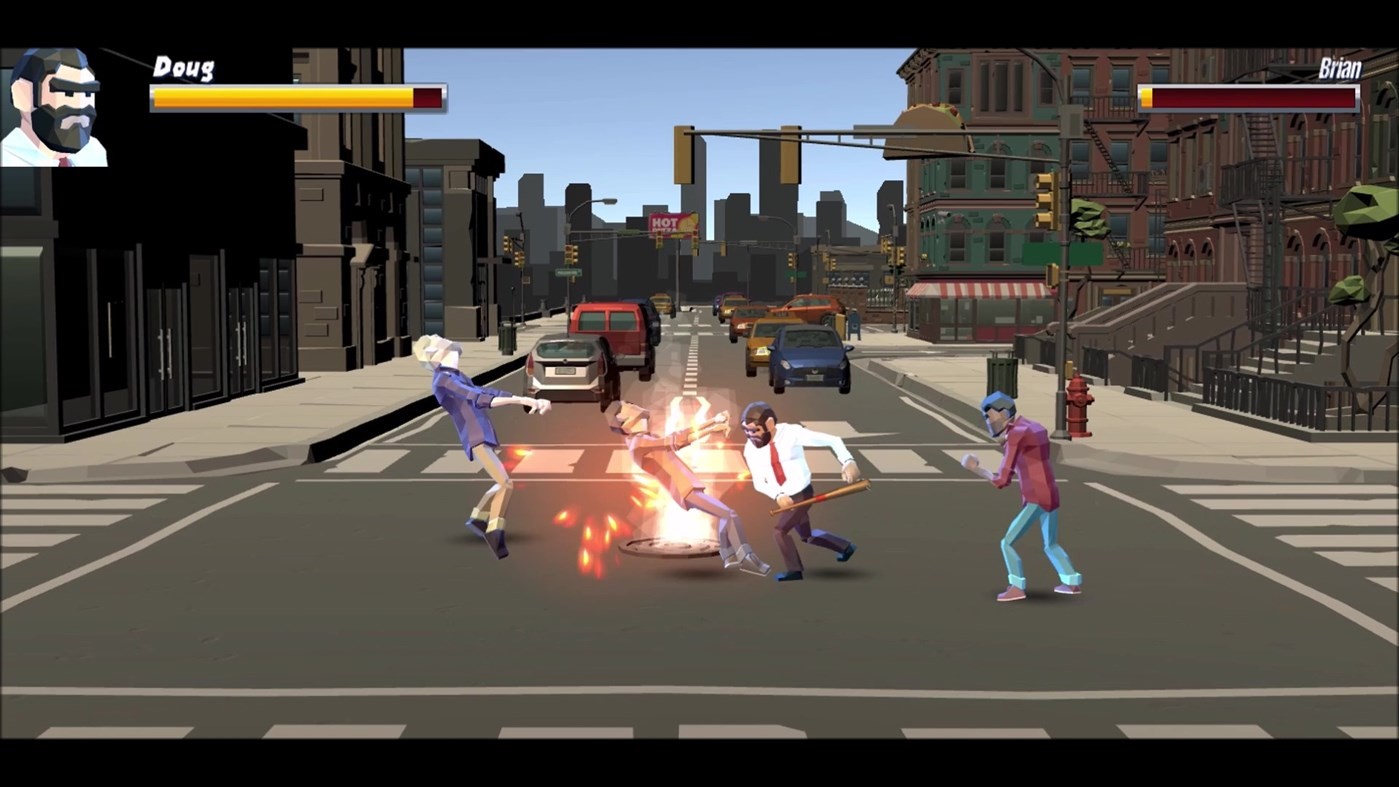 Stuck in a rut? Do you work a mundane 9 to 5 job with someone you hate as your boss? This is the life of Doug and guess what? Doug Hates his Job! This is a 3rd person adult comedy beat-em up, come several other genres from the Developers Super Villain Games. So unlike Doug, will you end up enjoying this title? Or will you be miserable and want it to be deleted from your hard drive?

From the outset, the scene is set with dark humour, cynicism and dad jokes galore. Most people who have worked in dull jobs will be able to relate to it. The story reflects on life in an office, and how the management – Mr Smith, uses the lowly workers to feather his own nest. Doug has had enough and spends his time creating plans so that he can leave. The storyline is random and bizarre. Narrative options allow you to choose your own fate, certain responses will skip the game forward, and you could find that you avoid large sections of the game. If you happen to select all of the “correct” responses, you will potentially travel through several different areas, such as a bank, wild west scene, and office battles. You can also find yourself in a zombie outbreak, battling the elderly, work colleagues or avoiding snakes and killer printers, as I said its random and doesn’t really make any sense. Doug is like the latest version of Chuck Norris, when he gets going he is absolutely unstoppable, enemies fall at his feet as he punches, and roundhouse kicks his opponents until victory is all but assured.

You start your adventure sat at your desk, Doug wishes the minutes and hours away, begging for it to be the weekend. Mr Smith dashes his hopes, when he demands that he works through the weekend, this is the straw that broke the camels back. You quit your job and from here you run through a short tutorial, this introduces you to the basic gameplay mechanics and your first boss fight. Once you are successful you will realise that this was all just a dream and your dreary life must carry on. As you begin another day at your desk, you say enough is enough and you want that bonus that you have been promised. Your boss sends you on a wild goose chase, no one has ever survived the “blacklist” quest, and so begins the absurd and bizarre nature of Doug Hates His Job. Do not expect a logical storyline, or a thought provoking narrative, as there isn’t one. This doesn’t take away from the game, its just that it is clear from the writing that the developers are not taking themselves seriously and I have to say I enjoyed every second of it. I also loved the mocking of modern games and a few lines about Doug’s wasted life on computer games, it adds to the witty writing by the developers. 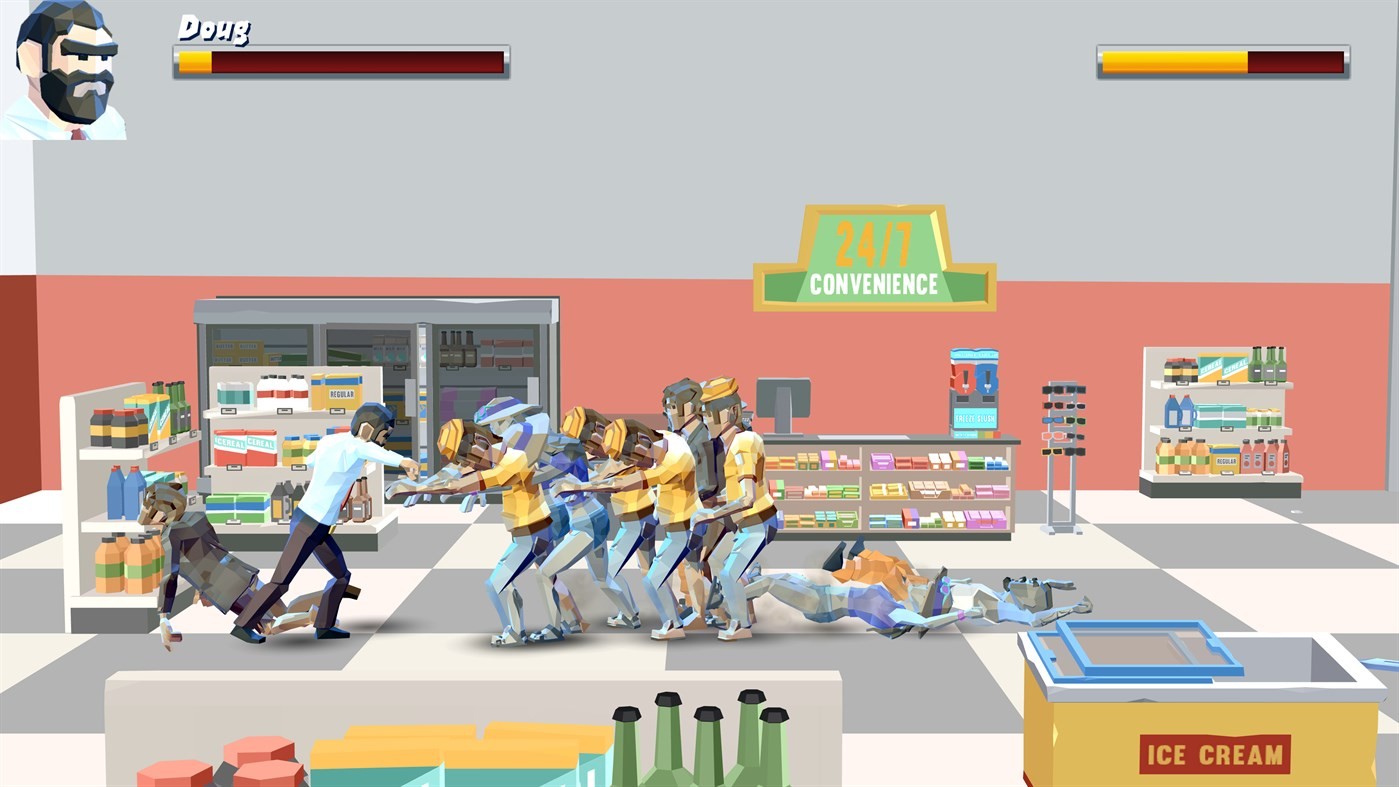 The gameplay itself is not particularly challenging, but against the mini bosses/boss fights you may find the game mechanics a bit frustrating, at times it wasn’t clear if you were in line to hit the enemy, I found that I would miss and then be pummelled to death. The saving grace was how quick the game reloaded, so even after being repeatedly smashed in the face by a giant American Football equipment wielding maniac, you would just dust yourself off and try again.

The game has several varieties of play styles, of which most people would be more accustom to seeing as a mobile game rather than a console release. You begin with a side scrolling beat-em up, which is reminiscent of Streets of Rage in both style and gameplay. The controls here are really simple, you can jump, sprint, kick and punch. As you progress through the levels the enemies get slightly tougher and you will be introduced to moving objects that cause you damage. This then moves on to a simple driving game where you aim is to avoid cars by moving left to right. You can take part in a stealth mini-game where you need to avoid staff members, a shooting game similar to an arcade shoot-em up. The final two elements are a pub quiz which has multiple choice questions, and a platform level, where you have to avoid poisonous snakes and eagles, as well as environmental hazards. Each game is very simple in its concept and it is this simplicity which I found fun. It took me back to the Mega Drive / SNES era where my gaming roots are set. For the gamer who has only ever experienced higher end games, they may be turned off by this. 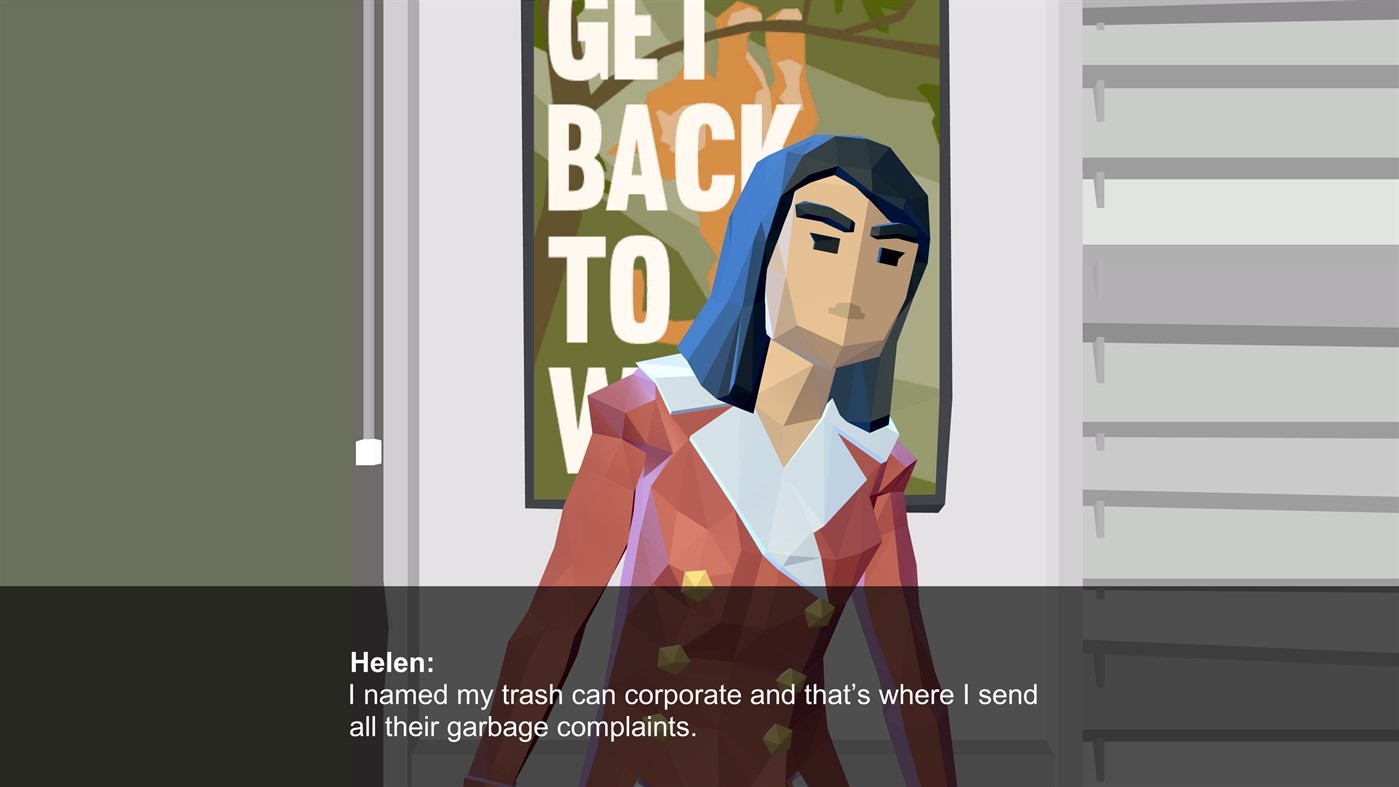 The graphics are not mind blowing, but they are crisp. The style is purposely set around an older graphical generation, they are basic but charming. Don’t expect smooth edges, it is jagged and fits with the look the developers were portraying. The sound and music choice again works well with a title from this genre. You will have Country music for the Wild West scene, Rock and Roll for when you are beating people up, it all fits in a weird and wonderful mashup.

For completionist’s this game is a dream, it can be 100% completed in under an hour if you make all the right choices. You will find there are two choices on each narrative and if you so happen to avoid an action that hits the criteria to unlock the achievement, the game is so quick that you can play through it again.

My biggest gripe with the game was the length, I was just getting to know Doug and his work colleagues, watching how they have unique quirks just like a real office setting and then it all ended. I would have liked more time in the other play styles rather than 80% within the beat-em up style, but I’m sure I can wait till Doug finds another job that he hates to play through the sequel. I didn’t really know what to expect when I played this game, but what I found was a charming, witty title that tickled the childish humour inside me. It allowed me to not have to concentrate and just enjoy the quick ride that played out in front of me. I just have to remember not to try Doug’s style when dealing with my own boss!

A mindless, witty and charming Indie game that has a premise most people will relate to. A completionists dream with a quick and easy list, I just wish it went on for a bit longer.