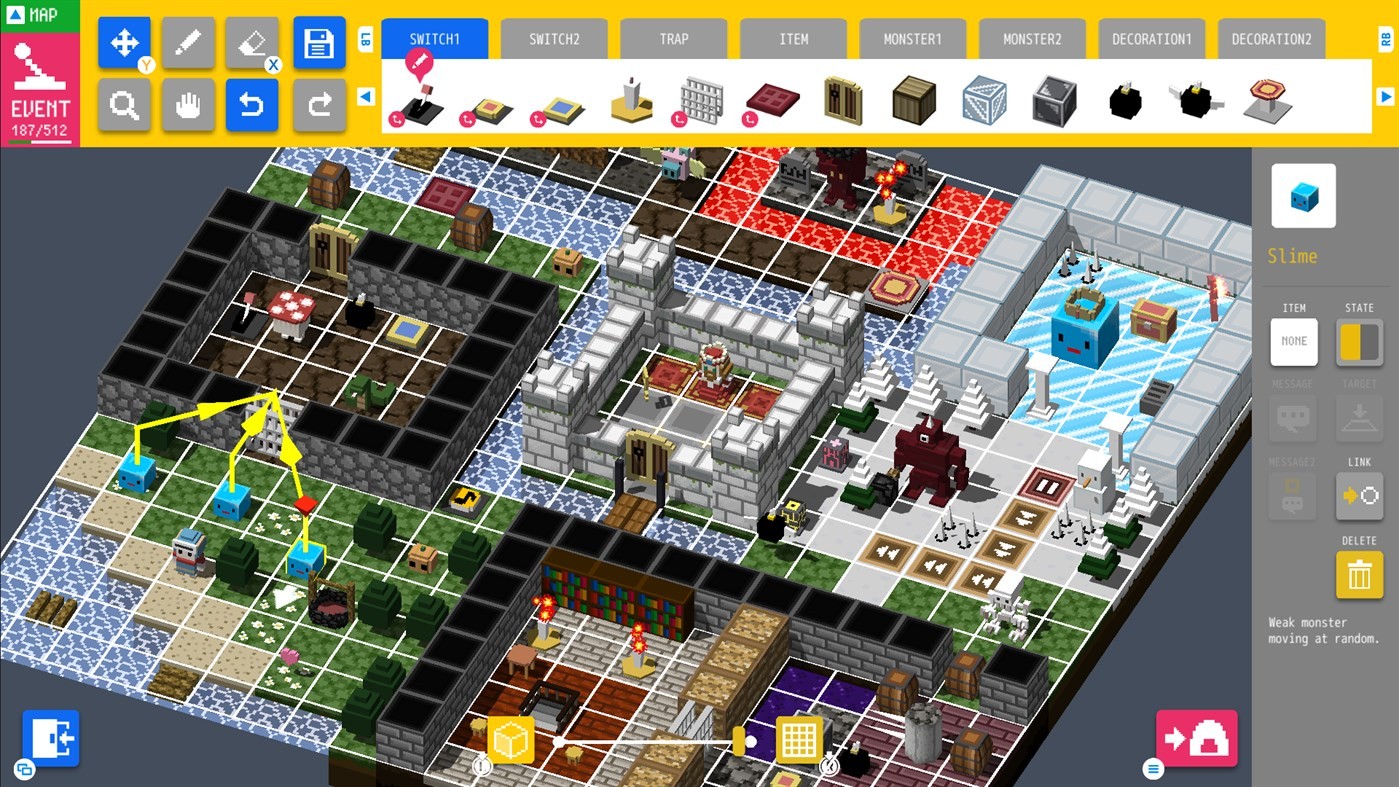 Do you have aspirations to be a game designer? Ever wondered what it would be like to create your own dungeon, and challenge others to complete it? Or simply thought I can do better than this game developer? Well, now is your chance! BlockQuest Maker by developers Wonderland Kazkiri Inc tasks you with two roles: A “Diver” and a “Builder”. “Divers” are the true heroes, they must venture into the unknown. “Builders” are the creators, you are given all the in-game structures and items to build the dungeon of your dreams.

This creative dungeon crawler has the community at the heart of its gaming premise. The developers have created a select number of levels that act as a tutorial, this will be your first port of call, from here you will learn about the main gaming mechanics. Once you finish this you are then free to explore other player’s creations, complete any one of the 150 challenges, or design a devilishly difficult world for others to complete.

The level creator seemed a little daunting at first, a short explanation left me with a vague idea of what to do, but there was a lot of trial and error. I personally would have preferred a little more hand holding, mainly because I wanted to be able to create something that used all the content. I guess spending enough time experimenting would have enabled me to become familiar with all the options available. Some of the creations made by the other players were spectacularly challenging, it’s refreshing that a developer gives you the opportunity to build the playable content for their project, and I can see this part of the game getting bigger and bigger. It really was a plus point for BQM.

All the created content comes from gamers all around the globe, and as such all the instructions are conveyed in numerous languages. This led to a rather difficult problem, Wonderland Kazkiri Inc failed to place a translator in the playable world. I found that I tried an awful lot of dungeons and I’d guess around 99% had instructions in a language that I couldn’t understand. This for me ruined the community feel that the developers had worked so hard to incorporate. I was left admiring the craftsmanship, but with no clue as to how I should tackle the challenges in front of me, I was left frustrated. I found that most created worlds had to be aborted as it was impossible to understand how to finish each one. The few dungeons that I was able to play and complete were fantastic, original and great fun. This to me showed that the gaming principle worked, but with so many barriers in place at the moment, this element of the game is likely to fail. 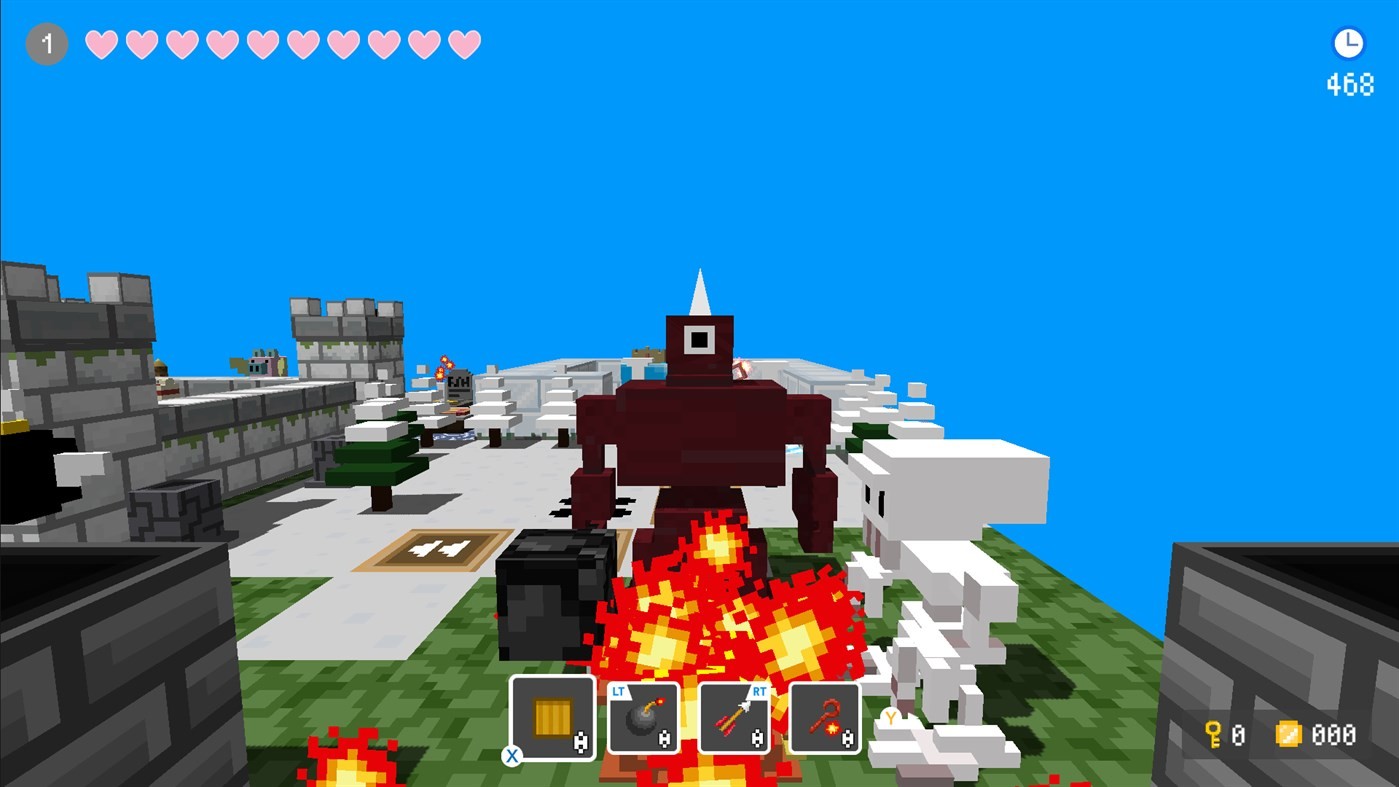 The final mode available was the preset challenges. These were set on a very gradual difficulty curve, the opening levels were so easy that as a player you found yourself laughing at the simplicity. The smile was soon wiped off my face, and the laughter was a distant memory as I tried to complete each later stage. In-game progress was as slow as trying to wade through quicksand. I found it quite the sadistic pleasure as I slowly worked through each problem, and overcame each section, this for me is a sign of a great puzzle RPG. Playing this mode helped me to understand how certain items worked, which then helped me develop more in-depth creations in the builder mode.

Like a number of Indie titles, the developers have pushed gameplay to the forefront, sacrificing the image and graphics quality on the way. BQM is a Voxel themed title with a tabletop view, the world is unfortunately a little rough around the edges, and some of the designs are tough to identify. If you happen to play Minecraft or any other Voxel inspired masterpiece, then you won’t be put off by this simplistic approach. The colours used are earthy, and match the damp and dank feeling of dungeon crawling. The perspective in which the action takes place works really well, a simple User Interface, and clear text narrative made the tasks easy to follow and complete. Overall the approach was a little too basic for my liking, and slightly below the standard I’d expect from a 2020 indie title. It did, however, run well, there were very few issues and certainly no graphical glitches.

The audio is probably the weakest link, the 8 bit sound emphasises the retro feel, which is great as it matches the style perfectly, but it is also truly annoying. As you move a noise that can only be described as NES Mario jumping accompanies you at all times, the almost pointless and fuzzy sounds of any other interaction water down the title’s other brilliant elements. Fortunately, the sound can be turned down to an almost inaudible volume as it has no bearing on gameplay whatsoever. All narration takes part via text, and there is no storyline to have to concentrate on. The music can be best described as nondescript and mostly forgettable, so much so that I had to view a gameplay clip from my Xbox dash to recall how bad it was.

I likened controlling my character around each of the dungeons to a ship captain trying to steer a tanker. The hero certainly isn’t the most agile of people, and he hasn’t been aided by the restriction of d-pad navigational movement. It didn’t detract from the game’s charms, and certainly doesn’t make it unplayable, it just took a bit of getting used to, and was frustrating when you forgot the limitations and fell into a river, or used the wrong item by accident. If I put the movement issue to one side, then it would be fair to say the rest of the setup is good. It was easy to use any weapon in hand, and utilising items to solve problems was straightforward enough. The dungeon design section was challenging to understand. The interface was confusing, and not very intuitive, but I’d recommend battling through. Once this mode clicks, you’ll find that it’s easy to navigate and relatively user friendly. 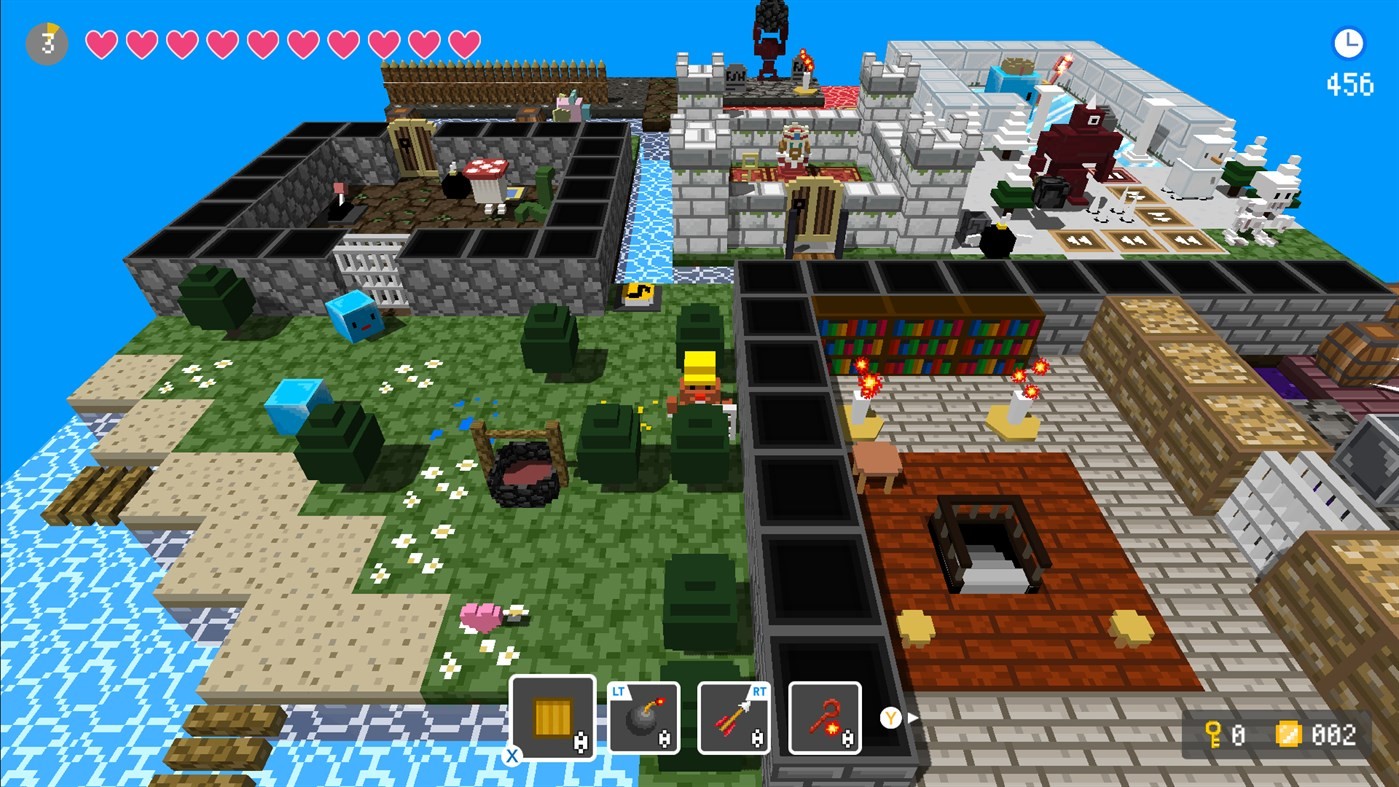 With three modes to choose from, 150 challenges that really do push you to work hard, 100 spaces to build dungeons, and 1000s of user generated content. BQM really has the potential to be a game that keeps going and going. If the fan base expands, and the developers keep adding items, then this has the potential to follow in the footsteps of Minecraft. Hours can simply fly by when putting together the most basic of designs. If you get hooked on this, then it’s going to represent incredible value for money; a simple achievement list will also reward you for your time and effort. I found the hard ones were awarded for completing the later parts of the challenge mode, so you will certainly have earned that gamerscore. A pretty causal gaming experience will allow you to drop in and out between games, this for me really adds to its replay value, as lots of gamers are restricted to short gaming sessions. You can play for 20 or 30 minutes, and find that you have progressed well within any mode that you are trying.

For a rather inexpensive title, I feel pretty harsh pointing out its few weak spots, but when one of them is based around the key principle of the game, then it’s hard to ignore it. A community based project should be about inclusion and freedom to create and explore. For the most part this has been a resounding success, that is all except the inclusion part. The language barrier made me feel alienated and lost. I was unable to enjoy what was touted as the top created levels, due to my inability to understand the basic design concept. This made me feel truly annoyed and frustrated, it could have simply been overcome with a translation tool, I hope this is added at a later date, as most of the ideas are so promising.

Very few games allow its player base to create its content, BQM certainly stood out from the crowd. The building mode will inspire a lot of would be developers to unleash their creative minds, and this makes for a very exciting prospect. If Wonderland Kazkiri Inc can overcome the few setbacks, and allow for Mod support then I believe this could be a title that has a bright future. It’s biggest positive is also its greatest negative, its community will be crying out for bigger and better creation tools, and if they can’t keep up with this demand the player base could turn toxic very quickly. If you have a creative flair, and fancy chancing your hand with someone else’s fancy work, then BlockQuest Maker could well be the game for you.

Time to put away your pencil and paper. Pick up your controller, and design the dungeon of your dreams.