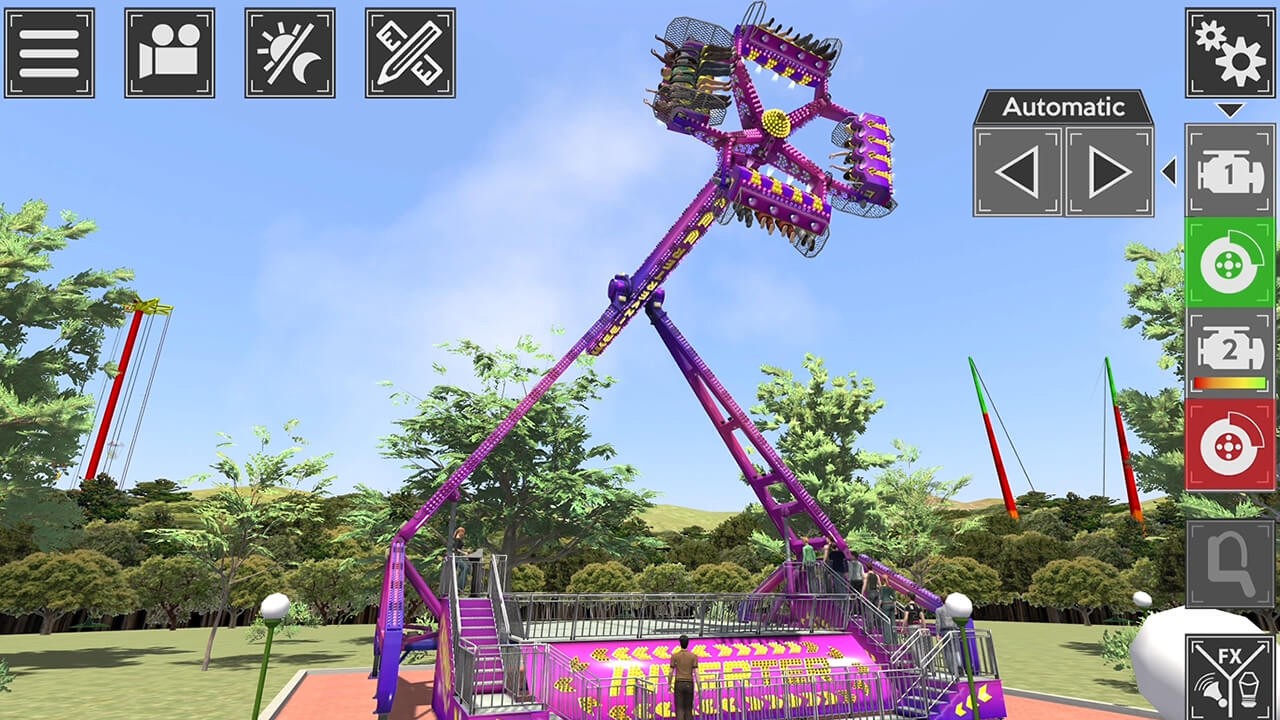 So, for a little back story. I had seen this title appear on my radar a week or so ago, but it wasn’t until seeing an article suggesting that “Rollercoaster Tycoon has a new rival” that I decided to take the bait and request a review copy. I’ve often dipped in and out of business management simulation games since the early day’s of “Theme Park” and was curious to see what made this stand out as a “rival.”

On reading the press release information I was curious, these seemed like named rides, could it be that you could recreate parks from around the world, similar to fan builds within previous game? Alas, no.

The basic premise here is in the word simulator. In reality, you aren’t really simulating a park, rather the individual rides within a park. The “game” has no goal, no antagonist, and no real reason to play, more it is a series of tools that can be applied to the real life workings of theme park machinery. 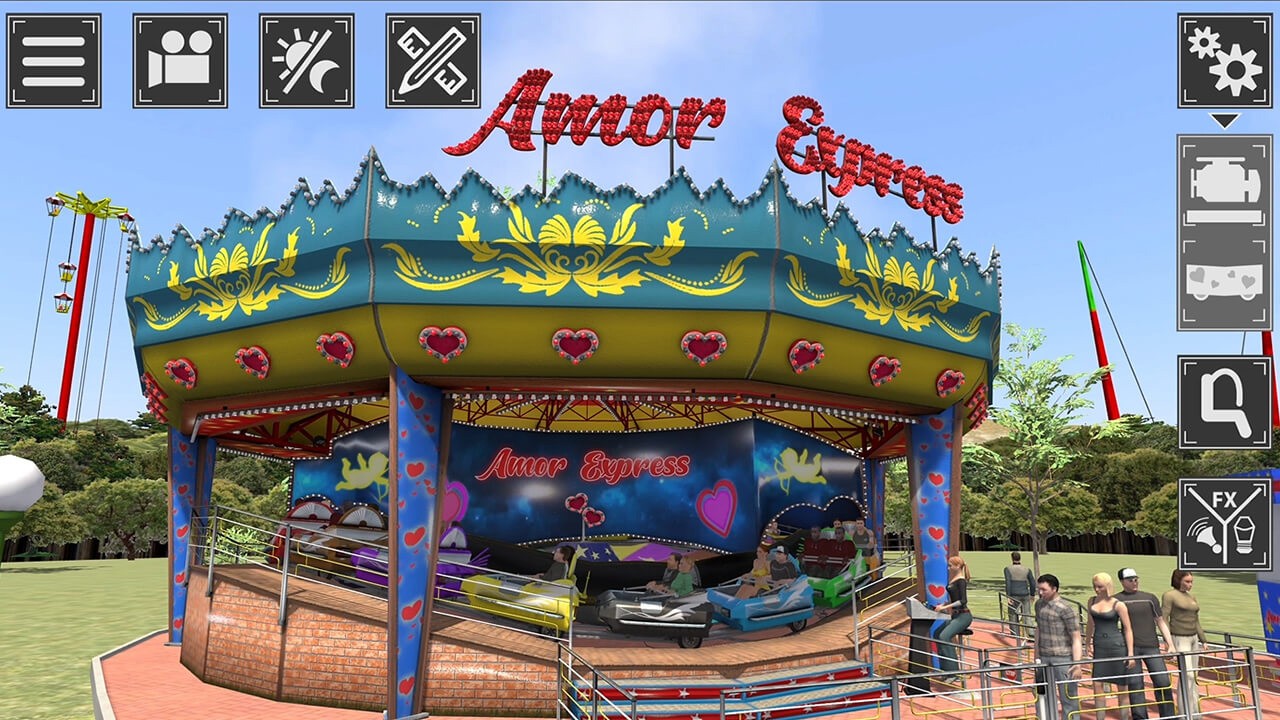 There isn’t really much to talk about in terms of game play. The controls all use the touch screen features of the Nintendo Switch and are fairly self explanatory. Choose your ride and, after loading, it will give you features to open and close the ride queue and vehicle, causing patrons to fill the seats. You can then choose the engine function to control the speed of the ride and the multi-tool to add lights, smoke and other effects to your ride. Some rides also have the ability to control the ride itself, such as riding the dodgems or controlling the tilt of the Tagada which helps to provide some extra distraction.

Graphically, the game is not incredibly taxing. The textures are simple and the art assets nothing to shout home about. There is limited customisation options that essentially resort to removing a facade or including it and the general quality gives the feel you are just running the “on ride” feature of a more popular simulation game. The audio too is a lacklustre experience, with tracks befitting the experience quickly feeling irritating.

The overall experience feels designed for a more niche market than a general gaming audience, but even that niche will find the novelty wears off quickly. The ability to control rides is quite limited to a sliding scale, with a small selection of functions, there is little feedback beyond the noises of the patrons to inform you that what you are doing is fun, nor is there much regard for consequence if poor choices are made, no one complains or falls off a ride if you go too fast for example and the only safety features are that you can’t start the ride if the doors are open. 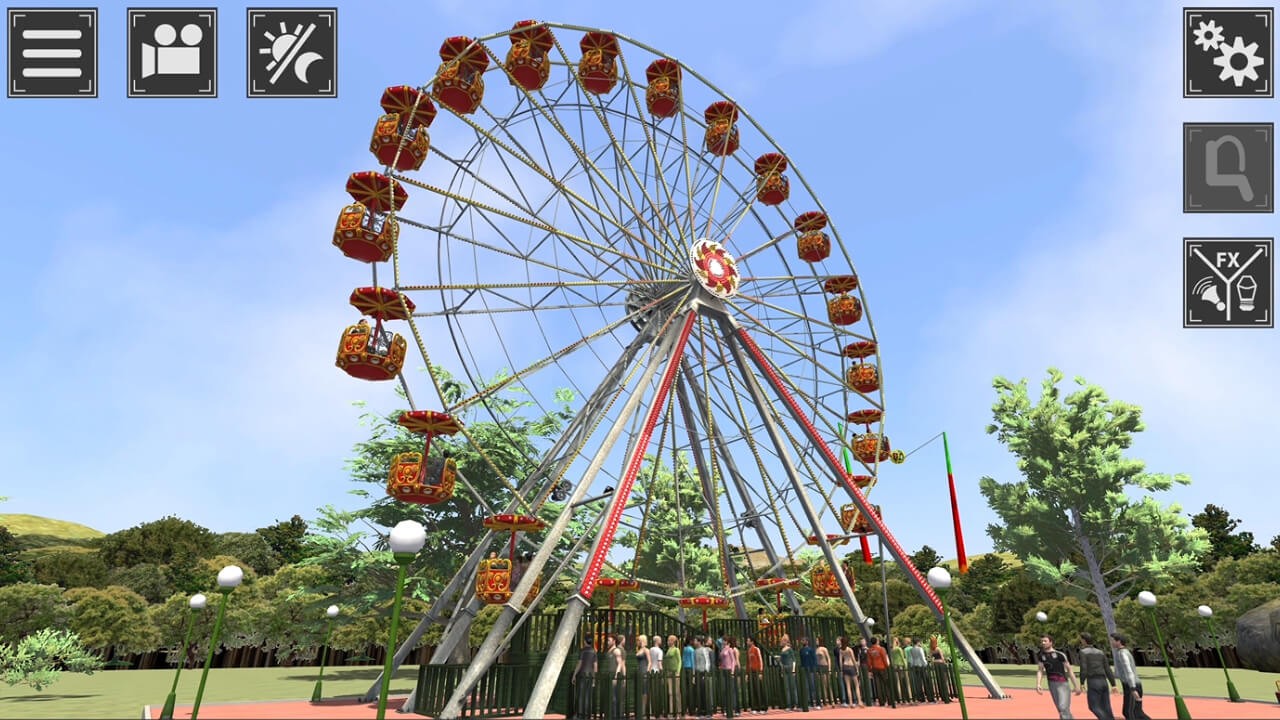 The selection of rides is quite limited also. While there is a considerable quantity of choice, there is little to no variation and very little quality of choice available. For example, the game contains two rollercoasters, one Tokaido style and one Crazy Mouse, but there is no real customisation to make even a uneditable track feel like it is “your” coaster in “your” park. To add to this, the idea that it is a “park” is almost laughable with most rides being C list at best, feeling more at home at a carnival or fun fair than a theme park. To put it into a UK context, the majority of these rides would more likely be seen during a school holiday fun fair with “hook-a-duck” stalls than they would gracing the green parkland of Alton Towers, in fact, some of the rides featured here barely make it onto Alton Tower’s roster when theeing has been added.

The main gripe with the game is that it is clearly advertising itself as something it’s not. Its not a park simulator, its a ride simulator at best. You aren’t simulating the day to day workings of a theme park. You’re a glorified ride attendant, with the added insult of you don’t even get the perks that come with working for a theme park! Even other simulation games have some element of risk and reward, the rides don’t wear down or need maintaining and as mentioned earlier, there is no consequence to you changing settings to the rides detriment, going faster doesn’t make the ride wear down faster or create customer complaints. This game feels like it is attempting to draw in a crowd by its name and create a quick cash grab.

To go back to the reason for taking on this review, while technically there is a rival to Rollercoaster Tycoon in this game, I don’t think anyone will be losing sleep over this.

Theme Park simulation should really have a title change, although this is probably a deliberate  marketing choice. The title is a collection of popular theme park rides with settings to control their operation. There is so little else to say about the game play that calling it a game feels difficult. The graphics don’t show the full capability of the Nintendo Switch and feel like something from an edutainment game from the turn of the century, match that to the audio which, while reminiscent of local fairgrounds, does little to make this an enjoyable experience. Ultimately this is a title for those who like funfair attractions and little else.