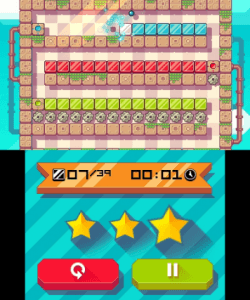 Over time the Nintendo 3DS eShop has become a library for affordable indie puzzle games. Some are good and some are not so good, Cubit being a prime example of an eShop game which really was poor. Fortunately, Hazumi is one of the gems of the Nintendo eShop as well as being worth its small price tag. I would definitely add this to the list of games to buy instead of 3DS Home Themes, or things to buy instead of Cubit (that list being https://www.bonusstage.co.uk/wp-content/uploads/2015/03/Hazumi-Screen-2-250×300.pngvery long). This is very similar to the classic Brick Breaker style of game, but with a few very good additions and twists.

The game consists of just over 100 levels, each one being different and more challenging than its predecessor. In each level a ball bounces up and down, and you control whether it goes left or right. The main aim is to hit the coloured ball to break the corresponding blocks. There are certain blocks that change the colour of your ball so you can break all of the bricks in the level. Along the way you also encounter new obstacles to stop you from completing the level. There are fans which can change the direction of the ball, this isn’t ideal if the direction it points you in is to your inevitable demise. 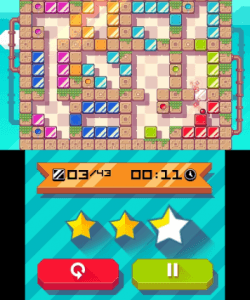 Another factor you have to avoid is gears which destroy you instantly, these are scattered throughout the levels to add an element of difficulty to the game. There are also metal teeth which close and open every few seconds, this forces you to pick the perfect time to pass through. This is all fun enough but there is another entertainment element to this game, stars. Each level has a maximum of three stars you can earn; the stars run out on a time limit. However the time is taken away whenever you destroy a block, meaning you can win stars back.

Stars, as well as being there to prove your skill, help you unlock more levels. Every 4 levels are locked until you gain a certain amount of stars, for every 10 stars you earn you unlock the next set of levels. This sounds easy enough but when you progress onto the more difficult levels, you will find yourself desperately hunting for stars. This for the most part was fun; you gain a sense of relief and achievement after finally conquering that one level you just couldn’t master. This feature also introduces a re-playability factor, as you can go back and collect every star there is to collect.

If all of the above isn’t enough to tickle your interest, then you’ll be pleased to know that Hazumi also includes a level creator. This was a good addition to the game, as it meant you could make levels that were enjoyable as well as challenging.  However, I do have a complaint for this feature. Unlike other games, you weren’t given the option to share your masterpieces. Nor were you able to play other peoples levels, I thought this addition would have really worked well. I can see why it wasn’t included, as for a small team a lot of effort was put into this game as a whole. 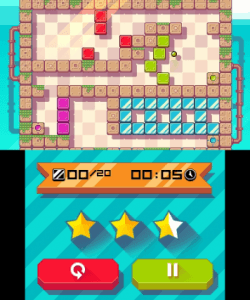 The 3D effect is also perfected; the vibrant colours are good enough but this feature makes it so much more. But playing the whole game in this may grow tiresome, especially if you plan to have a quick Hazumi session on the bus to work. The music also suited the game, but sometimes it may slowly drive you crazy without you realising.

Overall I thought this game was really good, despite the size of EyeCancer’s Team of developers. The gameplay is enjoyable and has so much content to sift through, even when all of the levels are completed half-heartedly. The star system adds an actual goal to the game, but perfectionists should be aware that to get all of them would be very difficult. I would recommend this to anyone who enjoys the odd puzzle from time to time, and for fans of Nintendo eShop treats. Definitely worth it’s price tag!