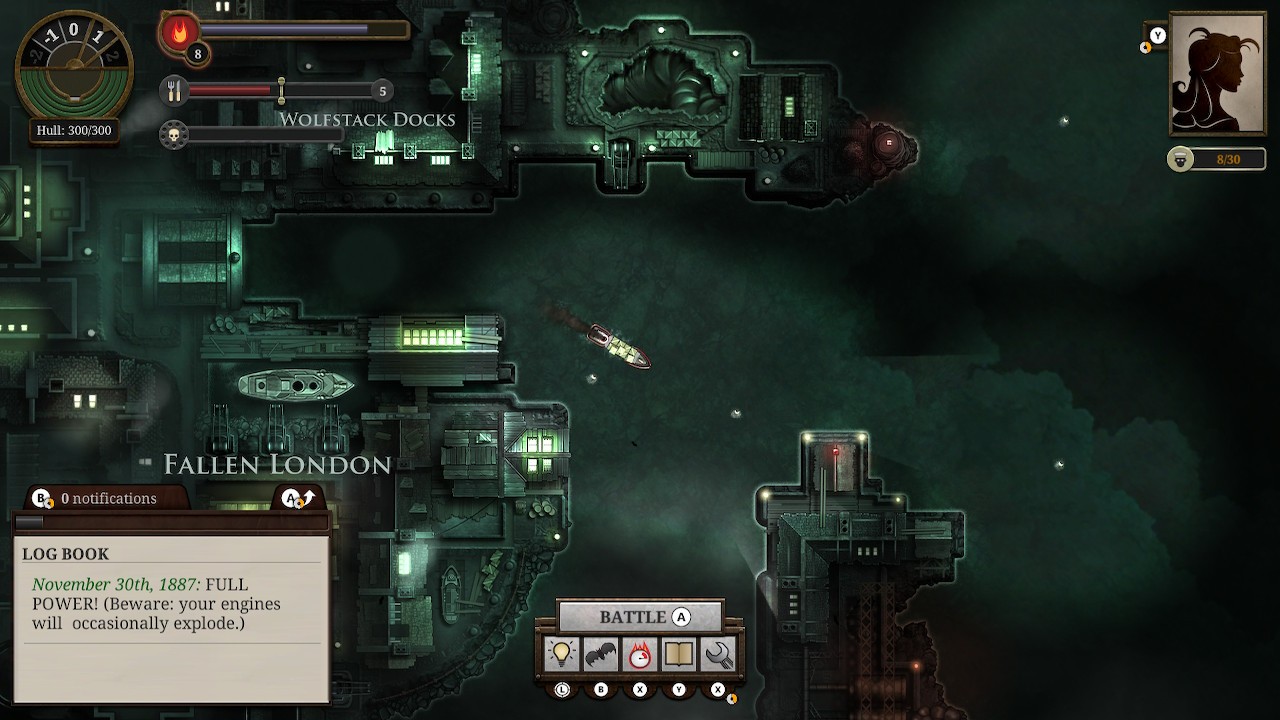 When it comes to the long-term appeal of a video game adventure, in my opinion, there are two variations that determine such a style of play. The first is a sprawling adventure that takes you across different lands and presents an epic story. The second is playing within a smaller setting, yet one that requires you to learn and feel your way through its intricacies. I often find that the bigger epics hold your hand through its journey in order to show you everything that it has to offer, whereas the smaller excursions purposely set you off with no instruction on what to do, or makes you embark on an adventure blindly. Whatever its style, both of these elements can make for some exciting gameplay that makes each title play out over a long-term investment. Sunless Sea: Zubmariner Edition, developed and published by Failbetter Games and Digerati Distribution, is most certainly a game that falls into the latter category as it sets sail for a release upon the Nintendo Switch.

The story takes place in a fictional, steam-punk and Lovecraftian setting of Victorian London. Following the abduction of the capital city by a swarm of bats, London now finds itself within the dark realms of the Neath and, more importantly, lost within the oceans of the Unterzee. Playing as a seafaring captain, or zailor, it is your task to explore this dark and foreboding otherworldly place, taking charge of a sea vessel and setting sail to, not only achieve an ultimate goal, but to also piece together the mysteries and secrets of the Unterzee’s unforgiving ocean. Part roguelike, part survival and part interactive novel, you embark, blindly, through a voyage of discovery and horror.

When I say blindly set sail, I mean, you really, truly do, blindly set sail. The game holds nothing to set you up with what you must do to succeed. Instead, it offers you glimpses of your objectives and touches of hope in how to play the game; choosing to hide its many secrets, ocean layouts and the story that lies ahead. It sets the game up nicely with an air of tension and unknowing, although this in turn, does create a very slow-paced and slow-burning journey that only reveals itself over time, as long as you survive that is. What you do get though, is a choice of starting character; each one having their own personal backstory or objective to achieve. You can be a poet looking for inspiration or a lost son on a cause to recover your father’s bones; as well as a few select more. 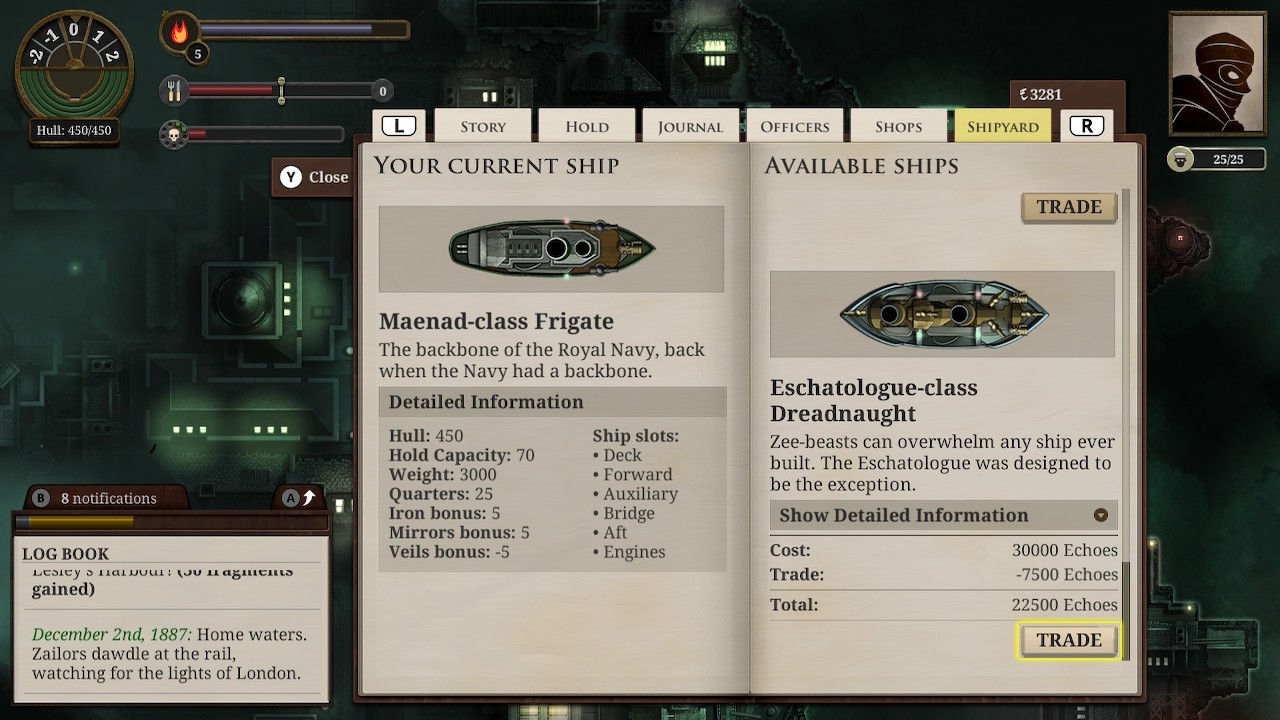 Your choices are presented in the style of a novel, with a page of effective descriptives and a number of choices to determine your fate or path. In fact, this is a game that is very heavy with its textual narratives, which can, at first, be very disorientating. However, the narrative provides a very effective backdrop for your story; one that involves just as much imagination as it does reading. Some may find it a bit heavy, especially if you’re not into reading, but stick with it and it soon becomes a story that opens its pages and reveals a dark and foreboding adventure that begs to be explored. Once your choice of captain is made, you then commandeer a small, sailing vessel, as well as pick up a few tasks with which to set sail.

The game does all of this with no tutorial or idea on what you are supposed to do, how to control your vessel or where you are supposed to navigate to. Sure, you’ve got an objective and a name of port you need to sail to, but the ocean map is hidden until discovered and certain controls only reveal themselves when needed. It creates a need for a cautious approach and it’s in this style that the whole game needs to be approached; whence its very deliberate slow pacing. Sail into the unknown and you’ll meet your demise for sure. In fact, if you’re not careful, you’ll meet your maker many times before anything begins to make any sense to you. But don’t let that detract you from what awaits within this journey.

The game holds many elements that need to be adhered to in order to succeed. However, should you fail and you will, there are also mechanics that work in your favour; allowing you to delve deeper and explore further. With its slow-pacing, the majority of your starting play will be seeking out what ports lie in your immediate area, flitting between each of them as you complete a series of side tasks. This allows you to uncover areas of the map gradually, but also provides a life-line with a number of ports in which you can rest and stock up on much needed supplies. This is key to the survival aspect of the game, ensuring your crew and vessel are catered for. Stray too far or run out of food, and your crew will mutiny or succumb to madness and even cannibalism. Run out of fuel, and your ship will be left stranded; death will soon follow. 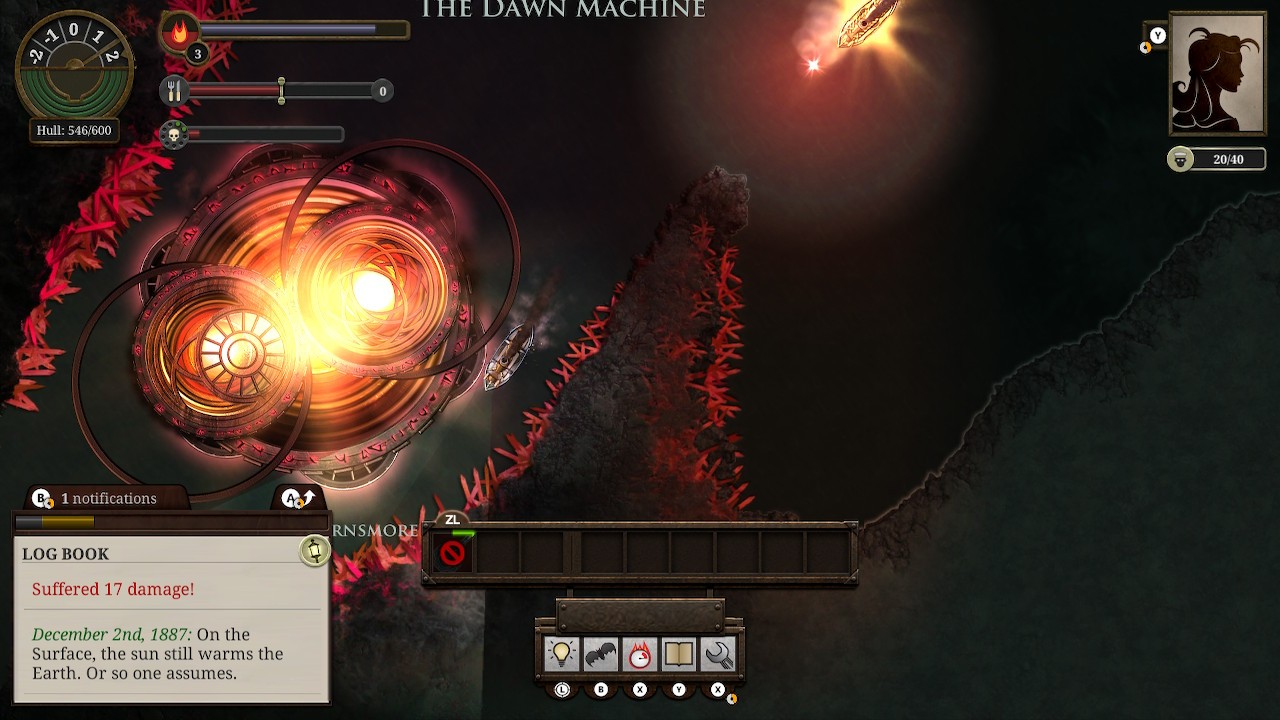 Should your captain die, then the game allows you to pick another one. However, you are also presented with a number of choices, some of which can lead to hanging on to your accrued currency or keeping a valuable crew member, others can see you retain your ship or seeing the discovered areas of your map remain. Should you start a new journey though, then the layout of the ocean changes, although many of the story elements do remain. With each death, you build upon with each new adventure, gaining knowledge or strength to better prepare you or explore further. Remaining alive also grants strength, allowing you to trade at different ports and ultimately, upgrading your ship or buying a new one; even submerging to the depths with a submersible craft with the game’s bundled underwater expansion.

This too becomes an important element as you  travel further into the dark expanses or come across pirates or monsters that need to be fought. Explore too fast, too soon and you’ll come across foes that you simply can’t match. Build yourself slowly though, and you revel at what you discover and reveal. It’s through this steady building, that the game begins to open up; both within its exploration and narrative. A number of stories rise to the surface and soon they begin to fit together and make sense, whilst your crew and vessel grow ever stronger and daring; but only through clever captainship. Although starting a new journey brings extra elements, you do have to start from scratch again which, for some people, may be a frustrating prospect.

Overall, Sunless Sea: Zubmariner Edition is a slow-paced roguelike that demands attention. The more you put into it, the more you learn and ultimately, the more you get out of it. In may way, it is a very difficult game to get to grips with, but once you do, it’ll be hard to let go. It’s pacing and heavy reading won’t be for everyone, but if you’re in the market for a game that can be played at a casual pace and holds a great deal of long-term value, then you’ll find a compelling adventure throughout its murky waters and effective story-telling. It rewards you for sticking with it, even through death, forcing you to carry on its journey into the unknown. In many ways,  it’s a very unique game and a thinking man’s pleasure. If you’ve got the brains and the brawn, this is a title that will satisfy for a long time to come.

A unique, but slow-paced roguelike that requires brains and brawn to light up the Sunless Sea: Zubmariner Edition.