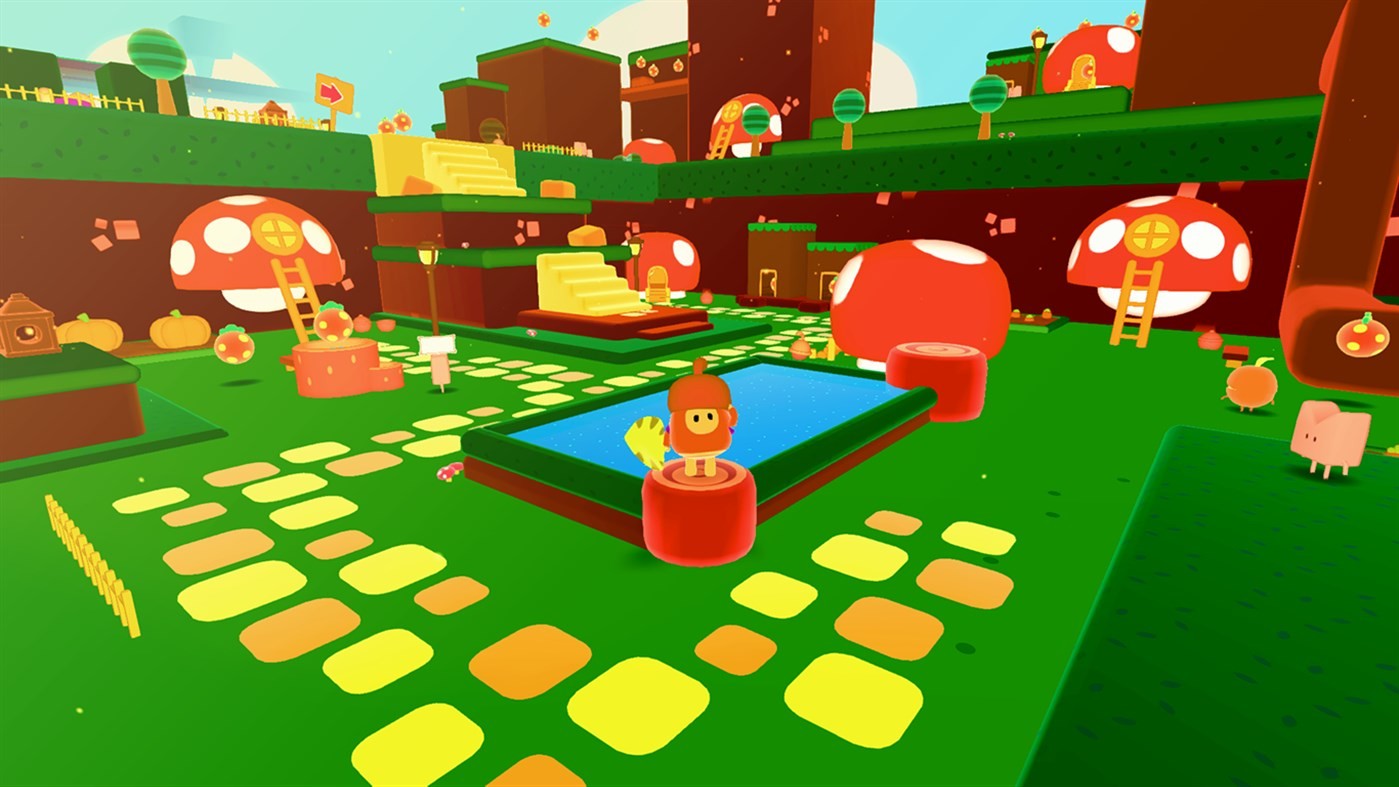 The last few years have seen something of a resurgence in the puzzle-platform style of gaming that was so popular in the 80s and 90s, with somewhat mixed results. Woodle Tree 2: Deluxe+ is another contender to enter this ring and, unfortunately, it rather misses the mark.

As with all old-school platformers, the story of Woodle Tree 2 is paper-thin. During the opening cinematic, the Wood Lands are invaded by shadowy monsters who steal three Water Tears from each of the eight Sage Trees and hide them across the game world for reasons unknown. The player character, an anthropomorphised tree stump called Woodle, is summarily tasked with retrieving the Tears and returning life to the Sages, saving the world in the process. Players go through a relatively short tutorial level to find the first three Tears, before being left to freely roam the map at their leisure.

This lack of narrative is hardly unique to Woodle Tree 2 among platform games, but here it feels particularly flimsy. In part, this is thanks to the total lack of characterisation anyone receives: Woodle himself doesn’t speak at all beyond the occasional grunt made when he jumps, and only a handful of woodland inhabitants have anything to ‘say’ when you visit them, all of which is communicated via written dialogue boxes. While I certainly don’t think the experience would have been enhanced with voice acting, the total lack of two-way dialogue makes the game seem more like a museum you’re exploring rather than an actual world worth trying to save.

Similarly, there’s no substance to the enemies you’ll face throughout the game. Woodle Tree 2 doesn’t have a primary antagonist; instead, you’ll be continually fighting off small shadow minions to steal back the Water Tears without really advancing towards any particular story goal. As a result, retrieving the Tears feels more like busywork designed to give you something to do while you’re playing, as opposed to an actual objective that will achieve something for the character you’re inhabiting. A game doesn’t necessarily need a detailed or intricate story to be a worthwhile time investment, but Woodle Tree 2 has so little driving force that, after a couple of hours, it can be difficult to find any incentive to keep playing.

Adding to the lack of story is the absence of any character progression. Woodle Tree 2 advertises itself as a platformer with ‘RPG elements’, a title that refers to your ability to buy new equipment and abilities using berries you find around the map. The problem is that all of these upgrades become available to you at the beginning of the game as items in ‘shops’, with the only restriction being their cost. This means that you could, for example, buy the 2nd level of leaf – the item that allows you to jump and glide, and acts as your weapon – early on for a low price, or simply wait a little longer to save up for the most powerful upgrade in the game. The result is that instead of a gradual progression where you can work towards the next upgrade and unlock new areas of the game over time, you can go directly from your starting abilities to the most advanced move-set in a single step. Coupled with the fact that you don’t actually need any upgrades to reach almost anywhere and you can go wherever you please as soon as you complete the tutorial, there aren’t any secondary goals to strive for beyond collecting the Tears. 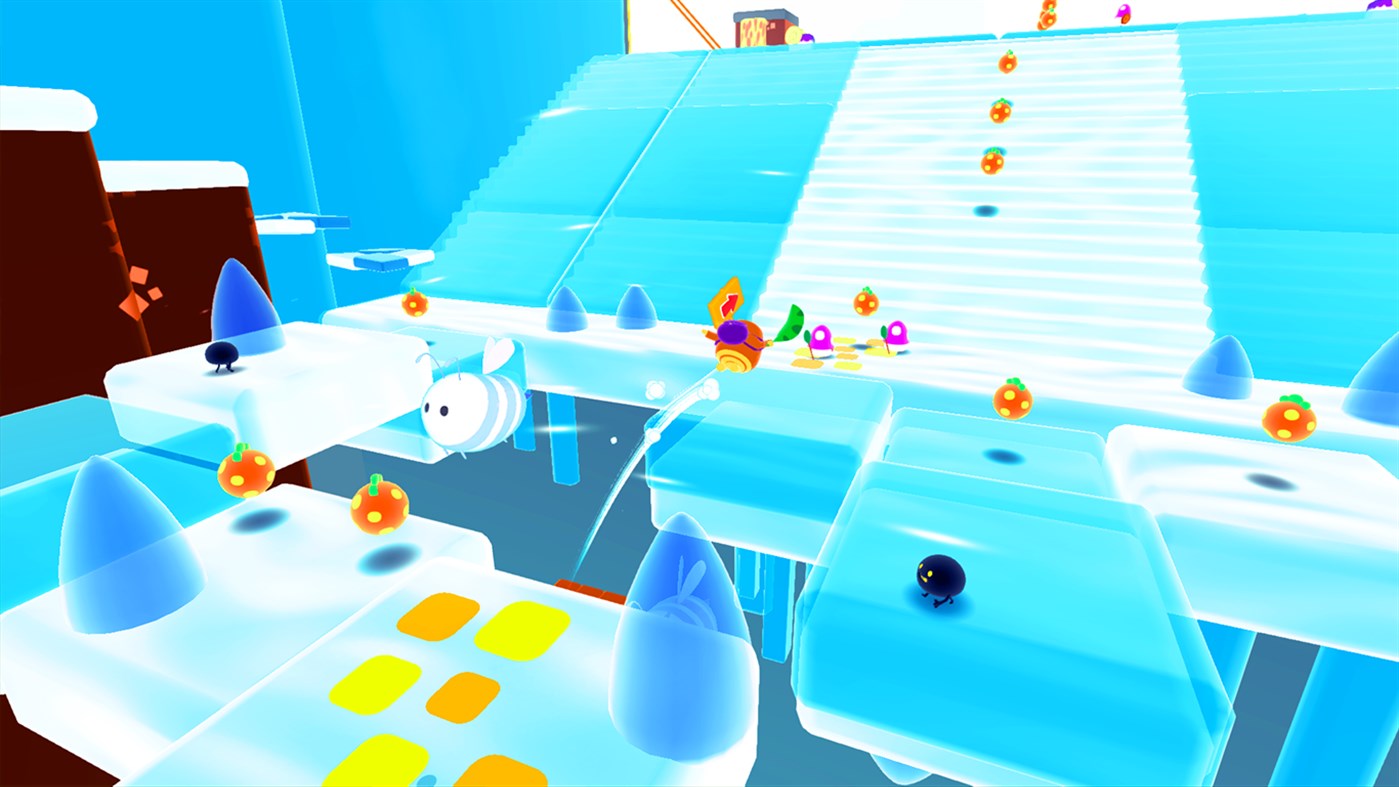 These faults should not necessarily be fatal for Woodle Tree 2 – the focus of a platformer game has always been the gameplay itself rather than the story. Unfortunately, however, there’s not much to recommend the game in this regard either. Your primary interaction with the game is trying to make precise jumps at specific times, but the controls aren’t accurate enough to reliably facilitate that; I found that I could rarely accurately predict the length of my jump or the distance between Woodle and a platform, and even when I could, the floaty movement of the character made it difficult to land where I wanted to. I also found that the controls consistently failed if I was trying to jump near a wall, automatically forcing me into a wall jump even when that wasn’t what I was asking it to do.

While it could be argued that these controls have been designed like this to add a layer of difficulty to the game, it never felt like a fair challenge. Some of the levels are genuinely hard to navigate because they’ve been carefully designed to be that way; adding artificial difficulty by ignoring what I was asking the game to do always felt cheap and made certain sections of the game tremendously frustrating to get through.

One feature, in particular, to fall into this trap was the spiral plants you can grow by giving them a drop of water; these have been designed in such a way that it appears you can walk up them like a spiral staircase, but in my experience trying to climb them made for some of the most challenging platforming in the entire game, with Woodle perpetually sliding back down or falling despite my best efforts. Over several hours of gameplay, I spent more time trying to climb up a single one of these plants than on any other platforming challenge I came across.

Combat controls suffer from the same frustrating unreliability. Woodle has two primary attacks: a simple melee hit, and a charged ranged attack that throws a drop of water straight ahead of where he’s pointing. While I had no trouble at all with the melee attack, the ranged option was so hopeless to aim accurately that I only ever used it in the Flower Dream challenges that demanded it. 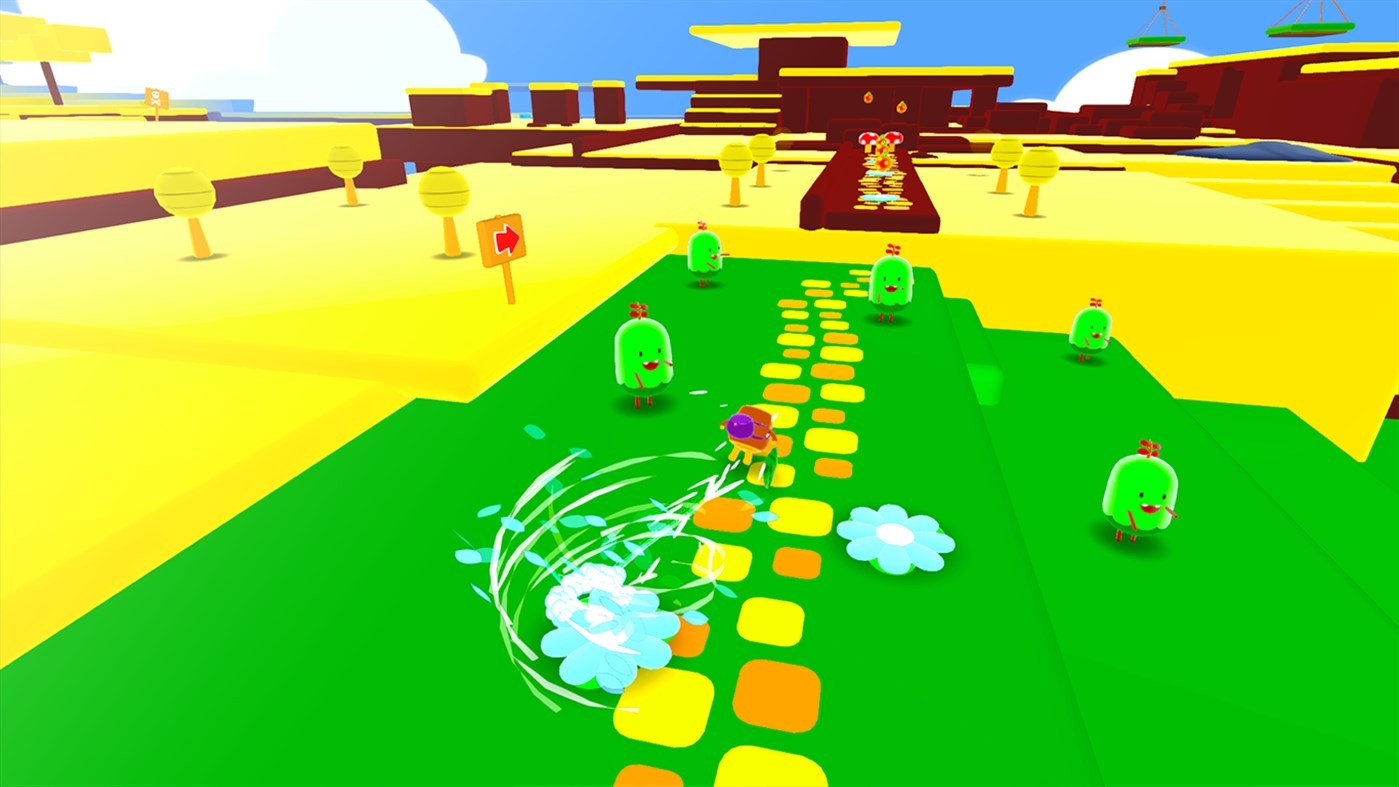 It’s possible that these problems in the control scheme are the result of rushed development, something which is backed up by the range of bugs and glitches I came across. The spiral plants are one such issue, but there are several others that more severely impact the game. A few of these I only came across once or twice, such as the game crashing entirely on a loading screen or it mistakenly thinking I was wading through long grass when I wasn’t, significantly dropping both my movement speed and jumping ability, but others cropped up more often, most notably one that would kill me for no reason a few seconds after I stepped off a teleport point. The worst of these were resolved without further issue by restarting the game, but they acted as constant interruptions to a game that already struggles to be inviting.

Likewise, the vast empty spaces between the self-contained regions of the game world feel like missed potential that was intended to hold more varied content. The map is huge and exploring it can uncover interesting secrets, but with very little to do in large parts of it and the landscape never varying from differently sized square blocks, you’re not encouraged to spend any extended time wandering around the world.

All of this isn’t to say that there’s nothing to like about Woodle Tree 2; a lot of work has clearly gone into its presentation and it’s time that has been well spent. The art style is wonderfully charming, with Woodle and his friends rendered in delightful cartoonish avatars and the aesthetics of the different regions unique enough to make exploring them feel varied despite the lack of changing landscape texture. Even better, the true victory of this game is its soundtrack, emulating the old style of platforming games in a way that brilliantly triggers any nostalgia you may have for older titles while remaining so genuinely pleasing to listen to that new players will have plenty to enjoy too. In a game where almost nothing else made me want to keep playing, I found myself returning just to enjoy the soothing music at the end of a long day.

Woodle Tree 2: Deluxe+ is not without its charms, and it’s clear that the developers have poured a lot of time and affection into the title, but sadly I think it still needs a lot of work before it’s a game I’ll want to play again.

While Woodle Tree 2: Deluxe+ has some fantastic presentation in its visuals and soundtrack, the poor control system, glitches, and lack of driving force to complete the game make this a title which is easy to bounce right off.