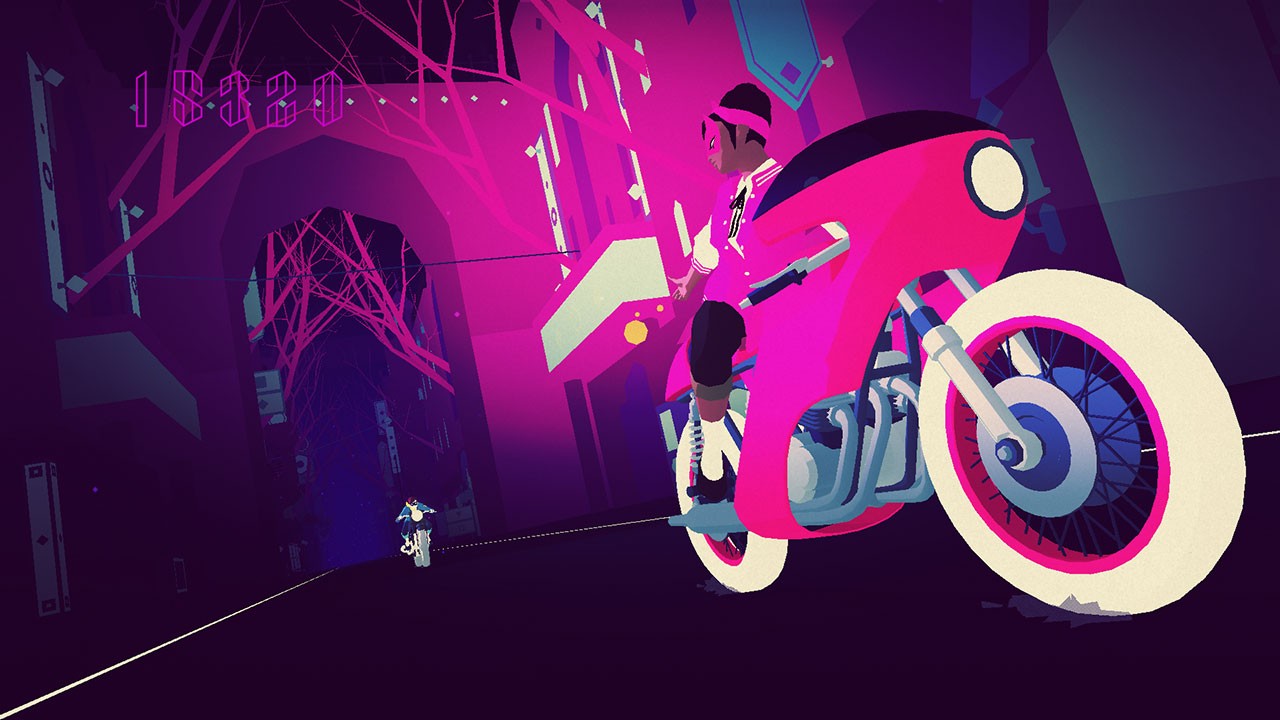 It’s quite unusual for a rhythm game to feel so fluid and interactive as Sayonara Wild Hearts, that it’s slightly changed my opinion on the genre. I had seen a few screenshots and made a mental note to take some time for it when available, but when there are so many games out, a few weeks turn to months and then almost forgotten. Available on the Switch. This was my chance to review it and see if it was worth the wait, even if it had been forgotten.

Screenshots can’t do a game justice – even watching a YouTube video would be the same as you need to play the games for yourself. At least with moving images, you get the gist though, as the static images for Sayonara Wild Hearts doesn’t prepare you for the experience. Not knowing anything about the game, I had no expectations. It could go either way.

Beginning a bit like a cyberpunk promo or perhaps one of those fan videos you see on YouTube accompanied by some synthwave or similar, it became immediately clear that this game was like playing an interactive music video. It’s highly stylised with a cyberpunk feel, that is, a blend of neon purples, futuristic landscapes that flirt with present-day scenes and a fantastic soundtrack. Maybe that’s just me on the soundtrack side of things, but the genre is full of top quality beats and synths. 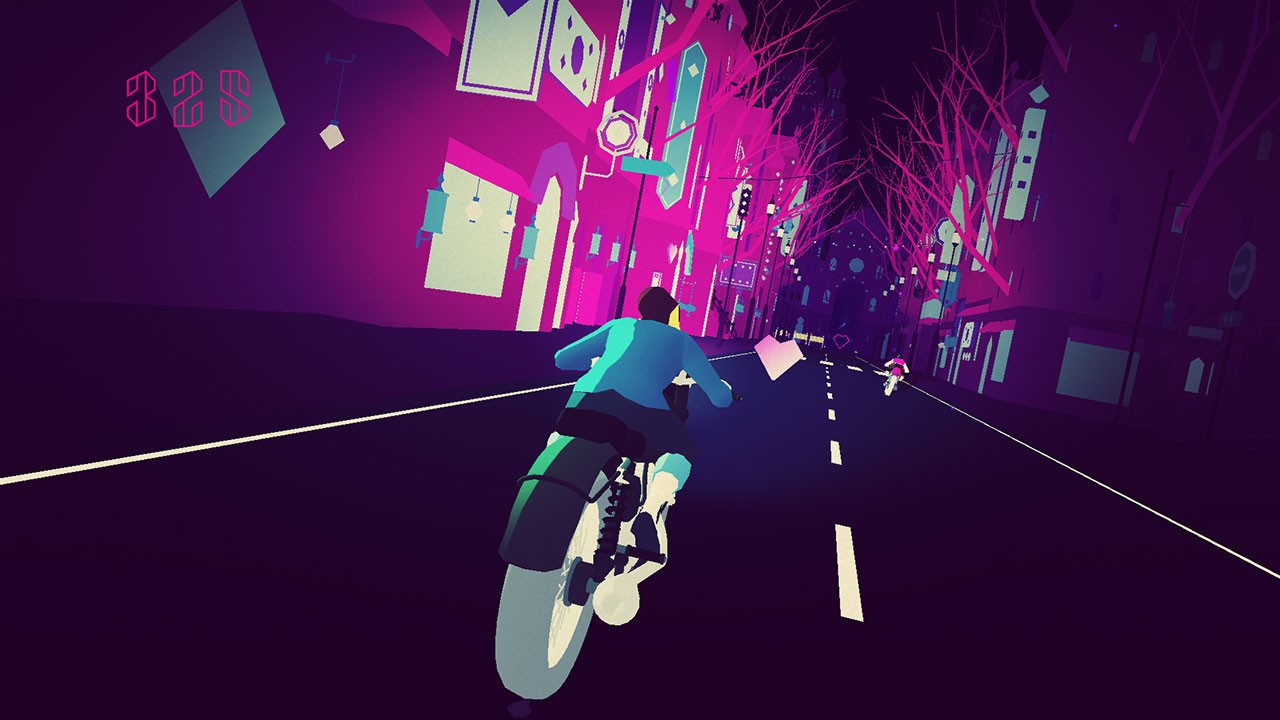 The game follows a loose story of the protagonist having their heart broken, and you follow their path that evolves from skateboarding and motorbikes to QTE, to side-scrolling chase scenes. Despite having roots in the rhythm genre, Sayonara Wild Hearts is less rigid than its peers, and it feels more organic, and movement is fluid. Most of the gameplay involves collecting a series of hearts for a hi-score and subsequent ranking at the end of each level.

This usually means lane-changing with whatever form of transport you’re using, or, occasionally, when you’re flying through the sky. Though the momentum is about going forward, you have a bit of freedom in how you play the game, though at a sacrifice of getting more points. You aren’t here for sightseeing, but the presentation is sometimes minimal, other times quite built up, but always beautiful that you don’t mind occasionally respawning because you hit a wall due to admiring the gorgeous visuals.

While you can’t die as such, you can have your progress stunted by said crashes – i.e., not moving in time to fit between an alley or falling down a chasm. You respawn not too far away to repeat it, but chances are your rank will start to deteriorate. If you continually fail a section, the game allows you to skip it, should you wish, giving a bit more freedom to finish the short story with little stress. The game isn’t particularly hard as such; it’s more to do with timing and getting as many points as possible through collecting hearts, or getting perfects on the QTE when you fight the enemies in the game. 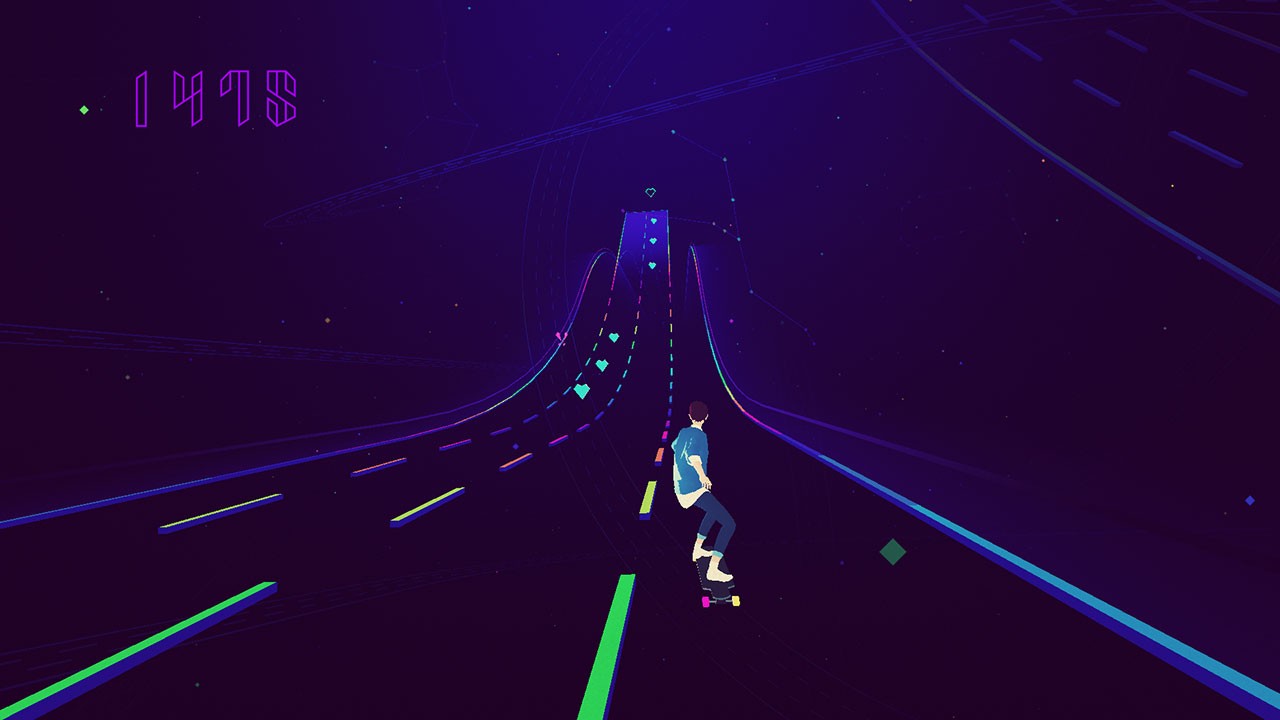 The visuals in the game are brilliant, and they’re complemented perfectly with the soundtrack. Beginning with a classical piece, most of the tracks are synth-based instrumentals with the occasional vocals. While the theme is heartbreak, the songs don’t feel melancholy, but they’re not particularly upbeat or will have you humming along irritatingly. On the irritating side of things, I had a moment when my controls were experiencing drift – unrelated to the game.

Still, as I kept failing a section, the track wouldn’t carry off where the song abruptly ended, but as a marker from the respawn point and the same vocal section was played back again and again. It’s not a big deal as I could have paused the game, and this was the only moment where I had to repeat too many times, but if you’re not so good at games, the vocal tracks might grate for you a little. That said, the game can easily be completed in one sitting. I don’t recall how long it took me, but I’d say you could watch an average length film at the same time, if not less.

Overall, Sayonara Wild Hearts is a vibrant, positive experience. The swift movement of your character is just right. The game doesn’t pose many difficulties so can appeal to a broader audience, but the option to unlock better rankings could appeal. Just for the gawking at the visuals or listening to the music, it justifies repeat plays, and as mentioned, it’s a short game, so this could be your commute game, killing two birds with one stone; a game to pass the time and a brilliant soundtrack to either kickstart your day, or even wind things down, depending on your mood.

A bit like a mobile game through its simple design and short duration, Sayonara Wild Hearts is a vivid title that marries presentation and gameplay pretty well to produce a memorable experience. Just expect to finish it one sitting, regardless of your ability.