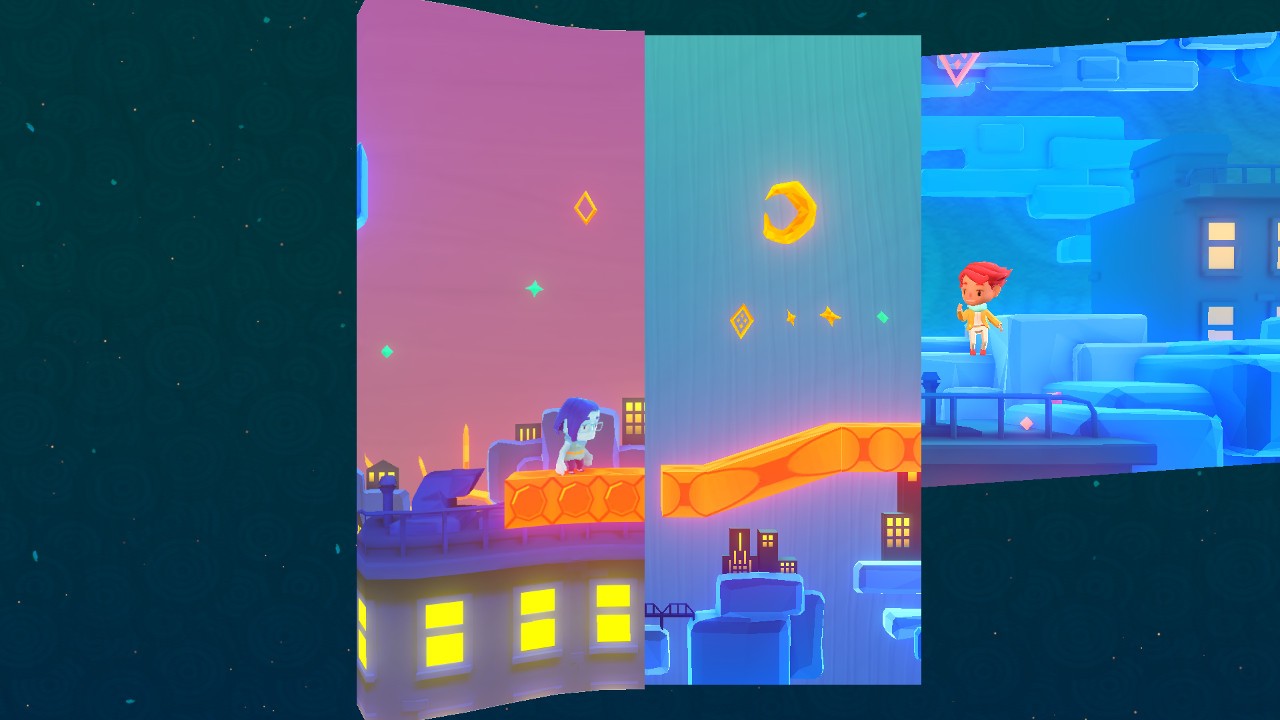 We all have our favourite commercials, and while this isn’t the BBC, let’s not give free promos to washing detergent manufacturers on a gaming site but…. A Fold Apart’s artistic style reminds me of a combination of the Comfort adverts mixed with Pixar’s Inside Out characters. Quite the compliment then, as both designs are held in high regard. Perhaps I’m bigging it up a bit too much, but that’s the vibe I got. Equally, the tone is mildly on par as well.

Much like another Pixar title, Up, A Fold Apart begins by you choosing two characters from a choice of four Polaroids. A sequence promptly follows that tells a fast-moving story between the two and their love, which, you guessed it, drifts apart for several reasons. This plot device is relatively literal in its approach – one character is square-like and rigid, and their story is represented by blue, the other is a lot more contoured and has orange as their colour. The two are opposite, but opposites attract <yawn>, and they’re made for one another. Don’t feel my yawn is dismissive; on paper, this sounds like a bore, but A Fold Apart is quite charming.

After the intro sequence, your lovebirds are split up, but the ‘firey’ one comes visits and has a surprise for you. Queue your entry into this 2D/3D fusion which is an evolution of Paper Mario. The characters themselves are 3D, but as you take control of your character with the left stick, you’ll encounter puzzles along the way that are solved by flipping the scenery – in this case, paper, by pressing either the L or R buttons. It transpires that the character you play is an architect – quite the coincidence then as you’re manipulating the environments around you to get to each goal, but later you play the other character, a teacher. There’s no conventional platforming action – that is, no jumping here there and everywhere, but aesthetically speaking, on the surface, it appears to be a well-presented title from the genre. 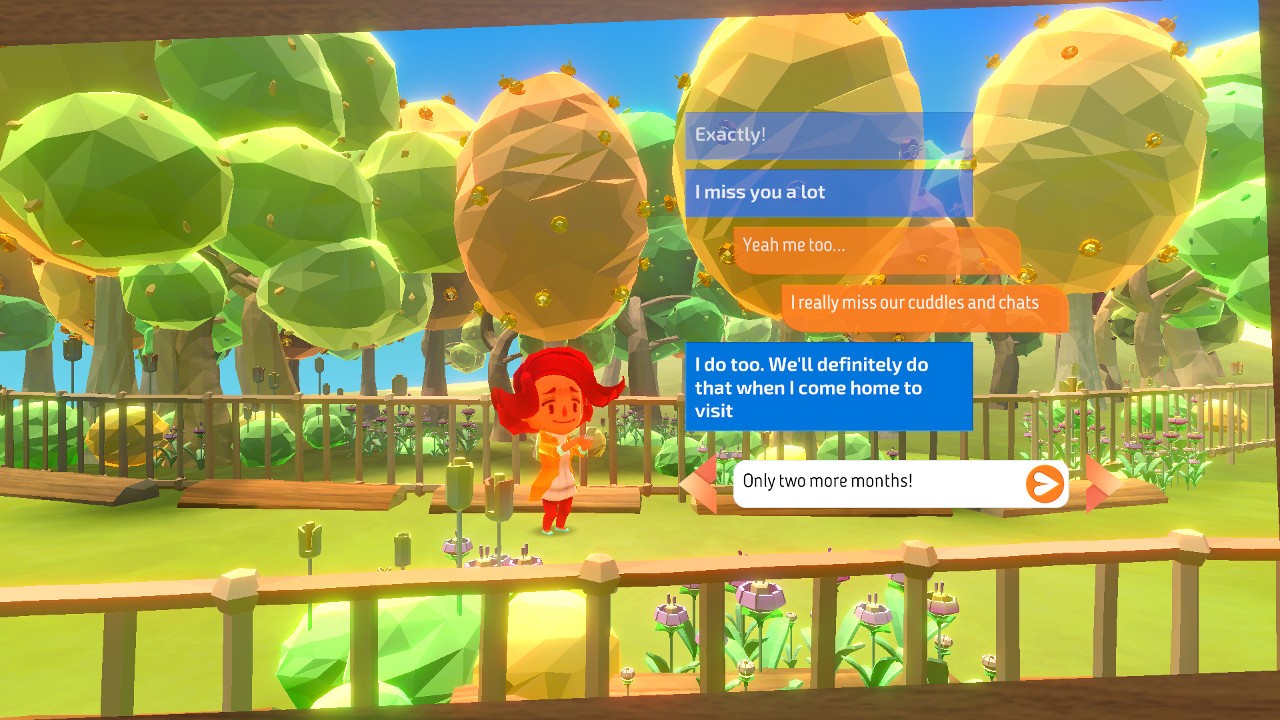 Instead, you use your environment to your advantage by folding the paper with the right analogue stick; the paper behind the layer you occupy having another scene on it that may be able to help you progress. It’s a little like Old Man’s Journey – an innovative way to make use of your surroundings in a relatively intuitive way, without it being too taxing. The music assists with that as, throughout, it’s almost like a lullaby – not putting you to sleep, but ensuring that you’re calm and relaxed throughout and solving the puzzles feel secondary to the overall experience. Mostly though, you’re following your loved one through a sequence, collecting stars along the way. This process then switches as you play the other party.

There’s no spoken dialogue, but the text appears over the screen for you to read as you go along. It’s a pleasant font, but it can be a little distracting to read through gameplay, or it merges a bit with the background that you have to move your character to make out the odd word or two. It’s nothing major, but it looks like a choice that was made for appearances more than in practice. That said, it’s a better font that having a black overlay with comic sans invading the screen. Everything in A Fold Apart is somewhat magical and storybook-like, and I have to say, while the gameplay is good and all, the visuals are excellent.

I honestly haven’t seen anything like A Fold Apart. The concept of folding back paper to reach new areas was a delight. There wasn’t much challenge in the game for some time and could be completed at the same pace that the characters walk. Granted, the story plays an important part, and while it’s a touching one about a long-distance relationship, the actual gameplay felt a little too easy in places that it’s almost like flicking through the storybooks that A Fold Apart emulates. Then it takes a sudden turn, and the puzzles increase in intensity as you can fold the screen in multiple directions, along with various obstacles that get in the way. On top of that, there were two occasions where the game would freeze, and despite trying everything from switching controllers to standing on one’s head reciting the alphabet backwards, I would have to exit out of the game and go back in. Not ideal, but a testament that the game already had me won over and after these little issues, was able to enjoy the game once more. 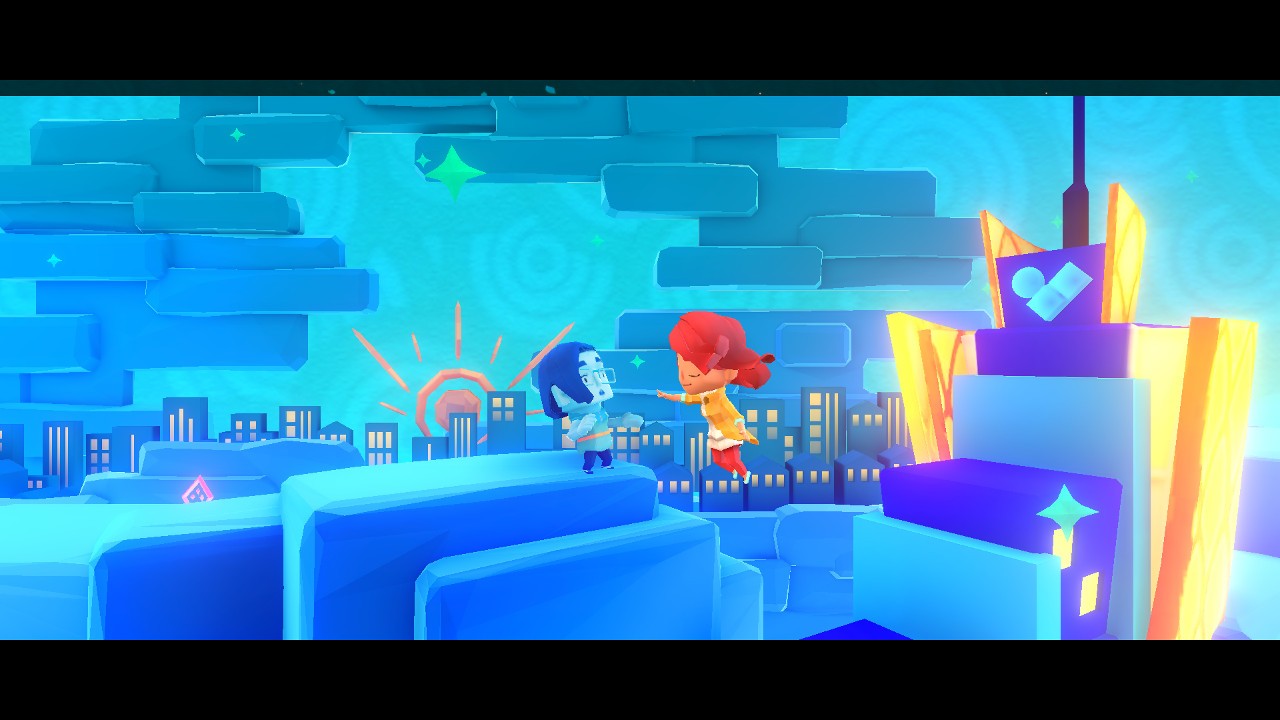 The pacing of the game is usually on point, but it does slow down in places, not where it necessarily drags, but enough to lose momentum. The duration of the game isn’t long enough that A Fold Apart becomes a chore and if the title appeals to you from the outset, you’re likely to hang around until the conclusion of the story.

Wrapped in metaphors and exploring the classic long-distance relationship, A Fold Apart is a delightful tale that utilises some nifty techniques that you are unlikely to have experienced before. It reels you in enough to think you’ve got a grasp of it, only to have your problem-solving skills challenge later on. The story is lovely and the emphasis again on the presentation – both visually and the heartwarming soundtrack.

One for the puzzle fans who want to slow things down a bit, without the fear of being stumped for too long, but enough challenge to be worthy of sticking to the end. A Fold Apart feels like a Pixar short in many respects and certainly something you should consider if any of these themes appeal to you.